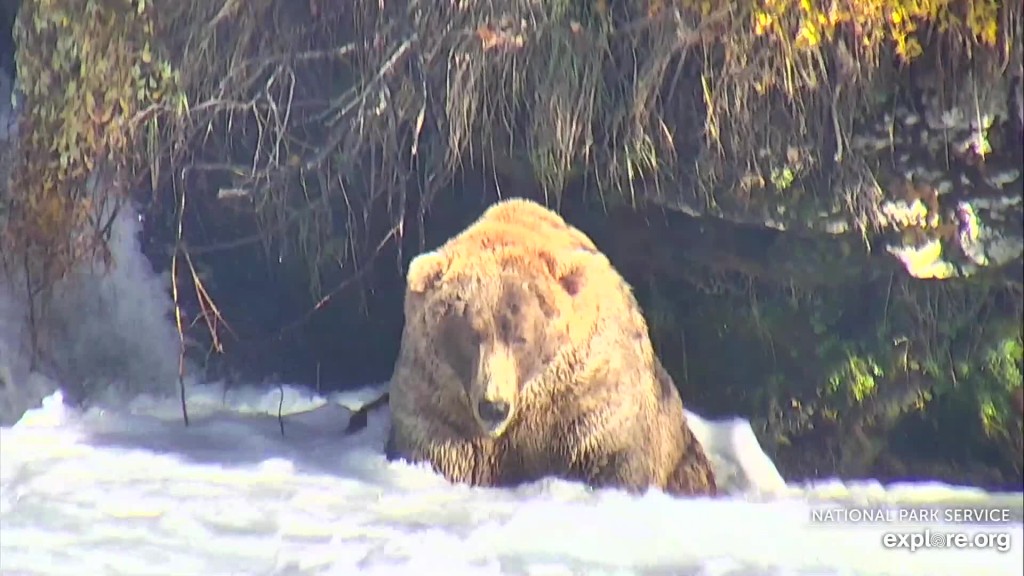 480 Otis in his office Snapshot by CamOp Nan

Most bears disperse away from Brooks River by mid October as salmon become less and less abundant, according to a comment by Mike Fitz.  We are certainly seeing that trend with bear sightings at the falls and riffles area. We saw only 3 adult male bears this week and one sow with cubs.  Most of our sightings have been subadults. Mike’s comment continued:

“The peak of the sockeye spawning season is September so with each passing day, there are fewer salmon in the river. We can still see bears at the river well into November, just a lot fewer of them. The bears who have departed may try to find another place to fish, but Brooks River is one of the last places where bears can find salmon this late in the year. I suspect when bears leave the river in October, many of them are beginning their slow journey toward their denning area.”

Read about bear hibernation in this blog by Mike Fitz.

Even though we did not see a lot of bears, we did note that there were still salmon attempting to jump the falls!   Here are Mike’s thoughts on this:

“…..From what I’ve seen on the falls cam so far this month, while there are lots of salmon jumping they are not making the leap successfully. They appear to be mostly sockeye, so they probably lack the energy to make the jump at this stage in their lives. My suspicion is that they are fish who are looking for the right place to spawn near the falls. I also suspect that the large escapement in the Naknek River watershed has influenced the behavior of salmon below the falls. Maybe spawning conditions downstream of the falls are crowded enough that some salmon would like to find more room upstream.” 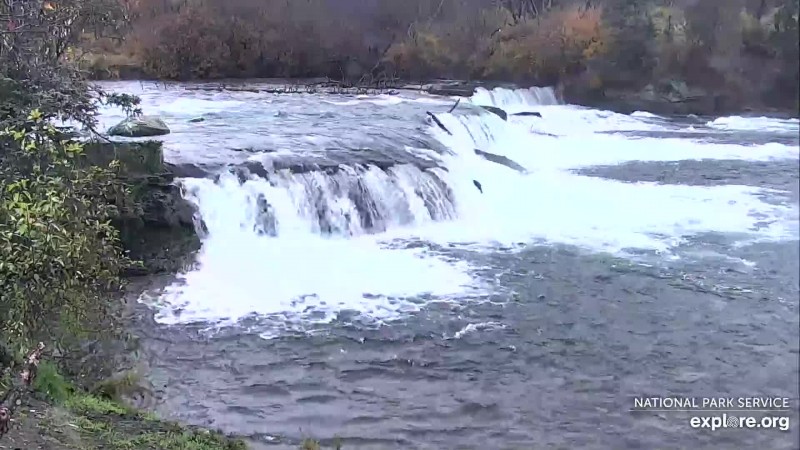 274 Overflow was seen near the falls earlier this week. 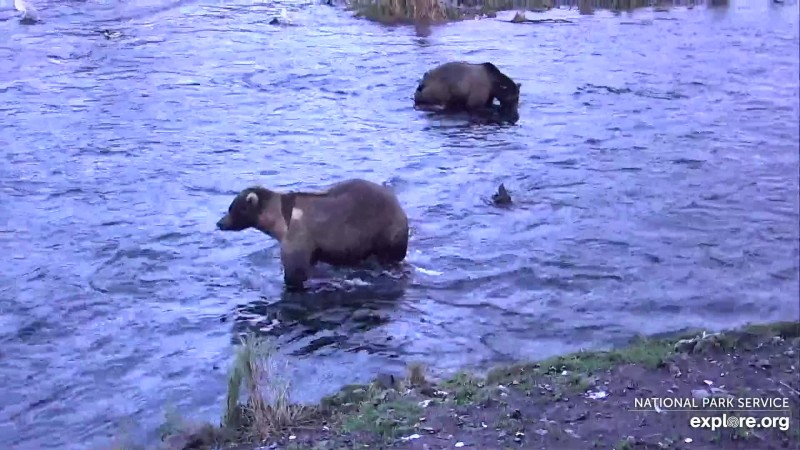 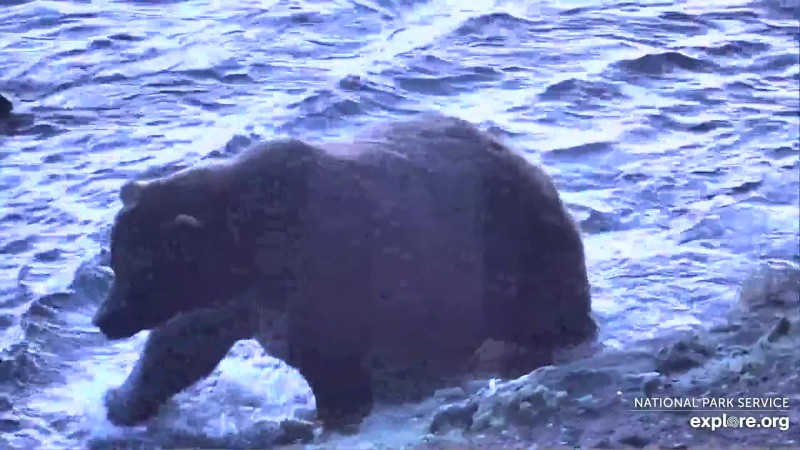 480 Otis was fishing below the falls just about every day until October 13. He seemed to gain weight before our eyes, looking much bigger now than when he was scanned in September and when the photos for the Fat Bear Contest were taken.  He could have been gaining 2-4 pounds per day! His time at the falls was quite successful. He was catching a lot of salmon in his office and in the jacuzzi. 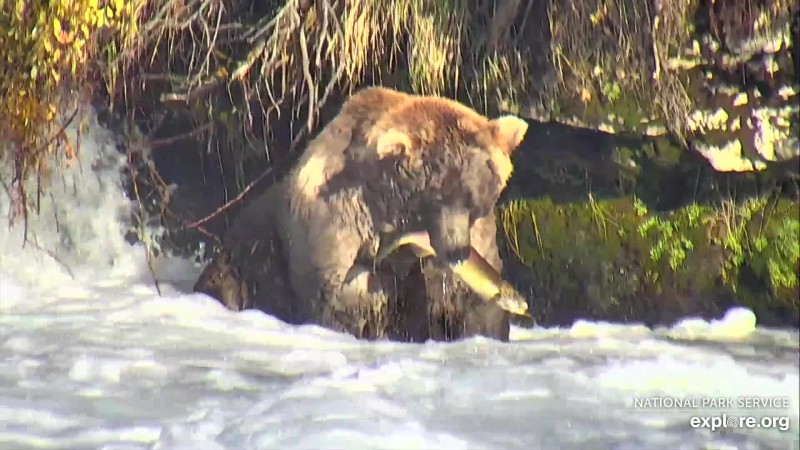 480 Otis with a nice catch Snapshot by merry_mermaid

Sometimes he had the falls to himself, but often there were a number of subadults around him looking to catch a fish, pick up scraps, or in the case of these two play. The other adult bear seen this week was sow 402 with her three yearling cubs.  They made a couple of appearances on the falls and riffles cams. The 3 cubs that looked so skinny in early summer are now fat and sporting thick winter coats. 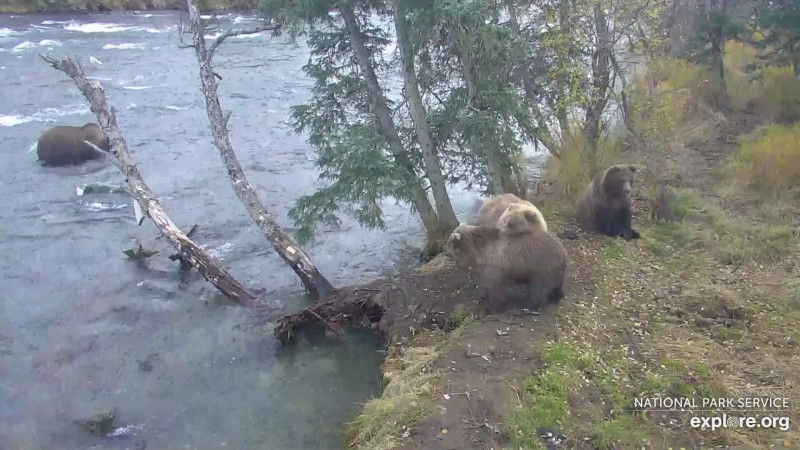 402 and her cubs in the riffles Snapshot by Duska

402 again showed her diving skills during one visit to the falls.  She is quite a good diving bear and disappeared into the depths of the jacuzzi in search of fish.  She wasn’t successful this time, but often she is successful with this fishing technique. You can read and watch more about 402’s diving – as well as that of other bears who have been seen diving – at this link 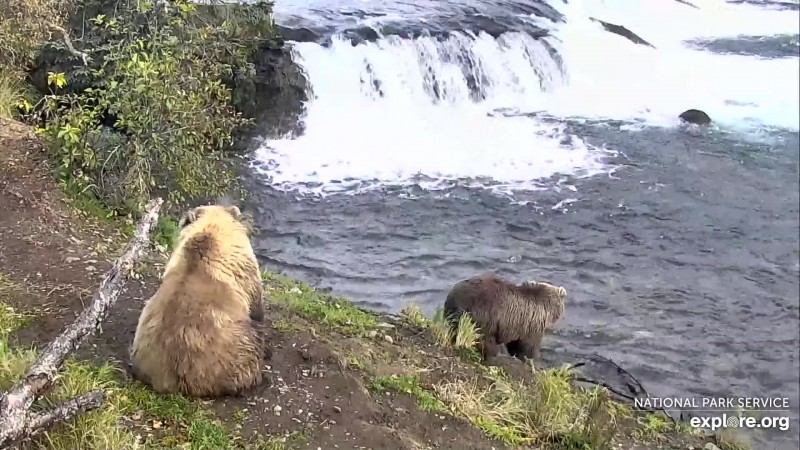 When watching the riffles cam, we’ve noted a lot of salmon in a shallow area near the platform. 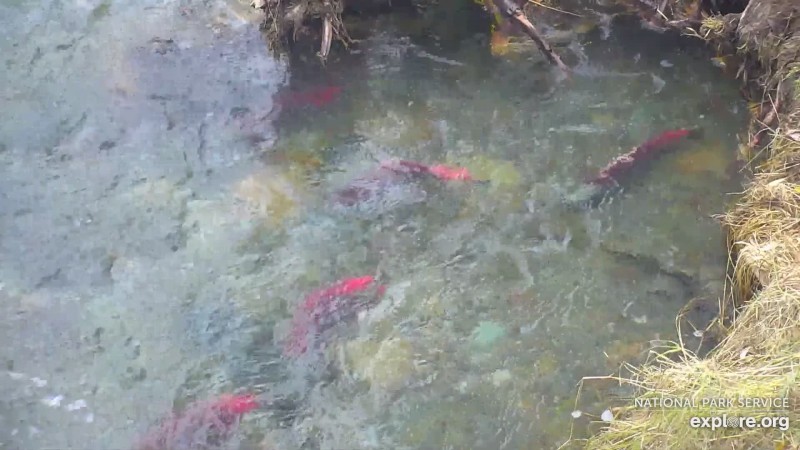 salmon in the riffles Snapshot by Corrwest

Subadult 907 has been fishing in that area and used this interesting technique of leaping off a leaning tree trunk trying to snag a fish. Watch how successful he is in this video.

A cam op took control of the Dumpling Mountain cam one day and gave us some great close up views of the Mountain and surrounding area.  Some years, we’ve seen bears walking on the mountainside on that cam, but we didn’t find any that day. We did, however, note some bears moving around in the Lower River near the spit area when the cam zoomed in there.  They were really just dark specs, but we knew they were bears from their movements in and out of the river. 🙂 To see more about Dumpling Mountain, check this blog by Mike Fitz about his hike up the mountain. 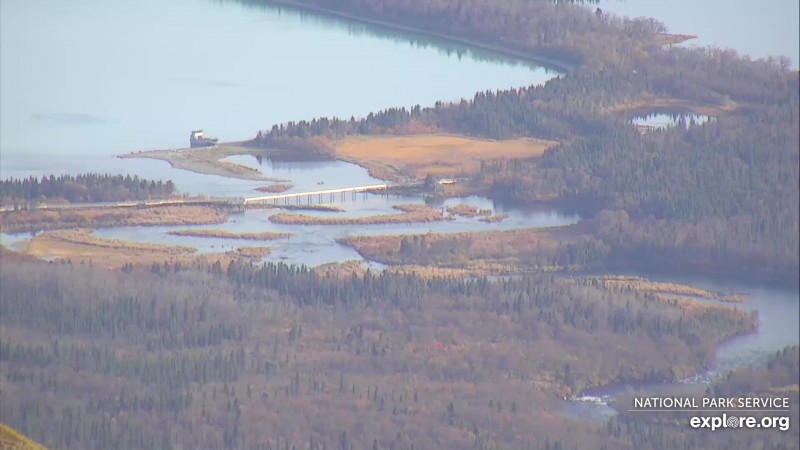 view of lower river from Dumpling Mtn Snapshot by Corrwest

We saw a wolf on cam twice this week.  One hurried by the falls viewing platform, and one was seen further downriver from the riffles near the cutbank area. 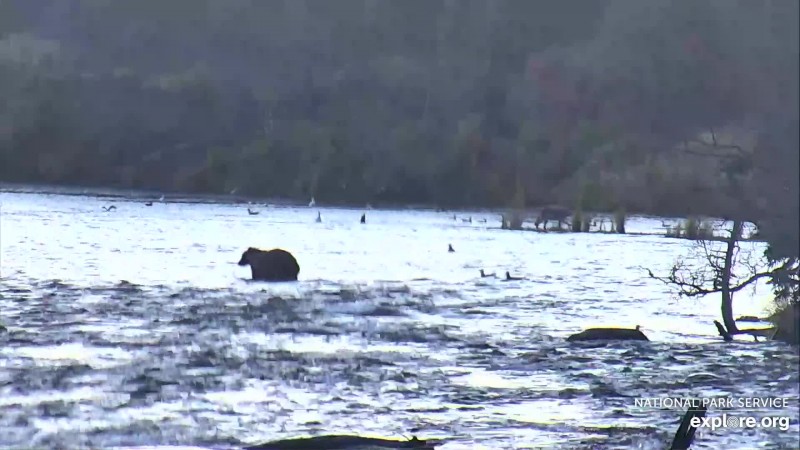 bear and wolf near the cutbank Snapshot by lsearls

A nice view of a Bald Eagle was caught on cam on Wednesday. 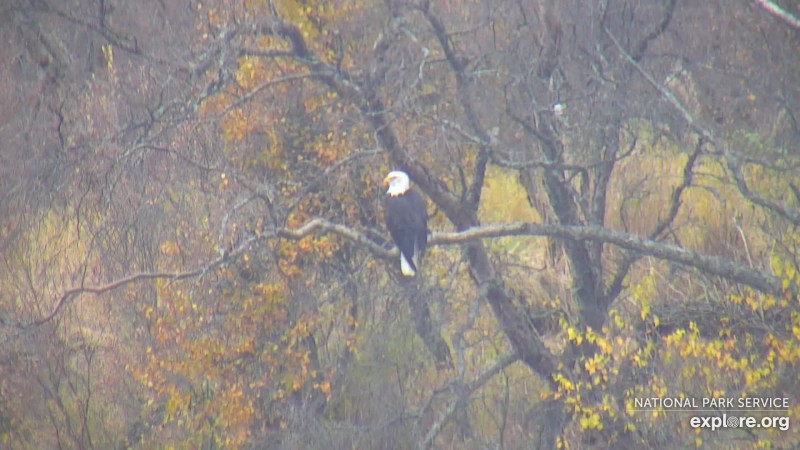 We also saw an eagle dive into the water from the riffles and falls cam then swim to the island with its catch. 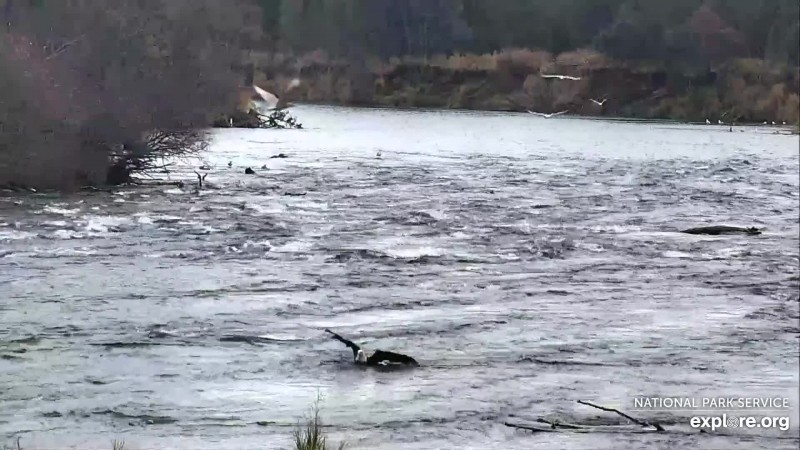 Thursday morning we were treated with a snowy view of Dumpling Mountain. Notice the tracks in the snow. Viewers wondered if they could be made by a wolverine or a ground squirrel.  Mike Fitz commented with his thoughts later:

“I’m still not 100% percent sure what animal may have made the tracks in the snow near the cam. However, the tracks are too small to be a bear. The tracks are also not from a person, moose, or caribou. Ground squirrels are in the dens hibernating by now and their tracks would be much smaller. The gait provides some clues though. Since the tracks are meandering and seem to indicate the animal was exploring and searching. My best guess is that they are from a wolverine.” 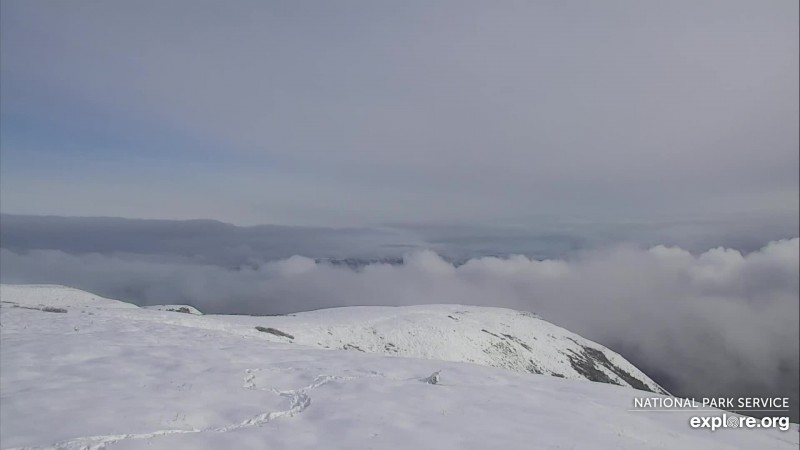 As the end of the season gets closer, we’re wondering about your Favorite Moments of the season.  We chose 20 possibilities at this link and you can go and vote for your top three choices.

Have you ever made a bear cam inspired painting, illustration, poem, animation, or other creative piece? We’d love to see it. Email us at social@explore.org to enter our Bear Cam Fan Art contest. We’re awarding prizes all week and featuring our favorite submissions on Facebook, Instagram, and Twitter