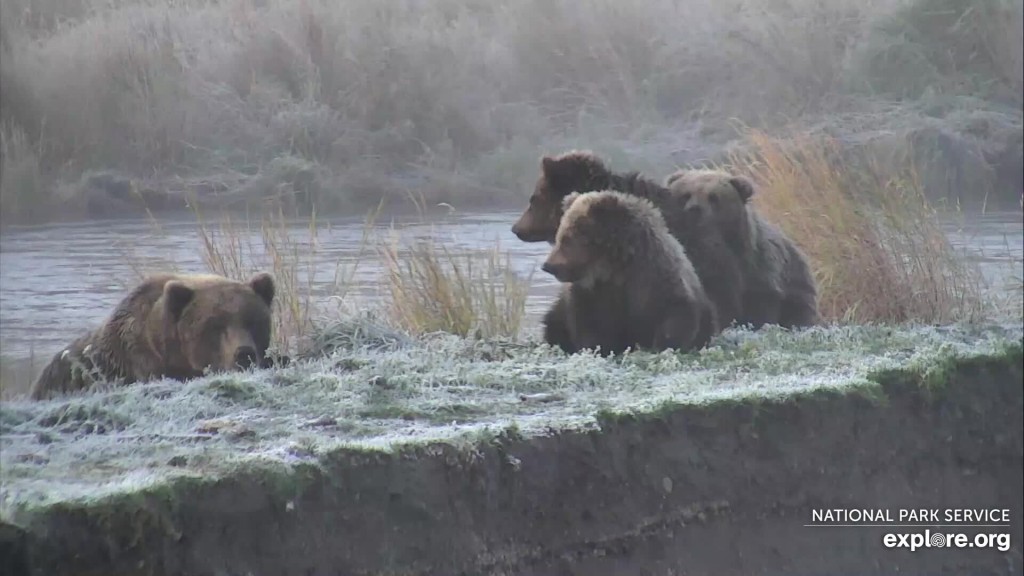 273 and coy on a frosty morning Snapshot by Christy1

After a week of voting in a single elimination Fat Bear Week Tournament, one very Fat Bear emerged victorious!  435 Holly squashed her final opponent, 775 Lefty.  Votes rolled in by the thousands as fans decided her rolls of fat exceeded that of all other contestants.  Congratulations to our Holly on the win!! 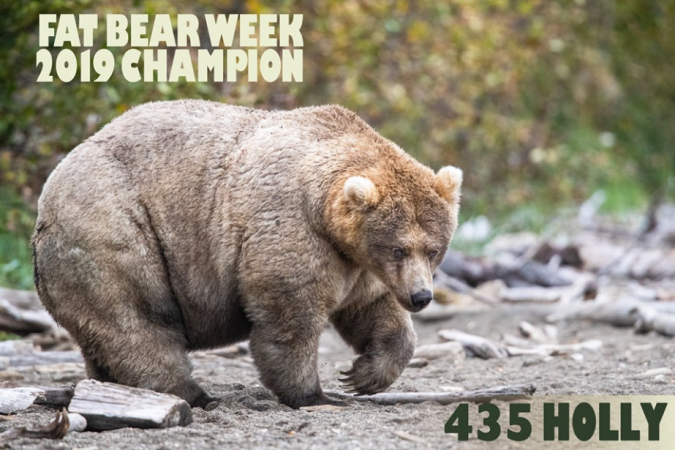 It wasn’t for a lack of effort on the part of fans supporting other bears that Holly won, though.  This blog contains a sampling of the campaign posters made by our viewers.

How big are our bears anyway?  That question has been asked often. In September, terrestrial laser scanning technology was used to scan 5 bears at Brooks Falls to try to answer that question.  Here are the results on 747 posted by Katmai National Park and Preserve Facebook. 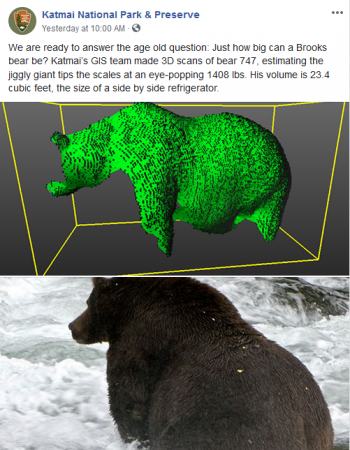 In this blog, Mike Fitz discusses how the scanning technology was used on the bears and the results obtained from the scans of 4 other bears –  480 Otis, 151 Walker, 32 Chunk and 854 Divot.

On Thursday, the cams viewing the Lower River went offline for the season.  We thought they were going to go off September 29, but we were fortunate that Katmai was able to leave them on line an additional 10 days.  They run from a park generator which is shut down when camp is winterized and staff leaves for the season. We will continue to have views from the Brooks Falls, Riffles and Dumpling Mountain cams as long as the weather and the solar powered batteries hold out. 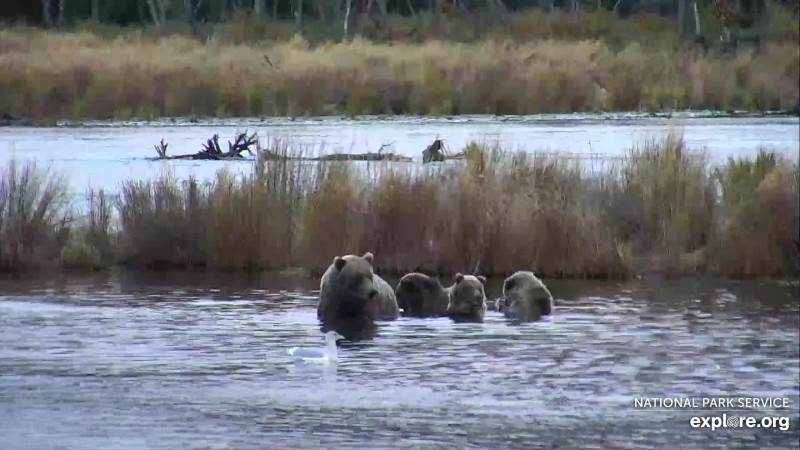 As the photo up at the top shows, the seasons are changing quickly at the Brooks River.  Frosty mornings, golden grasses, leaves falling and snow on the mountain tops means our bears will be ramping up their feeding in preparation for denning.  Some bears may have left the river already and more will follow in the coming weeks. Most will be gone by the end of October. 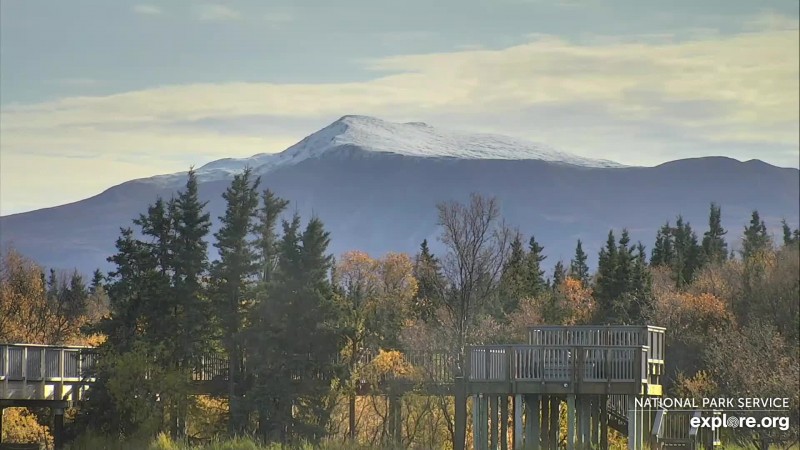 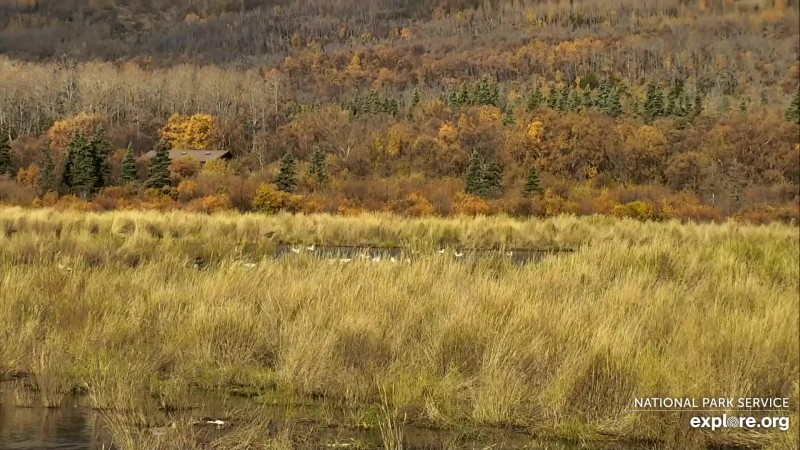 Golden grasses of the lower river Snapshot by BarbaraHoran

A couple of bears we did not see spending time at the river this fall did make a brief appearance this week.  89 Backpack was seen at the falls. 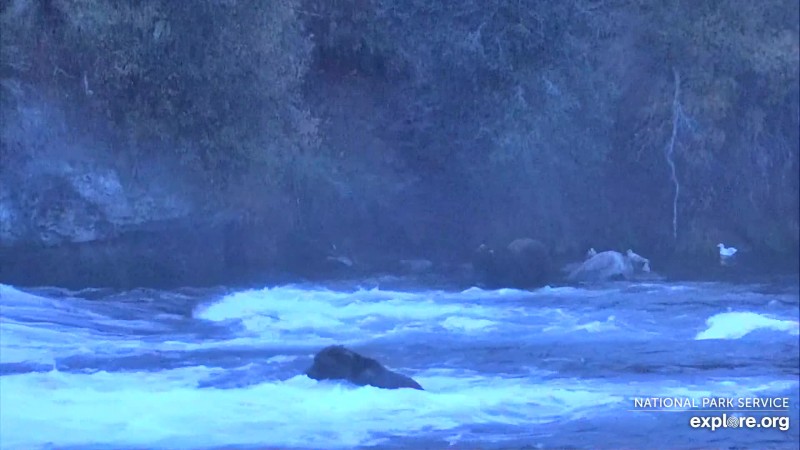 And 634 Popeye gave us a great view of his massive size, too. 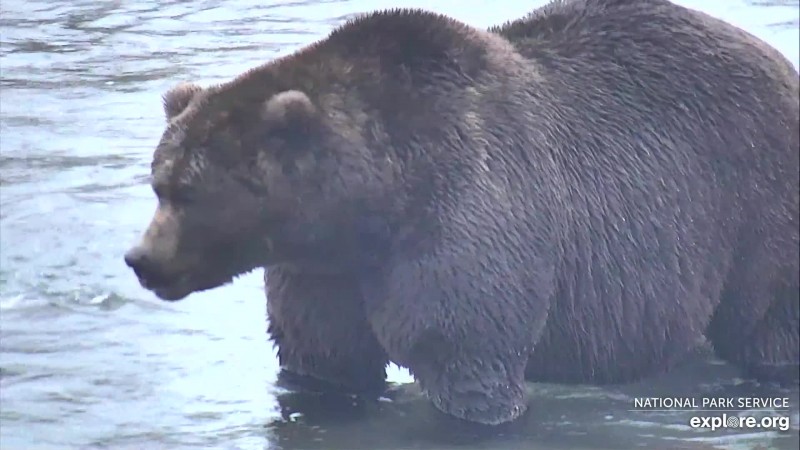 634 Popeye at the falls Snapshot by LaniH

480 Otis, who was fishing mostly in the Lower River area last week, moved back to the Falls this week.  He has fished in the jacuzzi, but as this pic shows, is having the most success in his “office” area against the far wall. 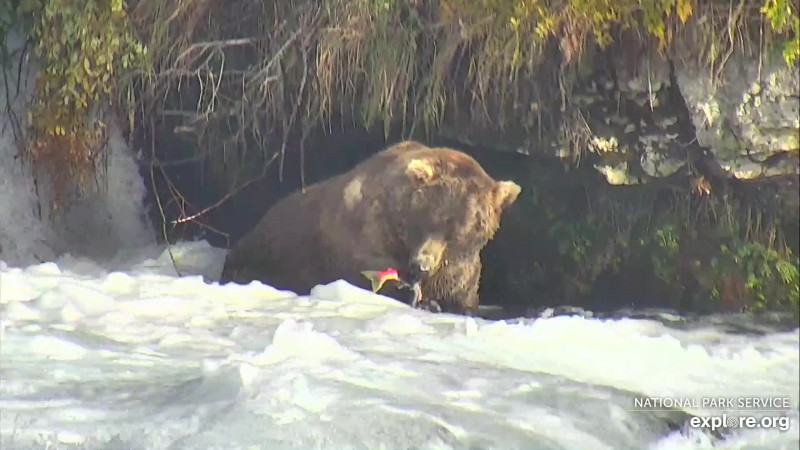 480 Otis makes a catch in his office Snapshot by SgtPepper

755 Scare D Bear has been a regular at the falls.  Also a member of the damaged ear club, he is sometimes confused with Otis, but he’s a huge, beautiful bear in his own right. 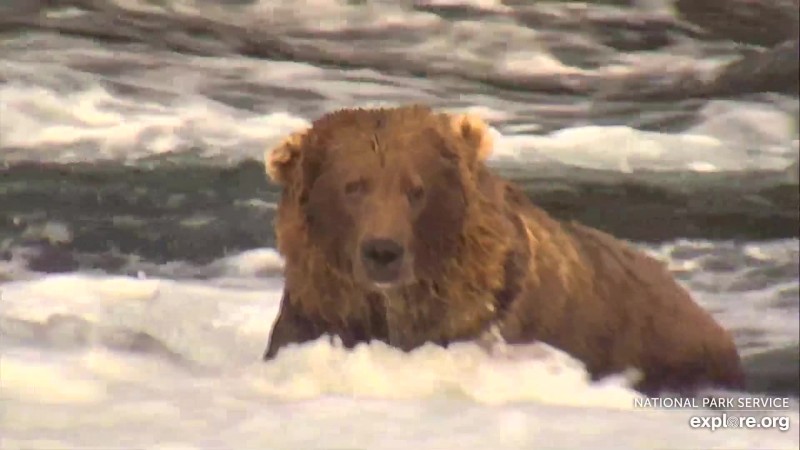 Bear 879 also spent some time up at the falls when we had usually been seeing him snorkeling on the lower river. 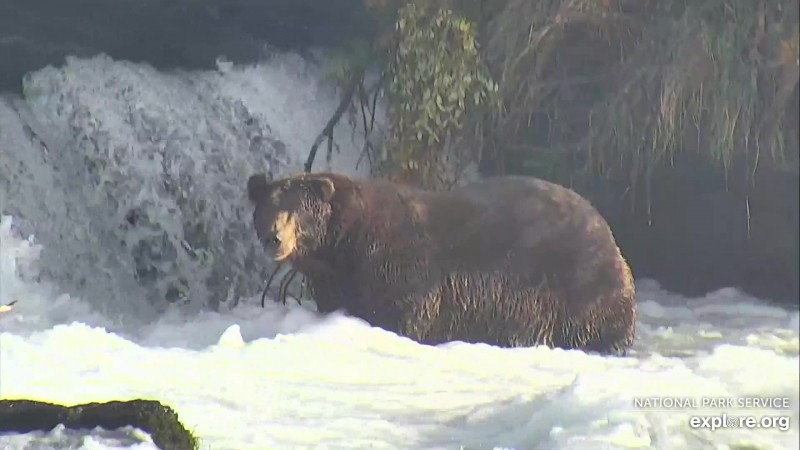 775 Lefty who lost to 435 Holly showed up at the falls this past week to give us another good look at how fat he’d managed to get while fishing the lip. 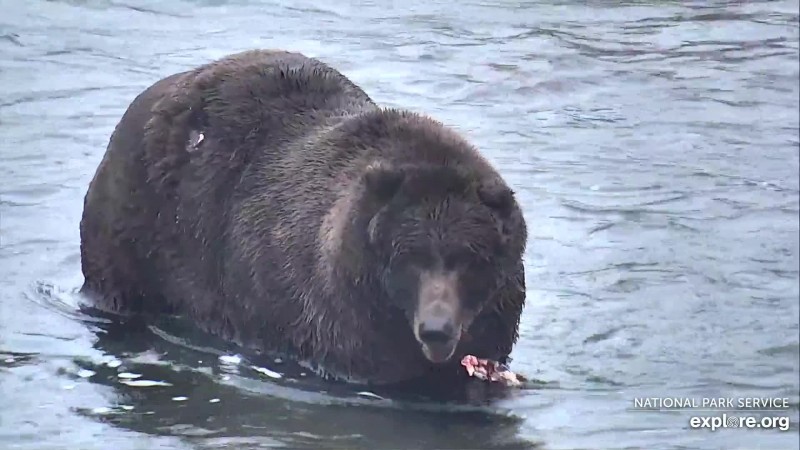 504, a sow we have not seen much this year,  and who is the mom of bear 821, showed up on the closed trail. Wherever she has been, she’s had a lot of success fishing. 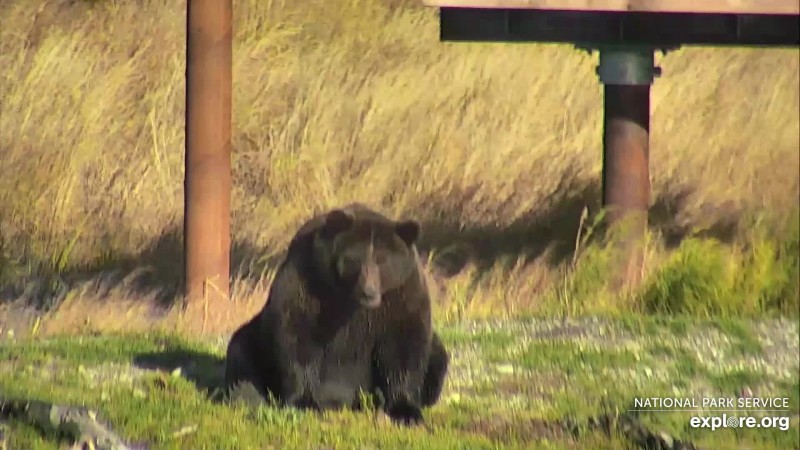 An unknown sow with two coy showed up on the lower river as well this past week. 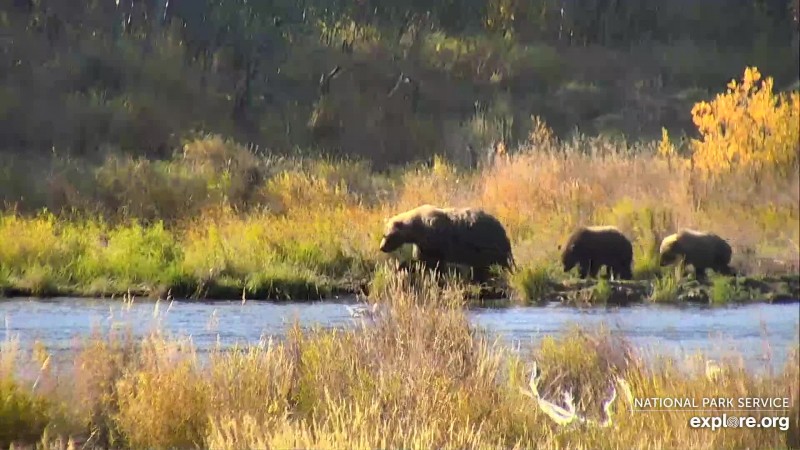 On Wednesday evening, we got a good view of a wolf prowling the Lower River looking for fish or scraps.

The underwater cam gave us a glimpse of Goldeneye ducks diving in search of food.

One even seemed to be checking out the underwater camera On our last evening for Lower River Cams, nature treated us to a beautiful rainbow. 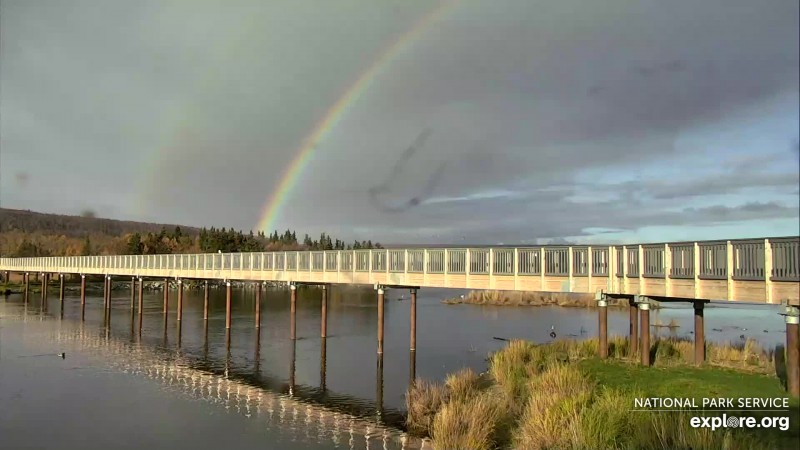 482’s cubs were seen enjoying a play session on the Lower River. 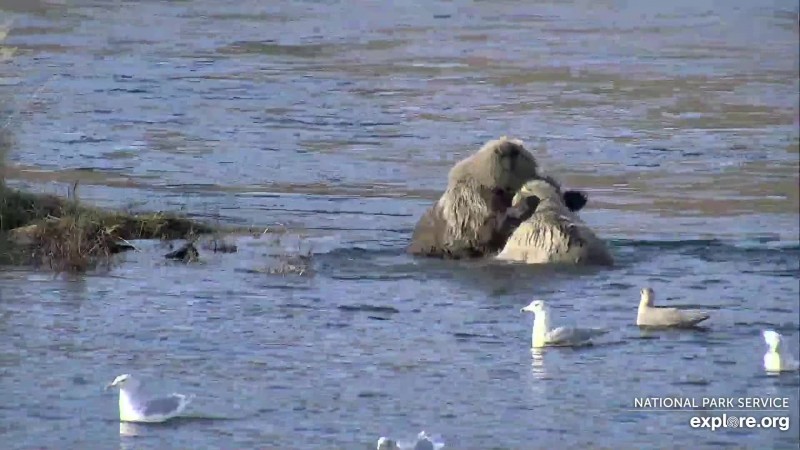 482’s cubs playing in the river Snapshot by GreenRiver 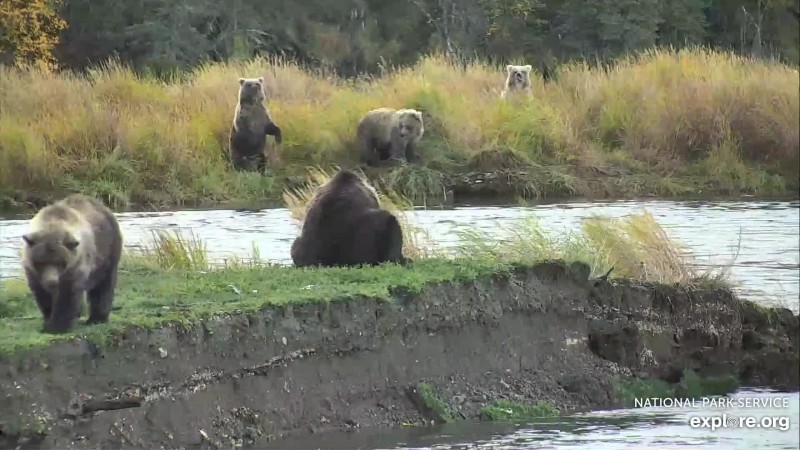 On Thursday evening a magpie seemed intent on annoying a subadult bear thought to be 908. The magpie flew around the bear and even poked her in the bottom.