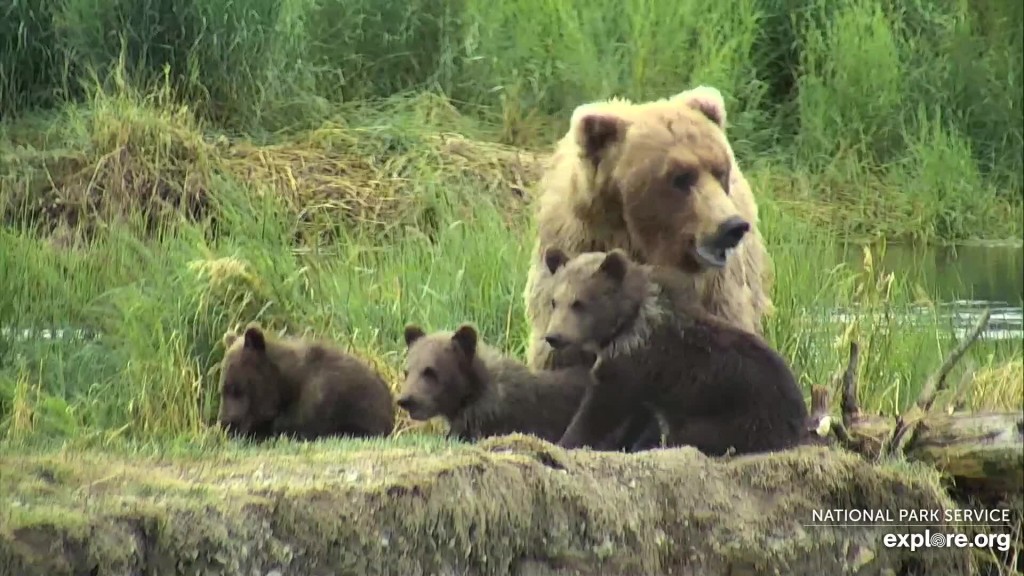 273 and coy Snapshot by CamOp Fawn

The sockeye salmon run continued to be strong early in the week with fish jumping faster than the bears could catch them, but it has slowed (as expected) in recent days.  There are still fish heading up the river though and many bears are still catching enough to keep them at the river. Typically by the end of July a lot of the bears will migrate to different areas beyond Brooks Falls to catch the salmon that have gone upstream to spawn in smaller streams and creeks. Many of these bears would then return in late August and September to feed on the dying, post spawn salmon washing back down the river.  Last year there was a good sized run of silver salmon that kept bears at Brooks Falls during August. We’ll have to wait and see what happens and which bears stay around this August. 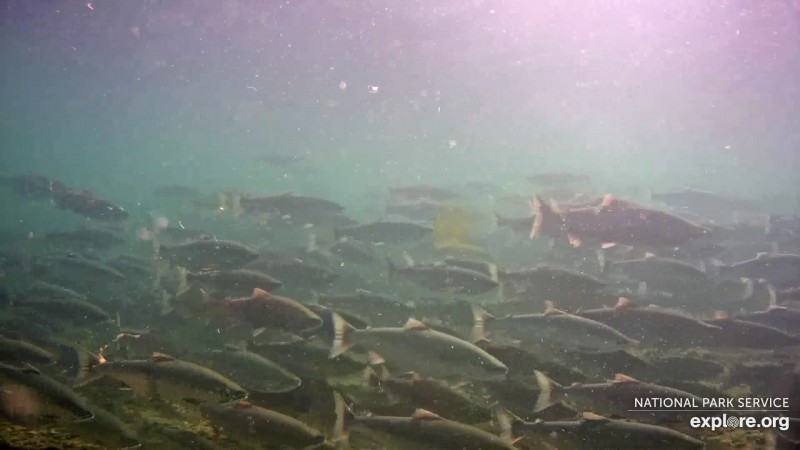 Salmon schooling below the bridge Snapshot by Kam

Probably the most unusual thing we saw this week did not involve a bear. It was a Moose!  While we have sometimes caught a moose on the cams in previous seasons, it doesn’t happen often.  This one was seen swimming in Naknek Lake at the mouth of Brooks River. We got a good view of him.  You can catch him on Explore’s weekly highlight video linked above. 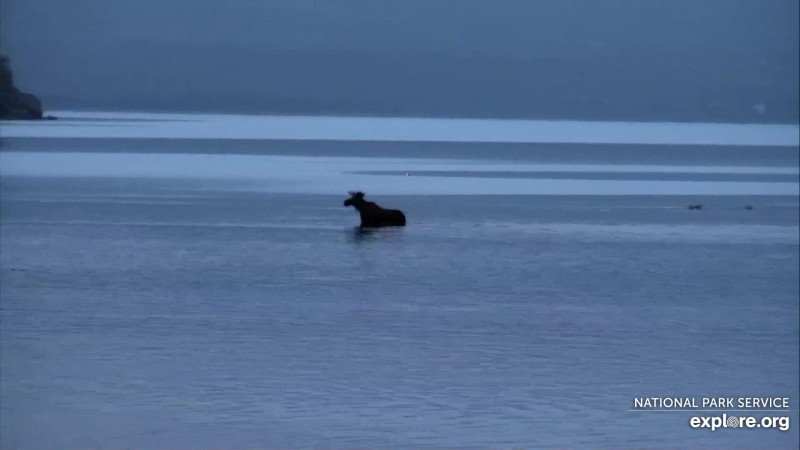 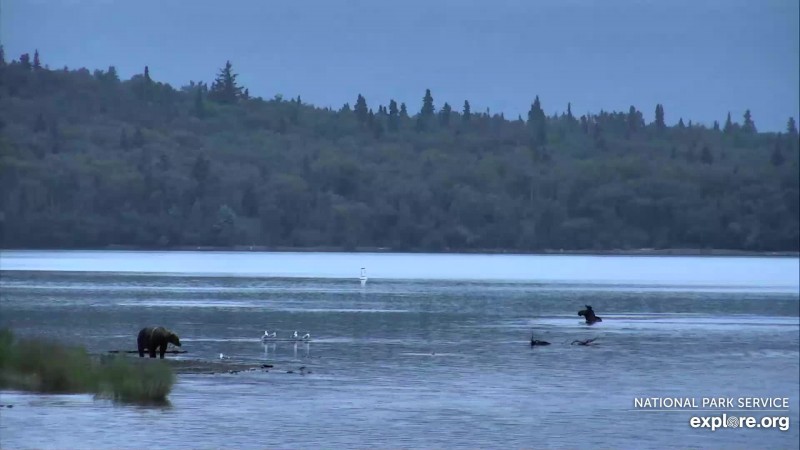 The wolves also continue to appear regularly.  This one gave a great view to the cam when it came through the falls area. 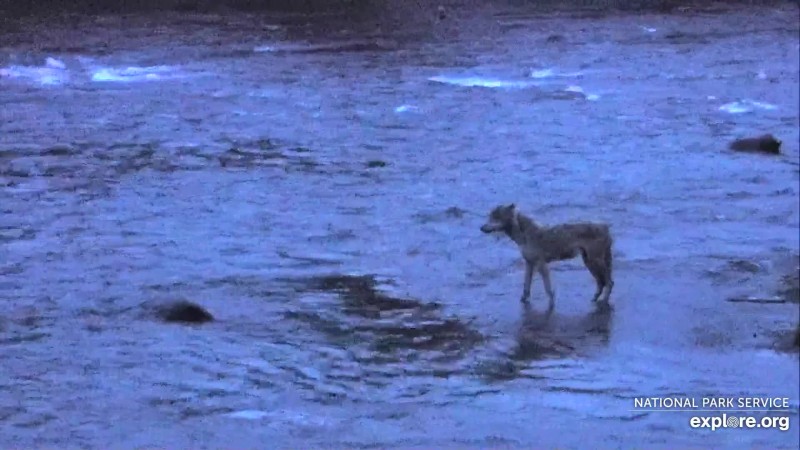 Wolf at the falls CamOp Arya

The Underwater cam provided a number of fun views of bears, some swimming right towards the cam while others stood up in the water and appeared to be playing. Surprising at how much rough treatment the cam can withstand from the bears. From them standing on or pushing off of it. 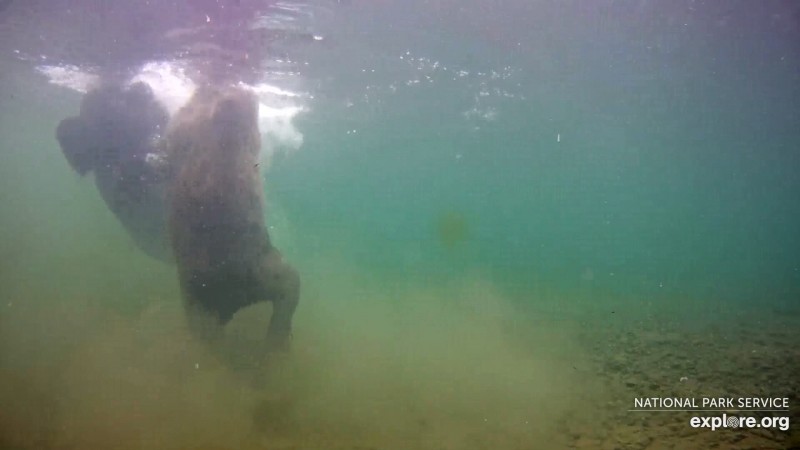 two subadults playing near the underwater cam Snapshot by Brenda05

Two more subadults were spotted playing near the underwater cam on Friday: 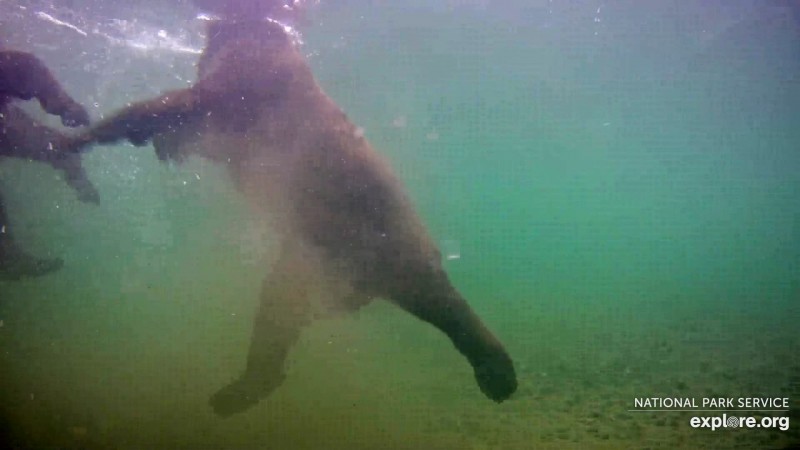 Playing seemed to be the name of the game frequently this week.  Here are some moments of play from both young and old. 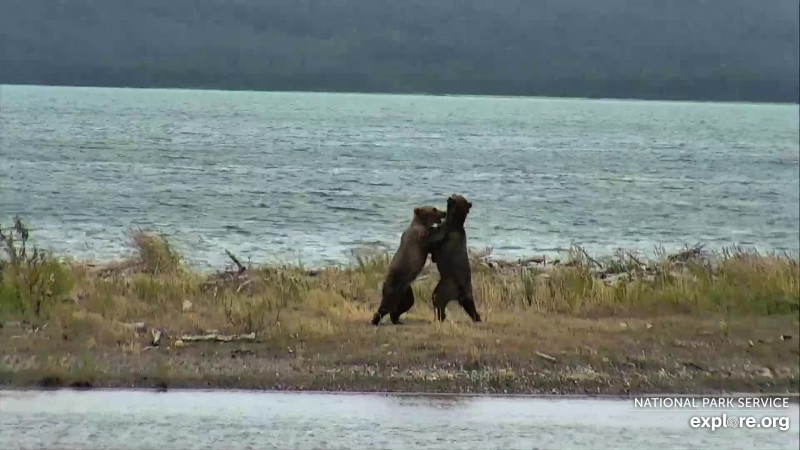 subadults playing on the spit Snapshot by CamOp Kathy 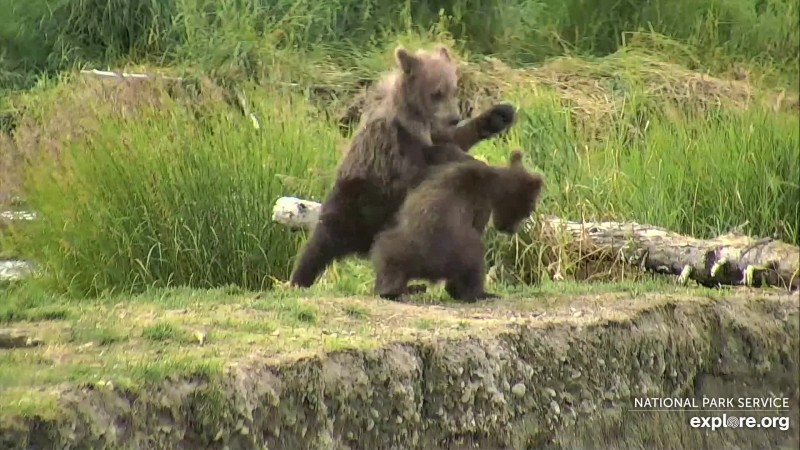 Both 719’s and 273’s coy (cubs of the year) seemed to enjoy playing on a bent tree dubbed the trampoline tree. 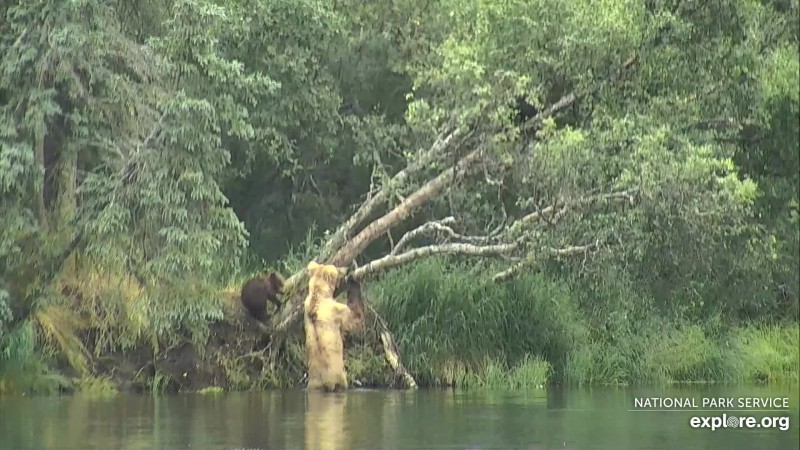 273 joined in play time with her cubs. 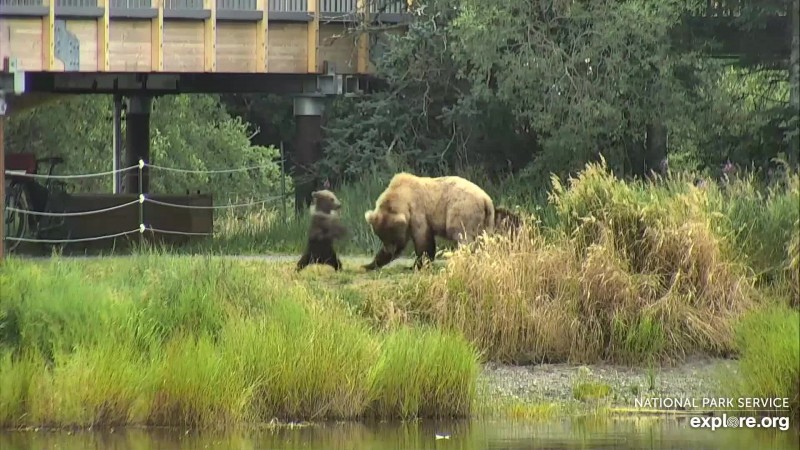 273 playing with one of her coy Snapshot by CamOp Scout

273 tried to demonstrate how to have fun playing with a very large rock along the shoreline.  The rock didn’t cooperate though – resisting her best efforts to move it.

Not sure if this qualifies as play for 273, but we’re guessing the cub that got a ride on her back thought it was great fun! 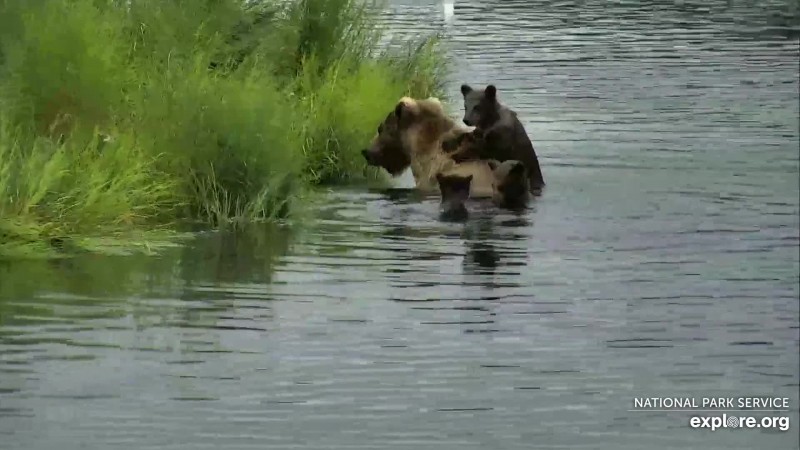 273’s cub gets a ride Snapshot by LaniH

719’s cubs had a great time playing king of the log on the spit.

Some distance downriver from the falls in an area called the cutbank, we saw a couple of other bears enjoying some play-fighting. 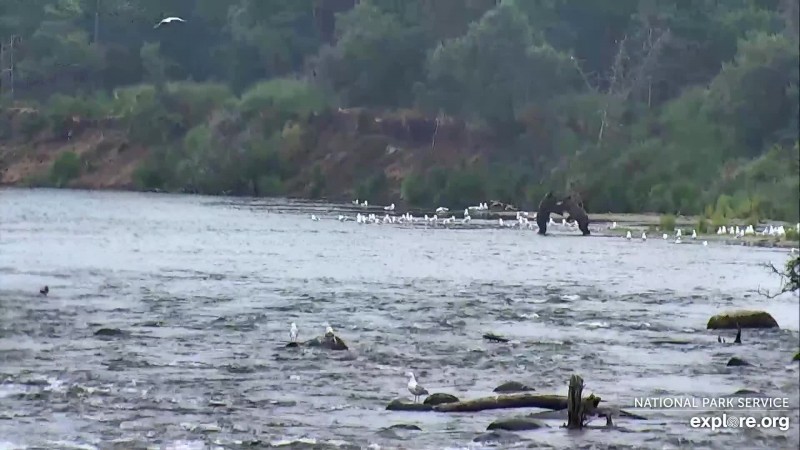 We also caught 132’s yearling playing around the boats tied up at the spit.  The yearling also was able to remove a cushion from the boat to play with. This was fun to watch, but highlighted a good reason not to have unsecured items that bears think of as play toys when the cub returned later and boarded the boat looking for more things to play with. Mike Fitz had this to say about 132 finding stuff in boats and having to be hazed away by Rangers:

“132’s cub has a history of entering boats. Last fall, I watching it climb into two boats on separate occasions and start to play with unattended property and and maybe even eat food (neither of which can be left in boats). Just a few moments ago, rangers looked to be using the truck to haze the bears away from the boat before they could cause damage.

Bears learn quickly and once they receive a “reward” in the form of toys or food, they aren’t likely to forget. 132’s cub remembers that boats might contain a reward so he(?) is more inclined to investigate them, another example of how past mistakes by people have future consequences for bears.” 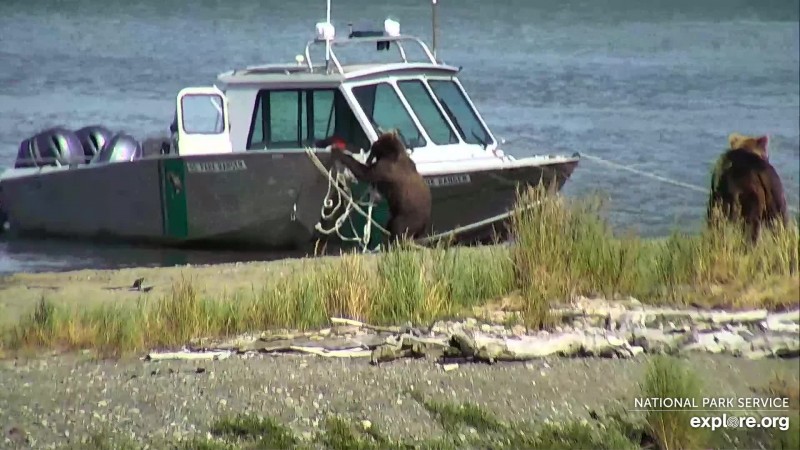 132’s yearling removing rope from a boat Snapshot by LaniH

Even the adult bears joined in playing this week.  68 (yes, the same bear who asserted dominance over 747 in a huge fight a couple weeks ago) was seen playing with 503! 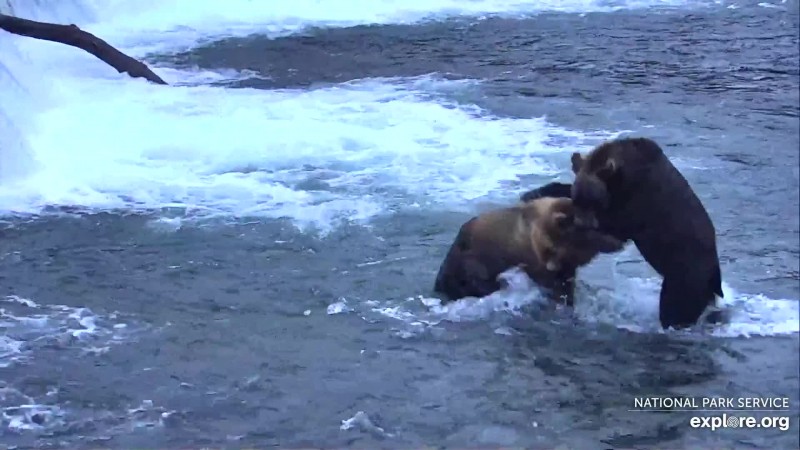 503 playing with 68 Snapshot by CamOp Scout

A young subadult bear tried out fishing on the lip of falls this week.  While it did a great job catching multiple fish, it let all of them go afterwards.  Was it practicing? Just not hungry? Playing? Mike Fitz offered this opinion on the behavior:

“I interpret some of the behavior that some bears express at the falls as play, like when they lunge in a pool boiling with salmon but don’t make a real effort to fish. Catching and dropping fish is something else though. Bears might have an instinct, like many predators, to catch vulnerable prey. The instinct might be so strong that they can’t easily resist the urge. We see many, many bears catch and immediately release salmon when catch rates are very high. Perhaps they can’t say no to salmon.” 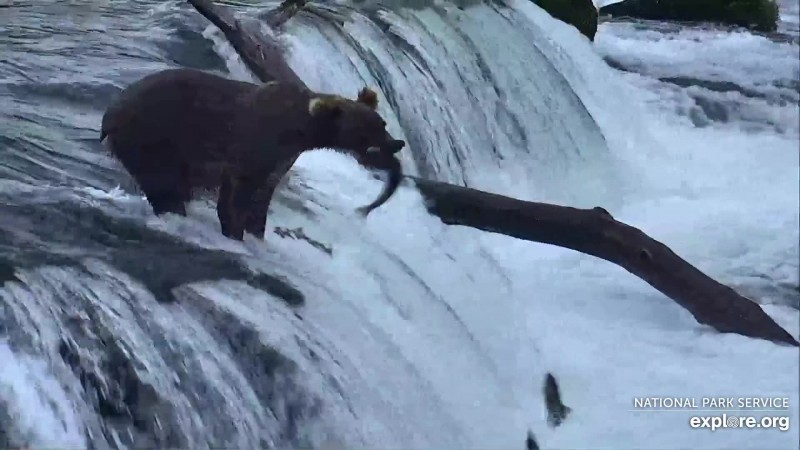 Subadult on the lip Snapshot by GreenRiver

We saw an unknown sow with two cubs that appear to be yearlings this week.  Lots of guesses as to possible ID, but no confirmation from Katmai’s Rangers yet. 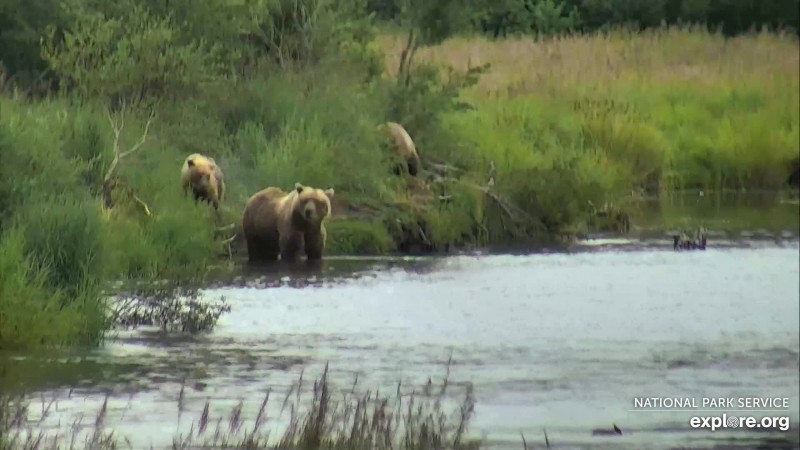 We had some sad news this past week. We learned that 171 has only been seen with one of her two coy the past few days. Katmai Conservancy Ranger Naomi had this to say a few days ago:

“171 has only one cub right now but that just happened and we don’t know if it is separated from her or what the situation is.” 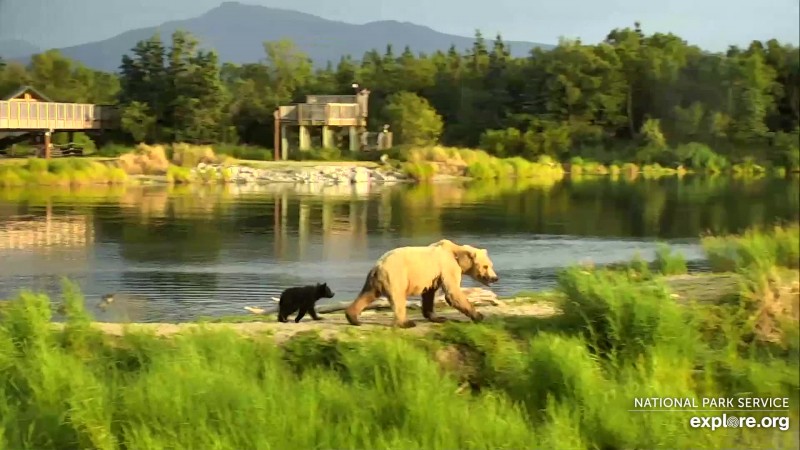 171 and coy Snapshot by CamOp Scout

The review wouldn’t be complete without a mention of…..  You guessed it, 480 Otis! After spending long hours sleeping last week, Otis seems to be making up for lost fishing time this week.  He’s spent many hours at the falls showing his trademark, patient fishing style. With his missing and worn teeth, it takes him a bit longer to consume fish, but he just stays longer and has done well for himself. He bellowed at other bears who’ve invaded his personal space, most especially at 151 Walker.  All is normal in his world. 🙂 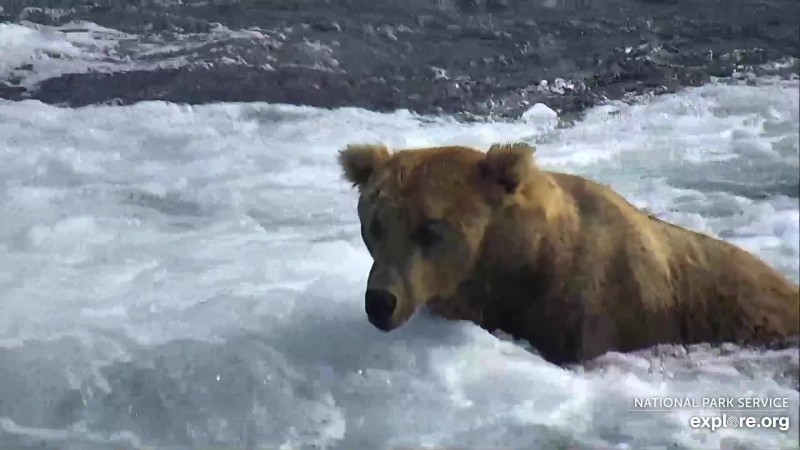 480 Otis fishing in the jacuzzi Snapshot by CamOp Arya

Meet 402 in this week’s installment of Bears of Brooks Falls.