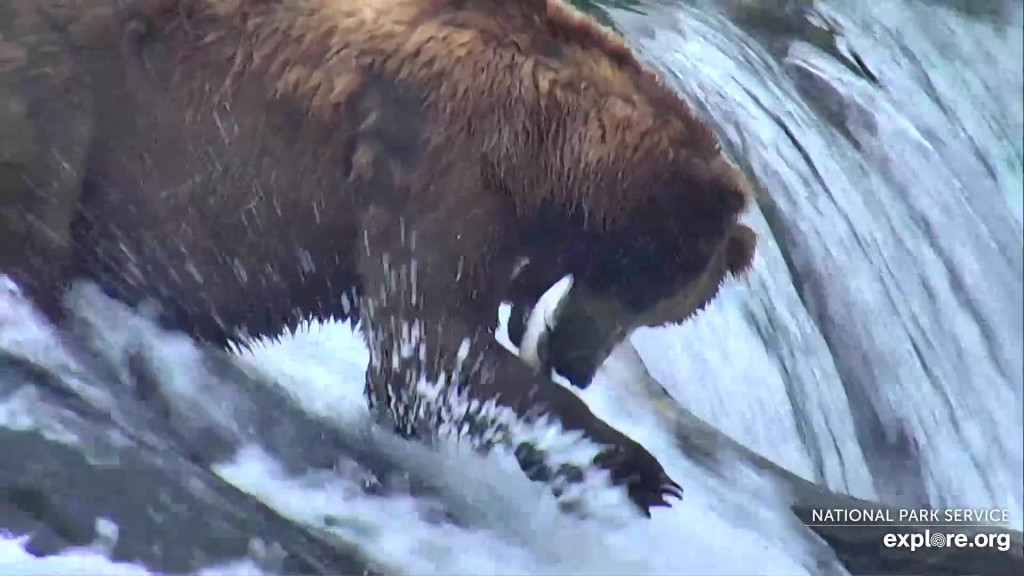 Explore has announced the winners in the first Bear Cam Snapshot Contest. Check here to see the winning photos. Congratulations to all the winners!

This week saw temperatures finally cool down to a more normal level and also saw some rain. Both seem to have made the Brooks River more inviting for the Sockeye Salmon to continue their journey. After several days where the river seemed nearly empty of salmon, as they perhaps were staging in the cooler waters of Naknek Lake, there was a sudden onslaught of them surging towards and jumping over the falls. “Fish boils”, where the water seems to bubble up with churning salmon, were seen everywhere.

The bears seemed almost overwhelmed by the amount of salmon jumping and bumping into them at the falls. No bears went hungry this week. The fishing was easy all along the river and bears could quickly get their fill of salmon and then head off to take a nap. 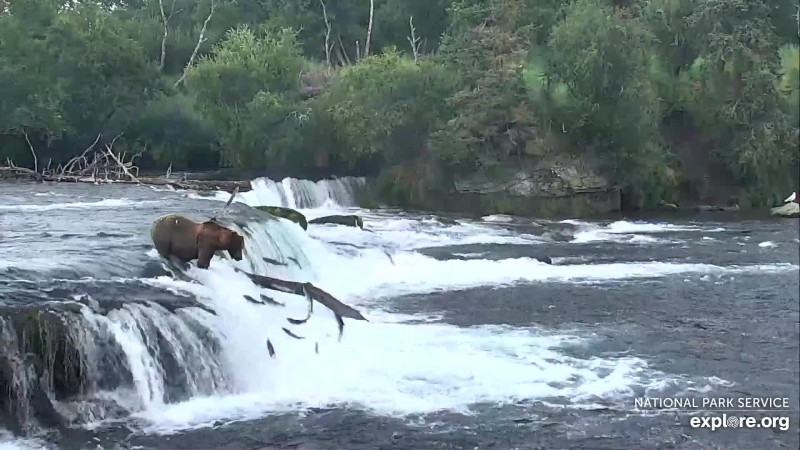 Speaking of napping…. 480 Otis has been doing some epic napping. According to Katmai Conservancy Ranger Naomi, Otis, after an absence from cam view of about a week, was seen sleeping in the grass next to the falls platform. For about 16 hours! After spending time fishing, he was seen in the same spot napping the next day! Ranger Naomi gave us a peek at his napping spot on a few Periscope live broadcasts that can be found here. 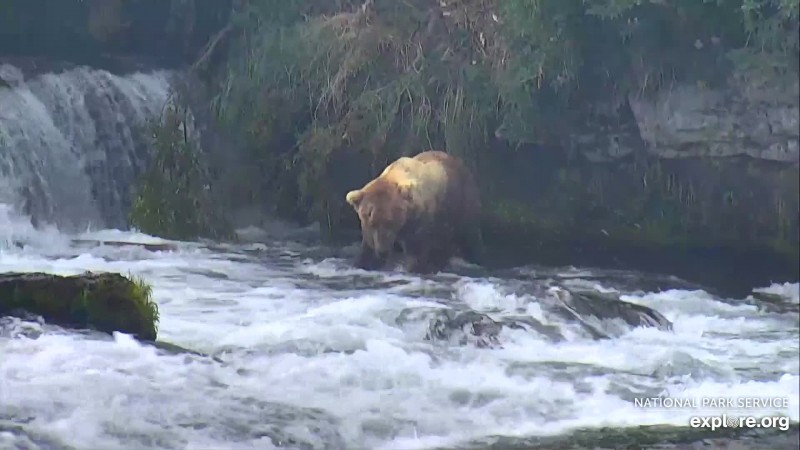 480 Otis in his office Snapshot by Susy Q

747 was also caught napping on the island near the falls this week. He got our attention a couple other times by mooching fish from 775 Lefty, and for his unconventional backward entrance into the Jacuzzi to fish. 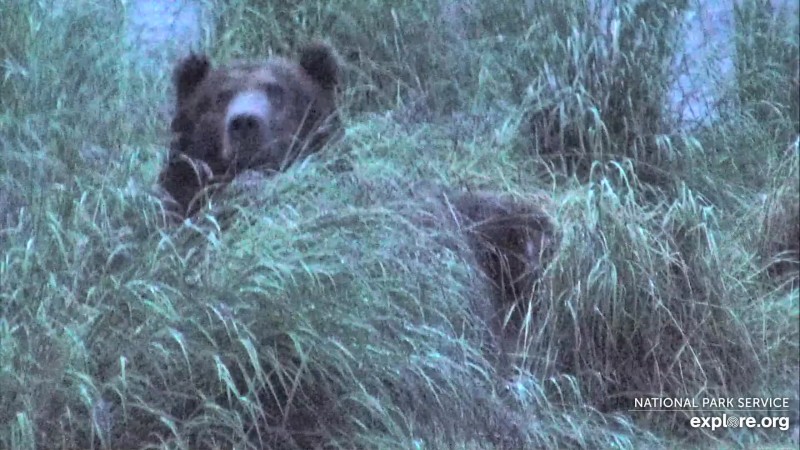 747 napping on the island Snapshot by FrogsOn

Not to be outdone in the nap department, bear 68 stayed close to the fishing spots for his naps by settling down in the river and snoozing with his head on a rock.

Meanwhile 775 Lefty – who must be breaking records for the number of salmon eaten during his marathon sessions on the lip of the falls, prefers to just sit down and doze off until his nose hits the water.

856, the most dominant male at Brooks River, and 68 continue to add some tension at the falls with their uneasy relationship. 856 is still letting 68 know that he is in charge but 68 seems to only just barely defer to him, sometimes refusing to move out of his way, and often doesn’t flinch when 856 gives a little fake charge in his face. 856 turns and walks away, seemingly the winner, after the encounters. Stay tuned to see if the Hierarchy will change further this season. 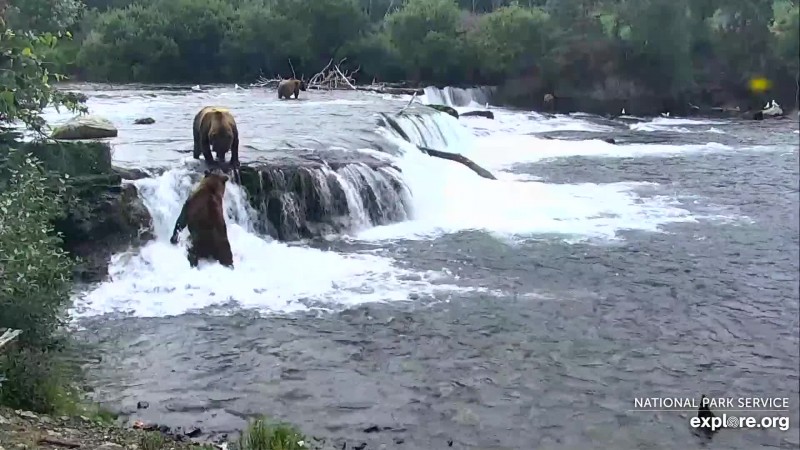 503 also showed us even he has his limits with letting bears nearby. 801 was behind him in the jacuzzi when 801 decided to pounce on a salmon. 503 turned and got into a kerfuffle with 801, letting him know he was too close 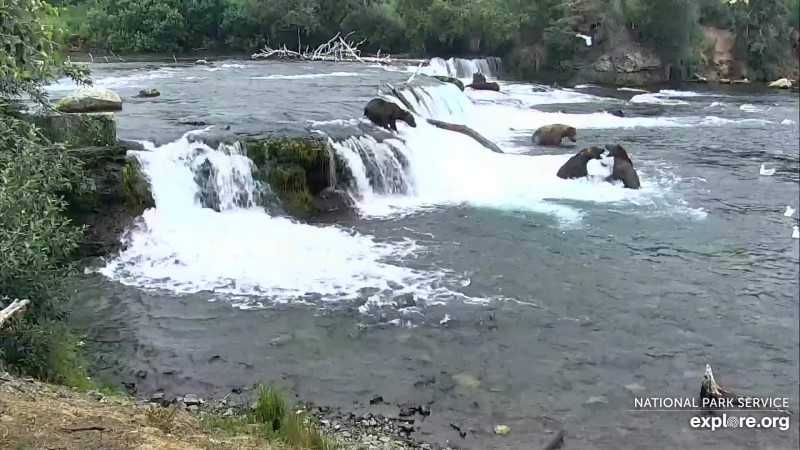 Moms and cubs provided a lot of viewing fun this week! Including these highlights:
719’s ID has been confirmed and she and her two small coy (cubs of the year born this year in the den) gave us many cute views. 708 Amelia’s ID was also confirmed. She also has two coy that we’ve seen a lot of along the lower river. 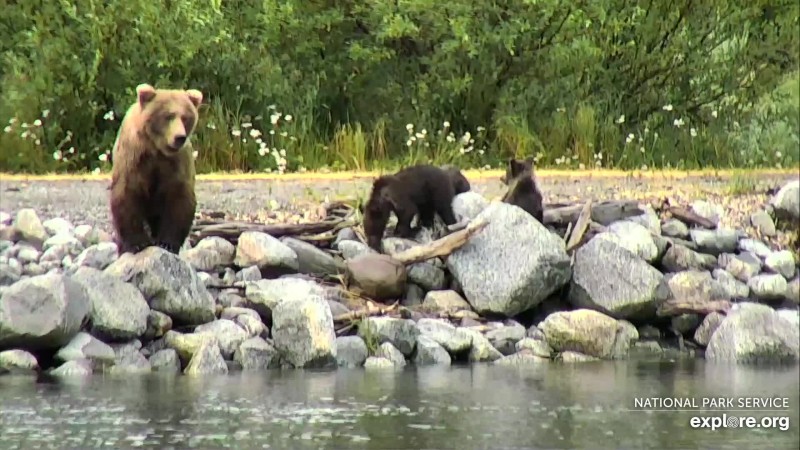 708 Amelia and coy Snapshot by Larinor

273 (not officially confirmed) has 3 coy that love to play and wrestle while Mom looks for fish and we caught many views of them playing along the closed trail. One of her cubs found out how steep the bank was on the closed trail when it slipped off. The cub managed to climb back up and join 273 and siblings.

132 and her yearling have been spending time on the spit (Yes, the tree has been trimmed and we can see the spit!). Her yearling cub was seen playing with a sub adult. 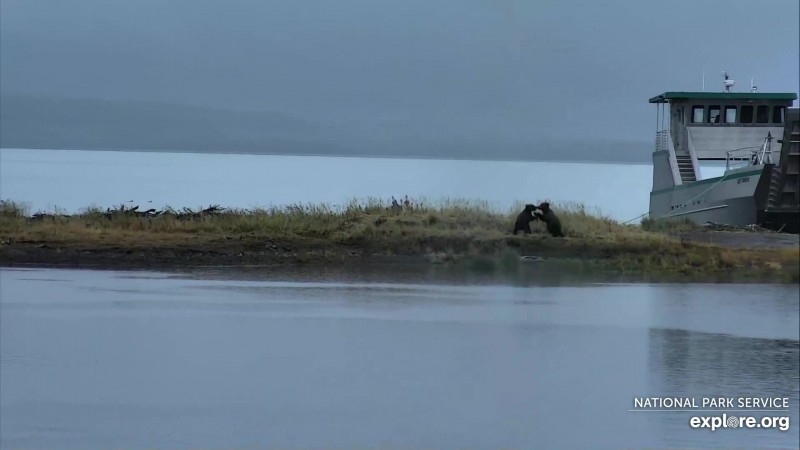 The views on the underwater cam were spectacular this week. In addition to the thousands of salmon passing by, we’ve been treated to some really fun views of bears under the water. A video of the bears playing can be seen here. Since the water is about 5 feet deep and getting deeper at the underwater cam site (per Mike Fitz) you can get some perspective on the size of these bears. 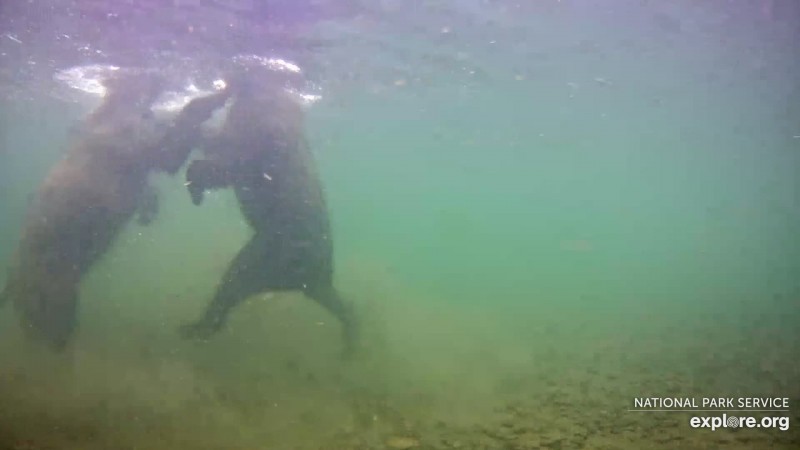 Subadults play near the underwater cam Snapshot by Bookmom

We have continued to see wolves (or the same wolf?) on the cams. They have been all around the river – seen at the falls and riffles cams and on the lower river cams. They are doing well scavenging for fish. Sometimes carrying their catch away and sometimes consuming it. A sub adult decided to give chase to this wolf. Mike Fitz made this comment about Katmai’s wolves:

“It’s not uncommon for wolves to hunt alone in the summer when they target smaller prey compared to moose or caribou. We know very little about the wolves in Katmai though. No one knows how many there are or even how many packs utilize the park. We don’t know if this wolf is part of a larger pack or a dispersing individual. Since it has been seen frequently this summer, I suspect it is the former.
One thing we do know is that they feed heavily on salmon in the summer. Like the bears, salmon could be the major source of food for some wolves during the summer. Since wolves are active throughout the winter, unlike a hibernating bear, then wintertime food availability probably limits their numbers and dictates the size of pack territories.” 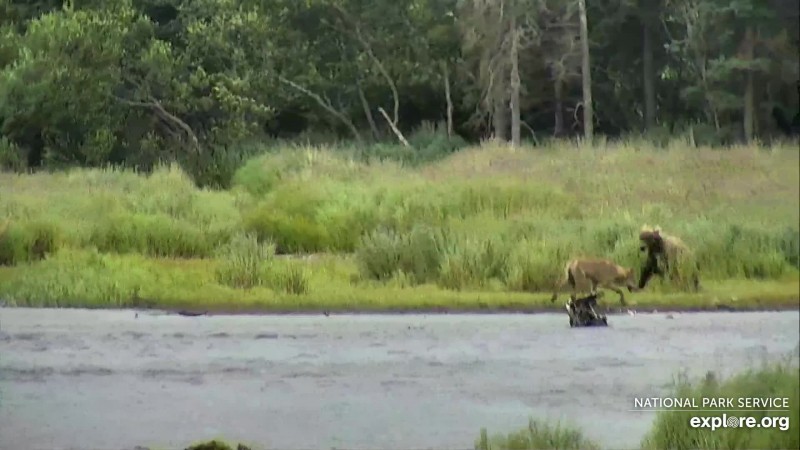 One Fish, Two Fish – a blog by Katmai Conservancy Ranger John Koster can be read here.

Meet 435 Holly in this week’s installment of Bears of Brooks Falls.

Last week we had the Bear Monitoring live chat with Ranger Leslie and Mike watch it here.

Are You There Brown Bear
Mike Fitz has launched a Community Science Project where your snapshot can help monitor information about the bears you see on the cams.
This community science project will supplement the Brooks River bear monitoring program by recording observations of bears during and outside official monitoring sessions, essentially extending one aspect of the bear monitoring program through an entire summer and beyond as long as the webcams are functioning.
To participate: After taking a Snapshot, click on Community Science as shown here: