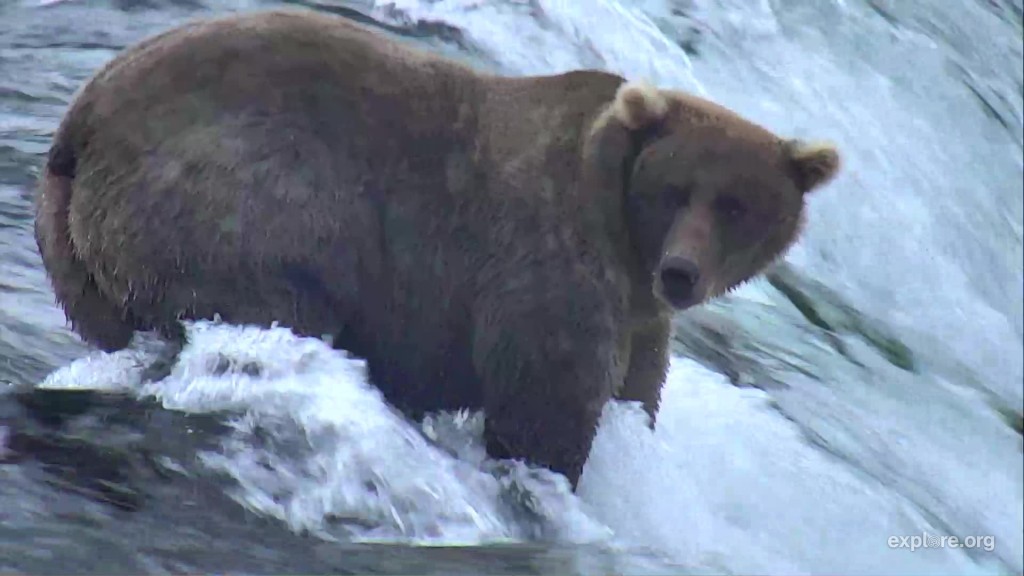 128 Grazer on the lip Snapshot by BearBell

Hi and welcome to our weekly Bear Cam blog. We will be publishing this blog every week with a review of the previous weeks Bear Cam highlights. Brought to you by your bear cam Mods, LaniH and GABear. This week we will include things from the previous week, as one of us was on vacation.  🙂

Bear activity has definitely slowed down along the Brooks River during the last two weeks.  The peak of activity during that time was August 15 and 16. Since then, even though some bears have drifted off,  we have still had a number of regular adult bears and quite a few sub adults, in fact, still more bears than would be expected to be seen in August. Some very windy, stormy days also seemed to contribute to seeing less bears for a few days.  Explore Fellow, Mike Fitz talked about An Exceptional August at Brooks River in his blog which you can read here. Mike also did a live chat on this topic which can be viewed here. Ranger Russ wrote a blog about the Anomalous August it can be read here. Last weeks highlight video can be seen here, and this weeks can be viewed here. 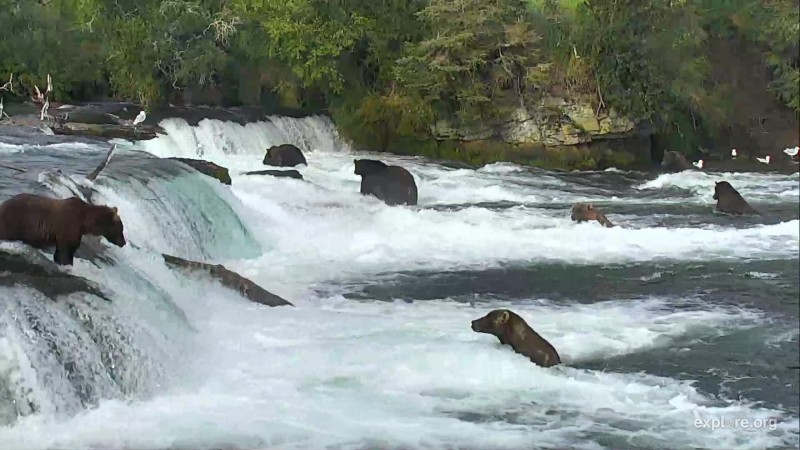 7 bears at the falls on August 16 Snapshot by Corrwest

This is the season for many types of berries to become ripe in the Brooks River area. Some bears may be off berry picking during their absence from the river.  We think we have seen bears in the distance on the Dumping Mountain cam in recent days. According to Mike Fitz:

“Berries usually begin to ripen in the Brooks River area during mid to late August, depending on the species and elevation. Because of their high sugar content, berries are a valuable late summer food for bears, enough so that some bears will forgo salmon for a time to eat berries.”

Ranger Russ had this to say:

“A bear up on Dumpling this time of year would almost certainly be eating berries. The berries grow everywhere around Brooks, all along the roadsides, the rivers, trails to the falls, literally everywhere.” 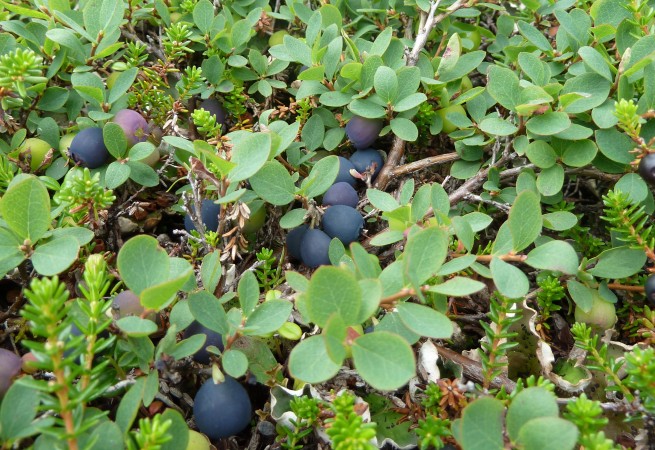 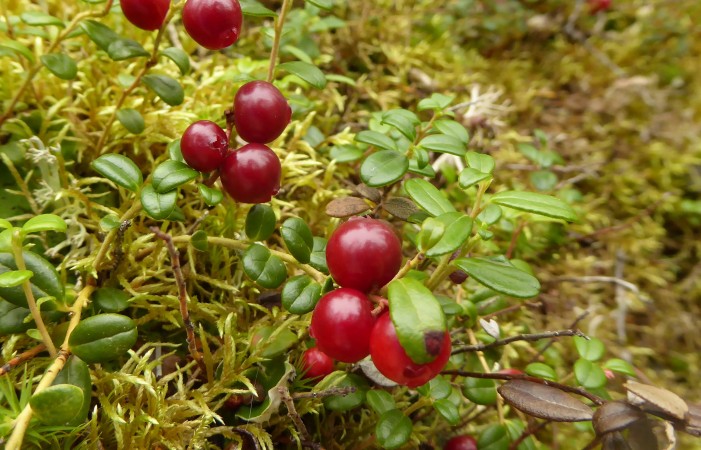 Before 480 Otis went off to (presumably) an easier place to fish, he had a couple of surprising episodes with jumping fish near the Jacuzzi. Never a bear to exert unnecessary energy, Otis never got to his feet during either episode, as confused fish jumped from the water several times.  He made a grab for them and watched their progress with interest, though. 🙂

503 has been involved in both play-fights and confrontations with bears in the last two weeks. He’s been one of our most regular bears at the falls each day. One day 747 went after him for reasons that weren’t apparent. Maybe just 747 exerting his dominance. The two stood and traded a few swats and then 747 chased 503 away.  503 and 151 Walker have had play-fighting sessions and also a couple of encounters that looked less like play and more like aggressive behavior. Ranger Russ observed:

“…we’ve seen a lot of 151 and 503 in play. The other morning however, it changed into an actual fight. Later they were seen playing again.” 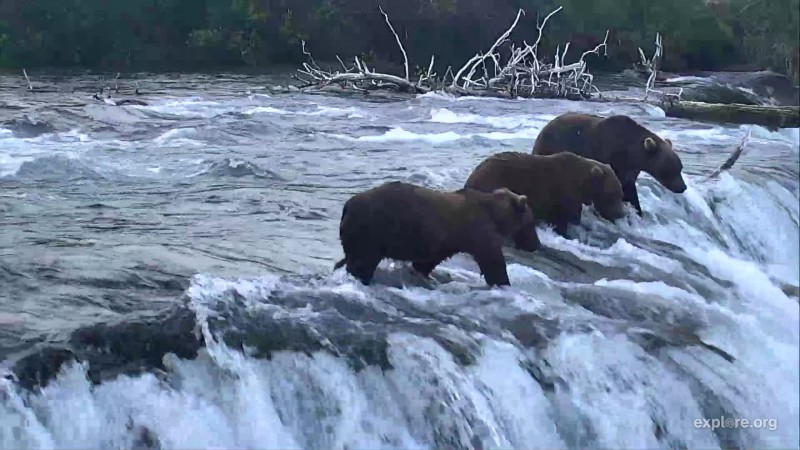 503 continues to have frequent play bouts with various sub adults.  In one memorable encounter the sub adult grabbed 503’s skin and gave it a good stretching before letting it go…. Ouch! 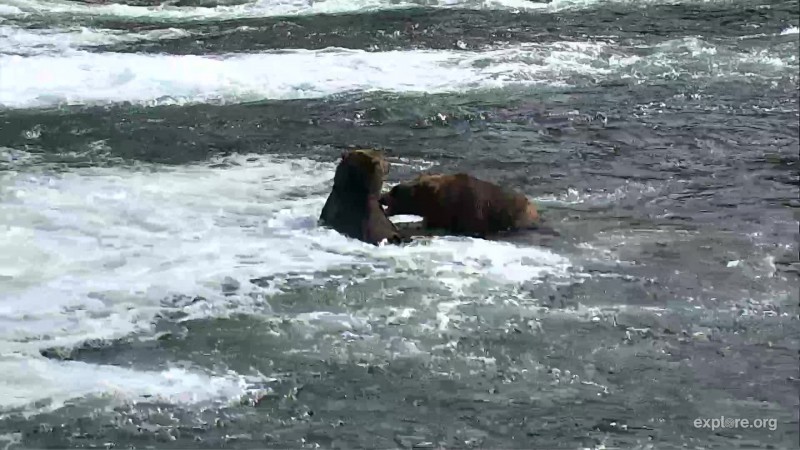 151 Walker returned to the river after a few days absence sporting a good sized wound on his left hip/leg.  We don’t know what happened but the flap of skin hanging from the wound points to some encounter that tore the skin.  151 is showing no sign that the wound is bothering him and has continued to fish and play normally. Explore Fellow, Mike Fitz had this to say about the wound:

” Since 151 was play-fighting earlier today and is actively fishing now, then the wound doesn’t seem to be much of an issue for him. It might produce a recognizable scar next summer.”

151 Walker has a new wound Snapshot by Kerstin59

Ranger Russ provided a picture he took on August 22 of 151 Walker’s injury. 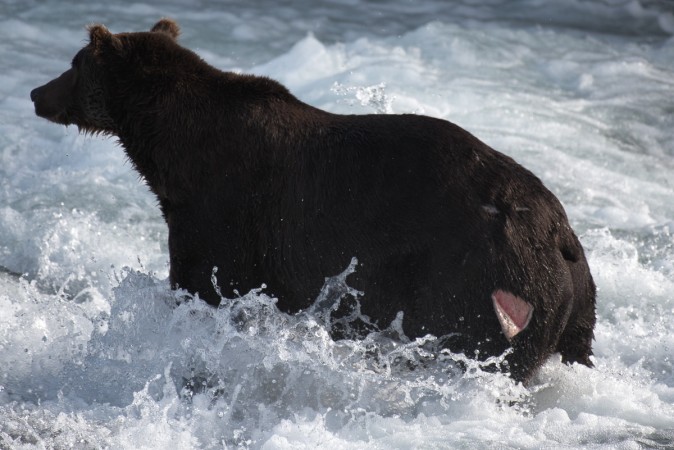 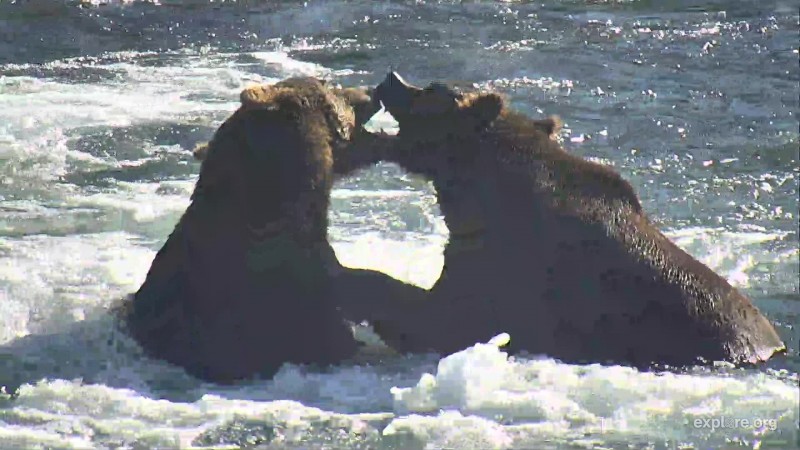 151 Walker also had a few words with 854 Divot the day she showed back up to the falls. 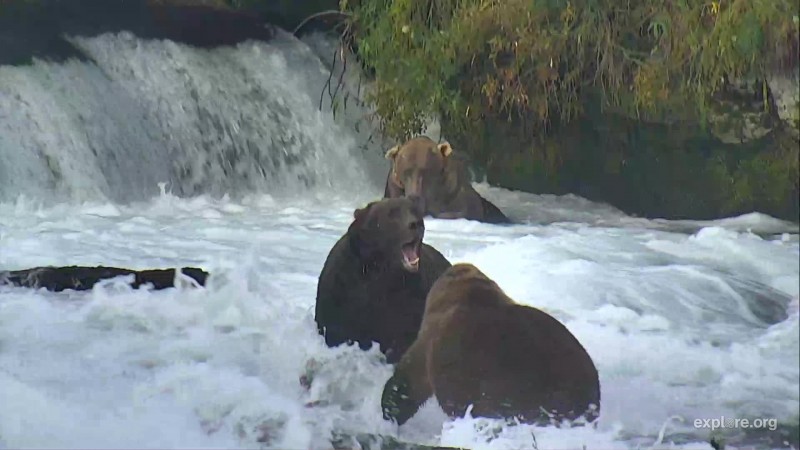 When 747 isn’t exhibiting his dominance and moving bears around at the falls, he still likes to remain nearby…. Even though he might not exactly be vigilant about keeping up with the activity.  The cam caught him sleeping in the river using a rock pillow this week. It’s not uncommon for bears to do this. With their huge size now, moving great distances probably doesn’t appeal to them if not necessary and the water also likely makes their weight seem more buoyant and may be more comfortable than laying on the land. 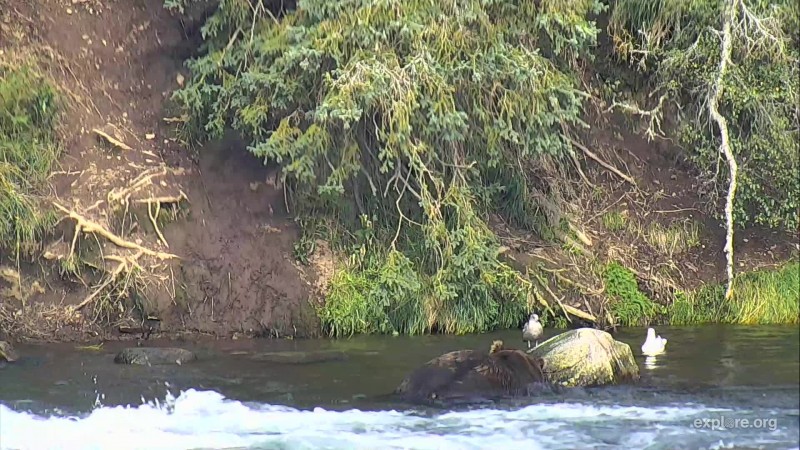 747 naps with his head on a rock Snapshot by jegrabau

804, a small female, and 812, a sub adult male have both had success fishing the lip in August.  804 especially has had some great grabs of some very large fish! We’ve been really impressed with our younger lip fishing bears this season. 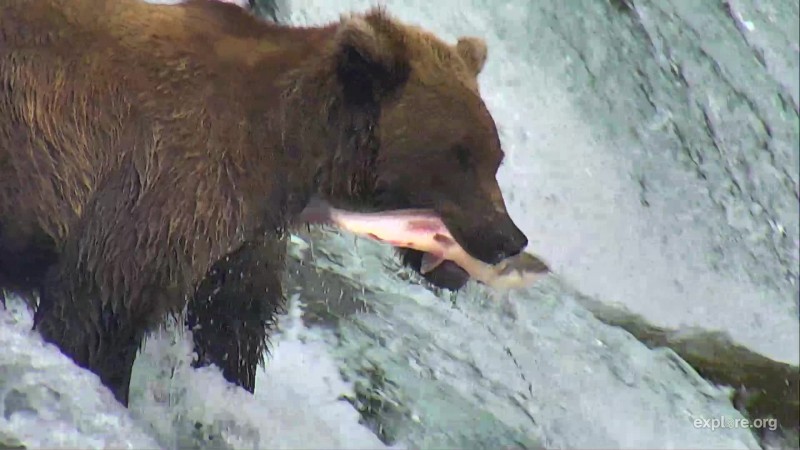 A couple of the adult female bears, 128 Grazer and 854 Divot, have made appearances recently.  Both are looking to be in fine form (really huge) for the upcoming Fat Bear Contest. 128 is looking especially well rounded…. Well okay – since attaining a massive size is a complement in the bear world, we can just call her Fat!  (But maybe we should whisper it?) 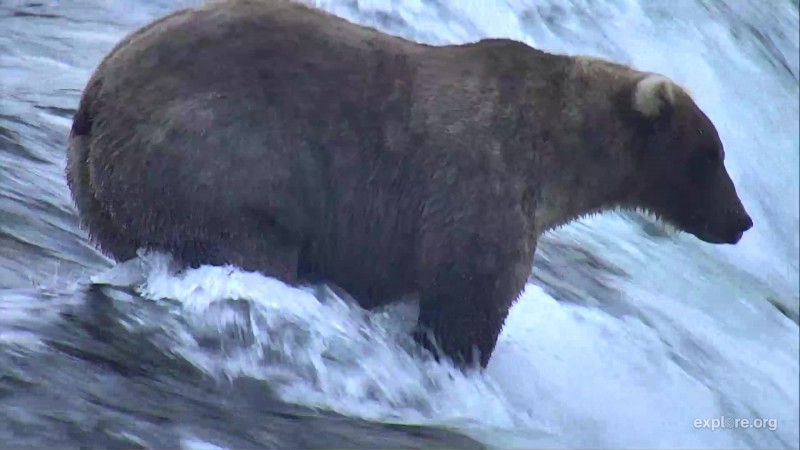 Sub adult bears have continued to entertain us in other parts of the Brooks River.  We have watched them playing and also showing some good fishing technique. We caught this one digging around near the riffles area. 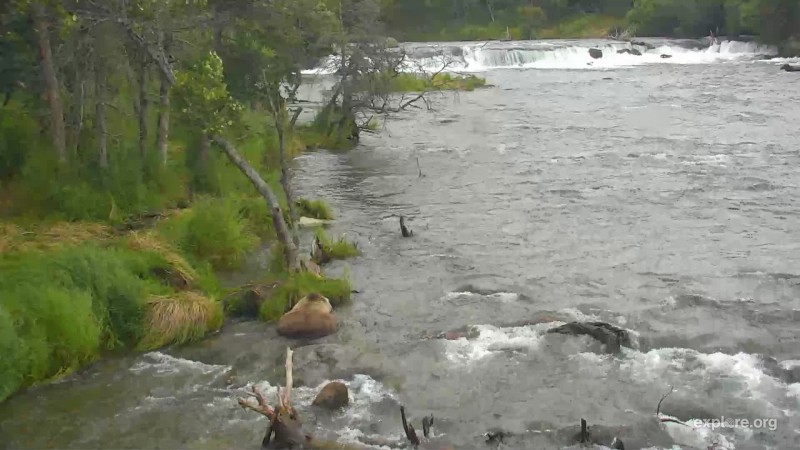 subadult digging around a tree for salmon Snapshot by CarolineB

Another sub adult found something in the Lower River area that it just couldn’t quite figure out what to do with. After tugging, lifting and turning it this way and that, it decided the object was, after all, just a large dead tree with branches. 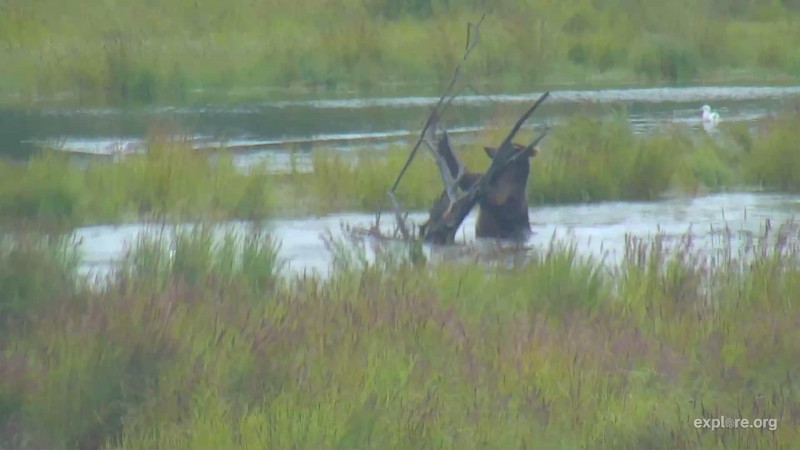 Speaking of dead trees and limbs, the falls acquired some new decoration on Friday, August 17.  A large dead tree sporting branches came sailing over the falls in the early morning light. 151 Walker was already in position in the office area and the arrival of the tree gave him quite a surprise. 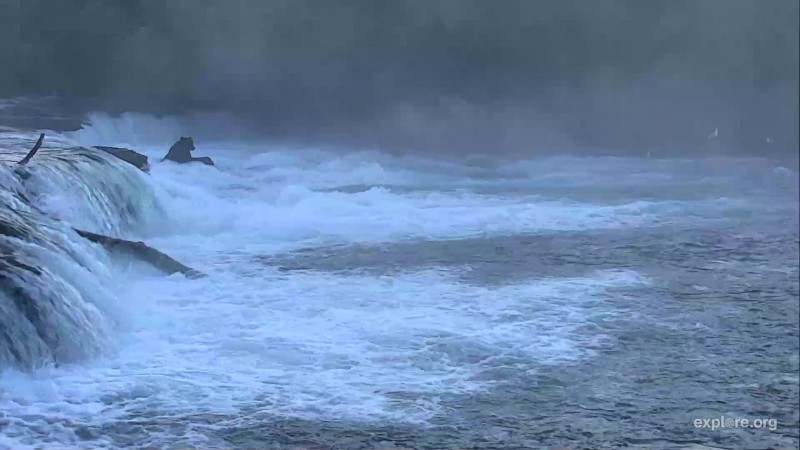 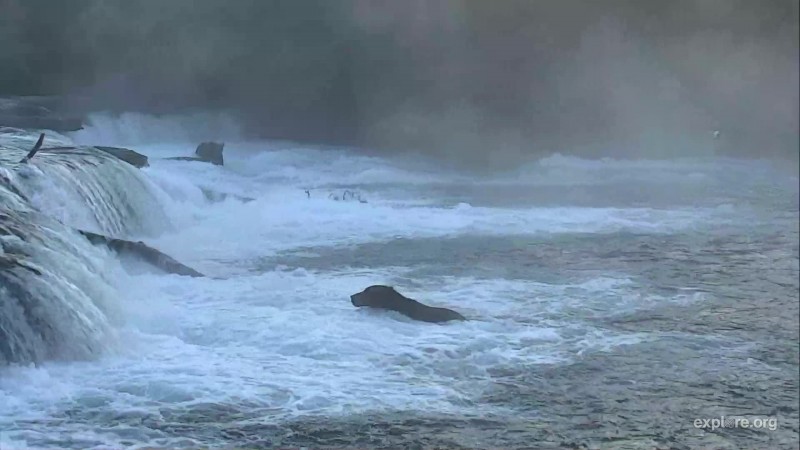 During the storms over the weekend, the bridge on the Lower River was really rocking and rolling and being overwashed by the wind driven wave action and high water.  The winds also washed a lot of logs and debris up near the bridge. Ranger Andrew had this to say about the weather and repairs to the bridge area:

“It has been a WILD few weeks for weather! Yes, the water has risen very significantly, and the INTENSE waves we’ve had over the past two weeks, this past weekend especially, deteriorated some of the river banks, all making it necessary to raise the landings, bolster supports, and tighten the anchors” 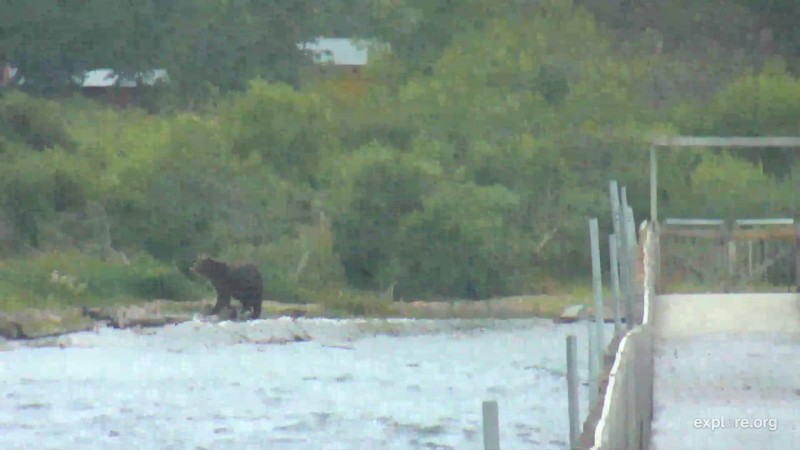 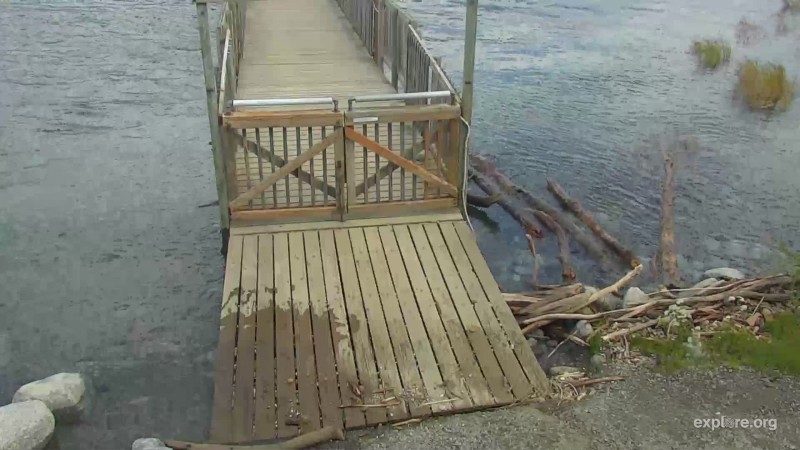 Bridge ramp before the repairs Snapshot by SP-GA 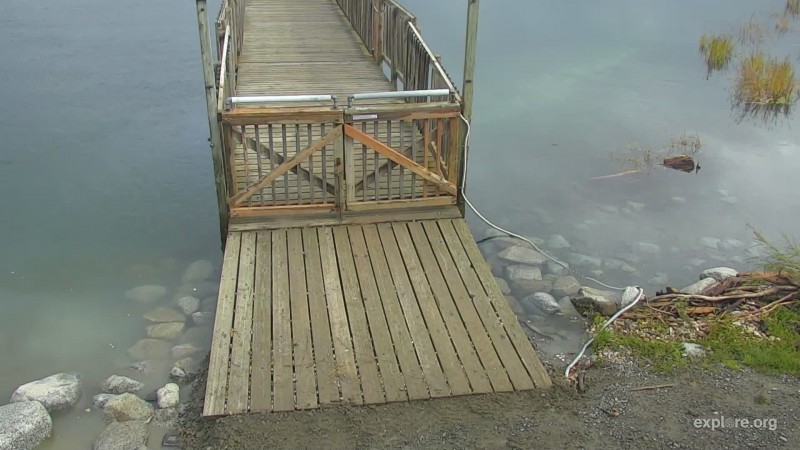 Along with the ever present gulls in view along the river, we’ve also seen some sub adult and adult Bald Eagles, Magpies, and this really great close up (thanks to our cam op!) view of a female Belted Kingfisher. I believe this little bird was advertising for the Birds of Brooks River live chat which happened just a day later. A couple days after the live chat we also saw a magpie sitting atop the bridge gate.  The live chat can be viewed here. Now for our favorite moments:

LaniH: My favorite moment isn’t really a moment but a camera. I still find myself enjoying the low cam view quite a bit. I knew it would be special from the first partial bear pic that made me giggle, 128 Grazers ears. But what has surprised me most about the cam has been the other wildlife that we would otherwise miss if not for this cam, from the  wolf that walked by to the multitudes of Glaucus winged gulls and Mergansers that walk or swim by. We have also seen cubs try and nurse near the cam also. But the surprise close ups of the bears are my favorite, I never knew how busy the bank of the river was until this cam. 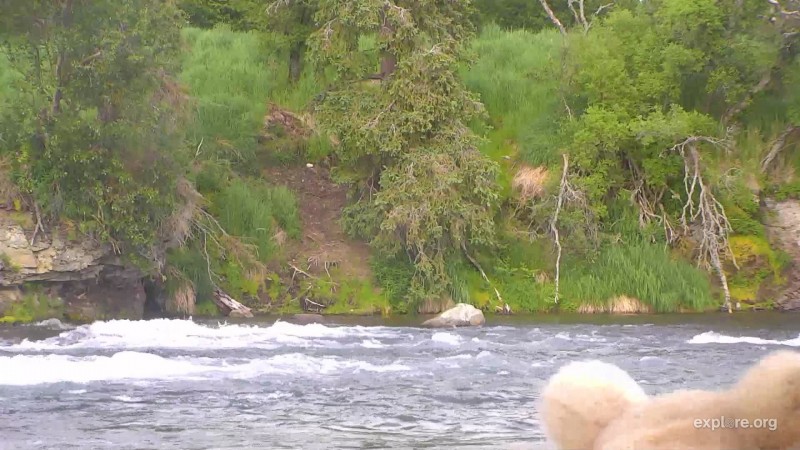 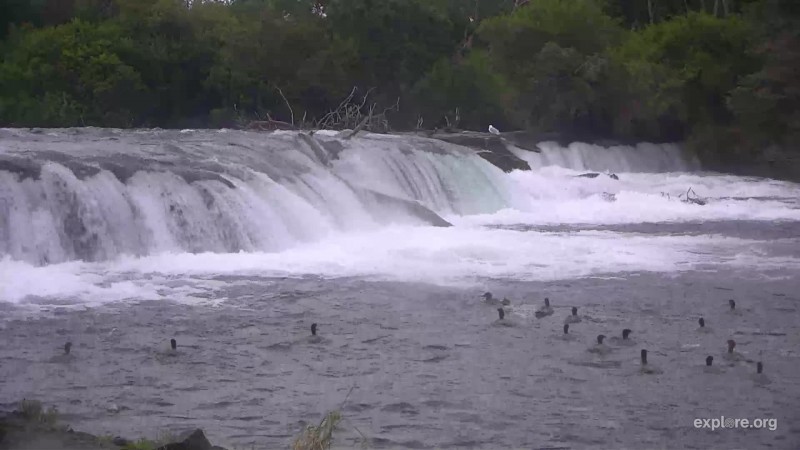 lots of Mergansers swim by low cam Snapshot by Bommy subadult bear looks at the low cam Snapshot by brunicaselli

GABear:  My favorite moment this week was watching 503 and 151 Walker in their numerous play-fight sessions.  It’s so great to see our bears so well fed and comfortable enough to engage in this activity. I love how they seek each other out and try to “start” something!  This pic shows 151 Walker explaining to 503 just how long the fish that got away really was!! 😉 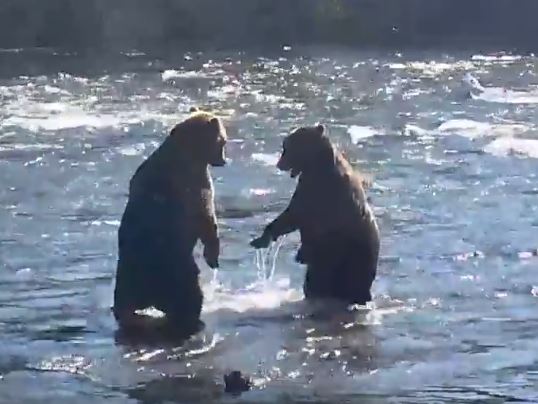 If you’ve ever wondered about the walk along the trail to get to the Brooks Falls viewing platform, Mike Fitz blogged about this walk and how it has changed over the years.  You can read it here.

Mike also shared insights about the line of sight from the Explore.org cams that we view.  You can read that blog here.