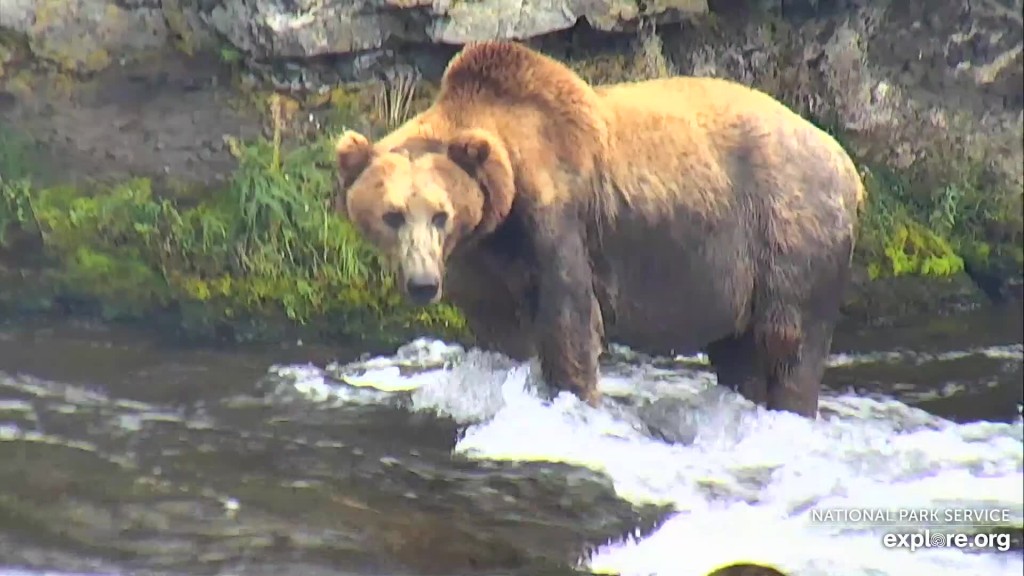 We have still seen high numbers of salmon jumping the falls and schooling near the underwater cam. This season has seen one of the largest number of salmon migrating through Naknek River on record.  Nearly 3,000,000 fish escaped commercial fishing and passed into the River. Some 20% of these fish are thought to enter Brooks River – 600,000! 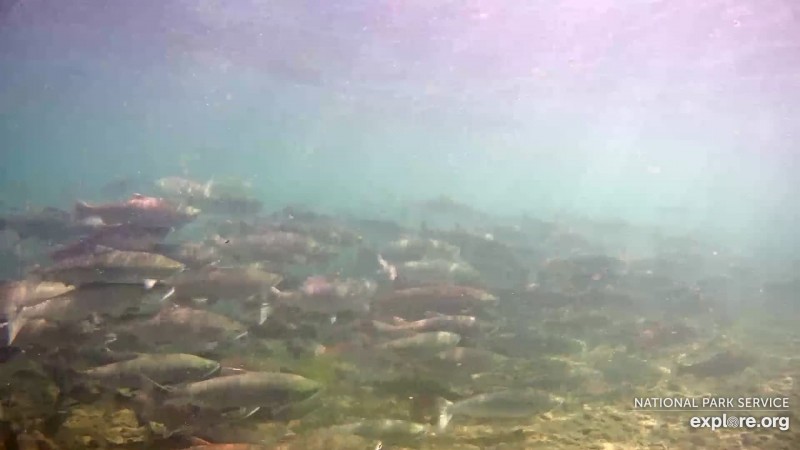 salmon schooling near the underwater cam Snapshot by Bookmom

According to Mike Fitz, the number of salmon still jumping at the falls is above average for this time of year and Rangers reported a count of over 400 fish per minute at one point last week. 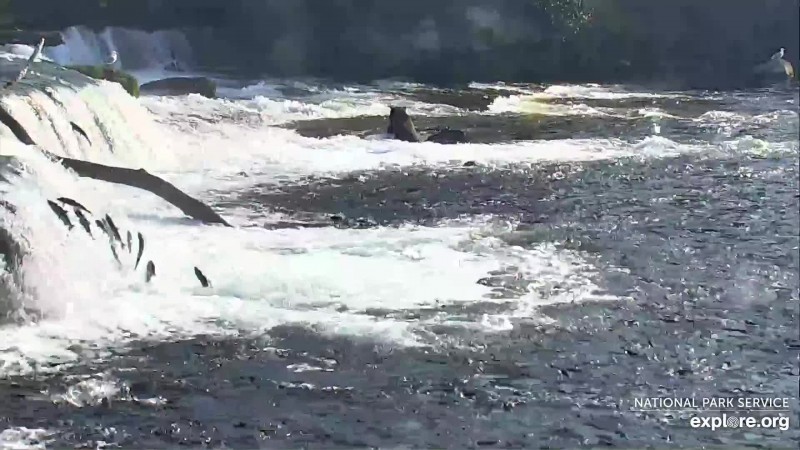 Lots of salmon jumping the falls Snapshot by LaniH

With so many salmon boiling in the river, the bears can seem a little overwhelmed by it.  In this gif, both the bear and the salmon seem slightly confused, with the bear appearing to just be watching the show!

From Mike Fitz about number of salmon caught by bears:

“The salmon at the falls average somewhere between 4 and 8 pounds. No one really knows how many fish bears intercept at the falls, but it is a significant number when you consider that each adult bear can easily catch and kill 10-20 fish per day when salmon are abundant. The bears though, are often overwhelmed by food at the falls. When you see dozens of salmon jumping per minute, there are far too many salmon for the bears to catch and eat and in any given year several hundred thousand salmon typically migrate through Brooks River. I wrote a blog post about the total number of salmon a bear can eat in a year, which you might find interesting”

Of course bears aren’t the only ones enjoying the salmon bounty.  This week we watched 3 animals vie for the same salmon. A bald eagle laid claim to the salmon along the Lower River shore.  When startled, it tried to fly off with the fish, but dropped it, where it was taken over by a gull. Ultimately a bear came along chasing off the gull and 435 Holly finished the salmon. 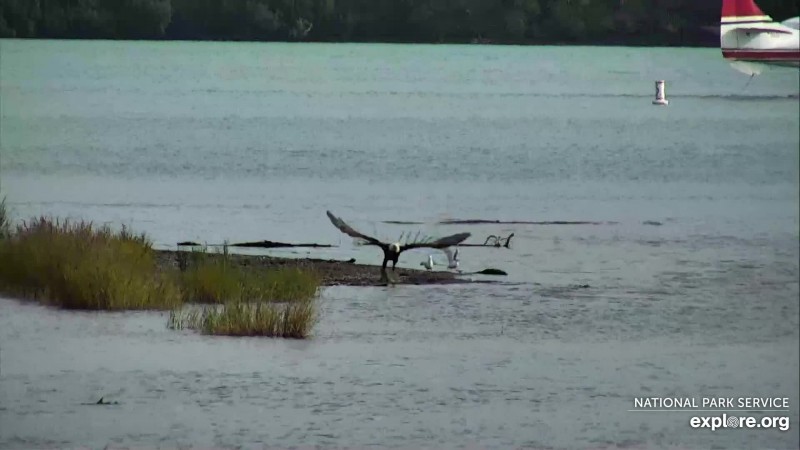 This week we have seen continued interactions between 856 and 68, there has been no change in the hierarchy between these two. Mike Fitz had this to say:

“68’s behavior this morning (July 31) is typical of the reactions I’ve seen him display when confronted by 856. He stands and takes it but doesn’t reciprocate the challenge. He waits until 856 breaks off the encounter.” 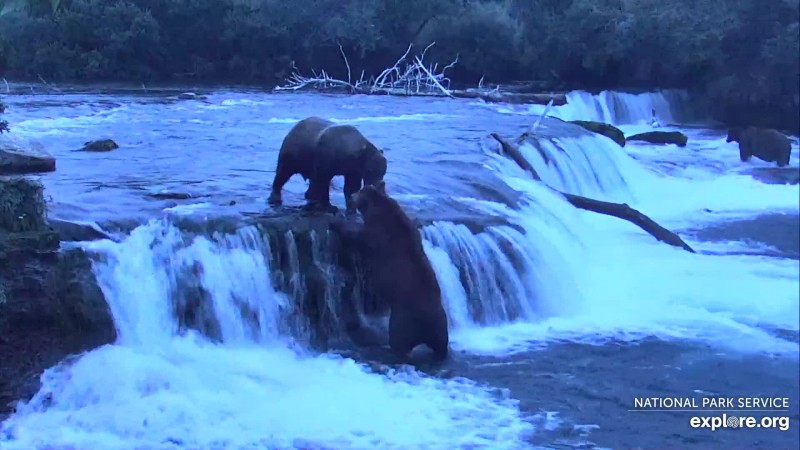 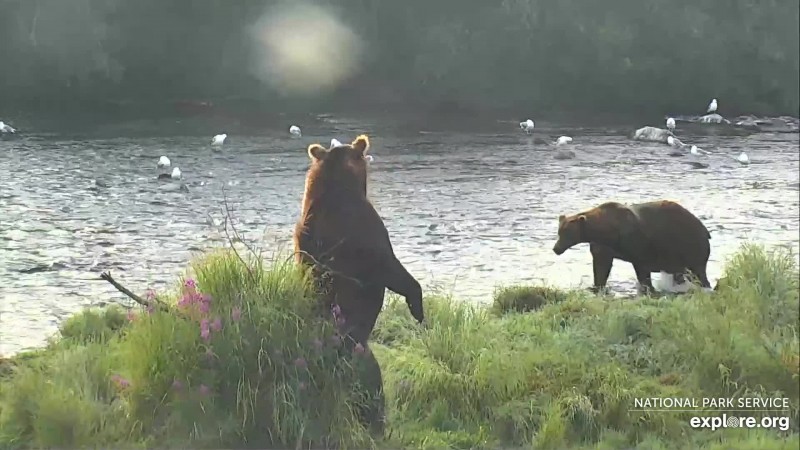 We have seen the appearance of some new unknown bears at the falls this past week. Most notably an unknown boar with a large shoulder hump. He has been seen trying to figure out how to fish in different areas of the falls most notably the far pool office area. Mike Fitz was asked about the possible age of this bear:

“This bear appears to be a mature adult, but not old like Otis so I’d say he’s at least approaching his early teens or mid teens (a vague answer I know but it’s the best educated guess I can give)”

Mike was also asked about the size of his shoulder hump:

“Like fur color, shoulder humps on brown bears vary by individual. Some–like this bear, 284, and 634 Popeye–have very prominent shoulder humps. On other bears, like 747, the shoulder hump is not as noticeable. The hump is created by the muscles attached to the bear’s shoulder blades (scapula). Along with long front claws, the hump is thought to be an adaptation that help brown bears dig. Black bears, in contrast, lack a prominent shoulder hump and their claws are shorter and more curved, a combination of traits that suits them better in forested environments where climbing trees is an important skill.” 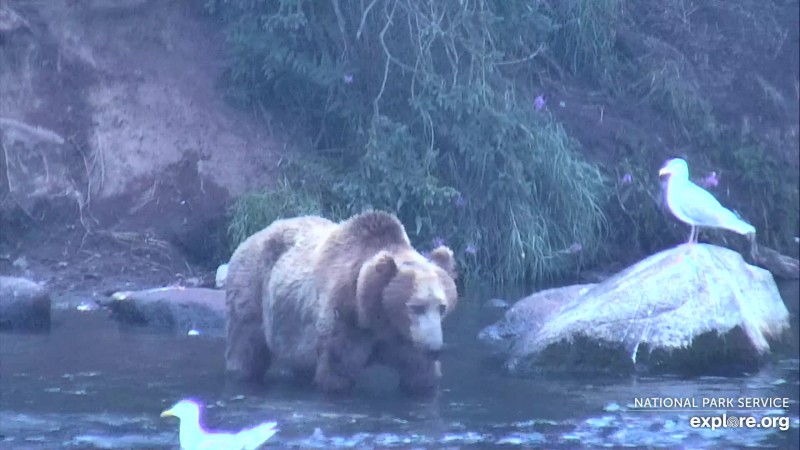 Ranger Naomi took this pic of the unknown boar on July 31. 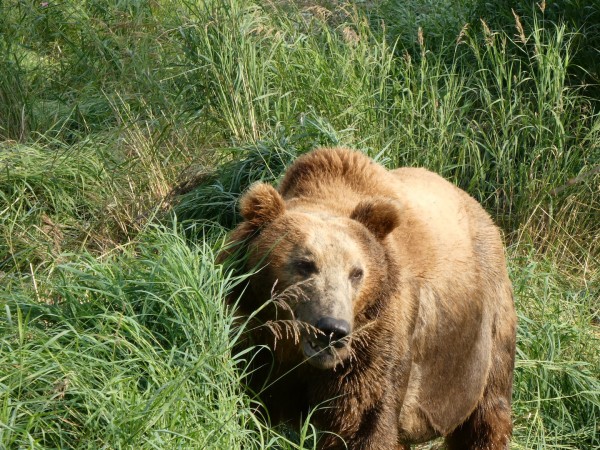 This is an unknown sow we have been seeing around the falls this past week. She has white claws and mainly sticks close to the island or far bank. Although she did go into the far pool and take a swipe at 503. 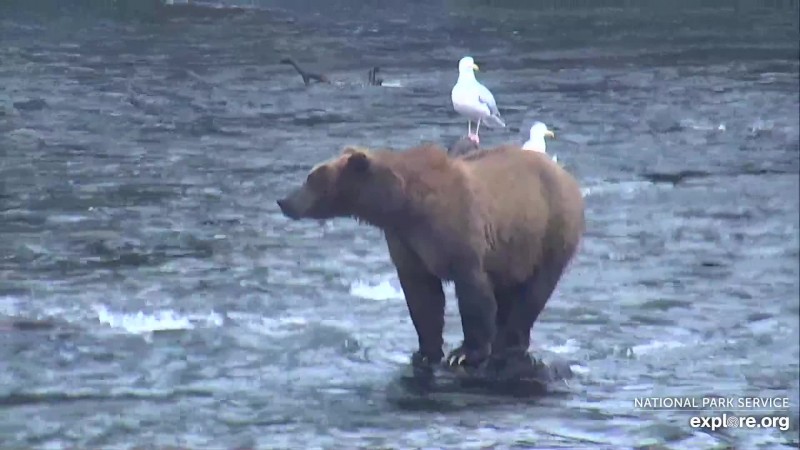 The unknown boar with the large shoulder hump was involved in a fight with 801 when he tried to pirate a salmon from him. 801 had the other boar down in the river, before breaking off the attack.  The other boar got right up, appearing to be okay, and backed away.  Mike Fitz had this to say about the encounter:

“It shows that stealing fish is a risky venture. Since the other male had already stolen one fish from 801, it doesn’t surprise me that he returned for another try.” 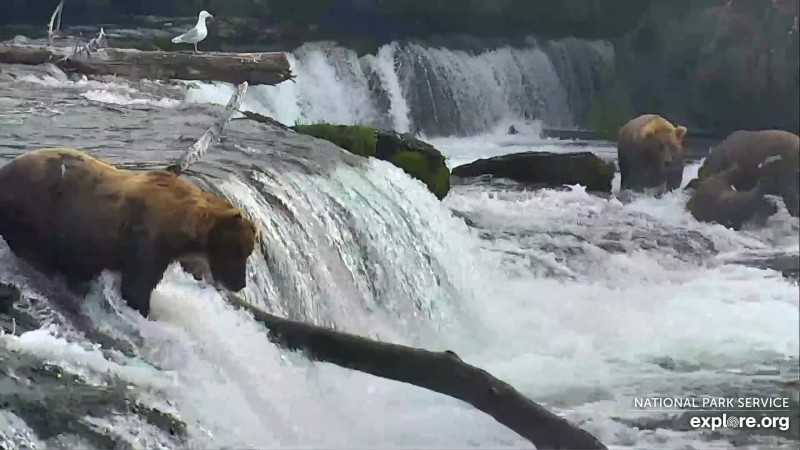 801 pins the unknown boar to the ground Snapshot by Owl_And_Osprey_Lover_CA2017

We have seen quite a few wolves around the river this year. This past week a wolf chased 708 Amelia and coy on the lower river. 708 Amelia was scavenging with her coy when a wolf approached out of the tall grass. The wolf watched the coy, creeping closer. 708 Seemed unconcerned but kept an eye on the wolf. Until the wolf charged after her cubs, she then placed herself in between the wolf and her cubs. 708 and coy continued to walk down the river bank and the wolf followed and again charged trying to get her cubs. 708 charged after the wolf as her coy raced away down the river bank. Both coy and 708 Amelia were seen later in the day. Mike Fitz had this to say regarding wolves chasing bear cubs:

“In 2013, when I was at Hallo Bay on Katmai’s Pacific coast, I once watched a lone wolf run toward a mother bear with two young cubs. The wolf appeared to be testing the family, looking to see if the cubs would run and scatter, leaving them vulnerable to attack. It didn’t work in that instance. The cubs stuck by mom and after about a minute the wolf lost interest. Wolves can kill bear cubs though. The reverse is true as well. Bears can dig wolf pups out of a den and eat them.”

Mike Fitz wrote a blog about this encounter and it can be read here. wolf lunges at 708 Amelia and coy again Snapshot by Bearsong

A few other disagreements between bears were also seen this week. 747 approached 128 Grazer on the lip. 128 Grazer was having none of it and smacked 747 across the face. 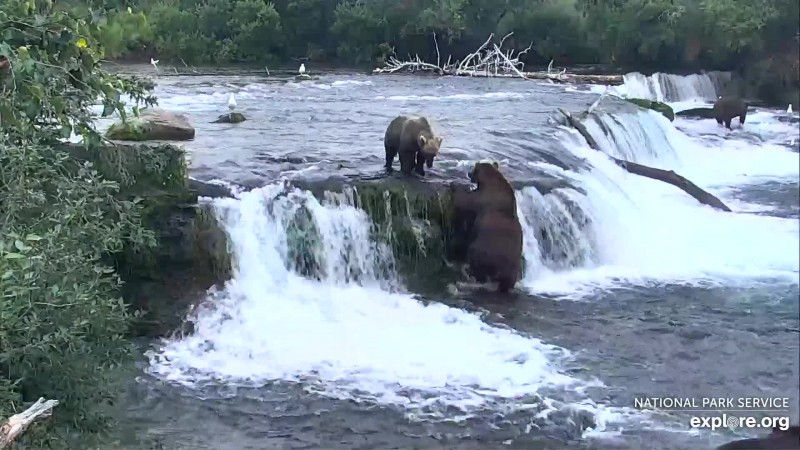 The underwater cam has given us some great views of salmon schooling and bears swimming or playing by the camera. One bear was actually seen trying to grab a salmon. bears playing by the underwater cam Snapshot by Owl_And_Osprey_Lover_CA2017

Plenty of subadults were also playing on the spit and up spit road. One day we counted 7 subadults walking up spit road as they played along the way. A subadult that was part of a group on the spit seemed to want another subadult to play and pay attention to him/her.  The subadult grabbed the other bear by the butt and pulled.

482 Brett has brought her yearlings to the falls this past week a few times. They were in the far pool when the unknown boar with the shoulder hump tried to sneak by into the office. 482’s yearlings were frightened and 482 Brett had words with the boar. 482 Brett and yearlings Snapshot by eaglespirit

719 and her coy were seen near the new bridge. 719 took an interest in the bridge and stood up on her hind legs to investigate this new structure. She then used one of the pilings to scratch her back on and one of her coy copied her. 719 investigates the bridge Snapshot by Larinor 719’s coy scratches back on bridge Snapshot by Corrwest

One of the sows with a single coy had been identified as 900, a sow first observed and given a number in 2018.  We learned this week that 900 has lost her cub. Mike Fitz said this regarding the loss:

“The evidence, although circumstantial, points to 856 separating 900 from her cub. We only saw a chase but not anything more.”

And this, regarding 856 having possibly killed the cub:

“Other bears have certainly killed cubs at Brooks River. 24 BB who was very dominant is an example. But, there are many other cubs killed by bears that no one witnessed (we just found the cub or the skull) and it is not just very dominant bears who kill cubs. Younger bears will kill cubs as will females, albeit much more rarely than adult males.” We also had news about the yearling belonging to sow 505 that had appeared quite ill for a time.  Ranger Naomi reports that the yearling appears to have recovered. 505 seems to have left the Brooks River area prior to its recovery so it is currently a lone yearling/subadult.  It has been seen finding and eating fish scraps. Ranger Naomi provided this photo of it from July 26 We saw the return of two bears that had not been seen in a while:  89 Backpack and 854 Divot. Mike had this to stay about seeing 89 Backpack again:

“89 showing up is a bit of a surprise because when he’s left in the past he usually doesn’t return until September.” 89 Backpack in the office Snapshot by Blair-55 854 Divot above the far pool Snapshot by CamOp Scout

Ranger Naomi and Ranger Barbara did a live chat about Sows and Cubs.

Meet 503 in this week’s installment of Bears of Brooks Falls. 503 back float Snapshot by LaniH