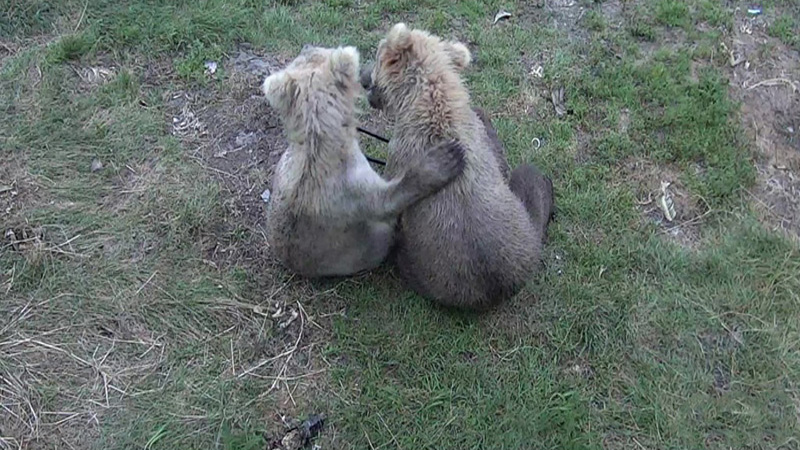 A Bear and Wolf Encounter

While brown bears are the most frequently seen large mammal on the bearcams, they aren’t the only large carnivore that inhabits the Alaska Peninsula. Gray wolves also make Katmai their home. When sharing habitat and feeding on many of the same food sources, brown bears and wolves compete with each other to survive in a world of limited resources. Sometimes that competition leads to direct confrontations.

In the video above the mother bear, identified as 708 Amelia, initially displays little overt interest in the wolf. Amelia turns to watch it, resumes a brief search for fish, then returns to her cubs’ side. Her behavior could be interpreted as unconcerned. A single wolf typically isn’t a threat to an adult bear. However, Amelia does not ignore the wolf. More than once she looks toward it, an obvious sign that she’s paying attention to its movements.

The wolf prowls upstream for a moment before approaching the family. With all three bears now facing it, the wolf takes a few more steps in their direction. Amelia’s cubs, at only seven months old, are still experiencing much of the world for the first time and their behavior near the wolf might reflect their inexperience. The cubs react to seeing the wolf by standing on their hind legs and looking toward it. Standing in this manner, no matter a bear’s age and level of maturity, is an information gathering posture helping bears to better see the object of their attention. It can be followed with any number of potential behaviors — defensiveness, indifference, curiosity, etc. In this instance, the cubs react by running away. Amelia follows, as does the wolf.

Before I continue, I should say that Amelia and her cubs are fine and have been seen fishing the river since their wolf encounter. Why did the wolf approach the family though? Was it trying to prey on the cubs?

While their diet and biology are different, bears and wolves compete for food across their ranges and interact in numerous ways. In Yellowstone National Park, where interactions between wolves and bears are perhaps most thoroughly studied, the two species frequently compete over animal carcasses with bears often usurping a wolf’s kill. This was perhaps the circumstance last summer when I watched a bear and two wolves at a moose carcass along the middle stretches of Margot Creek in Katmai. Instances when wolves or bears kill each other are rare, but it happens too. In Yellowstone, biologists have confirmed that wolves can kill bear cubs, and it has happened at least once with a polar bear cub in the Canadian Arctic. In Katmai, the documented encounters between the species include wolves stealing fish from bears, wolves harassing courting bears, wolves displacing bears from a moose carcass, bears briefly chasing wolves, wolves traveling with bears, and wolves fishing alongside bears.

What happens when a wolf approaches a waterfall full of bears?

This wolf appeared quite nervous as it tried to poach salmon carcasses from the riverbank this week.

Perhaps my most memorable sighting of a wolf and a bear together happened in Hallo Bay in 2013. Like a Sasquatch sighting, I didn’t have a camera with me to photograph the event but I remember it well.

Hallo Bay is a spectacular area of Katmai’s Pacific coastline ringed by tall volcanoes and filled with bears. One morning at base camp, I moved through the grass to the edge of the beach. I could see a mother bear and her three spring cubs clamming on the exposed mudflats just as a single white-furred wolf approached. The wolf trotted then ran toward the bear family. The cubs, although alarmed, didn’t run. They stayed as close as they could to their mother’s side as the wolf circled and rushed the family again. The mother bear was quite defensive. She charged the wolf but never strayed far from her cubs, perhaps realizing that if she chased the wolf then her cubs would be left alone and exposed. After about two minutes, the wolf lost interest and trotted away calmly. The bears watched it for a moment then resumed clamming.

Perhaps the wolf near 708 Amelia as well as the one I watched at Hallo Bay were testing the bears, probing the families for vulnerabilities. By approaching a mother with young cubs, a wolf might cause cubs to scatter in multiple directions, leaving one or more exposed to attack. The “test” isn’t without risk for the wolf of course. Wolves must respect the strength and power of bears, but they need not worry about a bear’s speed. A healthy wolf can easily outmaneuver a fully-grown bear, making the encounter far less dangerous for them as it would be for a person.

Surviving in Katmai often means taking risks. Mother bears risk their own safety as well as that of their cubs when they fish at Brooks River among dozens of other bears. Wolves risk their own physical well-being defending territories, while hunting of large prey like moose and caribou, and when they approach a bear family. Recognizing and taking advantage of opportunity, whether that is a salmon or a vulnerable small animal, can be the difference between life and death in a place where survival is far from guaranteed.