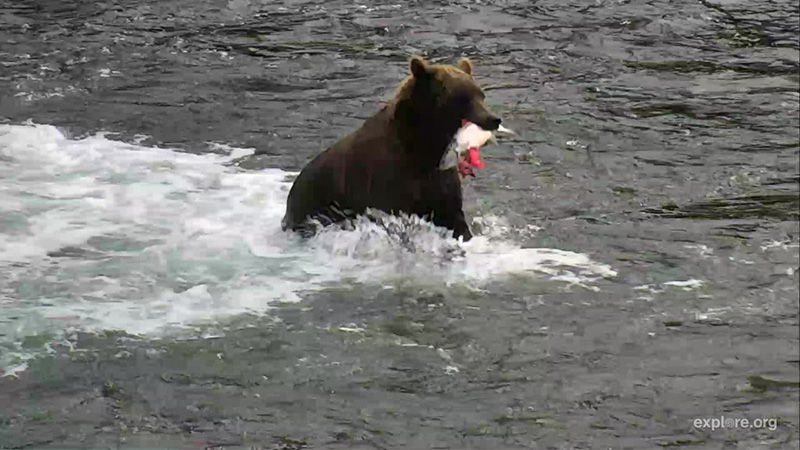 As we come to the end of August, sub adults continue to abound and certainly keep us entertained!  I don’t know about other viewers, but I continue to be amazed at the things I’ve seen with sub adults at the falls.  503, a 4 ½ year old, and 719, a 3 ½ year old, have been very successful and very bold in fishing the falls area with older male bears.  503 Cubadult spends a lot of time in the jacuzzi and 719 will get heart-stoppingly close to large males like 68 and even 747 trying to fish or beg for fish in the far pool and island. 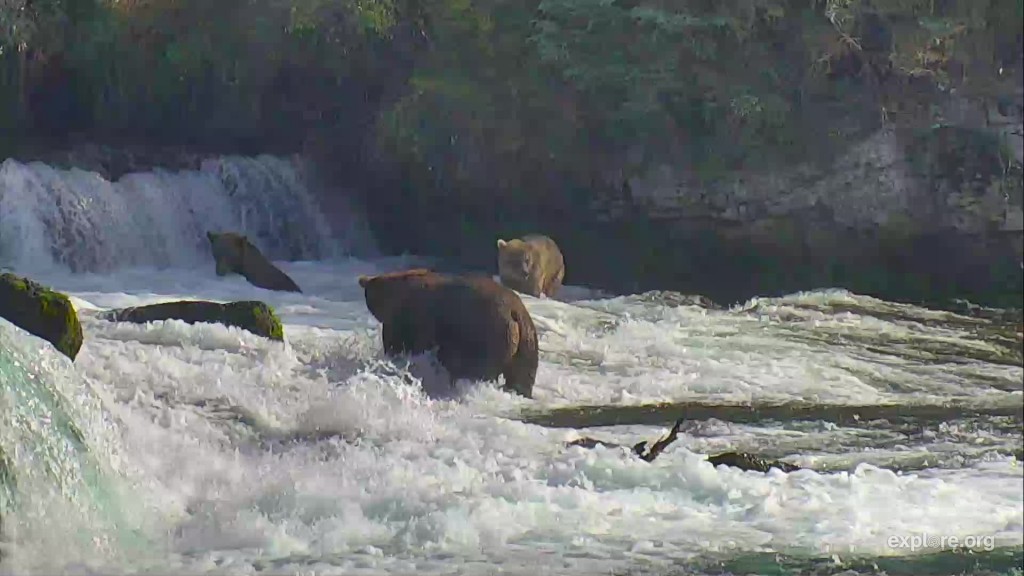 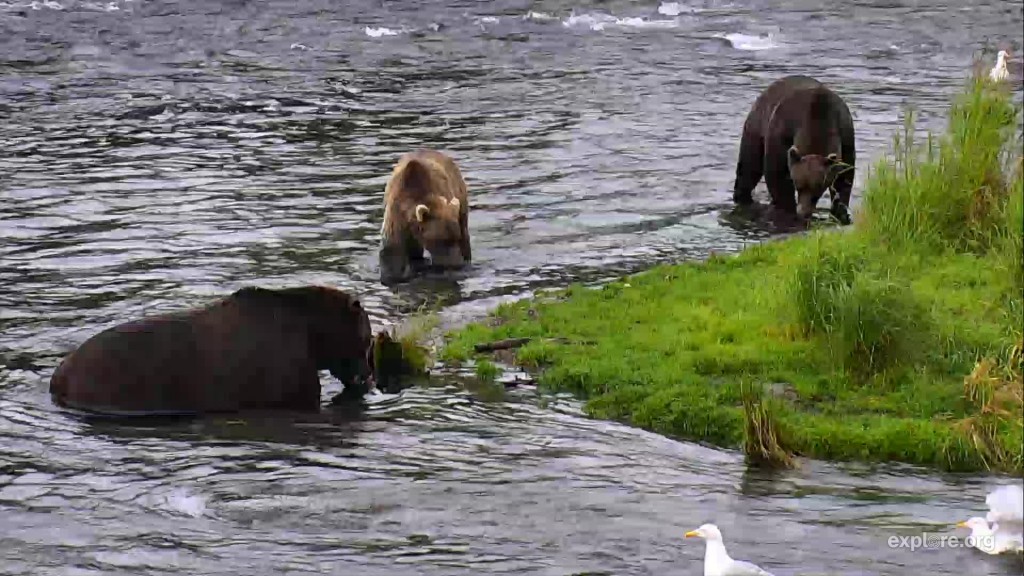 She seems undisturbed when the males charge or chase her off and continues to return again and again. Both of these bears have had remarkable success mastering the falls fishing techniques.  But there have been many other as yet un-numbered sub adults also fishing near the falls with good success. One particularly notable sub adult (who some think may be one of 402’s emancipated cubs) has been fishing the lip this week.  Yes, I really did say fishing the lip!!  We think he/she spent some time sitting up on the lip figuring out the fishing options and then proceeded to stand on the edge and catch fish! 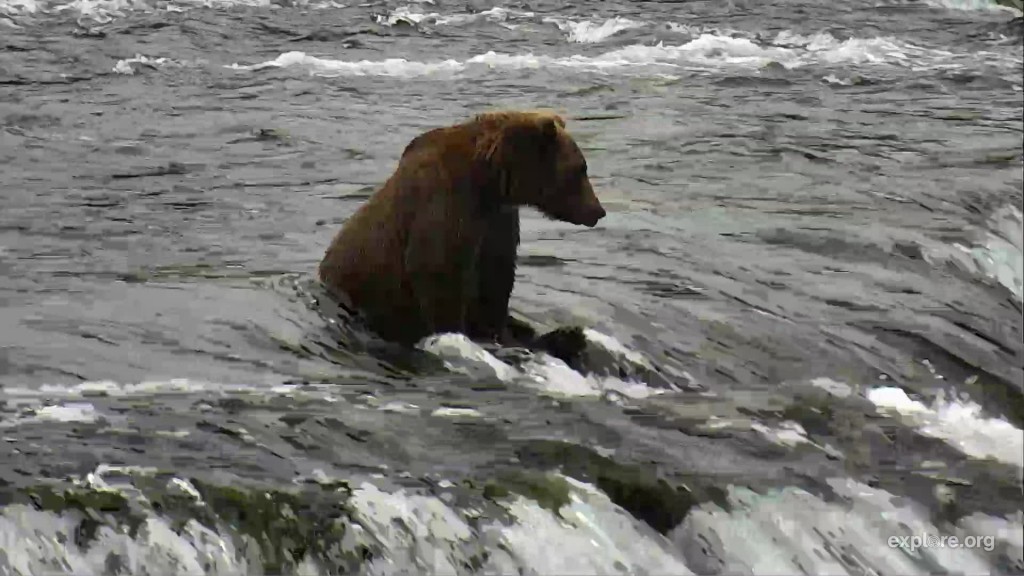 Subadult figuring how to fish the lip

At first, the catches were more like captures – the fish seemed to be grabbed with the claws as they crested the dam.  But after a couple days, we witnessed fish being caught out of the air in the sub adults jaws!   We’ve seen adult bears who have taken longer than this to catch this many fish on the lip. 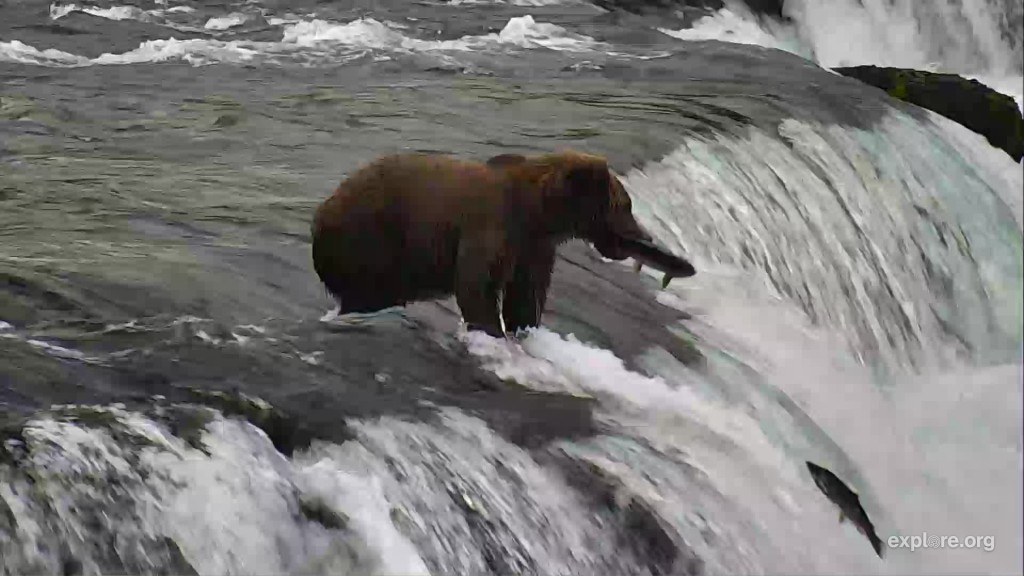 When the subs and cubs aren’t fishing, they have been having great fun with some new play toys around the falls.  Namely fallen, or half fallen, trees!  One that has not quite completely fallen, hangs out over the water.  The small bears were immediately drawn to it, climbed on it and bounced up and down, looking like they were on a diving board.  The other one is a fallen dead tree or bunch of branches out in front of the viewing platform.  It has been used as a scratching post, a clawing post, a “teething” branch, a prop and a jungle gym.  It’s great to see the young cubs and subs have some fun.  If seeing 503 Cubadult  “playing” with 755 Scare D Bear is any indication the older bears are also having a little fun.

128 Grazer provided us with a heart stopping moment when she arrived to the falls and wanted to fish the far pool, which was occupied by 747. She and the cubs approached the office area and 747 walked forward and rounded table rock and 128 Grazer charged him, he then ran after her and she charged him again. The confrontation can be seen here. Later in the day 128 Grazer came back to fish the lip and she had another confrontation with 747, who left the J to charge her and the cubs. 128 ushered the cubs up the fish ladder then came back and charged 747 back down the fish ladder. 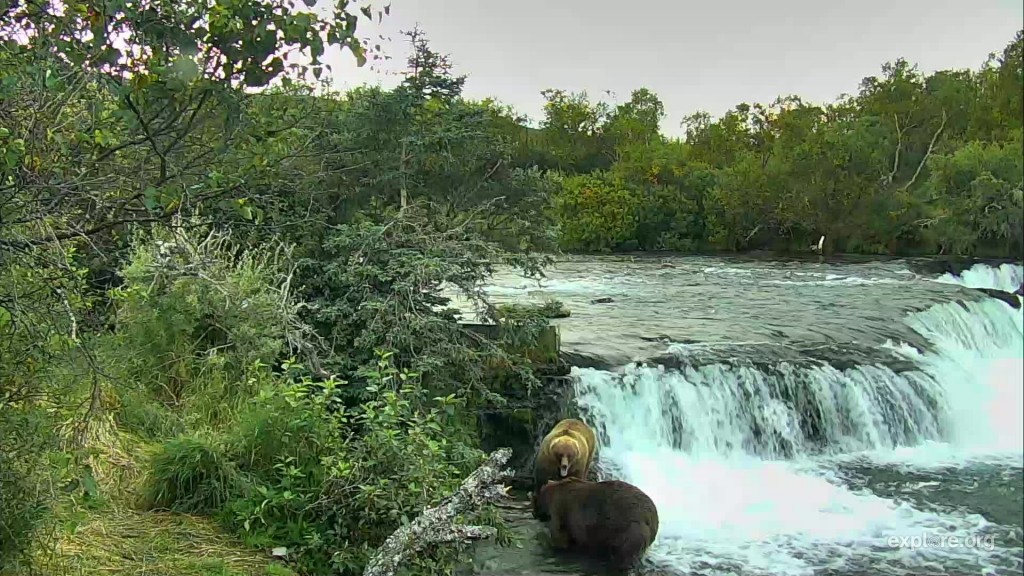 708 Amelia’s cubs also ran rampant around the falls and riffles. In particular they chased 719 twice trying to get a salmon she had caught. The first time she was able to out run them but the second time, they caught her above the falls, and she dropped her salmon and one of 708’s cubs got it. 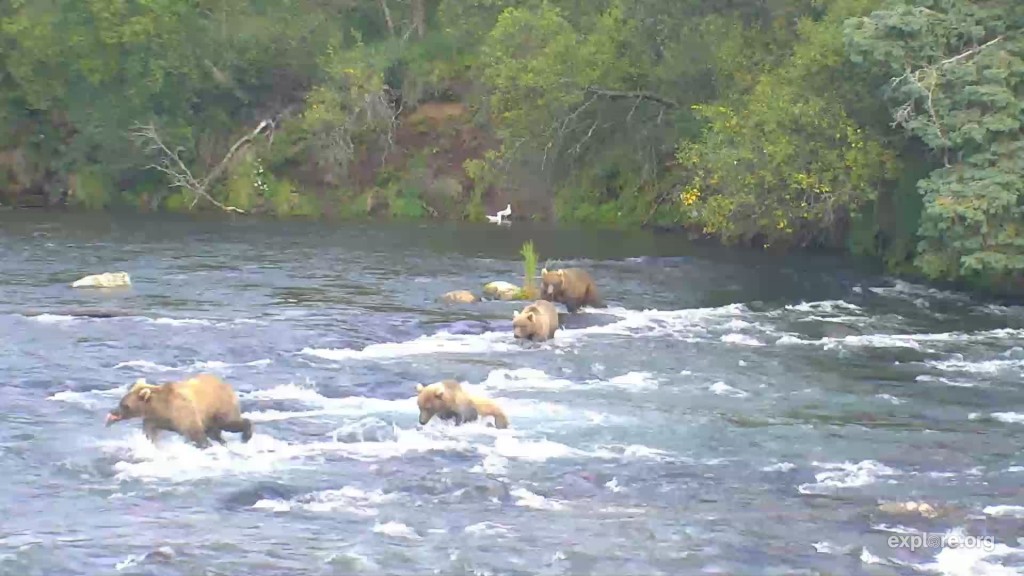 Subadults were also seen begging and trying to steal salmon from each other. A favorite one to beg from happens to be 503. His adopted sister especially likes to beg and steal fish from him. 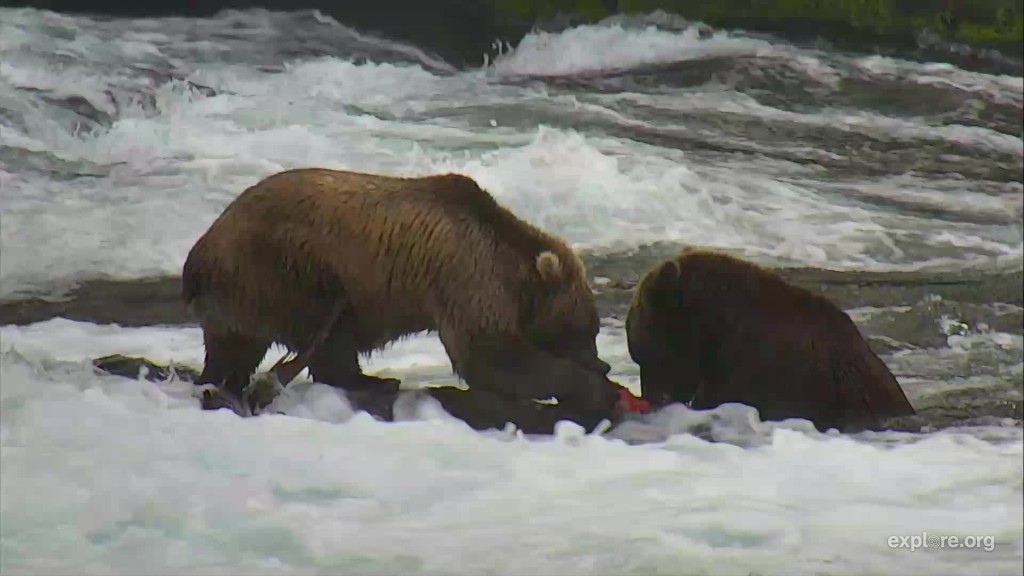 A subadult was also seen using the most unusual fishing style on the bank of the riffles, laying down on the bank with his head in the water. 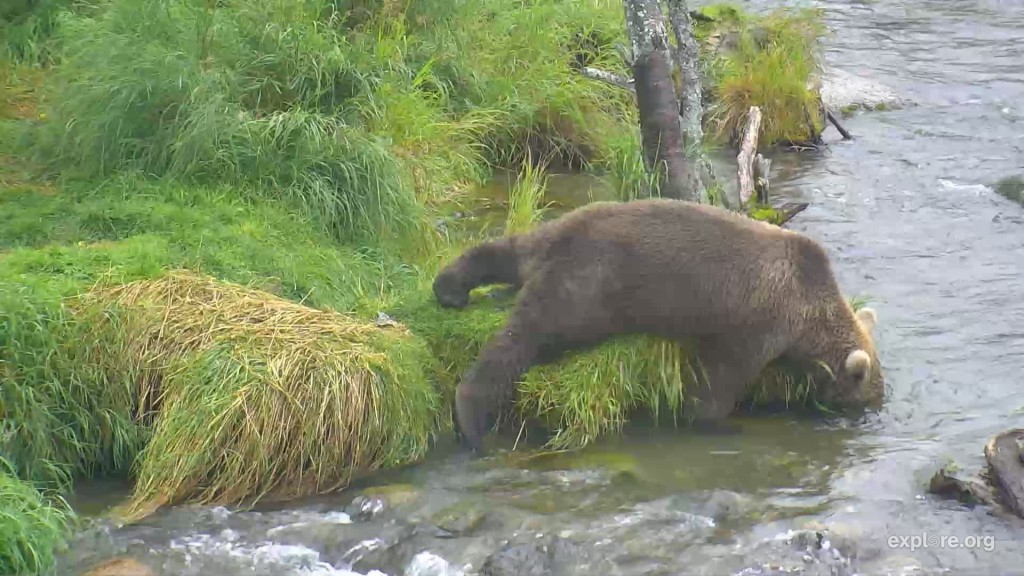 Subadult laying down looking for salmon

Going into September, we should start seeing the return of some of the early summer bears who have been away for some weeks.  They’ll be drawn back to the river to feast on the dead and dying salmon who have finished spawning.  Be aware that you may not recognize some of the summer regulars in their lush fall coats!  We will likely be thinking we are seeing a few “new” bears, only to find out they are our old familiar numbers that we need to learn to recognize all over again!  There will also be some bears who only are seen on the river in the fall months in the mix.  If you don’t have a copy of the Bears of Brooks River ebook downloaded, go here and get it.  There are many photos of bears in spring/summer and also in fall that will help you as you try to guess who you are watching.