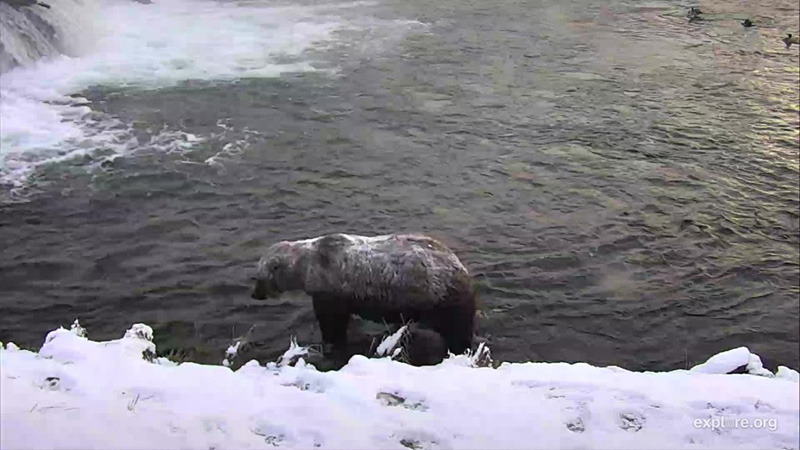 This past week we saw a lot of views of the beauty of the Brooks River area on the cams.  We had great views of the snow covered mountains around the area, saw more snow falling on the river, and some gorgeous sunrises.  It was almost breathtaking to watch the sun come up, with a Bald Eagle sitting in the tree and the river sparkling in the morning light! You can watch a video of those moments here. 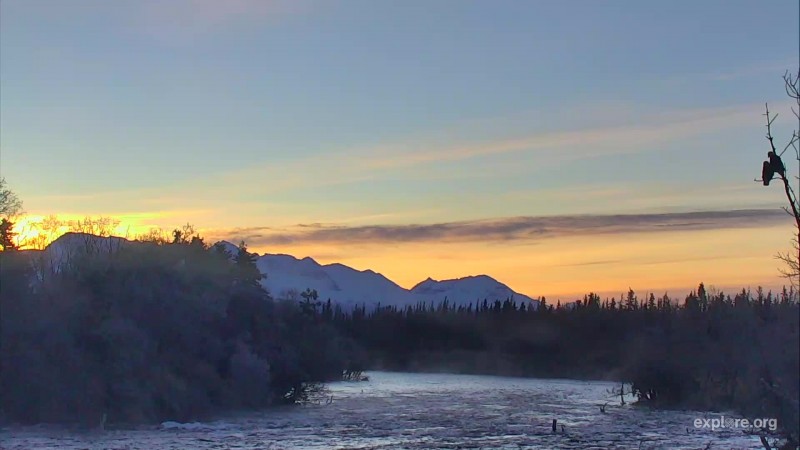 Sunrise with eagles in a tree 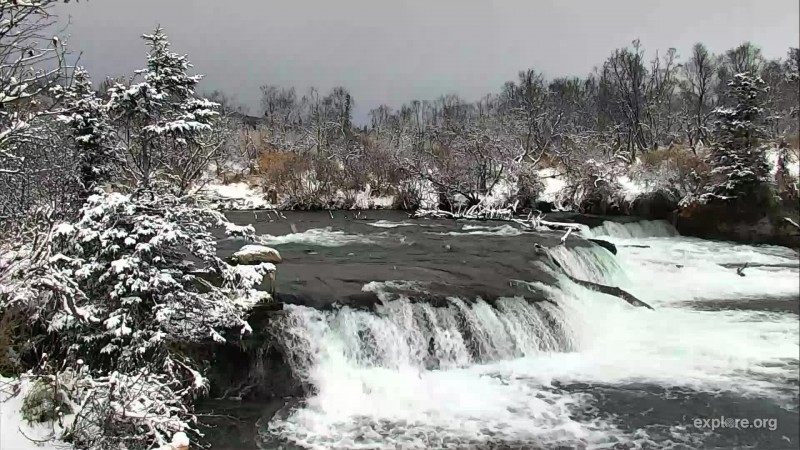 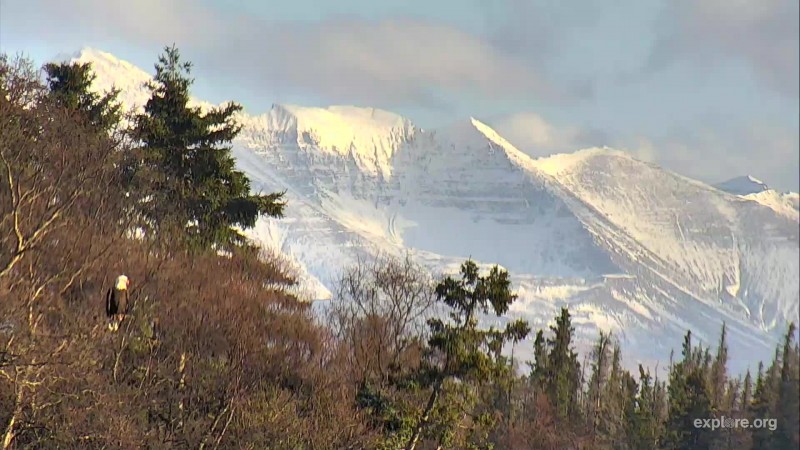 Bald Eagle with Mount Katolinat in the background

Snow fell again giving us more beautiful scenery, views of bear and bird footprints in the snow and another demonstration of how well insulated the bears are as the snow just accumulates on their fur with no heat escaping their bodies to melt it. 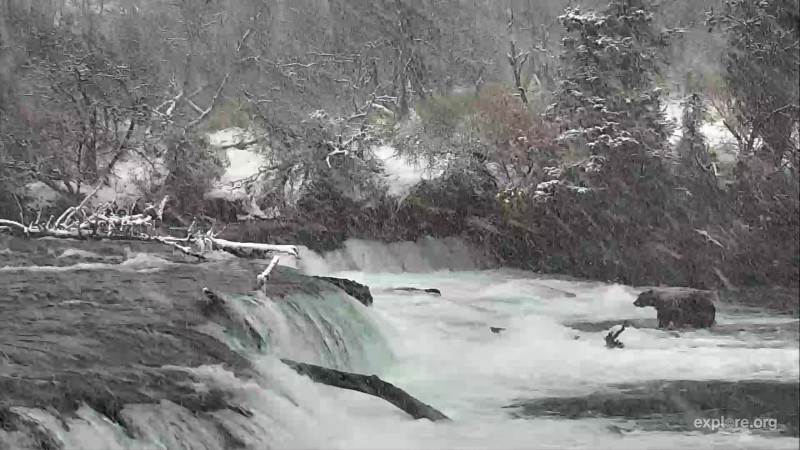 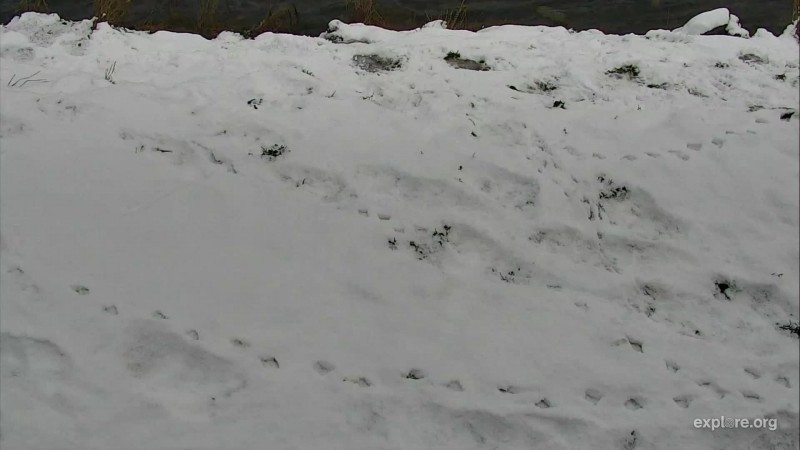 Bear and bird footprints in the snow

Later that same snowy day we saw 708 Amelia and cubs along the river bank in the riffles looking for salmon and any leftover scraps. They lounged in the snow and you can see how well insulated they are from the snow, given that what was on them didn’t melt. 708 Amelia and cubs then noticed another family group approaching and they quickly left and headed up to the falls. To the cam viewers surprise it was 708’s daughter 284 and her cubs coming up the river bank. She and the cubs lounged along the river bank for a while also. Video of the encounter can be viewed here. 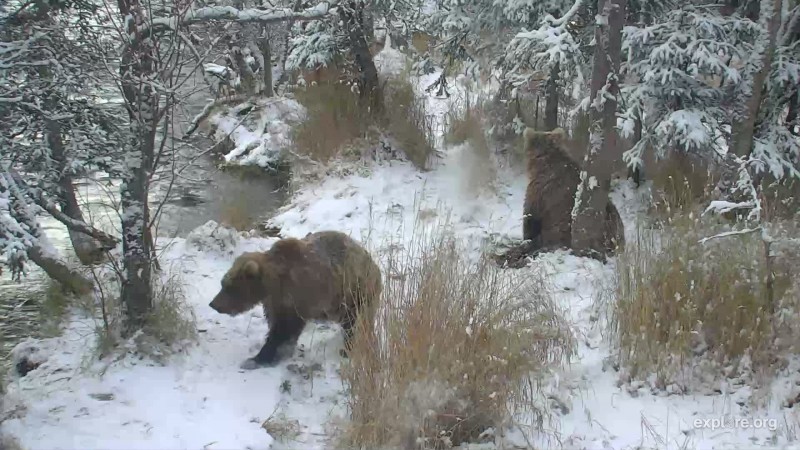 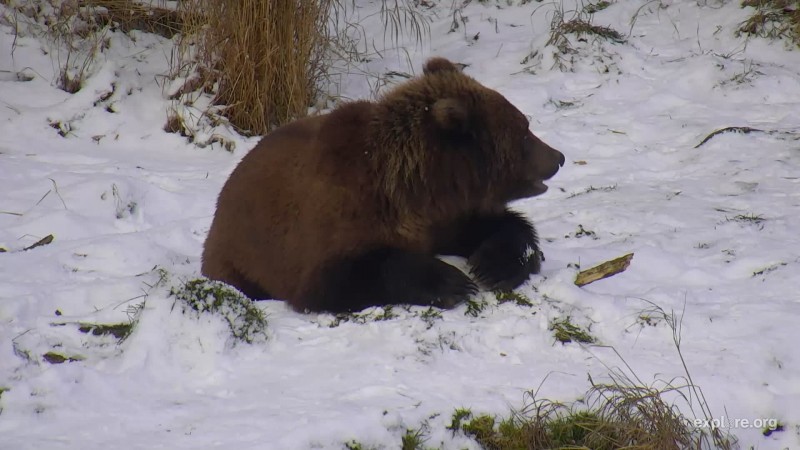 284’s cub along the bank in the riffles

708 Amelia and cubs did find something to eat later that same day in the riffles. Cam followed them up along the river bank and when it turned to follow them we see they had caught what we assume was a salmon and were eating it along the bank in the snow. We got to see how messy this process is with all the snow cover. Video can be viewed here. 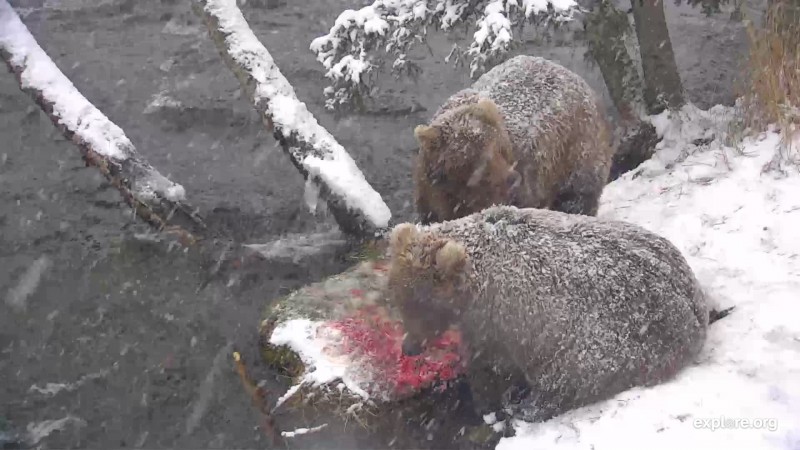 Bear 284 and her yearling cubs spent quite a bit of time on the same snowy day looking for and finding scraps to eat on the island. The cubs and 284 dug around in the snow to find bits of salmon to eat. Video can be seen here.

Bear 708 Amelia treated cam viewers with a close up of her while she was sitting on 89 Backpack’s rock. The cam op was able to zoom in giving us a close up view of her paws and claws.  Video can be seen here. A cam viewer asked Ranger Dave about bears being able to dig a den in the frozen ground, given we are seeing lots of snow on the mountains surrounding Brooks River. Ranger Dave responded:

“Although Katmai is located in an area with discontinuous permafrost, it seems that bears are strong enough to break through frozen soil to excavate a den. After watching them dig up unfrozen ground (it takes them minutes to dig holes that would take me hours with a shovel), I can only assume that digging in frozen soil is within their abilities.” 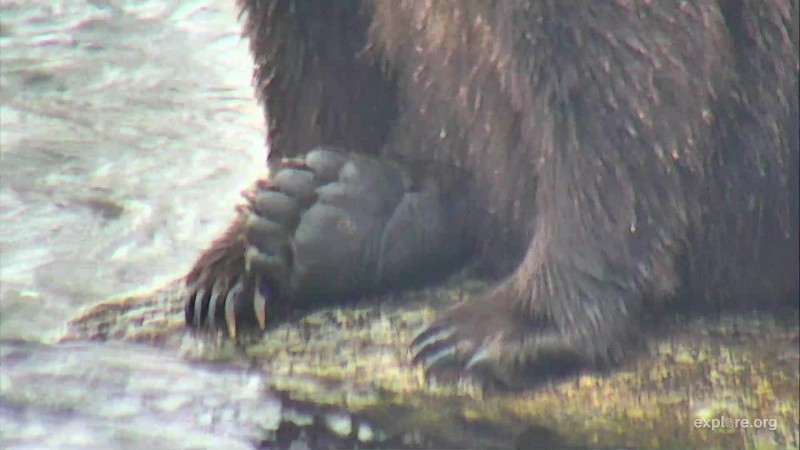 close up of 708 Amelia’s paws and claws 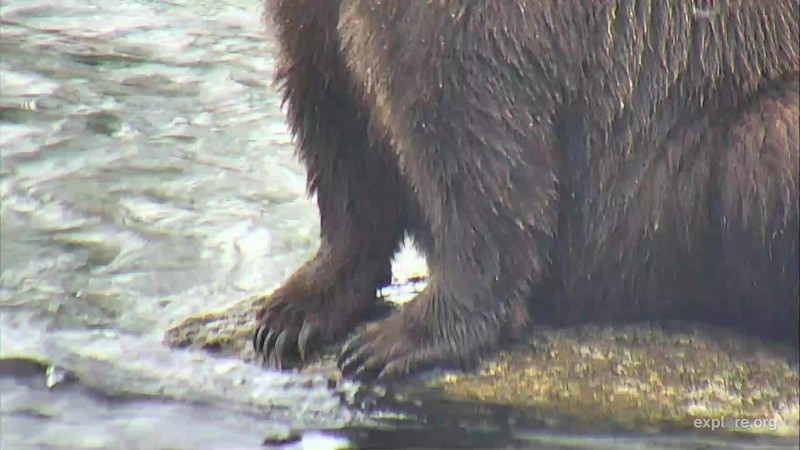 We’re starting to see fewer bears now as we near the end of October.  Former Katmai Ranger Mike Fitz made this post in comments that explains what is happening with the bears now:

“At this time of the year, bears are dispersing from the river as most salmon have finished spawning. Less food gives bears fewer reasons to remain. Some bears may continue to search for food elsewhere, but salmon runs all over the park are almost complete. Probably more than anything else, bears are moving toward their denning sites. So where do Brooks River’s bears go to hibernate? There’s a blog post for that.” 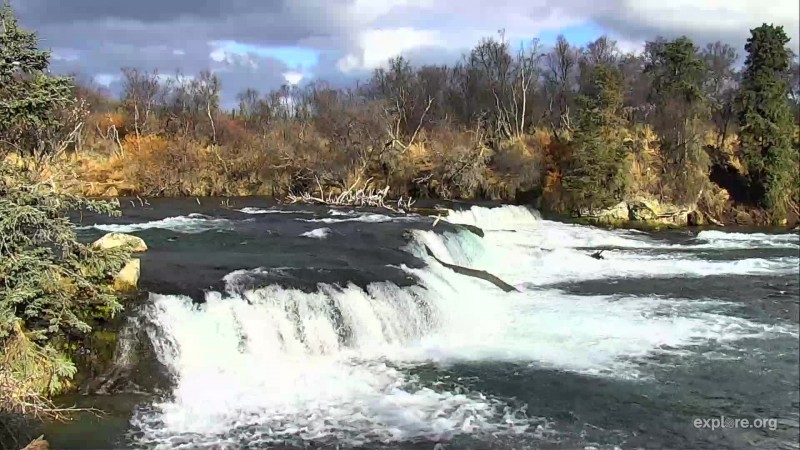 Some viewers wondered about the other frequently seen visitors along the river – the gulls.  We are also seeing less of them now.  Mike also told us where the gulls go during the winter:

“After salmon finish spawning and bears stop fishing for them, the gulls migrate either to the coasts of Bristol Bay, the Bering Sea, or the Pacific where they can find open water and continue to scavenge for food. Gulls don’t use Brooks River nearly as much without bears. They need bears to kill salmon so they can feed on the leftovers. Brooks River is a tough place for gulls to make a living otherwise.” 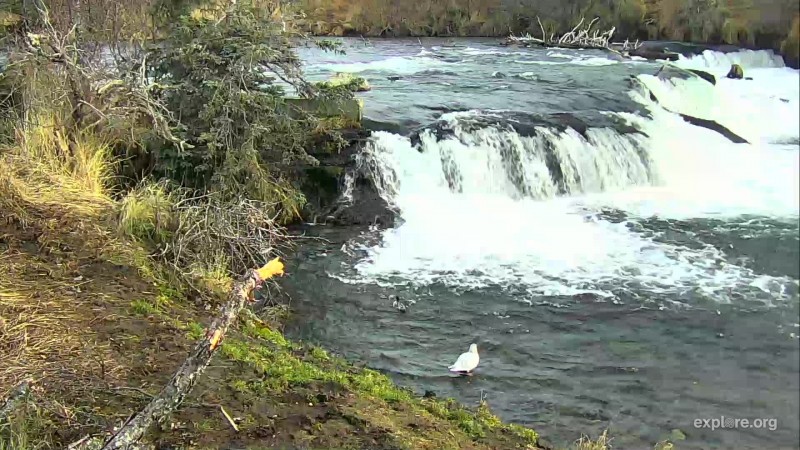 lone seagull at the falls

One bird species still seems to be doing great:  the Bald Eagle.  We are seeing them nearly every day now.  They have a favorite tree where they perch to watch the river.  We mentioned seeing them there in a previous blog noting that the Magpies harassed them while they were sitting there.  This week we were treated to watching one dive to the river from that tree and snag a fish!  The fish was too large for the eagle to fly with, so it half swam, half hop-flapped to the island with it. Once there, it was first joined by the Magpies again, looking to grab any available scraps.  Soon, a young Juvenile Bald Eagle came by looking to possibly score a meal by stealing. After attacking the adult unsuccessfully, the young eagle waited patiently until it saw a loose piece of fish.  It moved in and stole it.  The adult moved further away with its own piece of fish.  It looked like the story was over… Both eagles were eating with 8 or 10 Magpies on clean-up duty.  Suddenly a third eagle flew in.  This one a somewhat older sub adult.  It was able to also steal a piece of fish from the adult!  You can view it all here.

On Wednesday, we again saw an Eagle dive into the river near the riffles.  This one was some distance from shore and had to do quite a bit of swimming to get its large fish to shore.  Another adult joined in and they had quite a feast. 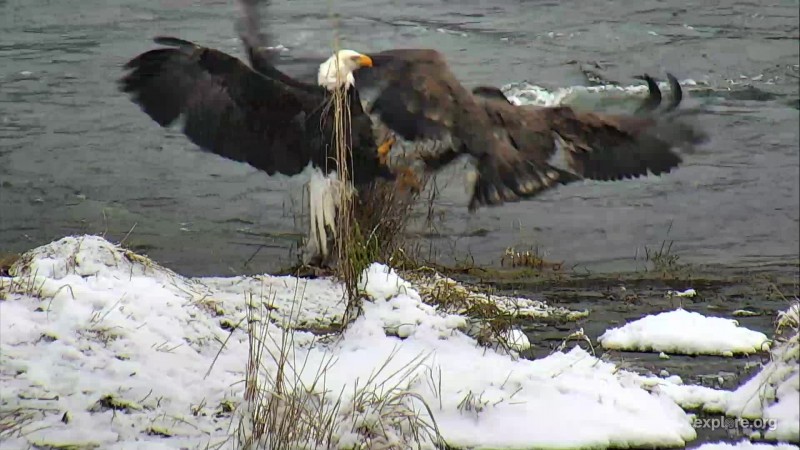 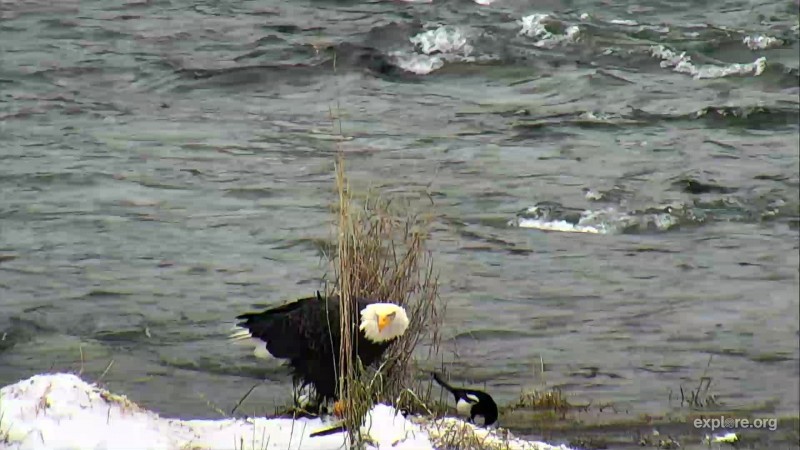 Earlier in the week bear 503 tried to climb the river bank to investigate another subadult that was on top of the bank. He couldn’t quite make it up the bank, maybe he didn’t realize how much weight he had put on this year ;). Video can be seen here. 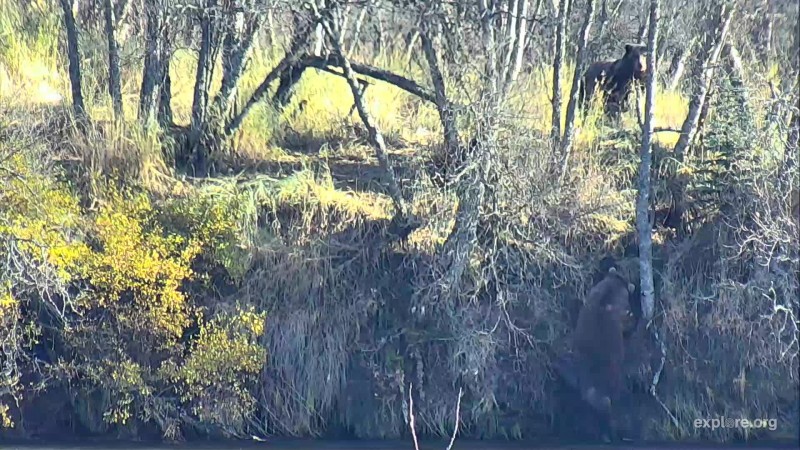 503 also met up with his little sister 719 at the falls this week. They were both spotted in the far pool and office area for a while before they each headed down toward the riffles. Its so great to see these two together :). Video can be seen here. 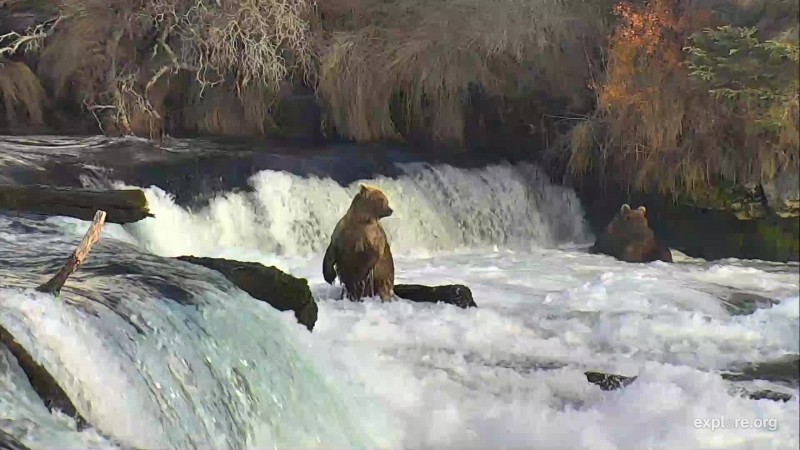 Cam viewers also saw a couple unknown bears up at the falls and riffles. The first seems to be an older male with a scar on his neck. The other is a light colored bears with blond ears, some thought the bear could be 274 but no one was sure. 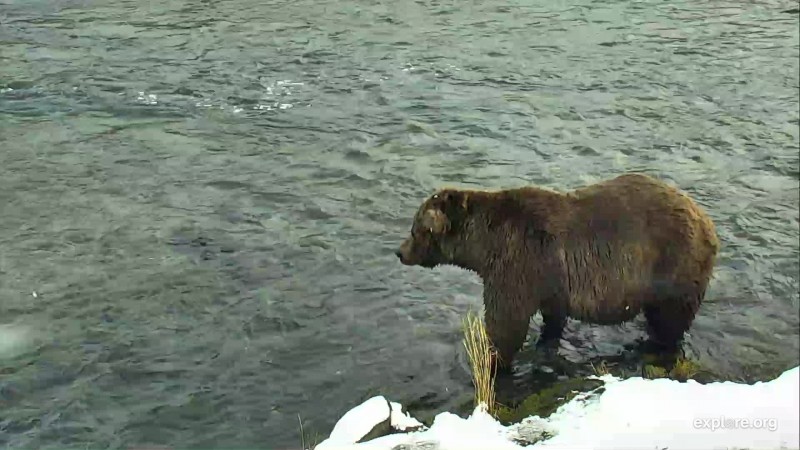 Unknown male bear at the falls