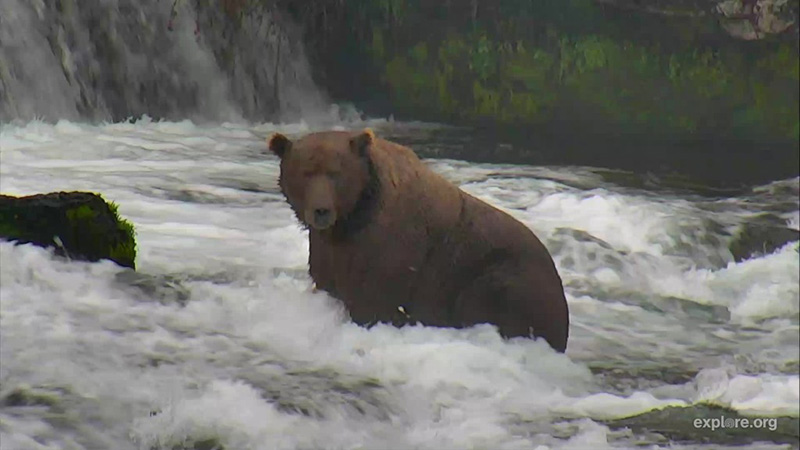 We continue to see a lot of playing or play/fighting from our August bears.  Often it is unidentified sub adults caught by the cams looking like they are enjoying the fun.  Of bears we can ID, we see adult bear 151 Walker and subadult 503 CubAdult playing often.  We also see subadult 719 playing with her adoptive brother 503 frequently.  And then there is the more unusual (to us) playing of adults 755 Scare D Bear and 32 Chunk.  This is made more unusual (to us) by the fact that 32 seemed to have assumed the role of most dominant bear this year – in the absence of other top bears – 856, 747 and 634 Popeye.  (More on 747 below)  Mike Fitz’s latest blog covers this behavior. 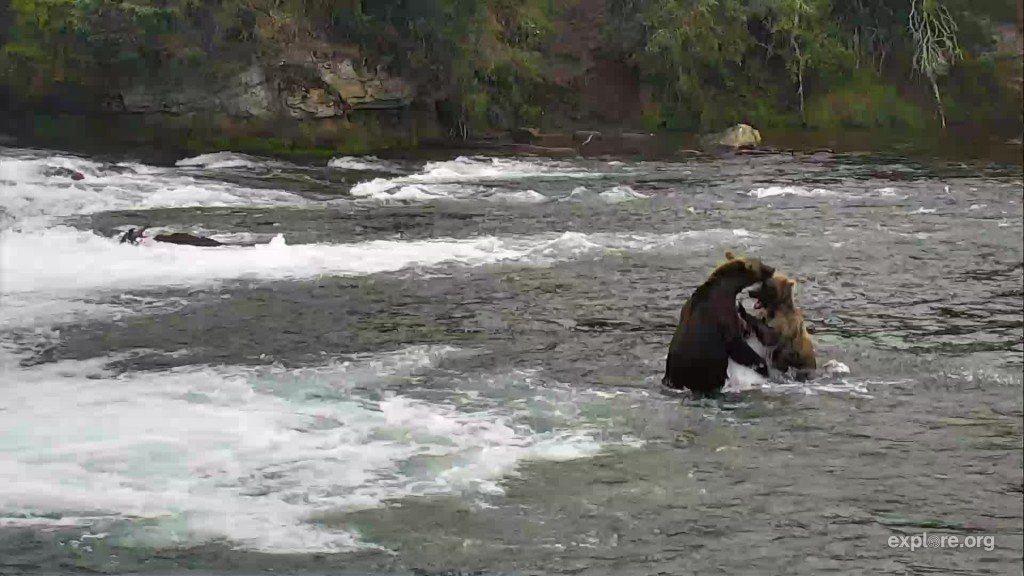 On the same subject, 503 CubAdult has also taken up another form of playing done all by himself.  He has been doing either water aerobics to stay in shape or he is practicing for the synchronized bear swim team! He performs daily in the Jacuzzi at the falls.  It’s unknown what the old guard of Jacuzzi fisher bears thinks about this unheard of behavior.  (We think he knows the Lower River cams are down and is trying to keep us entertained!!).

Meanwhile, 32 Chunk, has become so large that the falls can hardly support him!  Last Saturday when he stood for too long on the large rock outcropping, the rock wiggled under his massive weight. He certainly is packing on the pounds in preparation of this years fat bear contest! Also 755 Scare D Bear seems to be coming out of his shell on cam a little more this year.  Not only has he been interacting with 32 Chunk, but he also tried out the Jacuzzi for us. 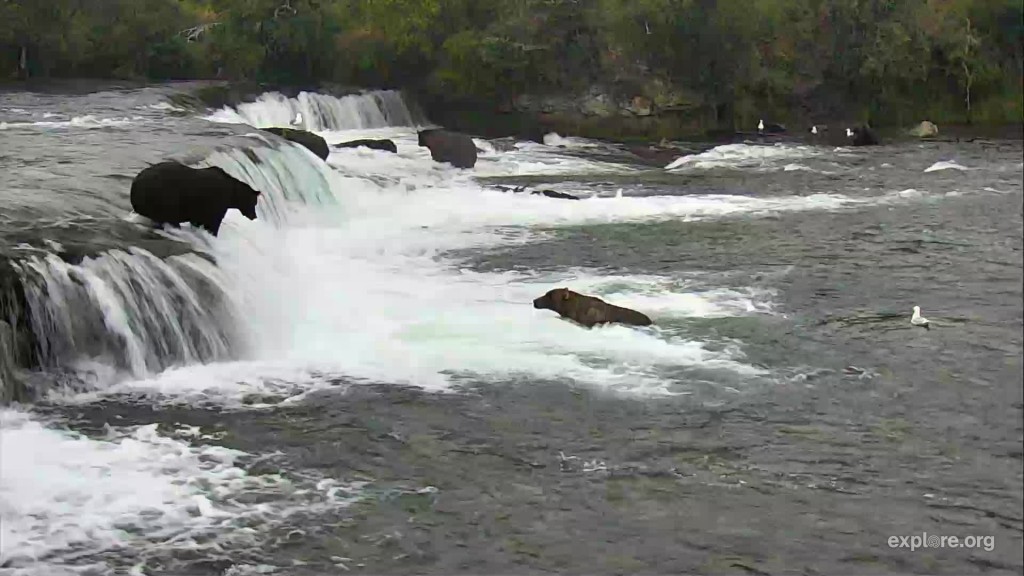 Bear #68 returned to the falls on Monday.  Like many males this time of year, he is huge!  He’s been fishing at the falls daily – mostly in the far pool area, but also tried out the J and other areas.  He’s fairly tolerant of other bears, but most younger bears, like 503 CubAdult and 151 Walker will yield to him for a spot he wants.  Subadult 719, however, seems to be pushing her luck by continually insisting on fishing very near him. She seems to even want to beg fish from him. A behavior we haven’t seen from other young subadults.  68 has expressed his displeasure of her being so close and physically taken repeated swipes at her in an attempt to back her off, this has occurred twice this week.  So far, she continues to return to the same spot near him in the far pool. 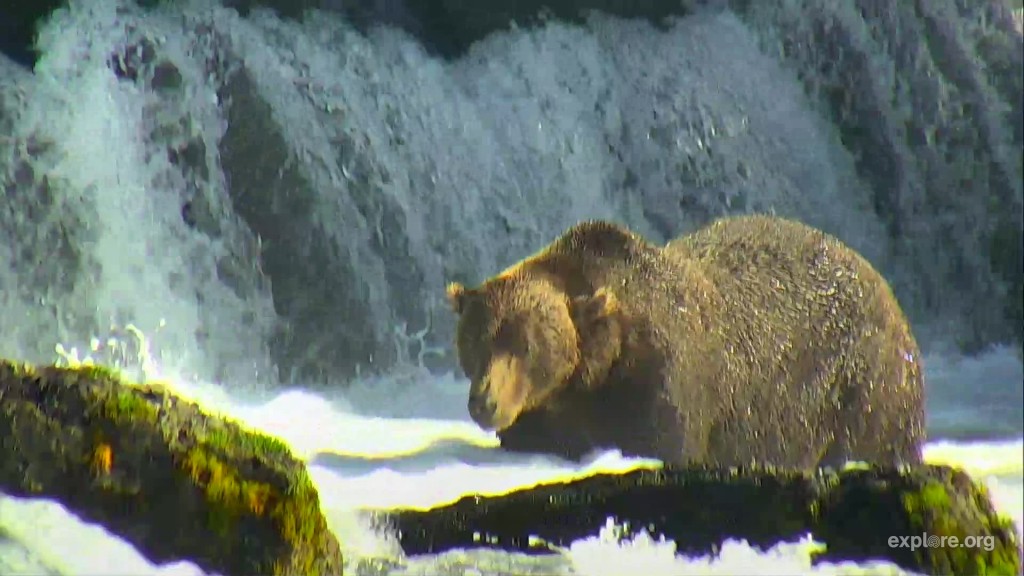 68 the day he returned to the falls

503 Cubadult has also been pushing his boundaries this week he was charged by 755 Scare D Bear and 151 Walker, and most surprisingly by his adopted sister 719. 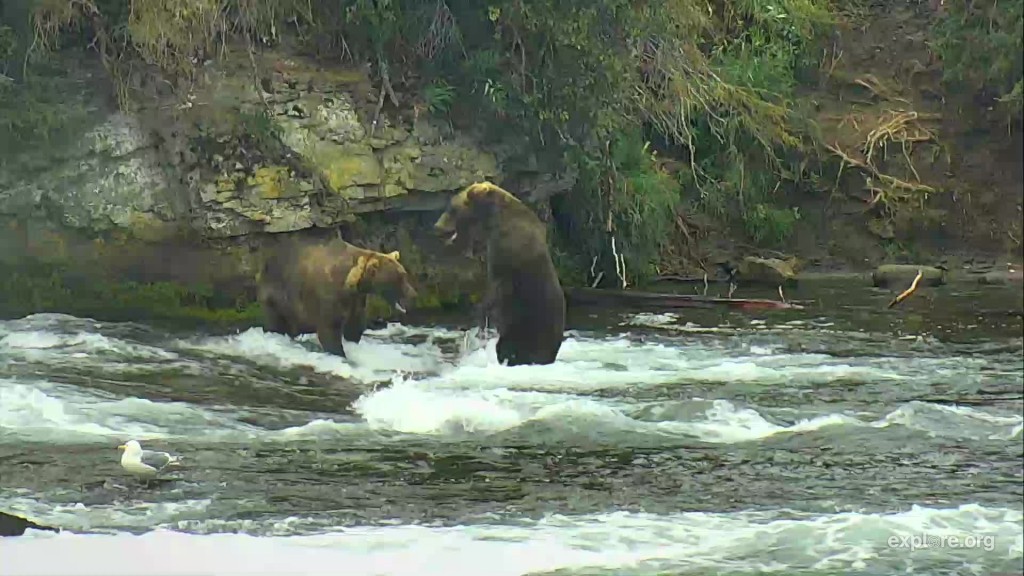 Two other family groups returned to Brooks River this week, most excitedly 128 Grazer and her three yearling cubs made two brief appearances at the falls. All three of the cubs appeared to be very chubby, wherever 128 took them for the month of August there seemed to be plenty to eat!  708 Amelia and her two 2.5 year old cubs have also been seen up at the falls twice this week, her cubs are almost as big as she is! 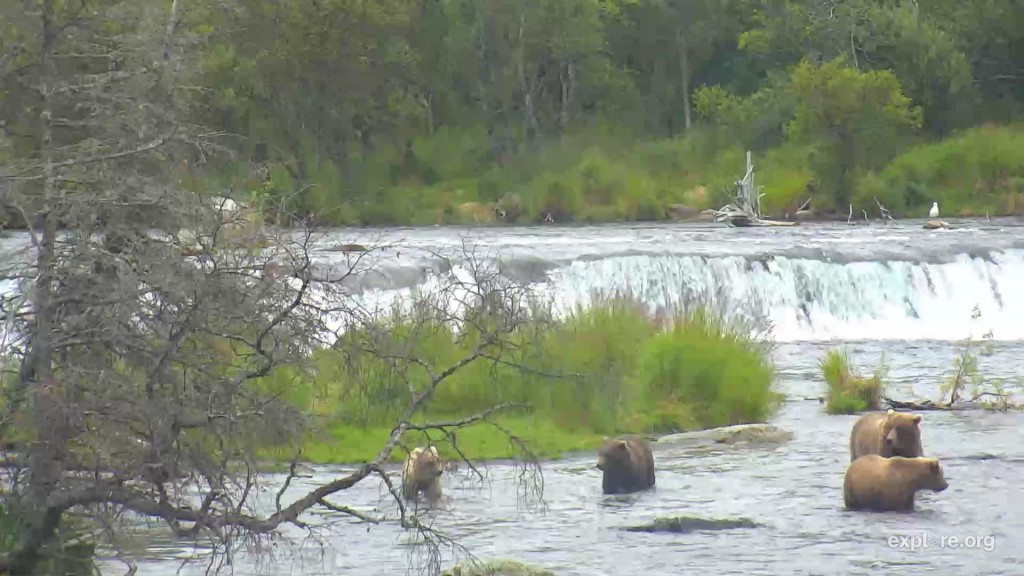 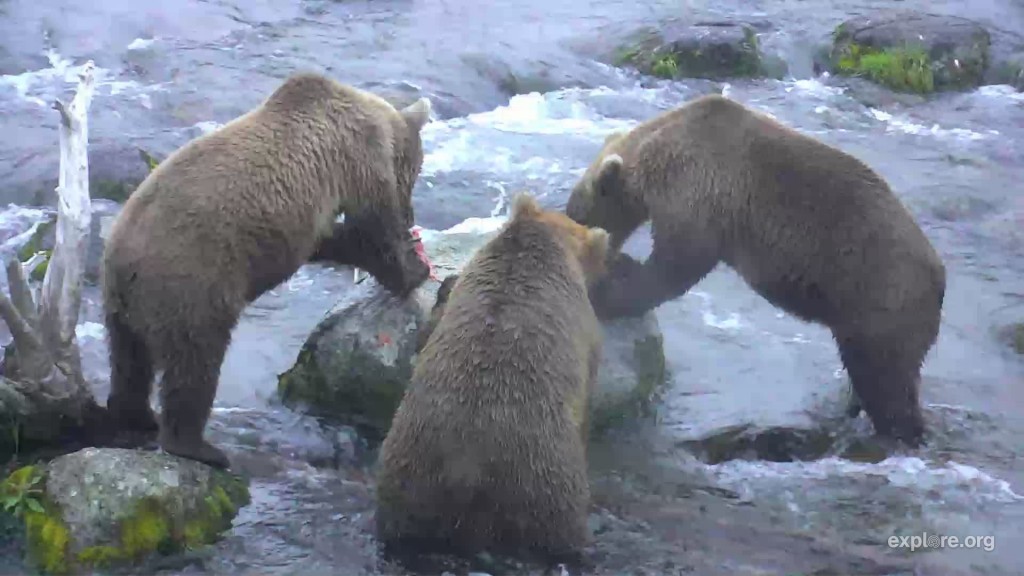 708 Amelia and cubs enjoying a meal

Saving the best for last, we’re thrilled to report that 747 has returned to the falls!!  He made a laborious descent down the path on the far side of the falls on Thursday!!  One look at him made it obvious that he found a prime spot for fishing in July!  He is huge….  Enormous…. Ginormous even!!  He continued to pack on the pounds fishing some of his favorite spots at the falls the Jacuzzi and the far pool. And he still seems to expect to be treated as a dominant bear.  He made that known. After fishing the J and the far pool for a long time, we watched him make an even more laborious departure going up the same path.  We have not seen 32 Chunk on cam at the same time as 747 as of this writing….  So stay tuned to see how that plays out!!  Today we have seen subadult 719, and 503 CubAdult fish very near him in the office area while he fished at the end of the log!  Amazing! 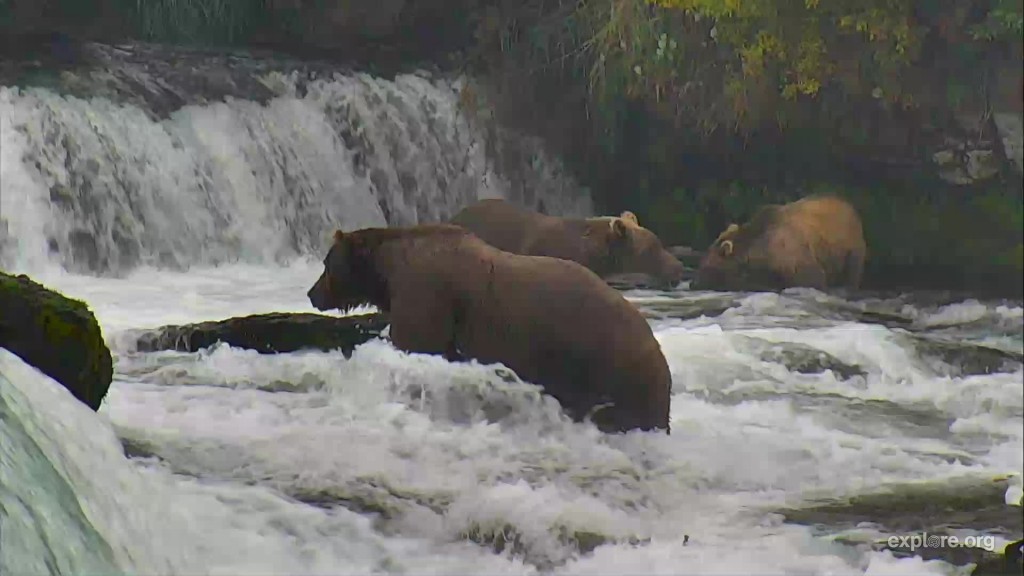 On August 21 we were treated to the most amazing, gorgeous and awe inspiring sunset over Brooks River, although we tune in for the bears this showed us the beauty of Alaska even with no bears in camera view. Another cute view on cam was a group of baby mergansers on Backpack rock. 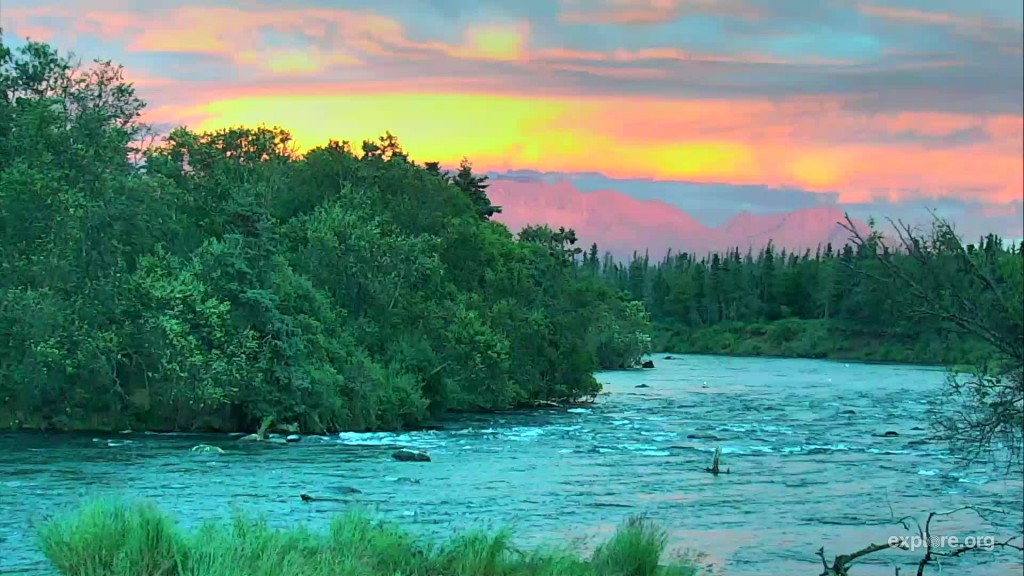 Sunset over the riffles 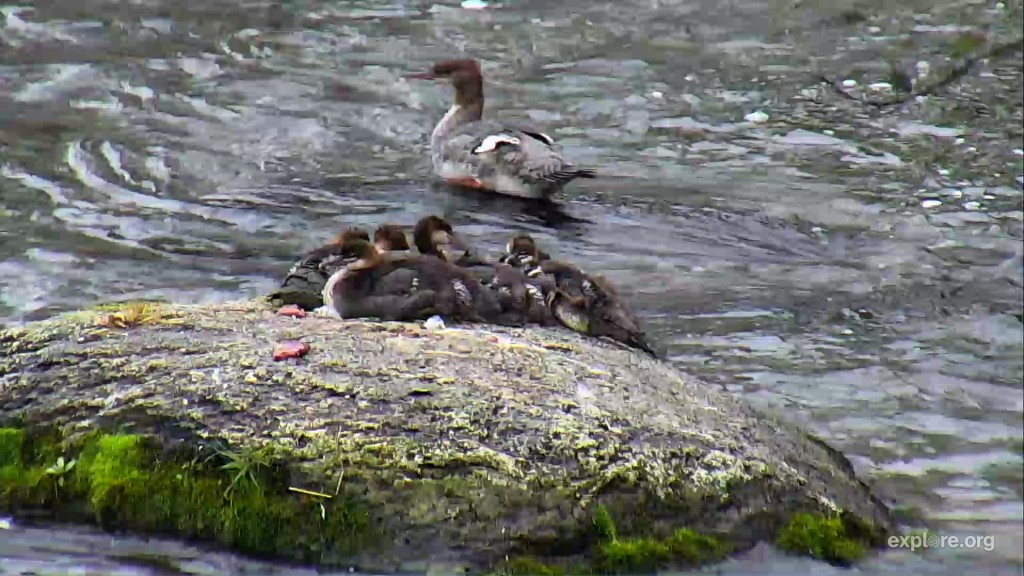