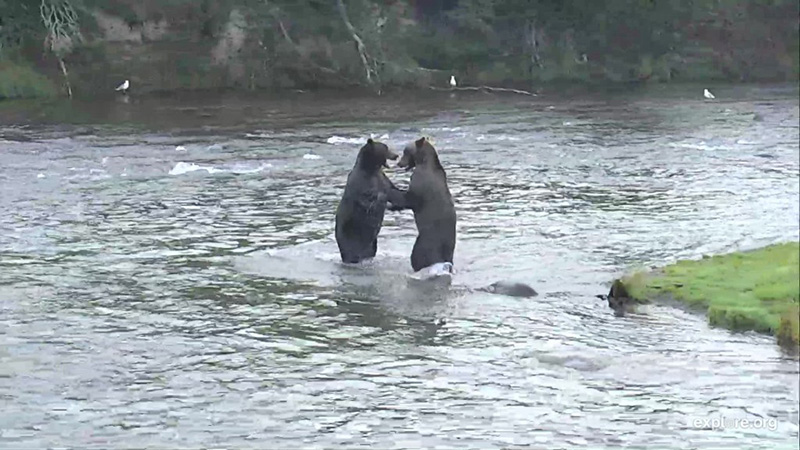 Hi and welcome to our new weekly Bear Cam blog. We will be publishing this blog every week with a review of the previous weeks Bear Cam highlights. Brought to you by your bear cam Mods, LaniH and GABear.

In previous years August at Brooks River meant no bears to be seen. This year we have been fortunate to have a few bears that visit the river daily. Three large adult males 151 Walker, 32 Chunk, and 755 Scare D Bear have been present at the falls everyday so far, this month. The abundance of salmon may have something to do with this. We have also seen quite a bit of play behavior at the falls and lower river. Not just from the subadults that you’d expect, but from the adult males as well. Most surprisingly was the play witnessed between 32 Chunk and 755 Scare D Bear (video courtesy of BrendaD). Bear cam viewers were amazed to see this given that 32 Chunk is thought to be the most dominant bear at the falls and, 755 Scare D Bear hasn’t ever been witnessed on cams playing like he was this week. You can read more about 32 Chunk as Brooks Rivers most dominant bear here in a blog post by Ranger Dave.

We saw the reunion of 503 and his adopted sister 719 at the falls this week. They were also seen at the falls playing on more than one occasion. Cam viewers enjoyed seeing them play together again. It brought up memories of seeing them play as cubs. We also saw play between other males as well; 151 played with 503, and 503 also played with 755 Scare D Bear. The lower river was the subadults playground, they play on the spit, spit road, closed trail and the path to camp. One marathon play session lasted over half an hour. There is an interesting study that was done on play behavior and juvenile survival in 2009 by Fagen and Fagen. 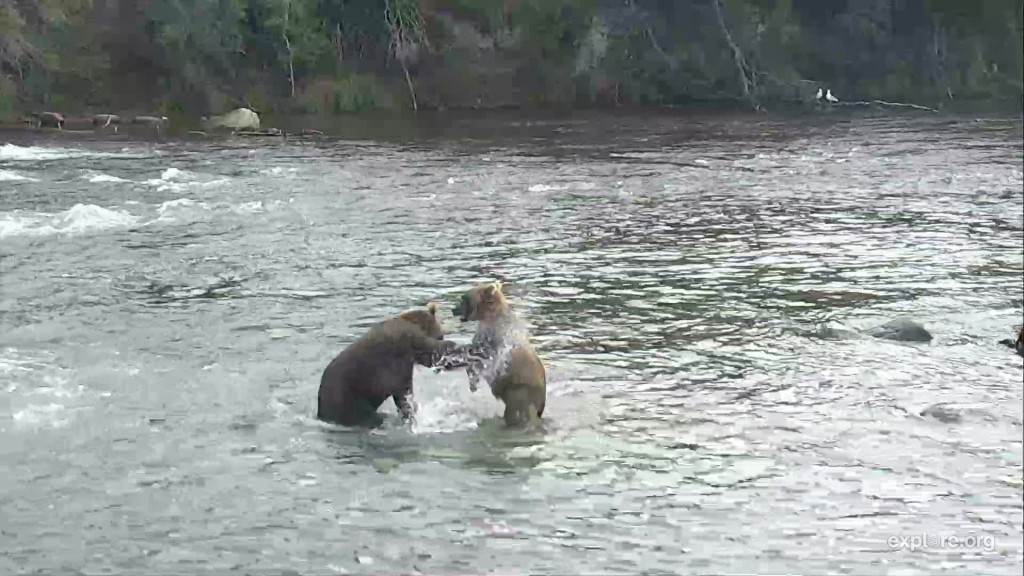 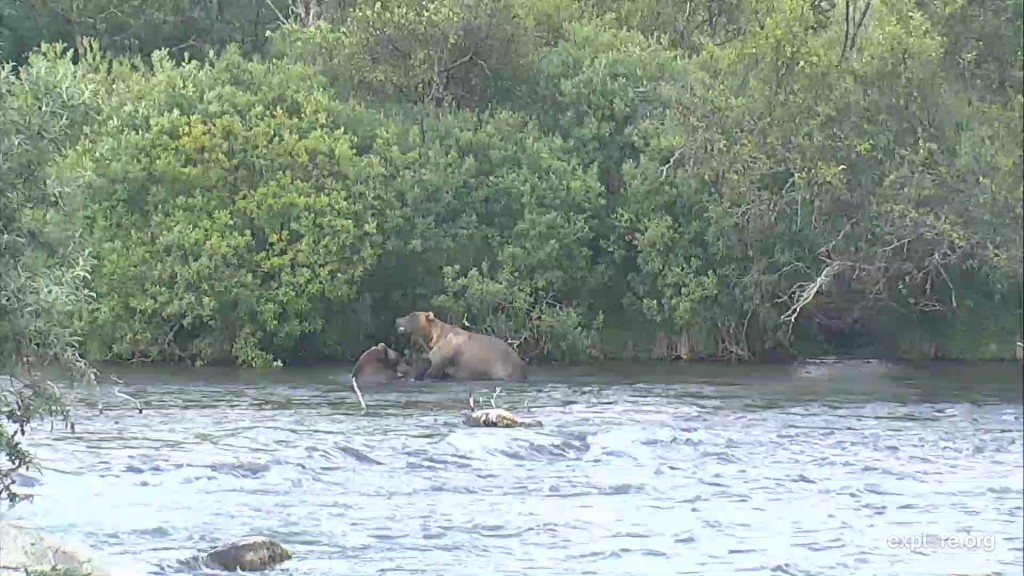 There were only two sows with cubs spotted at Brooks river this week. 854 Divot and cubs made an appearance on the lower river and 284 and cubs were seen at the falls and lower river. 503 had a run-in at the falls with 284, he seemed to not know she was in the woods, when he walked over and turned his back she exploded out of the woods and chased him under the platform. (video courtesy of MelissaOR).

We saw lots of begging behavior this week also, which can be a useful way of getting salmon. 32 Chunk begged from 755 Scare D Bear by either trying to climb the falls to get the salmon or sitting next to 755 Scare D Bear and hoping to have him drop the fish or get the scraps. 151 Walker also begged from 503 as did 719, who sat in the Jacuzzi hoping to get scraps from 503 or have him drop the fish so she could get it, which actually happened more than once. Read more about the different fishing styles Brooks Bears utilize here. 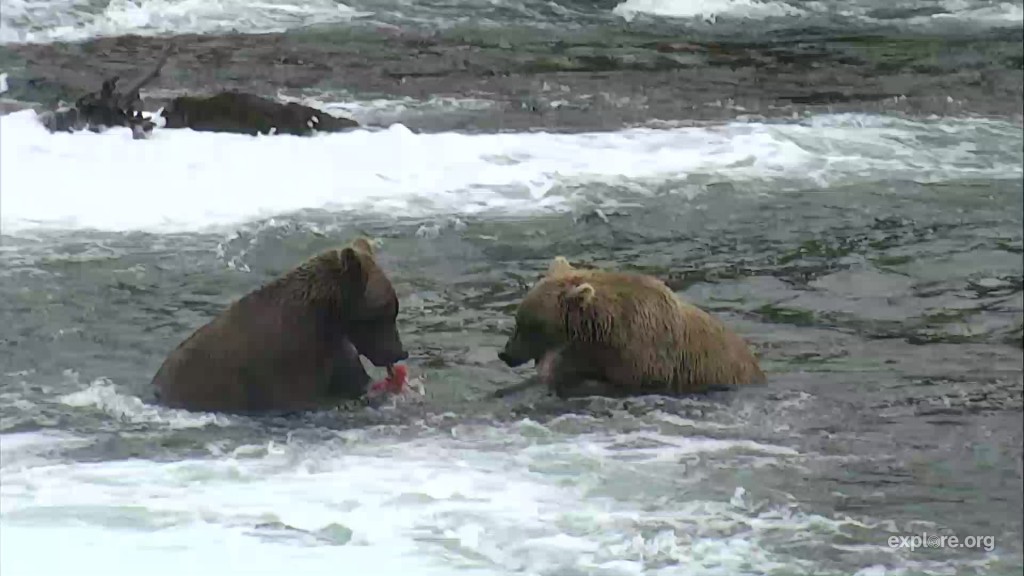 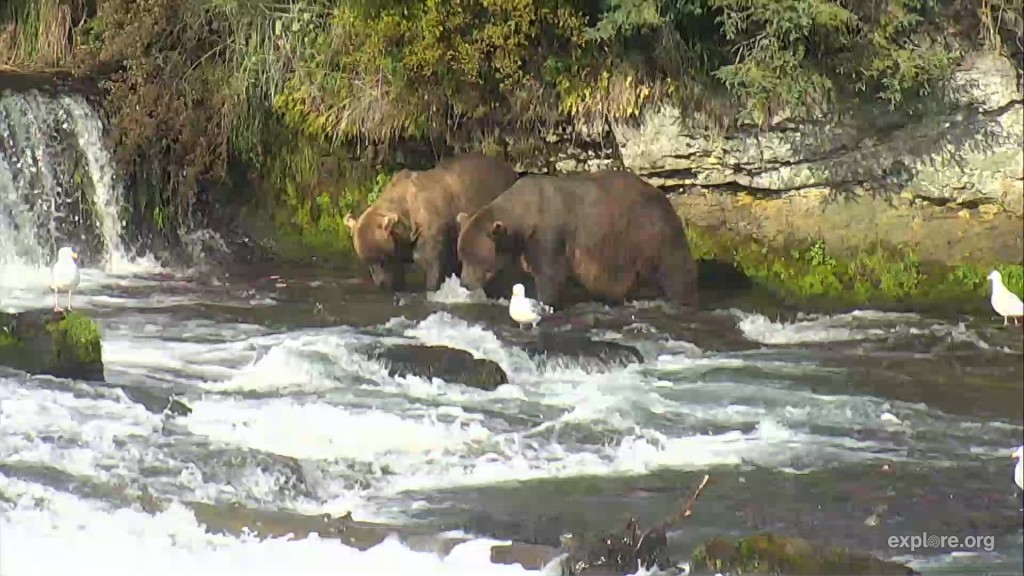 While many of the bears are away…consider for a moment what brings them here year after year. We are still seeing fish jumping at Brooks Falls, but in large part the seasonal sockeye salmon run is nearly over. This year was a record breaking run according to Katmai NP.  59 million sockeye salmon entered Bristol Bay.  It was one of the 5 largest counts since records have been kept. Up to 400,000 of these salmon may have headed up the Brooks River. The bears have feasted on the vibrant salmon during July and part of August.  Many bears have moved on with the salmon, upstream where they can continue to feed. More information on the salmon jumping the falls: Mike Fitz Blog Keep Jumping Salmon, you can do it. Katmai National Park Facebook video of a salmons journey in the Brooks River.

This week, we’ve had some great views on the cams of bright red Sockeye Salmon in Brooks River. The salmon we’re seeing were born in this area, lived in a nearby lake as they matured and then ventured out to sea where they lived their adult lives for 2-3 years.  Then, somehow, they manage to return.  Making an arduous journey from the sea back to the exact place they were born.  The ones we see now in the river have beaten the odds so far – surviving commercial fishing, anglers, predators and a lack of nourishment since they left the sea.  They do not eat again after leaving salt water.  They are dying, absorbing their scales and showing the red color of their flesh.  They may be wounded and grow whitish fungal patches around their wounds. Two blogs about sockeye salmon can be found here and here.

With the last of their energy resources, the females produce thousands of eggs, the males fight each other for access to the females.  The females fight to defend their nests. The females use their tails to sweep out a place for their eggs. Sometimes several places.  When it’s all over,  they will die.  Once again the bears, along with gulls, eagles, magpies, wolves, and other fish will feast on the lethargic, dying salmon.  As they do so, they carry the salmon nutrients far from the river, into the woods, where those nutrients will become fertilizer for plants and trees.  Without Sockeye Salmon being keystone species here, the ecosystem around Brooks River and Katmai NP would not be the same.  There’s so much more to their story than my brief attempt to salute them.  Bears of Brooks River 2017 e-book, pages 15 and 16, downloadable here. 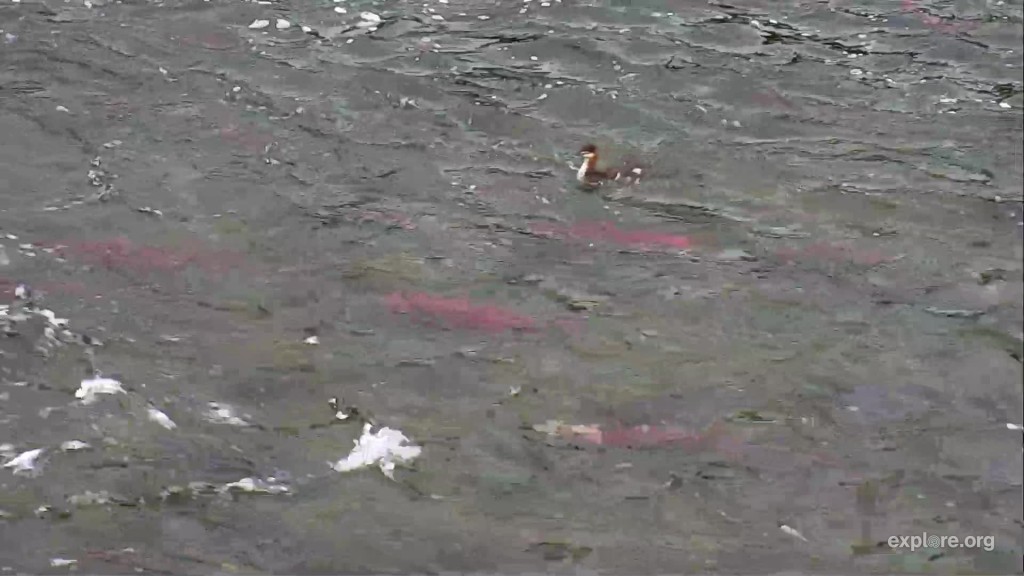 red spawning salmon are seen below the falls, as a merganser swims above 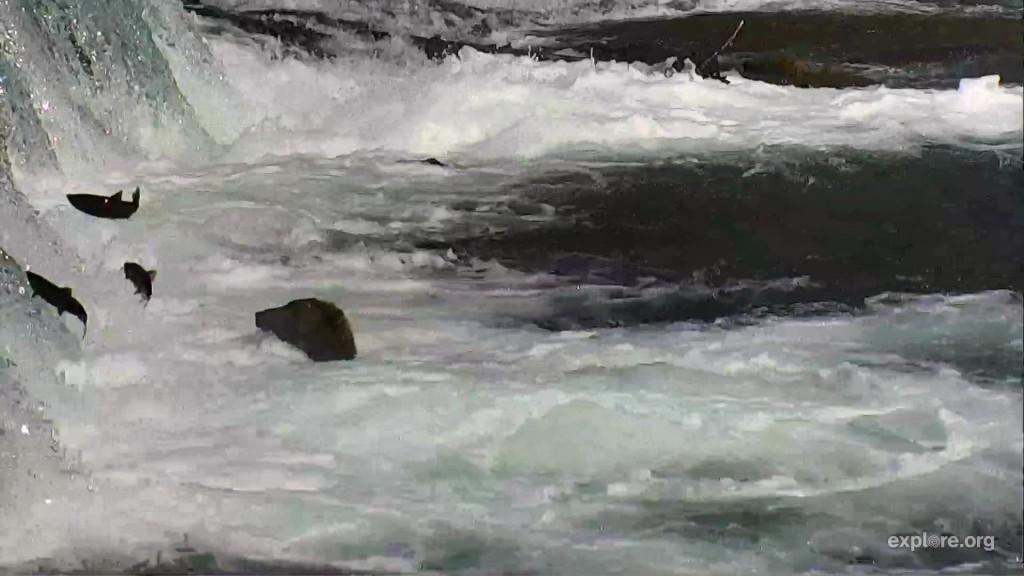