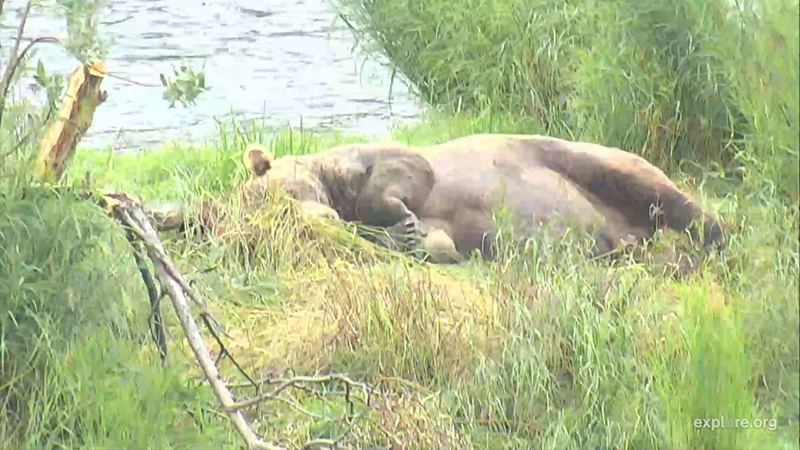 480 Otis sleeping on the island

Hi and welcome to our new weekly Bear Cam blog. We will be publishing this blog every week with a review of the previous weeks Bear Cam highlights. Brought to you by your bear cam Mods, LaniH and GABear.

This week viewers were bewildered by the interactions between 32 Chunk and 755 Scare D Bear. It all started on August 5th with 32 Chunk following 755 Scare D bear up the falls in the far pool and begging for fish. 32 Chunk is thought to be one of the most dominant bears on Brooks River since 856 returned this year seeming to be injured – a blog by former Katmai Ranger Mike Fitz covers the end of 856’s reign as most dominant bear. According to the bear book 32 Chunk has begged fish from other bears in the past, so this behavior is not new to him. However it is a departure from the “normal” behavior other dominant males display. Over the next few days he exhibited the same behavior, following and begging 755 on multiple occasions: 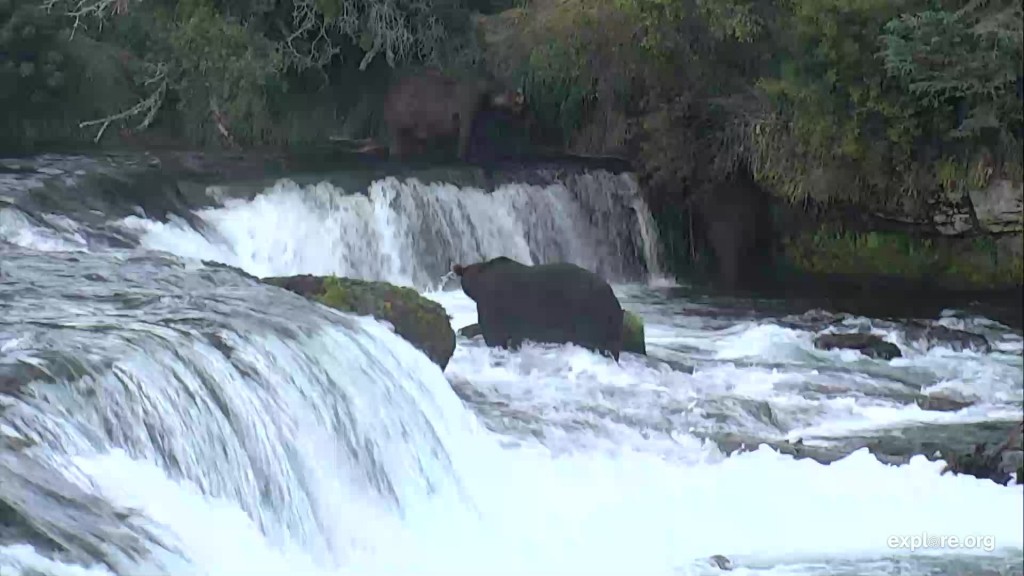 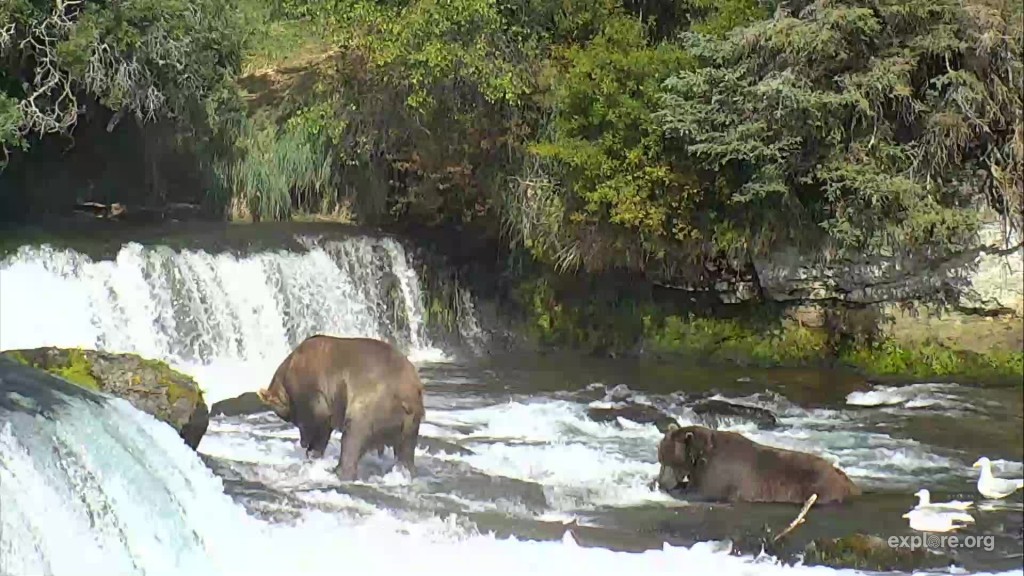 We’ve seen a lot of different behaviors at the falls this season, perhaps teaching us that we will never really understand or be able to predict bear behavior.  32 Chunk came in like a lion – asserting his seemingly newfound dominance often and to both formerly dominant bears and also less dominant bears. Now, though, he seems torn between still trying to appear dominant and wanting to play or hang around with another bear. 755 Scare D Bear has never shown us much of a playful side either, but we are seeing it now. I remember some years ago seeing some similar type behavior between 32 Chunk and 89 Backpack. They followed each other around and engaged in many bouts of play fighting. But then, it was 89 Backpack who would perch on a rock at the falls and watch 32 Chunk catch fish – now Chunk is doing the watching and following….  What are your thoughts about this unlikely friendship that has developed between these two bears?

Sub Adult 503 Cubadult has never met a bear he didn’t want to befriend. This week he chose an unknown sub adult partner and after quite a bit of warm up exercising, performed a lovely dance for us. 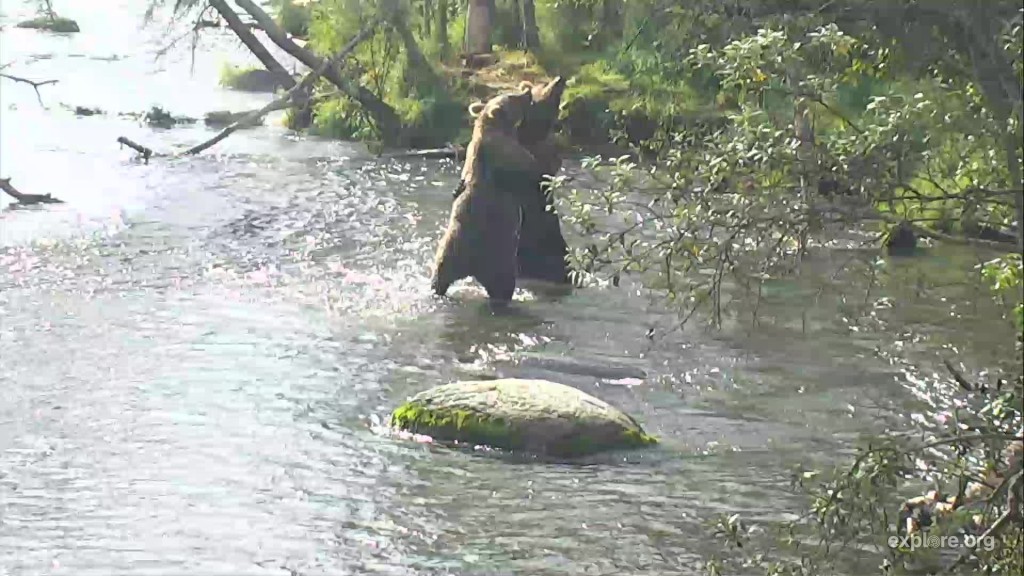 503 Cubadult  also discovered he didn’t need another bear in order to have fun!  A dropped shirt found in the river gave us another round of entertainment.

To know why 503 Cubadult has become one of the most beloved bears on Brooks River, you need to know his special history. From being abandoned by his biological mother 402 – more on this here and here –  to the unlikely occurring, him being adopted by 435 Holly – more here and here. When 435 Holly returned in 2016 she emancipated her two cubs, 503 Cubadult and his adopted sister 719 were on their own. Both were seen using the river last year and again this year, 503 Cubadult despite all odds being against him has not only survived but thrived.

Bear 402 was seen on 8/5 doing her signature submarine dive in the Jacuzzi!  402 is one of the few bears who will dive completely under the water in an effort to catch fish.  Many bears don’t care to get their ears that wet.  402 did this after displacing her biological son, 503, from the Jacuzzi.  503 Cubadult watched.  Wonder if 503 Cubadult will ever exhibit this method of fishing?

This week we learned that bears can sleep for a very long time.  480 Otis must have heard us wondering where he was and what he was doing during the long hours he was away from the falls.  Beginning the evening of 8/8 and going through a good bit of the day on 8/9, he showed us.  He picked a spot in full view of the cam on the island near the falls and took a nap… well more like a Rip Van Winkle sleep.  Dedicated fans watched him sleep, stretch, yawn, roll over, sleep some more, get up, lie back down…. And sleep some more for about 14 hours!

On 8/4, we watched a new cub sporting event.  284 and her cubs were fishing around the falls island area.  One of the cubs stole a fish from 284, but then dropped it.  The fish headed back toward the falls.  The cub then demonstrated the “snorkel run”.  He quickly stuck his head in the water to watch the fish and then, still with his head in the water, sprinted after it, trying to recapture it.  He wasn’t successful, but he sure showed great form!

The river has occasionally looked like Subs Gone Wild with all the sub adults running around sometimes in bands of 3-6 at a time.  We’ve enjoyed watching them chase and charge each other, play fight, and fish together.  We don’t always know who they are – some have numbers already and some are newly on their own this year and do not yet have numbers – but we have fun trying to guess. 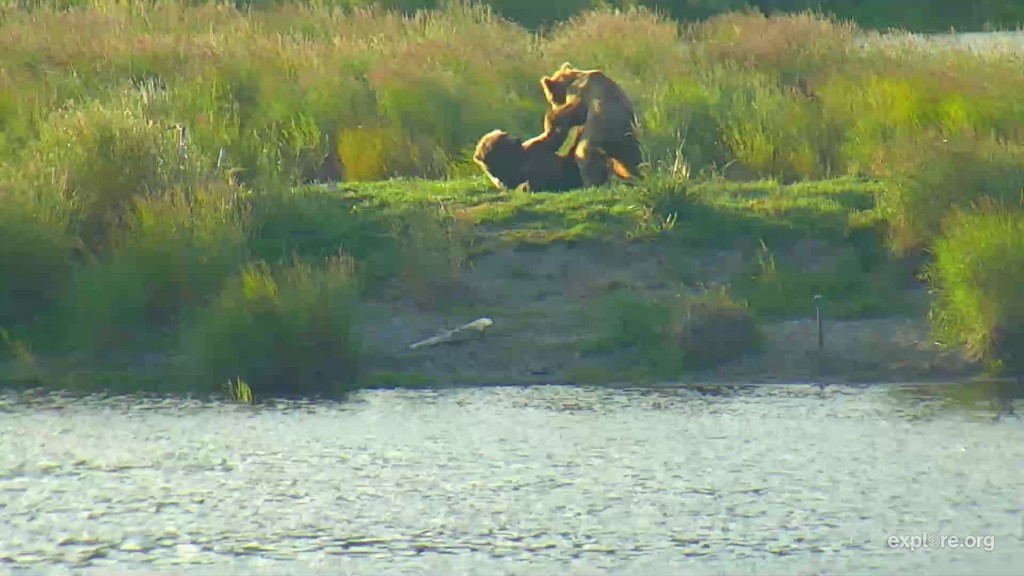 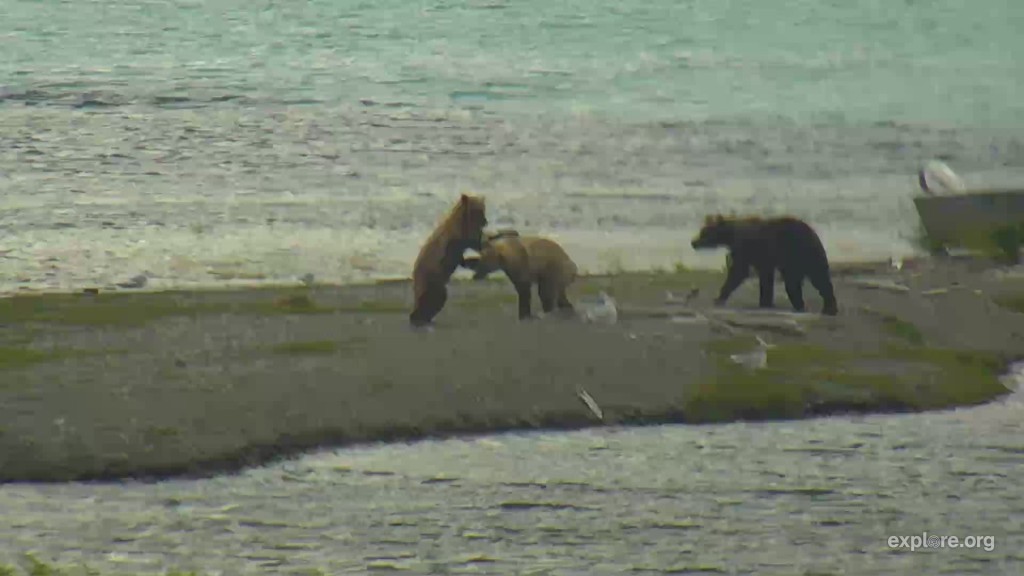 Three subadults play out on the spit 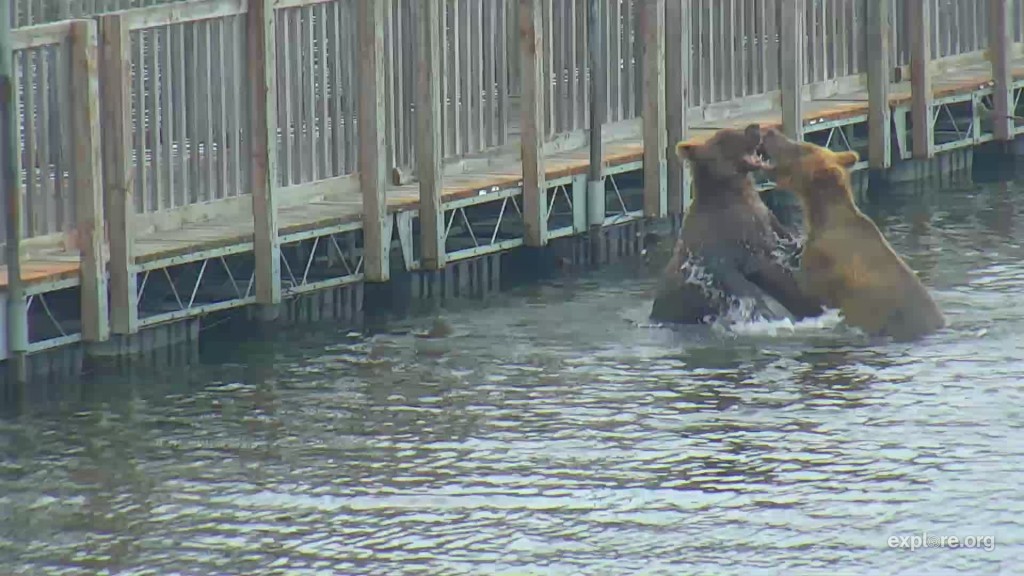 Two subadults wrestle in the water near the floating bridge

This week also saw the return of some beautiful sunrises on the lower river. 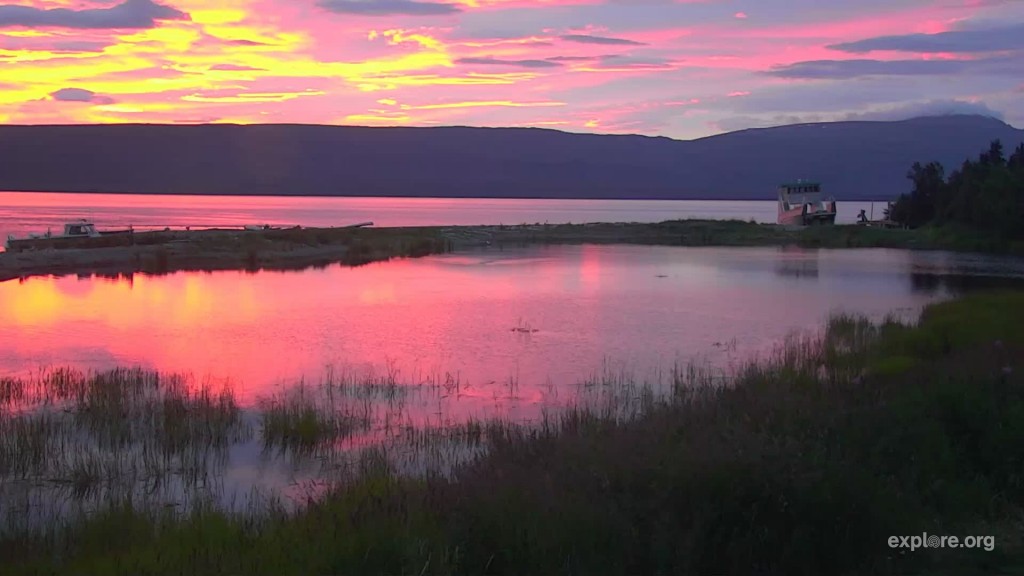 We had a live chat with Rangers Clint and Leslie about bear monitoring.

We also had a Play by Play with Ranger Dave.

What will next week bring… only the bears know 😉