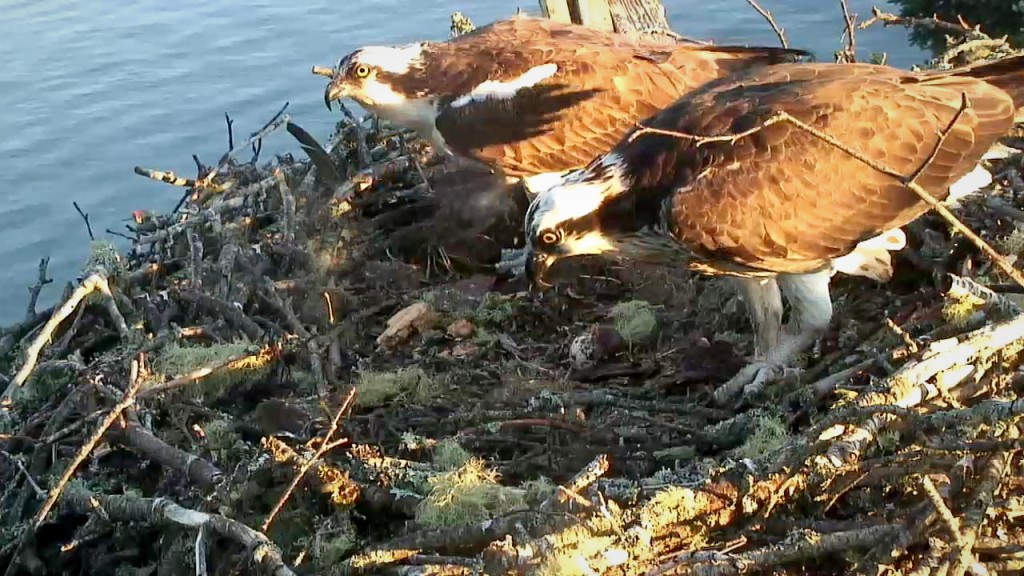 Steve and Rachel remain alone on their nest

The Hog Island Osprey Nest and its viewers were shocked on Friday when an eagle took both young osprey chicks from their nest in the afternoon hours. Project Puffin Director Dr. Steve Kress provides his insight and gives context on why the eagle attack may have occurred, including a first hand account from staff on Hog Island.

“I share the loss of our little osprey chicks ‘Big’ and ‘Little’ who vanished today so suddenly. I too will miss watching the daily drama at the nest unfold. But now we must look for new lessons in this. What will Rachel and Steve do? Will they continue to frequent the nest and guard it from intruders? Will they take this opportunity to do some remodeling by building up new layers of nesting material in anticipation of next year? My hunch is that they will not lay eggs- there would not be time before the powerful urge to migrate lifts them into the wind.  I long ago learned that watching birds is endlessly surprising and with the tool of the cam, we all have the opportunity to learn together.

We do know for sure that it was an eagle that took the chicks. And we have an eyewitness account. The Hog Island chef had just stretched out in a nearby hammock to take a well-deserved rest when she heard the ospreys calling loudly- then heard a loud ‘whoomphing noise.’ She turned to see the eagle flying low to the ground and suspects the eagle was hit by one of the ospreys-and this drove it to the ground. ‘The eagle looked as though it hit the ground and had trouble gaining altitude, but barreled off through the trees, right by my hammock.’

This is the first time that an eagle has snatched nestlings from Rachel and Steve, though eagles and Great Horned Owls have threatened the nest before. Much of the ospreys’ success up to today is because their  nest is located in the center of the Hog Island Audubon Camp.  When it is in session, the camp provides protection as there are usually bird watchers frequenting the vicinity. Rachel and Steve have grown accustomed to this activity which usually deters wary eagles. However, the 50 participants in this week’s program ‘Hands on Bird Science’ departed this morning, which may have given the eagle an opportunity to attack. A pair of eagles also nest on Hog Island in a nearby giant white pine and they have at least one chick to feed. But today’s attacker could have just as easily been a random bird taking advantage of an opportunity. Maine’s coastal Bald Eagles often feed on other birds, though these are usually gulls and sea ducks such as eider. And eagle populations are on the increase- an indication of less pollution from pesticides such as DDT. The most recent Maine statewide eagle census found more than 700 pairs–a dramatic increase from only a few pairs in the 1960’s.

It’s natural to look for meaning and lessons in such a loss- and though it’s tough to witness, I reflect that some birds will live as others pass. And this is very much the case with eagles. Each bird is just trying to stay alive and rear its young. Today’s drama reminds us how beautifully adapted each animal is to its habitat and home. This cam has given us a remarkable window to see nature as few have seen it before.”

Thank you for your words, Steve. Explore has cut a short video of the attacks, which we sent to osprey experts for review, and we must warn you the footage could be disturbing for some viewers. The video is below: