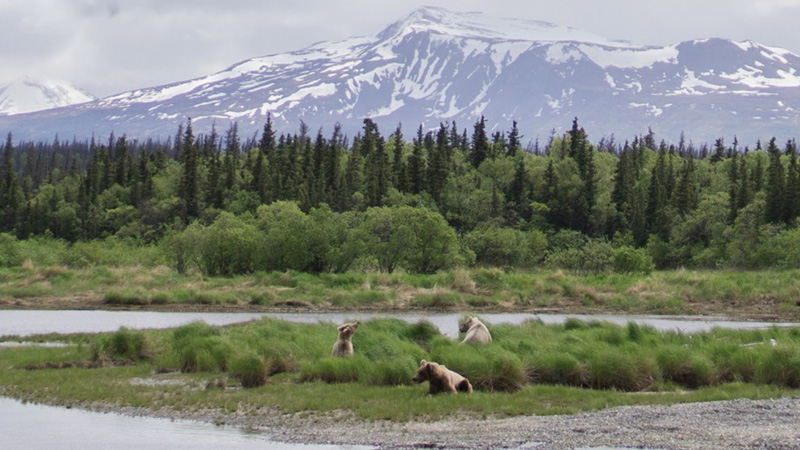 Holly and her cubs | photo by Anela Ramos

Another summer with Holly and her cubs?

Last week, Brooks River’s most famous bear family—435 Holly, her biological (now 2.5 year-old) female cub, and her adopted (now 3.5 year-old) male cub—were seen for a brief time at Brooks River. Last fall, the future of this family was a target for much speculation. Would 435 keep her cubs for another year? Or, is it time for them to go their separate ways? It may be too early to answer those questions definitively.

Katmai’s mother bears usually keep their cubs for two to three summers before separating from them. The cubs’ emancipation happens in spring after the bears emerge from their dens and is not voluntary. Hormonal changes, likely related to the return of the mother bear’s estrus cycle, cause her to become increasingly intolerant of her offspring. While I’ve never seen this separation occur, it’s been described as somewhat sudden and aggressive. The cubs may not know what’s coming. “It must be a traumatic experience for the juvenile bears to be evicted by a mother who has fed and protected them all their lives,” mused Will Troyer, one of the first biologists to study Katmai’s bears. This is an event every bear must endure as it matures.

But, late May is here and Holly still has her cubs. Does this mean the cubs will be spared from separation until next spring? Some evidence suggests they still may go their separate ways.

In early May 2008, 408 CC returned to Brooks River with her three 3.5 year-old offspring. We watched them play near Brooks Lodge before they disappeared into the forest. When 408 came back that July, she was single. She drove away her cubs sometime between those two events.

Bears at Brooks River usually don’t vary in the amount of time they keep their offspring. If they wean them at 2.5 years, for example, then they are likely to wean subsequent litters at that age as well. 435 Holly weaned her only known surviving offspring, 89 Backpack, when he was a 2.5 year-old.

We know that bears separate from their offspring at this time of the year, and Holly’s biological cub from her current litter is 2.5 years old, the same age as 89 Backpack when he was weaned. However, it would be a mistake to use these anecdotes as absolute predictors for this bear family in 2016. So much of this family’s history is atypical.

The stress of separation might be great for newly weaned cubs, but a mother doesn’t do it out of malice. Nor does she “choose” to keep her cubs to be nice. The mother’s biology will dictate the family’s separation or continued unity.