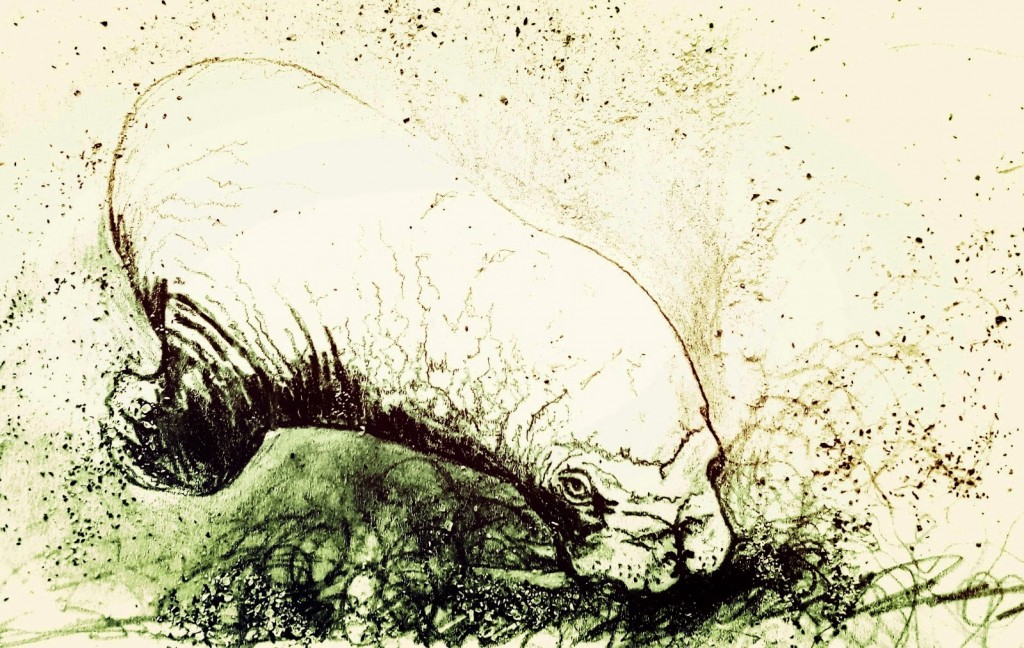 What Makes a Walrus a “Keystone” Species?

The term “keystone species” describes a species whose role in its ecosystem is significant because it essentially shapes the habitat that the whole biotic community it lives in depends on. The classic example of a keystone species is of course the North American beaver, whose dam building is the architecture and infrastructure that helps create and maintain the healthy wetlands and water tables that all the other species in their ecosystem depend on. Another example of a keystone species in the North Pacific are the five species of salmon. Each year millions of salmon rush up rivers into rainforests, high mountains and tundra to spawn and die, depositing uncountable tons of essential nutrients collected in the deep ocean into riverine habitats, supporting wetlands, taiga and forests alike. Other examples of keystone species are sea otters in kelp forests, prairie dogs in the plains, mangroves in the tropics or elephants in the savannah. The nature of ecosystems is that ALL species play important roles and we often do not know what the full extent of those roles are until we have nearly wiped a species out and the ensuing trophic cascade* gets our attention.

What does this have to do with Pacific Walruses on Round Island? Although it may not seem immediately obvious why, walruses are considered keystone species in the arctic portions of their range and may hold and equally important role in their habitat here in Bristol Bay. Walruses are “benthic foragers”, meaning that they eat mostly marine invertebrates found on the seafloor. Walruses make their living on the shallow ledges of the continental shelf by spending long hours diving, sifting through and churning up the soft layers of silt and sediment with their tactile muzzles and vibrissae (whiskers) looking for worms and clams to slurp up.

When out feeding, walruses eat up to 50kg a day of these benthic invertebrates. In order to collect this much food they must churn up enormous swaths of seafloor. You can think of the walrus as a benthic rototiller, whose feeding activities release nutrients from the seafloor that would otherwise be buried in silt and mineral sediment flowing from rivers on the mainland and settling out of the water column. Walrus feeding behavior exposes decomposing material buried in the anaerobic (without oxygen) mud to the fresh sea water where the carbon dioxide can be released to feed the primary producers**, and the zooplankton that eat them. The combination of nutritional sediments, larval fish and crustaceans stirred up by the walrus creates a boon of newly available food for bigger fish, and bigger crustaceans; all the way on up to commercial fishermen, seals, seabirds and polar bears. Walruses feeding strategies provide a turbo-charge to the nutrient cycling*** in their feeding areas that support many other species in their community and may last long after they have migrated away. Many researchers believe that walruses may not only be the benefactors of, but also the progenitors of certain hotbeds of productivity on the Arctic ocean and Bering sea such as Hanna Shoals or Bristol Bay.

Although walrus populations are considered to be stable at the moment, the concern is that as sea ice recedes in the north, female walruses can no longer rely on the ice edge to keep them drifting over these highly productive feeding grounds while they raise their young. The female and young walruses may adapt to spending summers on terra firma as they have already begun to do, turning up on Arctic coast beaches, or potentially move into new ranges altogether. The female walruses will necessarily begin feeding in new areas and commuting further with their young calves to feed. What else could major changes in walrus foraging strategy mean for the arctic and subarctic benthic ecology we still know so little about? How will we know if trophic cascades and loss of biodiversity have already begun in these unknown depths?

Some Ecology Words and Definitions:

*Trophic cascade: A collapse of the foodweb due to significant change in one species range or behavior.

** Primary producers: phytoplankton — plant plankton- that subsists on only light and carbon dioxide and nourishes the base of the food web.

***Nutrient cycling: the process by which calories of energy move through a food web.

**** Recruitment: The number of young animals in a cohort that survive to reproductive age, an important factor for stable population size.

bioturbator of Beringia. Journal of Experimental Marine Biology and Ecology 330:403-

habits and recolonization of the Bering Sea benthos. Journal of Experimental Marine