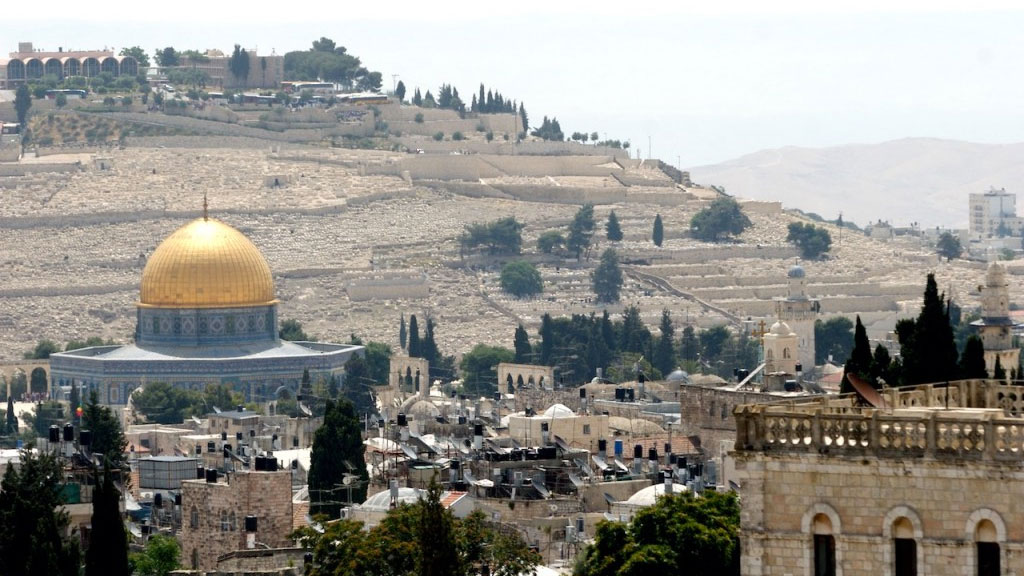 In this photo gallery of three of the holiest places in the world, visit the Sultan Ahmed Mosque (Blue Mosque) in Istanbul, the Grand Mosque of Mecca, and the Dome of the Rock in Jerusalem.

The Blue Mosque (called Sultanahmet Camii in Turkish) is an historical mosque in Istanbul. The mosque is known as the Blue Mosque because of blue tiles surrounding the walls of interior design. I[t] was built between 1609 and 1616, during the rule of Ahmed I. Just like many other mosques, it also comprises a tomb of the founder, a madrasa and a hospice. (bluemosque.co)

Al-Masjid Al-Haram or Masjidil Haram (Arabic: المسجد الحرام‎, The Sacred Mosque or The Grand Mosque) is in the city ofMecca, Saudi Arabia. It is the largest mosque in the world and surrounds one of Islam’s holiest places, the Kaaba.Muslims face in the direction of the Kaaba while performing Salat. One of the Five Pillars of Islam requires every Muslim to perform the Hajj pilgrimage at least once in his or her lifetime if able to do so, including circumambulation of the Kaaba.

The current structure covers an area of 356,800 square metres (88.2 acres) including the outdoor and indoor praying spaces and can accommodate up to two million worshipers during the Hajj period, one of the largest annual gatherings of people in the world. Unlike many other mosques which are segregated, men and women can worship at Al-Masjid Al-Haram together. (Wiki)

The Dome of the Rock is a 7th-century edifice located in Jerusalem. It enshrines the rock from which Muḥammad is said to have ascended to heaven. Sometimes erroneously called the Mosque of Umar, from a tradition that it was built by Caliph Umar I, the Dome of the Rock was actually built by Caliph Abd al-Malik between 687 and 691. The first domed shrine to be built, the Dome of the Rock is a masterpiece of Islamic architecture. The octagonal plan and the rotunda dome of wood are of Byzantine design. The Persian tiles on the exterior and the marble slabs that decorate the interior were added by Suleiman I in 1561. (domeoftherock)

Explore more of the Middle East and religions of that region in these short films and photo albums.