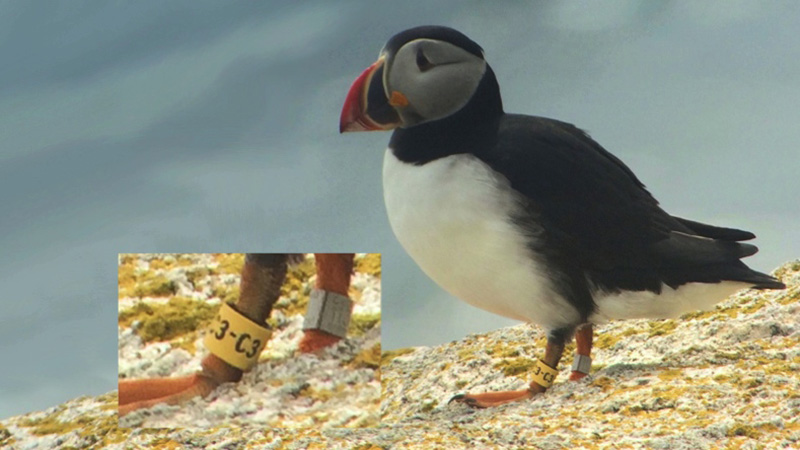 Unlocking the mystery of Puffin C3

Phew! Sorry for the delayed post! The past week is one of the busiest weeks on Seal Island National Wildlife Refuge over the course of the summer. We conducted our annual tern, gull and eider census and now we have tern chicks popping out of their egg shells seemingly everywhere!

But, lets get down to business. What is so special about this mysterious bird that we keep eluding to? Well, C3 was banded as a chick on Eastern Egg Rock (where Project Puffin first began!) in 2013. It was banded on August 7th at 5:20 PM to be exact. Last year C3 made a very brief appearance at the end of July, spending a single day on Eastern Egg Rock. I personally was so excited about this bird because I was part of the crew that helped to get C3 out of its burrow and band it as a young fluffy chick. To me this is where we see the true success of Project Puffin. Puffin pairs are nesting again, producing chicks, and those chicks are returning to start their own families. In addition, so many of the interns that have been a part of this project have “fledged” themselves and running their own conservation projects, are graduate students or have simply spreading the news of this project. Now that’s what I call success!

C3 is three years old this summer and is starting to look more and more like an adult puffin. We have not seen this bird since the beginning of the season when it was first spotted, but we suspect that it will continue to roam around scouting and prospecting potential nesting sites for the future. It is actually quite possible it will return to Eastern Egg Rock to breed, but who really knows, it could be Seal Island NWR!

Now if that wasn’t captivating enough, C3’s father (fittingly C6) is also a very special puffin. C6 is actually a part of our Adopt-a-Puffin program! C6 was banded as a chick on Seal Island NWR in 1997 (he is 19 years old this year). Interestingly enough he visited Seal Island NWR for a single day on May of ’98 and spent the summer of ’99 and ’00 inspecting and visiting nesting sites on Matinicus Rock, Seal Island NWR, and Peitit Manan NWR before ending up on Egg Rock at the end of ’00. In 2001, C6 finally settled into Burrow #40 on Egg Rock and started breeding in 2002. Just when you thought this couldn’t get any more interesting here is another fun fact about C6. C6 was part of the only 3% the entire Atlantic Puffin population that actually bred communally. For multiple nesting seasons C6 and TWO additional puffins raised a chick together in Burrow #40!

Bird bands allow us this unique opportunity to at least get a glimpse of what these birds are seeing over the course of their lives. I find it so fascinating that we have been able to track the comings and goings of both parent (C6) and chick (C3) . If you ever choose to donate to the Adopt-a-Puffin program you will receive annual updates on a bird like C6 or maybe even C3 in the future! Please keep an eye out for this special bird on the loafing ledge cam! It may stop by again soon!