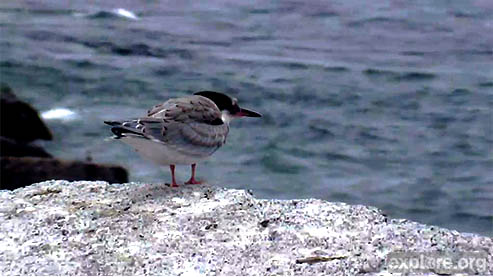 Those Teenaged Years Can Be Hard

While Puffins often steal the show on the Project Puffin Live Cams, the Terns and Black Guillemots have their day as well. Here, a juvenile Tern hangs out on the Puffin Loafing Ledge.

“As the [Tern] chicks grow, they get more and more feathers and start to look like their parents. It takes about four weeks for them to leave the nest–called fledging–after they hatch… Common Terns are found along lake and seashores from Maine to the Rocky Mountains in Canada. They migrate as far south as South America for the winter. Roseate Terns (Sterna dougallii) and Arctic Terns (Sterna paradisaea) also nest on Eastern Egg Rock. They all look very similar, but skilled researchers learn to quickly distinguish them,” click here for hints on how to differentiate the three species.

You can see all the birds live from Maine, right here.