Sometimes being a bear is hard! Overflow the goes over the falls!

Watch this week’s Five Fascinating Facts about Cubs and Subadults:

Here is what you missed this week on #bearcam!

We’ve been catching some beautiful sunrises from Lake Tahoe, CA! 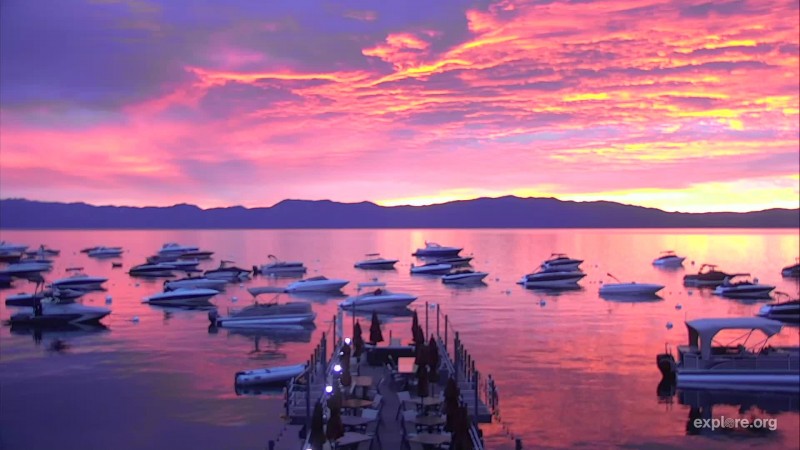 Dear Friends:
I was saddened again by the news this morning about the second osprey chick. Many years ago when I first saw Rachel sheltering her chicks at night, I thought it was about keeping them warm in the Maine night, but now I realize that there is clearly much more to this behavior. Now that we have the wonder of the camera and repeated owl and osprey interaction, I am increasingly aware that the predation we have seen at Rachel and Steve’s nest has repeated itself over many generations. Nocturnal attentiveness by Rachel demonstrates to me how time and trial have led to the behaviors we see today. Guarding the chicks at night is not only about offering shelter from weather. She is protecting the chicks not only from weather but from inevitable predators. It is why she stays at the nest all night without leaving to feed herself, it is why she rests with at least one eye open and why she has the behavior to quickly chase away any large bird near the nest. And it’s why osprey Steve, the nimble protector, focuses on the vicinity away from the nest to chase off diurnal predators like eagles, providing food for Rachel and the chicks- so she can effectively cover the home front. And it’s likely even part of the reason why chicks have a mottled plumage that gives them camouflage against the nest. Seeing this long evolutionary past- leading to the behavior we see today- helps me understand that predation and protection from predation are ongoing dramas that are the backdrop against which individuals like Rachel learn and adjust their day to day behavior (like sitting closer or further from the chick to better offer protection). Owls and eagles have had much to do with shaping the way ospreys look and behave.
Ospreys are also closely linked to humans- especially through their nest site selections. South of Maine along the Atlantic coast of the U.S., more than 90% of ospreys nest on artificial structures (learned this recently from Dr. B). This is because they nest on utility poles, navigational aids and a wide assortment of artificial structures. In Maine that number is lower because many ospreys continue to nest in trees. And wherever they nest in trees, they are vulnerable to owls. At Pond Island NWR in the mouth of the Kennebec River, where Project Puffin researchers are protecting more than a thousand pairs of Common and Roseate Terns, Great Horned owls often raid this colony and the forested islands are more than a mile away.
Whether owls and eagles take osprey chicks or not depends on chance and opportunity. The most recent attack might not have happened if a Great Blue Heron had not lured Rachel off her nest, giving the owl the opportunity to pounce. But clearly the risk at this nest is presently high and the odds of another occurrence are great. We will continue to attempt to deter predation at this nest, just as we would at any bird nest. And I encourage the osprey community to keep the recent predations in context of past success at this nest. Over the previous six years (while we have enjoyed the Explore.org cams), Rachel and Steve have fledged 10 chicks from this nest [see charts at the end of this comment]. And more from the years before. This nest clearly has a productive history. The recent attacks from eagle and owls point to growing risk- but also to the increasing diversity of large predators on the Maine coast- a reflection of the health of the environment.
-Steve Kress

Tune in here weekly for more updates on explore.org!