The Mouth of Brooks River

Near the outlet of Brooks River the “lower river,” as its commonly called, is perhaps the most variable and diverse place seen on the bearcams. The lower river cams provide expansive views, colorful sunrises and sunsets, as well as the opportunity to see many yearly and seasonal changes. 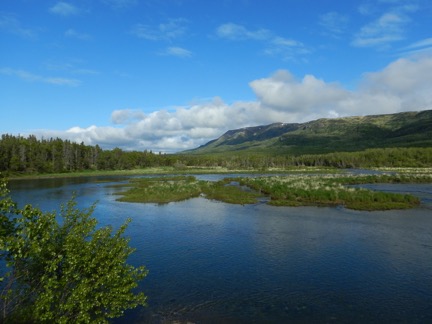 The lower river cameras are positioned on the south side of the Brooks River, just upstream of the river’s outlet. In early spring, before Naknek Lake has swelled with snowmelt and rain, extensive gravel bars and spits border the river mouth. Waves pile gravel in some areas and erode it away from others. Summer and fall storms rework these deposits like sand on a barrier island, making the river mouth one of the more rapidly evolving areas you’ll see on bearcams.

Since last fall, a spit on river right (as you look downstream) has lengthened upstream toward the cameras, while fingers of gravel almost corral the river where it empties into the lake. On the far (north) side of the river mouth, a new gravel bar is forming. An older, taller gravel bar near the trees on that side is migrating too, just slowly inland as it fills a small lagoon. 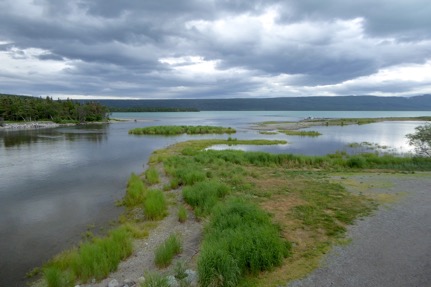 Upstream of the bridge, the river continues to reshape its path to the lake.  It meanders widely now, but it’s also slowly straightening. The major bends in the river carry less water than a decade ago as more and more water begins to take a direct path downstream. An old oxbow near Brooks Lodge has little water flowing through it, while a channel directly north of the cam has growth significantly. In time, perhaps within a few years, the lower river will temporarily abandon its wide meanders and take a more direct route to the lake through what are now only small channels. 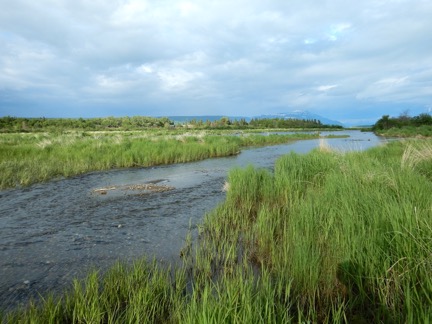 In early summer, the lower river area can be a difficult place for bears to fish. When salmon first arrive, they are energetic and swift swimmers. Without a barrier to impede their migration, they avoid hungry bears more often than not. If, however, relatively low water levels coincide with high densities of schooling salmon, as they did in July 2017, then bears may be able to fish here successfully. Later in summer, we’ll see Naknek Lake slowly rise and flood much of the lower river area. Most of the exposed gravel will disappear and become preferred fishing and resting areas for brown bears seeking dead and dying salmon in September and October.

On the lower river cams, pay attention to the gravel. It tells a story about past and future changes. By July, watch to see hungry bears seeking their first salmon meals of the year. In late summer and fall, the lower river cams provide an exceptional opportunity to witness the bears’ last attempts to gain weight before winter hibernation. The most diverse habitats along Brooks River are located at the river mouth. While Brooks Falls receives the bulk of the public’s attention, the lower river is even more dynamic.