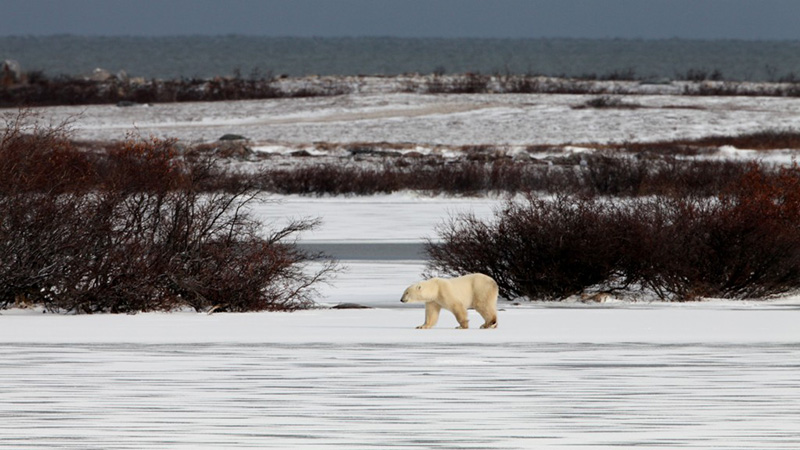 Since the last time we checked in, Ursula has veered back north up to the Manitoba/Nunavut border. She is still well away from land, though she has continued to stay within the western region of Hudson Bay.

Ursula is in a well-known area of seal pupping so she is likely eating pretty well and packing on the fat – when not distracted by male suitors, that is. Our favorite collared bear is trying to get pregnant this spring so her attention will have to be split between potential mates and potential meals.

Once Ursula comes back onto land this summer, she will go into a den and not emerge for about 8 months, meanwhile nursing a demanding cub or two (if things go successfully). This will burn a huge number of calories which is why many pregnant females pack on serious pounds and get enormously fat in the spring before heading back onto land for the summer.

Females need to be at least about 420 pounds before being able to successfully have cubs and many get much larger than that; we are hoping that Ursula weighs in as a polar bear heavyweight by June or July. Of course, this means she will need all the time she can get hunting out on the sea ice, so we will also be hoping for a late sea ice break-up in Hudson Bay as summer approaches.

Since last fall Ursula has traveled 1815.71 km (1128.23 mi) and she shows no signs of slowing down. We’ll continue to update you as she makes her next choice about where and when to travel. And in the meantime, you can track Ursula using Polar Bear International’s Bear Tracker.