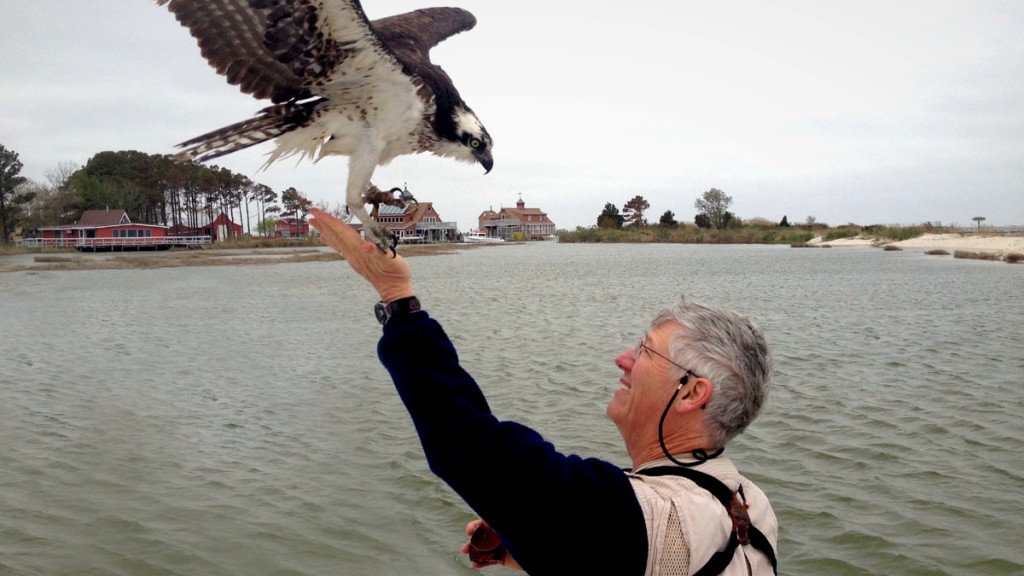 Our first video live chat of the osprey season was unfortunately marred by technical issues, but renowned osprey expert Dr. Rob Bierregaard saved the day by hitting up the comments section to write detailed responses to many viewer’s questions. We compiled the best of his answers here.

Q. Why would an Osprey from a neighboring nest come in and cause trouble?
Perhaps it’s trying to upgrade and take over a nest that it feels is more attractive. Studies with color-banded sparrows have shown this behavior. When an alpha male was removed temporarily, the beta male left his mate and moved into the alpha territory, then the gamma male left his mate and took over the beta territory. When the alpha male was released he reclaimed his territory and everybody shifted back to where they’d been.

Q. Is there a biological timing concerning egg laying? Is it hormone driven or is there a certain time after mating or fertilization?
The timing of egg laying is all hormone driven. And the changes in hormones begin with changing day length in the spring and then depend on courtship to progress, so it is very unusual for a bird to lay eggs without a mate. Requiring the behavioral triggers of courtship assures that a bird won’t waste its energy laying eggs that aren’t fertile. Somehow we’ve tricked chickens into skipping that step so we can have scrambled eggs whenever we want them.

Q. Would you expand on the theory mentioned last year that Osprey “mate” with their nest as much as each other?
Ospreys return to the same nest each year. I made a comment that they “mate” to the nest rather than each other. The two adults winter in separate locations. They’ll both return to the same nest. If they find their mate from the previous year, they’ll usually get right back to mating and all will be well. If one doesn’t return, it will usually be replaced. Sometimes this can be a messy process. But my comment about ‘mating’ to the nest was to dispel the notion sort of implied by “mating for life” that a bird wouldn’t replace a mate that didn’t return in the spring.

Q. Do Osprey couples migrate separately?
Osprey pairs do not spend their winters together.

Q. What makes Osprey feet and talons unique?
The talons are extremely curved, probably more so than in any other raptor and the soles of their feet have little spikey things called spicules which make it easy to catch slippery fish. It’s like having gloves made of sandpaper.

Q. When the Ospreys go to South America for the winter, do they have permanent areas or nest down south or do the Osprey just roam around and overnight in the trees?
Ospreys down south do not have nests, just favorite perches. They go back to the same place every winter.

Q. Have you tracked mating osprey and if so what new information have you learned? What is the farthest you have seen an osprey travel from it’s nest to find fish?
Tracking adults feeding young we sometimes find them going as far as 20 miles to catch fish. But this is the exception. Some birds can stay very close to home. Ranging 5-10 miles is not uncommon at all.

Q. So, is the male Steve or is he not Steve?
Very hard to say. We haven’t done any sort of testing feathers, etc., so only going by plumage, it looks like the same bird. Behavior is a really good indication. So if you see this bird doing things very differently than last year, it’s probably a new bird.

Q. How do ospreys choose their mate?
The female chooses her mate based in large part on his behavior. He will “sky dance” over the nest with fish he’s caught, showing off what a good fisher he is. She will probably also make her decision based on–you guessed it–location, location, location. And we have no idea what makes one place a good one to an Osprey’s eye. We have nest sites on Martha’s Vineyard that were used for years and have now gone vacant for years. Nothing seems to have changed. We’ll never understand it all!

Males use their sky dance to impress the females rather than their coloration, which is pretty drab. Besides the “necklace” there’s very little difference btn males and females. There are some subtle differences in underwing patterns that better birders than I can spot.

Q. The “Necklace” – Male vs Female… Is it a myth or outdated info that males do NOT sport a “necklace”?
On the great necklace debate, there is no definitive answer. If you see a bird with a really dark chest, it’s a female. If you see one that’s snow white below, call your bookie and bet on it being a male. There are intermediate birds of both sexes. Some males have a bit of a necklace, some females have a weak one.

Q. Does human activity disturb the nesting ospreys?
Ospreys can be very tolerant of human disturbance, particularly late in the breeding season. The worst case is when a pair sets up a nest in a secluded spot and gets used to very low disturbance levels by humans. If then a lot of activity begins, the birds can abandon the nest. But if they set up where there are a lot of people–like a light pole in a Walmart Parking lot–from day one, then they’re amazingly tolerant of disturbance. My guess is that young that were raised in areas of high human activity are likely to be the ones tolerant of disturbance.

Q. Dyfi Osprey Project produced an interesting article on inbreeding among ospreys, pretty much turning our ideas of inbreeding upside down. Are you familiar with these ideas and do you have an opinion on them?
I don’t know what evidence Emyr Evans of the Dyfi Project is citing to show that inbreeding is common or that it can be beneficial. I suspect, given the propensity for male Ospreys to nest very close to their natal territory, that some inbreeding is likely, especially in isolated colonies started up by hacking (reintroduction) projects. Typically, females wander farther from their nests than males (true in most bird species) and this is nature’s way of reducing the probability of inbreeding. I don’t know of an argument that suggests inbreeding would be good. We know there are deleterious consequences. Maybe the argument is that local birds are genetically adapted to local conditions, but the general consensus is that genetic diversity is a plus. I’d be interested to hear more on this.

Q. Does the level of intelligence differ in individual ospreys?
I don’t have much experience that would let me comment on differing levels of intelligence in Ospreys. There’s no reason to think that there wouldn’t be. Every generation of every species of sexually reproducing organisms (our own included) includes combinations of genes that work well and those that don’t. That’s how things evolve and that’s why we have Ospreys! Whether this is a sign of intelligence or not, we’ve had birds that we’ve trapped easily one year to deploy a transmitter and then when we tried to trap them again to remove the transmitter, they just laughed at us–well, not really, but we sure couldn’t catch them a second time. And some birds we’ve been able to recapture.

Q. Could the recent male intruder that Rachel tolerated been on of her recent offspring?
I suppose so. It would have been a young from 2 years or more before, because young Ospreys do not return in the spring immediately after they migrate south, but spend a “gap year” down in South America (or wherever they wintered). Without color banding, we’ll really never know.

Q. If Steve had not made it back, would Rachel allow another male to mate with her?
If the male intruder showed up before Steve returned, Rachel would not reject his courtship. If he were acceptable to her, she would begin the courtship process with him. She can’t know if Steve will return and she cannot afford to wait for him to get back. She doesn’t ‘love’ Steve and won’t pine away if he doesn’t return. This is what I meant when I said the birds “mate” to the nest site rather than each other. If she’s part way through the courtship when her mate gets back, he’s likely to win the battle over ownership of the nest. “Home-court advantage” is big in birds. If it’s your territory and you know it, you’re going to fight very hard for it. Young intruders often get the message and will back down.

Q. If another male mates with a female before he returns to the nest and mates with her, can he recognize if the eggs she produces are not his? Does he eliminate those eggs?
A male Osprey cannot tell if an egg is his or not. But if he sees his female mating with another male, he may kick any egg he finds out of the nest. We saw this happen in New Hampshire two years ago, and I think it’s happening again at a nest over in Great Britain.