Some of you never met Madelaine “Maddie” Martin, but those of you who did could never forget her.

She was 16 when she started cam op’ing for us. This was after a false start (of sorts). She was due to start on February 9, 2015. I got a call that morning from her father saying that Maddie had been rushed to the hospital ICU and it was very serious. This was the first of many days I waited, thousands of miles away, while she fought for her life. Her parents, her brother, and his service dog waited by her side. One day turned into three months. 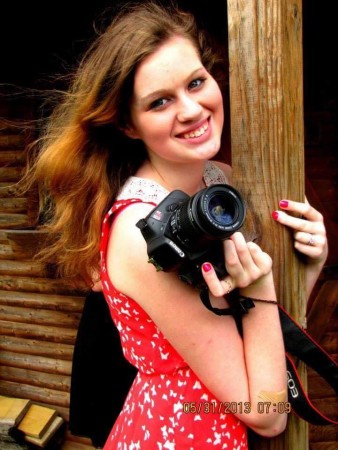 The first thing she did when she was released and got home was write me an apology for missing her training session. And she asked if I would give her a second chance! Would I ever!

She was an exceptionally quick study, with a natural eye for light and beauty. And she took the most fantastic photos. I could hear her mother in the background changing out her central line while we looked for great views on a puppy camera.

She was homeschooled and dependent on feeding and breathing tubes to live each day. Mitochondrial disease gave her time to be on the internet, finding unique views and learning… constantly learning. Her parents always thanked us for giving her the opportunity to expand her horizons. Through explore.org, she met people who became her friends and saw the world through the eye of a camera lens (sometimes with her pet Chinchilla, Lucy, sitting on her shoulder).

Since Maddie was also autistic, friendships didn’t happen easily. But, the explore.org spirit prevailed and she was free and without earthly limits when she was on the cams. Even at her sickest, she would send me cryptic, one-word Skype alerts saying: “ORCAS!!!” “Hoover!!” “Magic!” I would drop everything and rush to each site to find a great view to share on Facebook. I nicknamed her Secret Agent “M” because of her stealth-like appearances and her ability to interpret and predict animal behaviors.

She wanted to be a veterinarian, so it made sense that she would become attached to the Big Cat Rescue Windsong camera. She would have stayed on that camera all day, all week, all month, if she could have. She knew every cat, every procedure, and remembered details that amazed us all. She still watched every surgery even after she was too ill to run the cameras. She hated to give it up.

The last time I spoke to her, she “rode” along with me on the Brown Bear cameras. I did the driving and was lucky enough to find Grazer and her cubs at Brooks Falls. Maddie was amazed at how much they had grown since the start of the season. She could only stay online for 10 minutes because it tired her out. But we promised that we would do it again soon.

On November 28th, Maddie texted to tell me that the Cayman tour needed to be adjusted. She signed off because she was too tired to run the controls, but not before saying “talk to you later love you.”

A month later, on the morning of December 27th, Maddie lost her battle with Mito. Her father called to tell me and said she left this world peacefully, with her parents, younger brother, his service dog, and Lucy by her side. Most children with mitochondrial disease don’t make it out of their teens. Maddie made it to 20, on her own terms… all the way.

Explore.org changes lives every day. It changed hers as I’m sure it has many of yours. It changed mine forever by giving me the opportunity to meet many extraordinary viewers, partners and camera volunteers, and a very special family with a young girl who had every gift except the gift of health.

Rest well, Maddie. I love you too. So does everyone in the explore.org family. Her spirit will be with us for the rest of our lives.