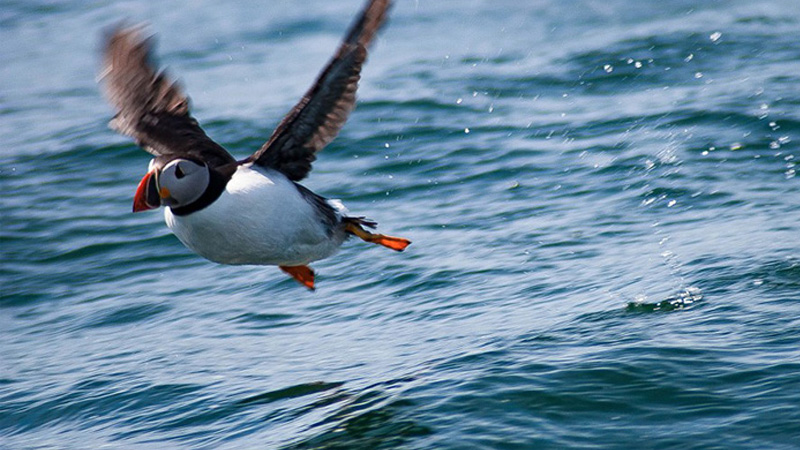 Arriving at the dock in Bremen, ME, I couldn’t contain my excitement. Thinking about the fact that I was about to spend a week on an island in Muscongus Bay looking at birds as part of the Coastal Maine Bird Studies for Teens Camp — it was a dream come true. I was to be on the island with twenty other teens, all of us who share the same passion. I collected my bags from the car and boarded the boat over to Hog Island. Once there, I found my room and started exploring. To my surprise, as soon as I started walking I found the large nest of Rachel and Steve, an Osprey pair, right next to the dining room. I had been watching these two for years via a live stream and now I finally got to see them in person! Not only did I get to see the Osprey pair, but I also saw many Eastern Phoebes, Purple Finches, American Goldfinches, and Song Sparrows. After dinner, we went on a nighttime owl walk. One thing I learned early on was that bug spray is a must, but aside from the constant buzz of mosquitos, the walk was enjoyable. Although only distant owl sounds were heard, I was able to learn more about the species of owls one can find and their calls. All in all, the first day was amazing and I couldn’t wait to find more bird the next day! 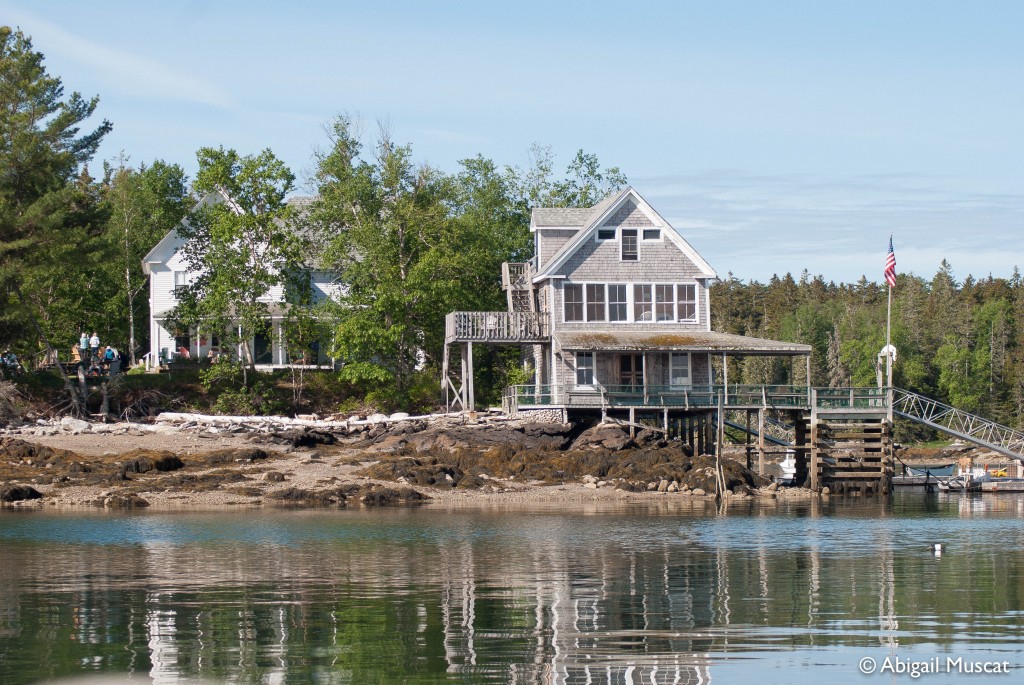 I have never been a morning person, but this week seemed to change that for me starting with the first morning. I woke up at sunrise and went on a morning bird walk along some woodland trails. Before the day’s events, I had some time to explore the area and I found a hummingbird feeder with an adorable Ruby-throated Hummingbird sitting on a branch nearby. Then, we boarded the boat and cruised into Muscongus Bay. Not only did we see birds on this cruise, but we also learned more about Hog Island and the surrounding islands. Some of the species we saw included Common Eiders, Surf and Black Scoters, Double-crested Cormorants, a Great-Blue Heron, Black Guillemots, and many gulls. In addition to bird species, we also saw many seals and even a dolphin! At the end of the “Shakedown” Cruise, we pulled up a lobster trap and got a good look at some of the lobsters in the bay. After lunch, we went on an afternoon hike on some of the island trails and this is when I was able to start learning birds just by their songs. Also, we got to meet the Artist-in-Residence and learn a few sketching tips from him.

The third day was spent “Mainland Birding.” After a morning bird walk and breakfast, we boarded the boat back the mainland and visited three locations for birding. The first stop was on a gravel road that was flanked on both sides by forests. Here we spotted many Warblers and Sparrows, as well as Ruffed Grouse. One of my favorite sightings of the day was a Scarlet Tanager. The second stop was at the Great Salt Bay Farm and Heritage Center, part of the Damariscotta River Association. Here we saw Cedar Waxwings, Eastern Bluebirds, a Hairy Woodpecker, and Yellow Warblers. The main reason we stopped at this location was to see Bobolinks, and we were not disappointed. The third and final stop was the Hidden Valley Nature Center (Midcoast Conservancy). Some of the highlights of this stop included a visit to the bog and an Ovenbird nest.

The fourth day we went to Eastern Egg Rock!! This is the day I had been looking forward to all week. First, we circled EER looking at the seabirds in the area, and then in groups, we boarded a rowboat and landed on the rock. I had previously gone on puffin cruises that go around Eastern Egg Rock, but had never stepped foot on the rock until now. Once there, we met the researchers who were staying on EER. Around the rock were bird blinds, and for the first part of the afternoon, we got to each have our own blind. It was a truly amazing experience being able to sit alone in a blind, feet away from birds such as the Atlantic Puffin. Not only did I see my favorite bird, the Atlantic Puffin, but also Roseate Terns, Common Terns, Arctic Terns, Common Eiders, Black Guillemots, Razorbills, and even a Savannah Sparrow. After spending time in one of the bird blinds, we had lunch and then we helped out the researchers with some tasks around the rock. Some of us assisted with building a new, bigger blind, while others of us helped cut back some of the grass on the trails. Also, we got to take turns going up on the roof of the research building to get a better view of all the tern nests and the rock as a whole. This day was amazing, and while I didn’t want to leave Eastern Egg Rock, I hope that in the future I can return, maybe even as an intern.

The final day was another day full of adventure. I was up with the sun to use professional recording equipment. Angelika Nelson helped us learn how to use the equipment and she was able to play what we recorded so we can hear the results. We were lucky enough to hear a Common Loon calling and even luckier to have our recording device on at the right moment. After breakfast, we boarded the boat and headed to Burnt Island, accompanied by a professional bird bander. Once on the island, we set up in a wooded area, played some bird songs and waited. We banded a number of birds including a Swainson’s Thrush, a Black-throated Green Warbler, Common Yellowthroat, Red-breasted Nuthatch, a White-throated Sparrow, Dark-eyed Junco, and Magnolia Warbler. I was lucky enough to release the White-throated Sparrow, which was amazing. In addition to the ones we banded and measured, we also spotted Red Crossbills, an American Redstart, and a Golden-crowned Kinglet. On our way back to Hog Island we passed by a Double-crested Cormorant nesting area. There we so many Cormorants! With fresh lobster and the cutest puffin dessert, it was the perfect end to an exciting day. 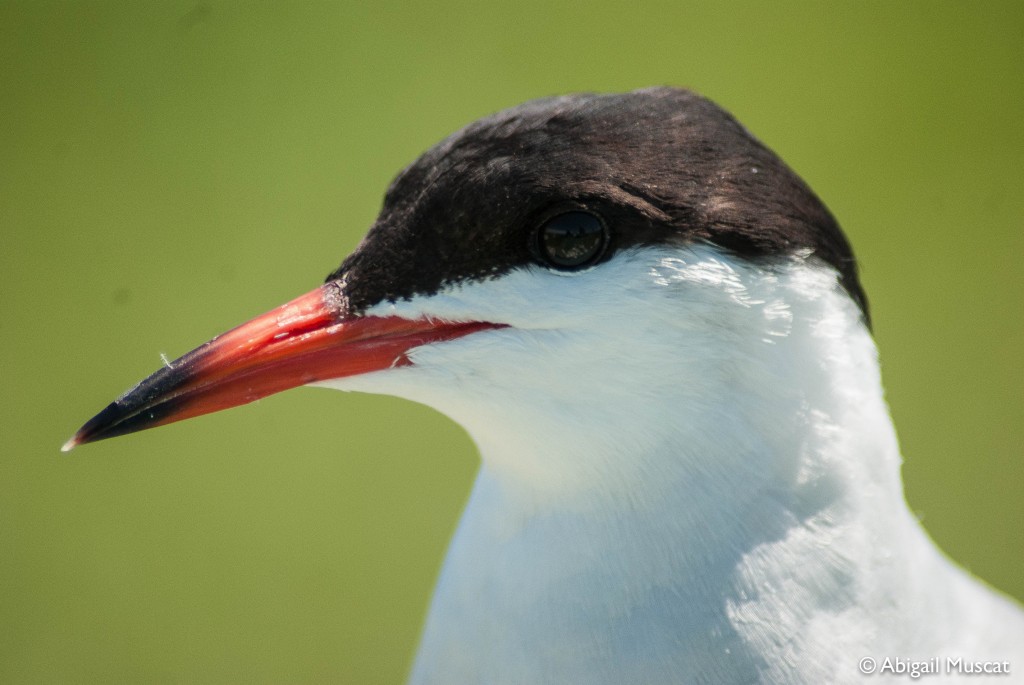 Not only was there a bird walk every morning, but also every night there was an interesting lecture. Steve Kress (a hero of mine) gave a presentation on the history of Hog Island and Project Puffin, Angelika Nelson, the curator at Borror Lab of Bioacoustics at Ohio State University discussed bird song and spectrograms, and Drew Fulton and Derrick Jackson both discussed what it’s like to be a photographer and their early careers.

Overall, the week was one of the most amazing weeks of my life. I was up at 5:00 am at the latest every morning and awake till 11 pm every night — living on an island — but I didn’t mind. Not even the heat of the first two days was enough to dampen my spirits. It was an absolutely incredible experience and one I will never forget. I met many amazing people, from my fellow teens to the three amazing instructors we had (Corey, Josh, and Heather), and was able to make some connections for the future I am so grateful for this experience and am glad I was able to explore my passion for nature, the ocean, and birds in such an extraordinary place. 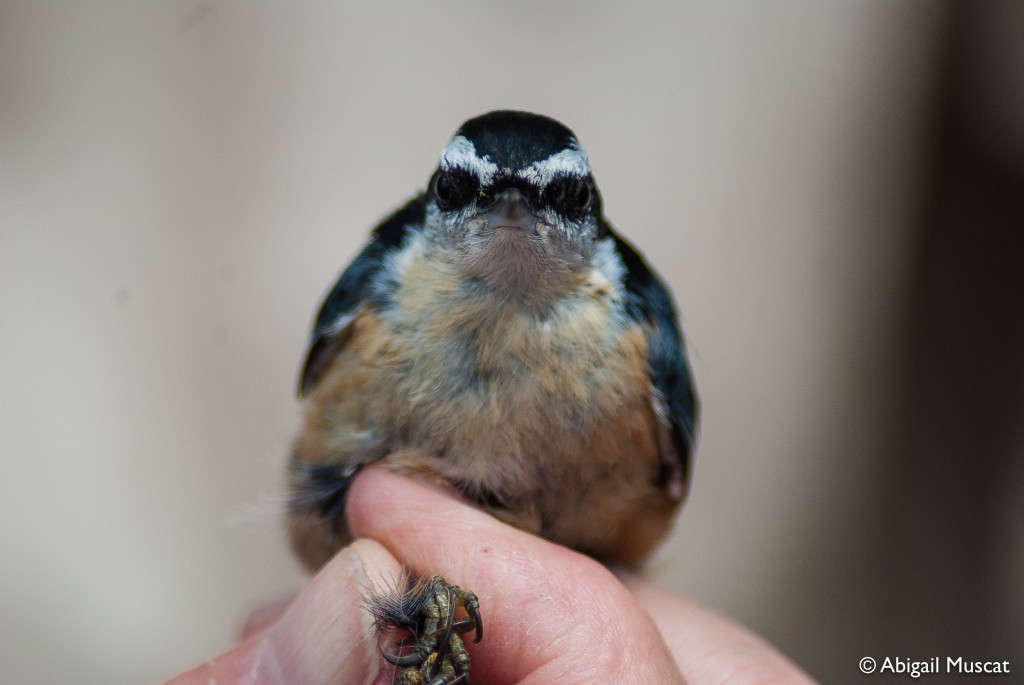