Near the end of October, few salmon remain in Brooks River and bears begin to migrate to their denning sites. Like the bears’ metabolism in preparation for hibernation, solar power dwindles and the cams eventually go dark. The end of bear cam season can seem a bit melancholy for many of us who watch the cams frequently, but it’s also a great time to reflect upon the season that was. Here are a few of my favorite bear cam moments for 2018

The First Salmon
At Brooks River in late spring, I always feel a sense of anticipation. It’s a time of renewal, when the land regains its green hue and nearly twenty hours of daylight flood the sky. The return of salmon represent summer’s arrival and the beginning of a season of plenty. For bears, the first fish are especially important. Bears experience hunger in very different ways than people. By June, they have largely subsisted on body fat for the previous eight months, and salmon offer bears the opportunity to satisfy their profound hunger, at least temporarily. At Brooks Falls, we witnessed bears catch and eat their first salmon of the year. I could almost see a look of satisfaction on the bears’ faces as they feasted on their first significant meals. 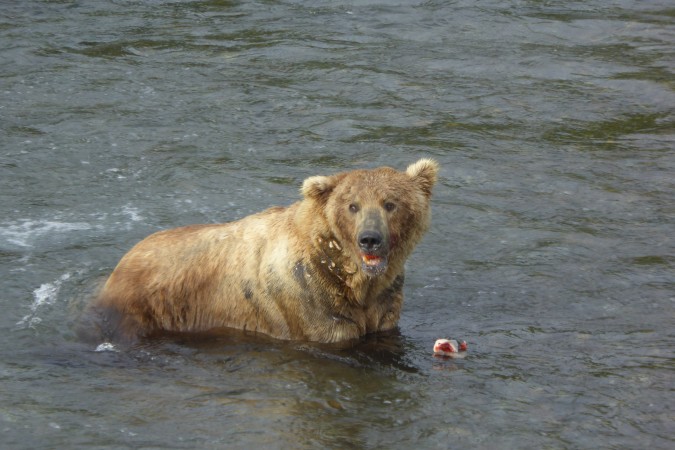 The Bear Hierarchy
Brown bears live within a hierarchy where large body size and assertive dispositions provide greater access to food and other resources. Appearing fully healed from a 2017 leg injury, bear 856 regained his position at the top of the Brooks River hierarchy. His foothold wasn’t unchallenged, however.

An Exceptional August
I’ve come to expect few bears at Brooks River during August. This year my expectations were completely wrong. Bears fished continuously at Brooks Falls throughout August 2018. An impressive run of silver (coho) salmon kept bears well fed and motivated to stay. It reminded me that nothing at Brooks River is static. 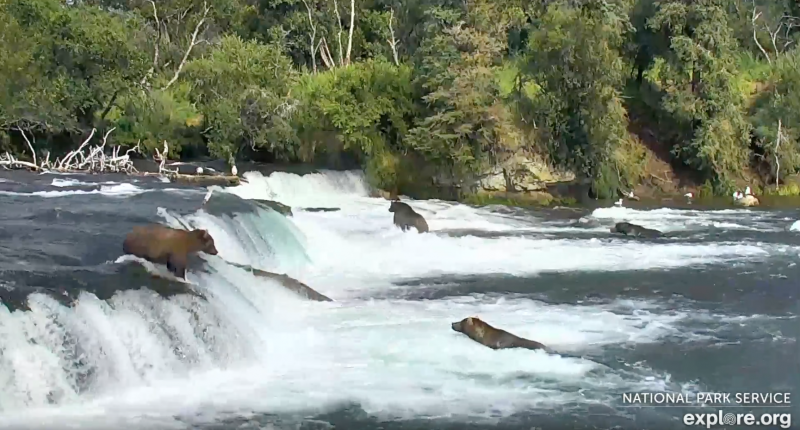 Inquisitive
Plenty of food provided many young bears the time and energy to express their curiosity and playfulness. Bears are eager to investigate strange and new objects in their environment. Even things as common as a downed log can draw their attention if it presents a novel situation.

Bears Get Fat
This was an expected event as bears eat a year’s worth of food in six months or less. Yet, I still marveled at their physical changes from early summer to fall. Bears can lose one-third of their body weight during hibernation, and salmon offer them the best opportunity to get fat and get fat quickly. By September, the bears demonstrated their tremendous ability to gain weight in preparation to survive the long winter ahead. 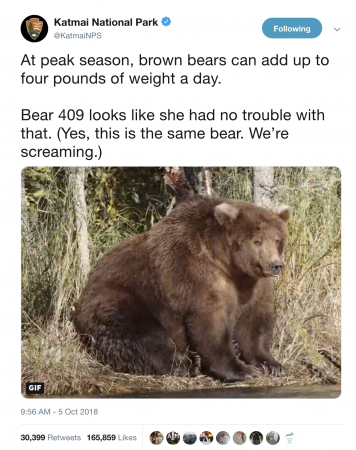 Uniqueness
No camera provides more novel views of Brooks River than the underwater cam. Attached to the bridge near the mouth of Brooks River, I never tired of watching salmon or swimming bears.

When Brooks River’s bears disappear to their dens, it’s a time to reflect on the season that was. This summer I saw many examples of satisfaction, change conflict, hunger, and novelty. What were your favorite moments from the bear cam in 2018?