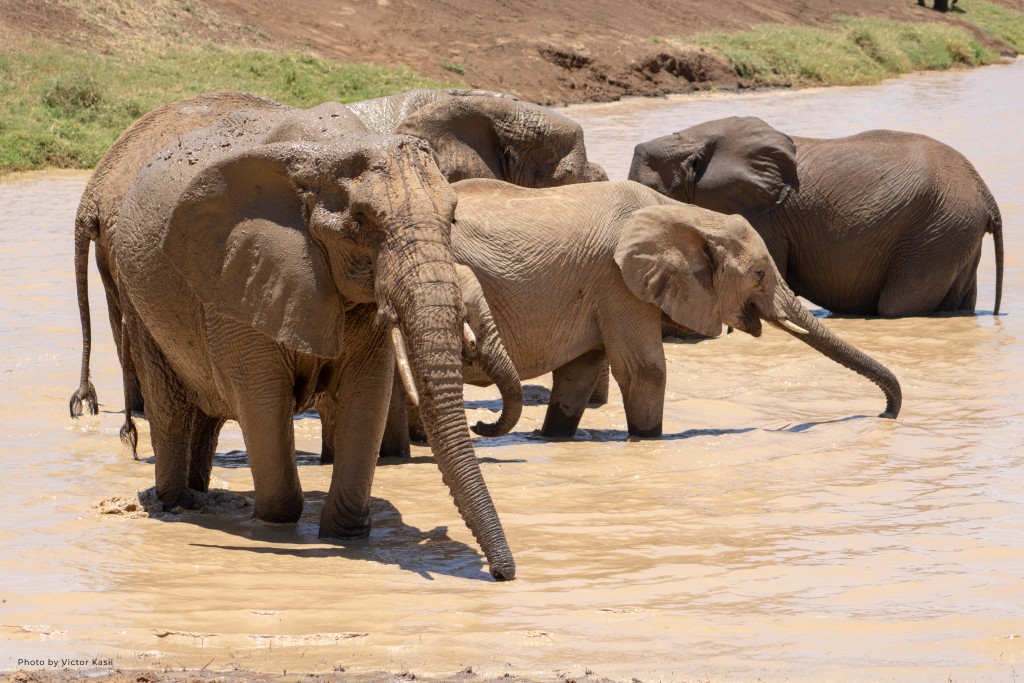 Injured Elephants Treated in the Wild: Calf Rescued and two Adults on the Mend!

It has been an eventful couple of months at Mpala, the home of African wildlife on Explore. First, we reported the daring dramatic rescue and treatment of a snared elephant calf in August, followed by a series of events along the Ewaso Ng’iro river that were triggered by the death of a hippo in the water. And a week ago, a 13-to 15-year-old male elephant was discovered with a dislocated or fractured rear left leg while another, a 30-year-old female had a ghastly soccer ball sized tumour protruding out of her belly. The male must have gotten the injury either in a fight or had been stranded in a pit. 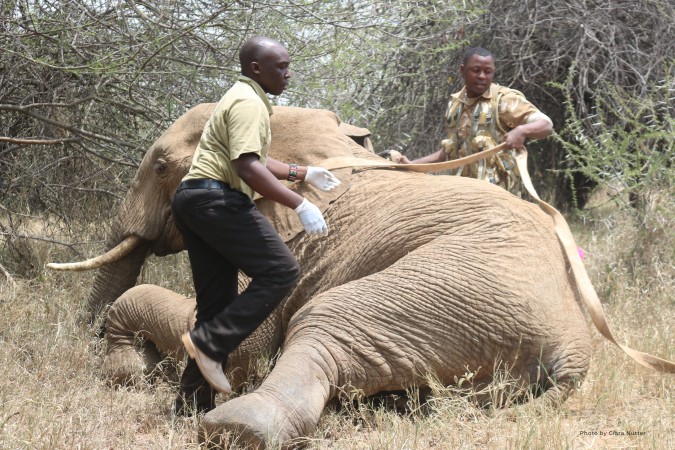 Dr. Mijele and a KWS ranger in action.

“The elephant’s leg is shrinking due to muscle atrophy. Muscle atrophy is when muscles waste away due to lack of physical activity.” Dr. Mijele of the Kenya Wildlife Service (KWS) explained after administering a round of medication including painkillers, antibiotics and calcium. As we watched the elephant limp away, Dr. Mijele summarised what his hopes for animal were.
“He is young and hopefully will recover but sadly may become lame because the knee joint is badly damaged.” He concluded with a despondent look.

As the KWS mobile vet team together with the resident Smithsonian Institute veterinary fellows reassembled for a quick debrief, Major Pius Muia, Mpala’s head of security, left with some of his team to establish the exact location of the second elephant. Soon, we were on its trail, directions coming through via the UHF radio. “We have tracked this elephant for nearly 5 miles (8km).” Mwenda, part of the security detail, said as he pointed out the female elephant in the bush.

Hardly moving, the elephant stood in place as Dr Mijele shot a tranquillizer loaded dart. The elephant went down slowly but lay on the raw swollen wound on her right side complicating the situation for a moment. Blood oozed out as the teams speedily maneuvered to turn her over. 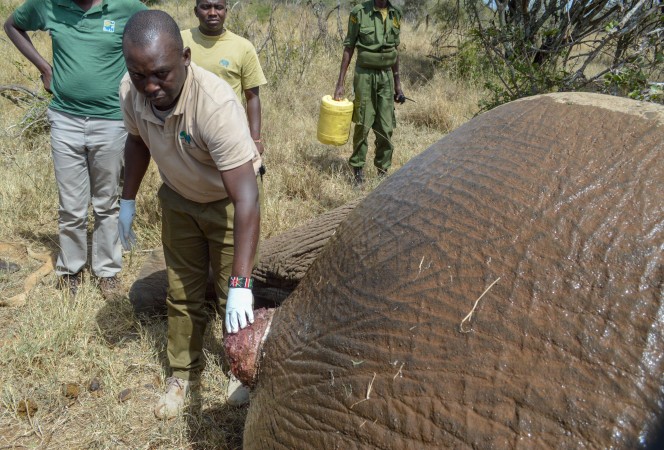 Dr. Mijele checks on the elephant soon after it was turned over. Photo by Rebecca Composto

A fully grown female elephant can weigh up to 7,125 lb (3,232 kg). With a rope harnessed around her belly and legs, the vet Landcruiser unit was used to safely roll her over. It was obviously a disturbing sight as the vets went into action cleaning the wound with hydrogen peroxide and iodine before sealing it with green clay and oxytetracycline spray.

“I have not seen a case like this one before but I believe the medication will reduce pain and swelling.” Dr. Mijele explained. ” The prognosis is fair because this tumour is hopefully benign. The main complication right now is that she appears to be pregnant.”

Dr. Mijele could not risk removing the tumour immediately for fear of breaking the abdominal wall and causing excessive haemorrhaging. “We hope she will be able to give birth and take care of the calf for about a year or two,” Dr. Mijele said as he took samples of the growth for further investigation in the lab. This will determine whether the tumour is indeed benign or cancerous.

While cancer takes away 20,000 human lives each day, it rarely affects elephants despite their large bodies. They are giants of the animal kingdom and have trillions of cells more than humans, cells that could potentially turn into cancer. This case on Mpala is very rare as less than 5% of elephants get cancer as opposed to 11-25% of humans. 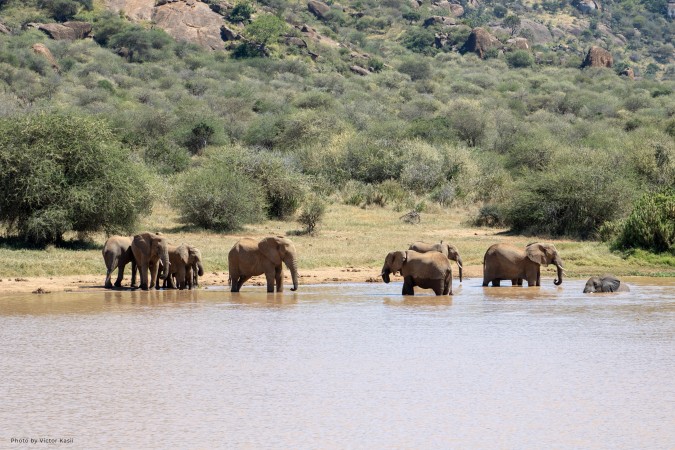 An elephant family at a watering hole on Mpala

“The severity depends on what part of the body is afflicted. If it is the eyes and the animal becomes blind, then it has no chance of survival in the wild,” said Dr Mijele. “We cannot tell what caused this until we do further investigations but it could be anything from plant toxins to pollution or it might be hereditary, which I hope it isn’t.”

In the coming weeks, Dr. Mijele and his team plan to return to what they hope will be the safe removal of the growth, saving both mother and unborn calf. As if to cheer them along, the badly injured calf and her family that we first reported on a few weeks ago have returned to Mpala. The calf appears to have recovered fully, with a slight limp but otherwise in good health! It is exciting to report again that the baby elephant is healing well and has been filmed swiftly navigating its way among the ever protective herd.

“This is a young animal and as long as you keep infection away, it will heal,” says Dr. Mutinda.

On the ground, the Mpala team continues to monitor all three elephants. We hope to see them all in good health patrolling the edges of our screens on the live stream at Explore.org.

p.s. For more on treating elephants in the wild see: The Matriarch. It tells the story of Jada. She was limping with her right shoulder bleeding from three bullet wounds, when Enock Ochieng, manager of the Mpala Elephant Monitoring Project, saw her emerging from the bush.