The Death of a Hippo and the Circle of Life

This week at Mpala, the home of African wildlife on Explore, viewers saw a fully grown hippo laying dead in the water. For two days, other hippos swirled around their dead, perhaps in an attempt to get her up. The animals appeared to be grieving, a heartbreaking scene for viewers on Explore.  And a significant question remained unanswered. What killed the hippo?

“Sometimes, they die, of natural causes. It is all part of a natural cycle.” Alick Roberts, Mpala’s General Manager remarked after a visit to the site.

The dead hippo was a female with no signs of an injury, ruling out a territorial war with another hippo. In the savannah, only a number of species can take down a live and fully grown hippo. While some predators will take a chance with a juvenile hippo, most animals will avoid a confrontation. A pack of hyenas, a pride of lions, a Nile crocodile or a cornered elephant might risk an attack. The carnivores are likely to go for a kill when they encounter a vulnerable or injured hippo. This often takes place at night when the hippos are out of the water grazing. 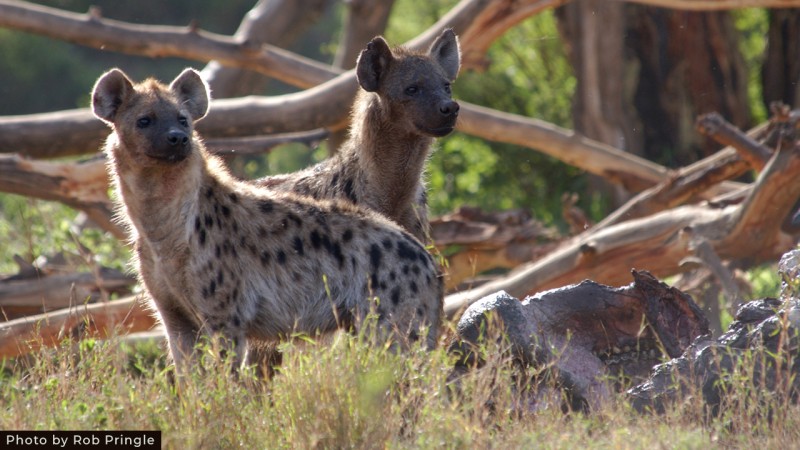 To the Mpala team, a rotting carcass of a large animal in the river presented a significant dilemma. While hippo poop adds terrestrial nutrients to the water, a decomposing 3000 pound (1500kg) carcass in the middle of the river is not good news for the people using the river water downstream. As the reality of the dilemma presented itself, viewers on Explore pondered on what might have killed the hippo. Then, nature’s cleaning crews saved the situation when they moved in and helped with the removal of the dead animal. At first, a Nile monitor lizard was making the attempt alone, eating into the carcass. But soon enough, help arrived in the form of at least 10 strong jaws of a pack of spotted hyenas. Voracious predators, spotted hyenas feed on all herbivores, including wildebeest, African buffalo, zebras, gazelles, and impalas. They prefer to feed on larger animals with a body mass between 123 and 401 pounds (56 to 182 kg) but will kill larger prey, including giraffes, juvenile hippopotamuses, elephants, and rhinos, if the opportunity arises. Spotted hyenas consume everything, including the bones. The acidic digestion of spotted hyenas is adapted to extracting nutrients from bones, which causes the pale colour of their faeces. On average, an adult spotted hyena eats about 4.4 to 8.8 pounds (2 to 4 kg) of food each day. They track prey using sight, hearing, and odour.

Noticeably, vultures are missing out on the feeding frenzy. “I have not seen any of the vulture species on the live cams.” says Anne Mukoma, who has been a cam operator on the Mpala Live team since Explore first switched on the live cameras in 2014. However, a few months ago, there was excitement during a research field visit to Mpala by researcher Dr. Shana Caro from Columbia University. She filmed a short sequence of Rüppell’s Griffon Vultures and some African White-backed Vultures (adults and juveniles) on a zebra carcass left by lions on  April 4th 2018. The birds have not been seen since. Worldwide, vultures are considered one of the most threatened groups of birds.

The biggest threat is the incidental poisoning of vultures, which occurs when people try to eradicate feral dogs and animals such as hyenas, lions and jackals, mammalian predators of livestock, by using poisoned baits.

Back at the Hippo Pool, with the help of the hyena clean-up crew, communities downstream dependent on river water will continue to enjoy the waters of the Ewaso Ng’iro river. Having dislodged and reduced the size of the dead hippo from the river bank, the Mpala team was able to remove the carcass from the water, shifting the hyena pack onto the clearing along the river. The cameras continued to capture this and before long, all the remains of the hippo were gone!