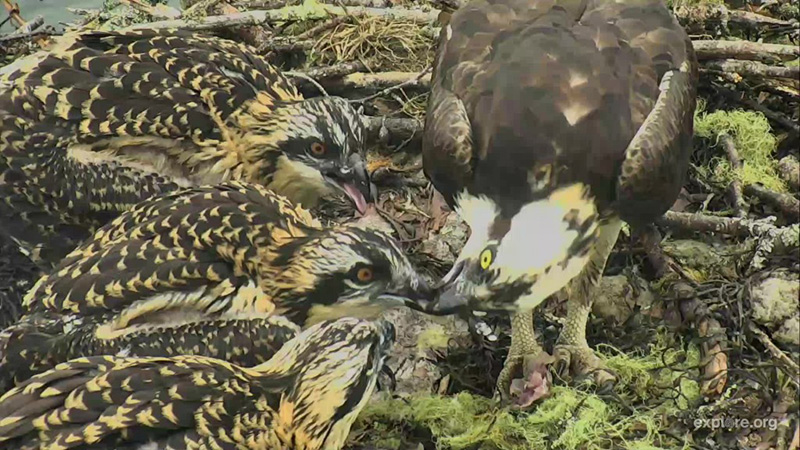 Rachel feeds her chicks hours before the owl attack. Snapshot by GAngel

In sad news from Audubon’s Hog Island Osprey Nest, one of Rachel and Steve’s chicks was taken from the nest last night by a Great Horned Owl. The owl snuck in little after 1am ET, snatching the sleeping chick as osprey mom Rachel tried to defend her home with wings, talons, and warning calls.

It’s suspected that the chick taken was Sierra, named by fans, though we will continue to update with information as we learn more. This summer marks the third in a row that predators have taken osprey chicks from this nest; the last two years saw daytime bald eagle attacks, but Rachel and Steve continue to return.

Audubon’s vice president of conservation and director of Audubon’s seabird restoration program Steve Kress says in an article on Audubon.com, “I think what we’re seeing is a typical kind of scene, where some chicks fledge, and some chicks are predated. I don’t think they’re gonna move. If they fledge any chicks, they’re going to keep coming back.” And despite these tragedies our fans return to the osprey cam yearly to see the family.

Kress continues, “What we’re seeing here as always with these cams is a window to the real challenges of living in nature, where you’re constantly on guard, and the parents are making these decisions about whether to risk their own well being for the chicks.”

Watch the osprey family at explore.org/ospreys