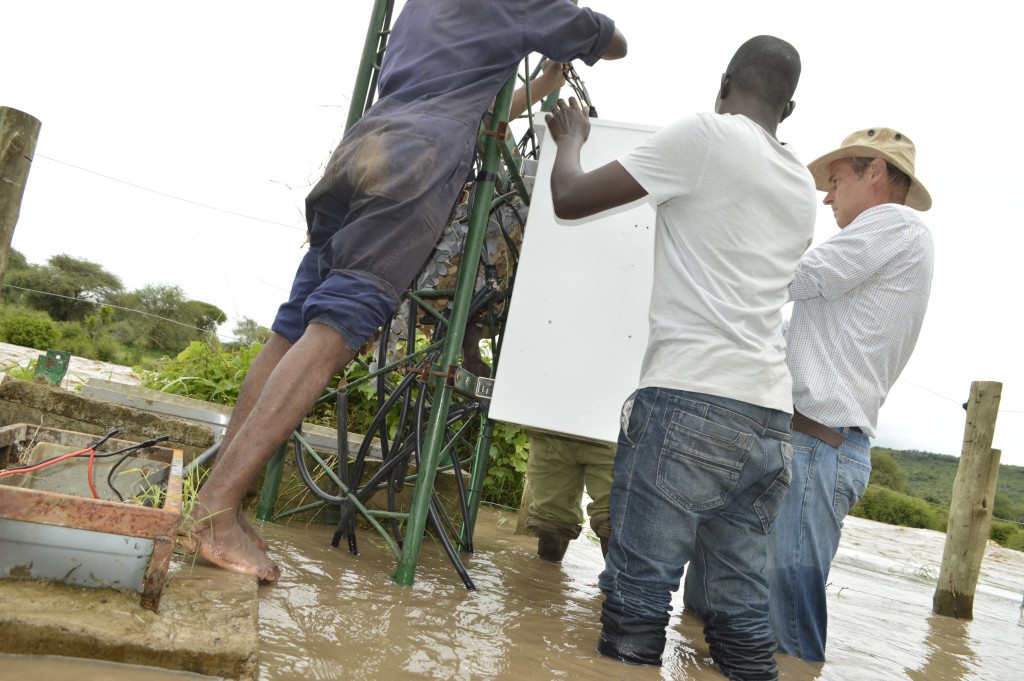 Salvaging the broadcast equipment during the floods on the Ewaso Ng'iro

High-Water Drama at the Hippo Pool

It is the morning of Tuesday, April 24th, 2018, and from my desk in the MpalaLive.org control room, I have an over-the-shoulder view of the camera operators, monitors, and navigation tools. The Ewaso Ng’iro river is rapidly rising and the hippos have been relegated to the edges of the opposite river bank.  Fred and Anne keep tilting their cameras to scan the tower base for signs of flooding.

“We need to take the batteries out, now!” Fred shouts. The rushing Ewaso Ng’iro waters have broken its banks and quickly engulf the cameras tower base.

Only a couple of days ago, George had raised concerns over the ever-rising Ewaso Ng’iro. “I think I am going to be in serious trouble if the river keeps rising like this.” He said. George is the resident IT engineer but we like to call him ‘guru’. That afternoon, as we drove down to Mpala’s favourite watering hole to scout the area, I couldn’t help but wonder what it would take to flood the Ewaso Ng’iro. George estimated that in the event of a flood, it would take up to 45 minutes and a team of three to secure the equipment including the transmission box with radio receivers, cameras, batteries and configuration wiring.

To compound our odds today, George and our operations manager, Gikenye are away, on business. Yet, decisions have to be made, urgently. Do we shut the cameras down? Should we wait this out and hope that the water recedes?

I think it is time to drag everyone on campus into the crisis.

“The camera tower base will be underwater in the next five minutes.” Anne is calmly nudging us to quickly get out and salvage the batteries. I run out to get help from Major (rtd) Pius Muia, Mpala’s Security Manager.

“Major, we have an emergency. We need a car and security down at the pool. We’ll have to take the batteries out as the river has broken its banks.”

Beatrice, our admin manager is on the phone with George while Fred is at the workshop putting together a toolkit.

In a few minutes, we are on our way. I am driving Major’s cruiser. Fred is explaining to Kibet our security guy, who is half listening while coordinating another team on the radio to meet us down at the pool. Anne has my camera, clicking away as we rush to beat the raging waters. From the road and over the cruiser’s engine, I can hear the river rumbling. And, it might just rain in a few minutes.

The cameras are about 3 miles (5km) downstream from the Mpala Research Centre offices and campus. Ordinarily, this is a five minute drive but today, it seems like it has taken an hour.

I jump out of the car, take off my boots and almost run into the swirling pool. I am knee deep in the cold water by the time I get to the first battery setup. Only an inch or two of the boxes are above water.  I switch off the electric fence just in time.

Fred is hot on my heels. But, he has forgotten the keys to the boxes!

Mandagor, from the second team, arrives in a Landrover. Fred hops on and they are off to get the keys.

I am standing in the water, somewhat confused, terrified as the whirling waters go above my knees. I cautiously climb up the tower when a twig touches my feet underwater. With all the recent sightings of a Nile crocodile on the cameras, I’d hate to be an easy meal. I quickly climb up the tower.

A third car arrives. David, the ranch manager, is here and in a few seconds, he’s in the water with me. He pulls out a magical tool from his back pocket. It is a penknife, screwdriver, a wrench of sorts, all in one.

“You guys will owe me big time.” He jokes.

We take out the electric fencing batteries.

Fred is back. He is accompanied by Wanjohi from the workshop. I think Wanjohi is the happiest person on Mpala because even with an impending disaster, he has the time to laugh at my worried look and soaked jeans. If the water rises any higher, I will be waist deep in. Wanjohi and David get to work on the transmission box and electricals.

I can feel the sand collecting at the bottom of the tower base. Fred opens the boxes and all the batteries are saved in time. Some water went in but the terminals remained dry.

As David, Fred and Wanjohi undo the transmission box, I regain my composure and take the camera from Anne. I can now get some closer shots in the water. As I do this, my mind goes over the changes I have seen and experienced here over the last year. From a desperate situation at the height of one of the worst droughts in the region in 2017 to unprecedented flooding in 2018.

We salvaged the broadcast equipment in time but unfortunately lost the microphones in fast flowing water and residue mud. Our biggest regret today is that viewers on Explore.org have missed the sights and sounds from the home of African wildlife.

While climate change effects are erratic and unpredictable, two things remain constant for me and the MpalaLive.org team. It takes a village to keep all wheels on the ground and we know that we can count on all teams at Mpala, now and always. 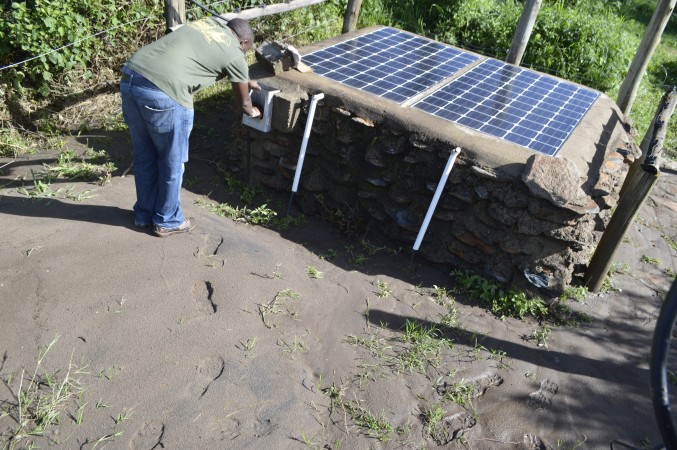 George inspects the after-effects of the flooding

The flooding in the highlands has since reduced but it is still making headlines and wreaking havoc in the Kenyan coast. On Friday, May 18th, we look forward to bringing back all the sights and sounds of Mpalalive.org, the home of African wildlife on Explore.
Peace,