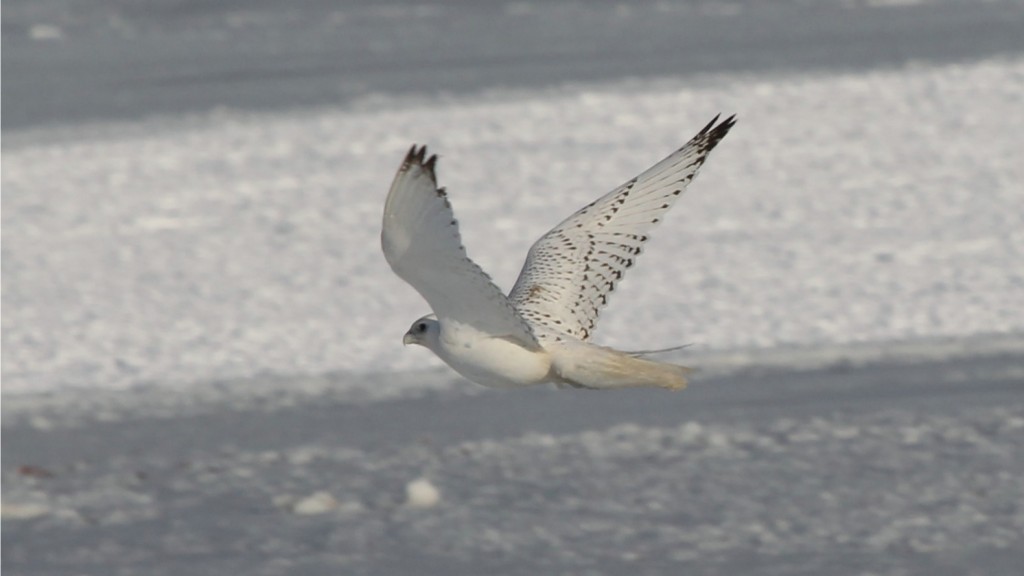 A juvenile male gyrfalcon takes flight on his way to his next meal.

After the Friday night blizzard in Churchill, Manitoba, Saturday’s clear and sunny weather was very welcome for both people and polar bears! However, there was another animal that seemed to appreciate the clear skies- a gyrfalcon!

Several gyrfalcons have been hanging around on the tundra this season and birdwatchers are excited! This bird has a relatively large range across the Arctic but they are not very common; it’s a treat to spot one. Though gyrfalcons are the biggest falcons in the world, the gyrfalcon spotted today was rather small because it was a juvenile and a male (which are smaller than females).

This fellow sat on a rock attentively for about an hour when, all of a sudden, he took off and swung around in a wide arc, capturing a bird and landing on the snow to revel in his meal. Gyrfalcons’ main prey up here is ptarmigan, though we aren’t 100% sure that’s what he caught today since it was a bloody mess before we could get a good look! A couple polar bears in the background were unimpressed and let the bird eat his meal in peace.

Keep staying tuned to the polar bear cams to see polar bears and other cool wildlife!