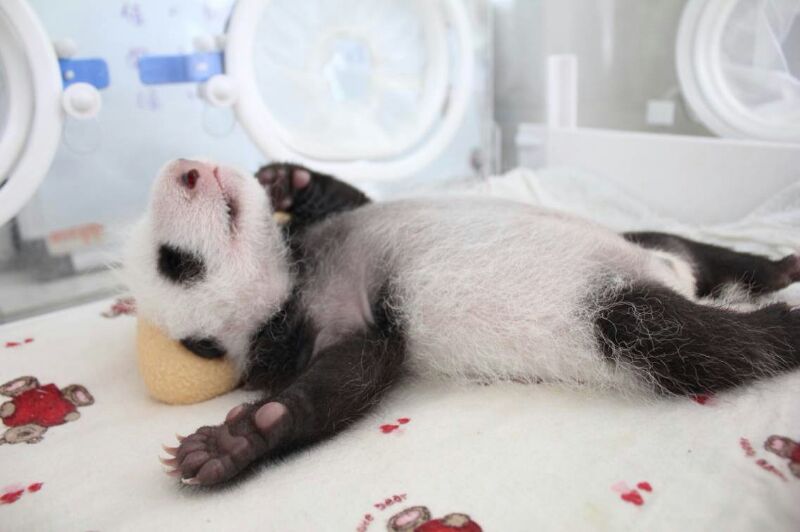 From Conception Through Year 1: Part 2 of 4

It’s birthing season! As we discussed in the first installment of this series, conception can be tricky for Giant Pandas, especially in captivity. In Part 2, we’ll talk more about the newborn panda.

A Cub is Born

July through September is the period of time that pandas generally give birth to their cubs. Since pandas have delayed implantation, the gestation period varies. Typically, they carry their cubs for 3 to 6 months. All panda cubs are born premature and, as such, they are very fragile.

When Panda cubs are born, they are tiny, blind, pink, and have very little hair. On average, they only weigh about 100g (0.2 lbs). To put this into perspective, they are approximately the size of a stick of butter – 1/900th the size of their mothers.
The limbs of a newborn cub are so weak that they are unable to stand. They spend the first two months of their lives eating and sleeping.
The First Month

While pandas are born looking very little like pandas it doesn’t take long for that to change. At about 7 days – some of the typical “panda markings” begin to appear on their ears, around their eyes, and on their shoulders. The baby panda’s whole job is to eat and sleep.

At about a month old more of the black markings appear on the neck and chest, their eye patches darken. They begin to crawl around (it’s more of a scoot than a crawl) and their eyes start to open.

Then it’s a whole new world, which we’ll discuss in Part 3! And in the meantime, stop by and visit the Giant Pandas via live cam.

← Chat with Charlie this Thursday 8/14/14!
Beluga Whales Prefer the Beatles →