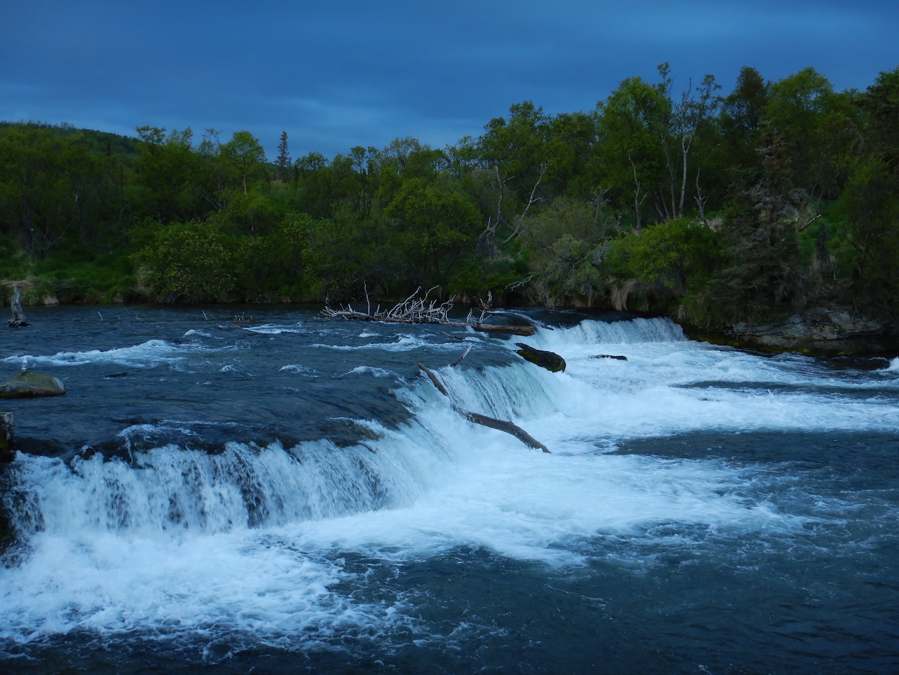 Since returning to Katmai National Park as a #bearcam fellow for explore.org, I’ve visited Brooks Falls repeatedly, mostly to look and listen. Although the waterfall is most famous for its brown bears, few bruins visit it in early June since the salmon have yet to arrive. Standing at the falls from early to mid June, therefore, is an exercise in patience and an opportunity to reflect on the changes soon to come.

With no bears in sight, my attention is free to focus on the larger scene. The sound of the falls is omnipresent, a low roar loud enough to drown out most birds’ song. Looking downstream, where the river disappears from sight, snow-capped Mount Katolinat looms on the horizon. The grass and birch trees are vividly green, a hue attained only in spring. 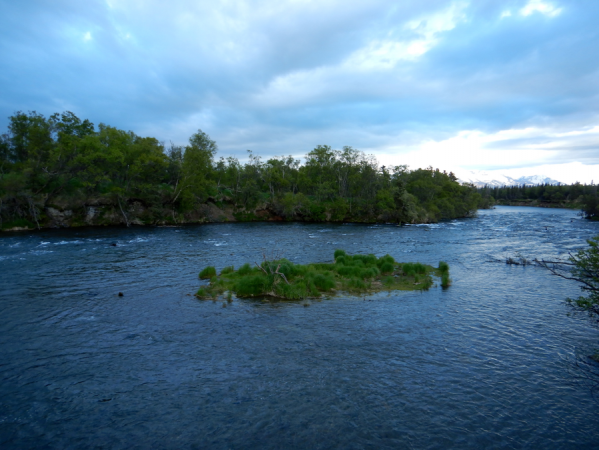 Many dead standing trees succumbed to winter winds and shoreline erosion. Three large trees are poised to wash over the falls and another straddles the falls’ lip about midway across. Along the banks, new sight lines have opened where birches and spruce formerly held their ground. Over the last decade, insect outbreaks including bark beetles have thinned the forest along the river. Erosion, wind, and decay are now toppling many of the standing dead snags.

If I watch the water long enough, I eventually catch a glimpse of a fish or two jumping the falls. Although the sight is frustratingly brief, the size and color of the leaping fish indicates they are rainbow trout, not sockeye salmon. The first wave of Bristol Bay’s famous sockeye may arrive this week, so I keep an eager watch. Any bears in the area are keen to see these fish too, as salmon are the most important component of their diet in central Katmai. In less than a month, Brooks Falls will once again swarm with bears and salmon, creating one of the most iconic scenes in America’s national parks.

Rivers, even small ones like Brooks River, are in constant flux. Across multiple years and seasons, we’ll be able to see Brooks River change significantly, even if it’s only a few down trees at a time. During early June, Brooks Falls projects a sense of quiet and calm, but it is poised to experience tremendous change.