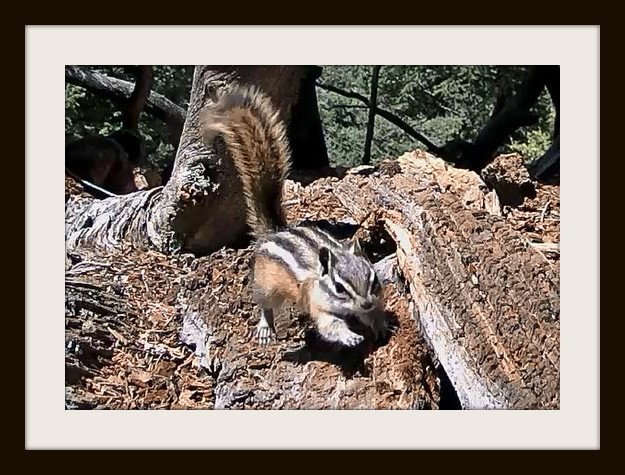 We asked and you delivered! Thanks for the great snapshots from the Chipmunk Log Live Cam. You must have fast trigger fingers to catch them!

Identifying Chipmunks:  The one captured by Homebird in the snapshot above appears to be a Uintah Chipmunk, though it’s mighty similar to the Least Chipmunk. What do you think?

The least chipmunk is the smallest squirrel in the park ranging in length from less than seven inches to nine inches. They can be identified by a gray belly and nape of neck. The most apparent feature is the five stripes on the back and sides of their small bodies. Two of the stripes extend onto the head. Only the chipmunk has stripes on its face. If there are no stripes, it is a golden-mantled ground squirrel. (NPS)

The Uinta Chipmunk has wide and distinct dark brown or black stripes, the Least Chipmunk’s dark stripes are narrow. The Uinta Chipmunk is considered a tree-dwelling species, which means although it spends lots of time on the ground, it nests and seeks refuge from predators in the trees. Uinta Chipmunks nest in the cavities of dead trees or hollow logs and have one litter of 2-5 offspring each spring. (NPS)

What do you think we have here: a Least or Uintah Chipmunk? Post your comments below!

Watch them on the live cam and see if you can catch one!

chipmunk
citizen scientists
colorado
colorado chipmunk
community voices
explore.org
least chipmunk
August 16, 2014
← Getting to Know the Animals of Mpala:
This Is What Serene Looks Like →