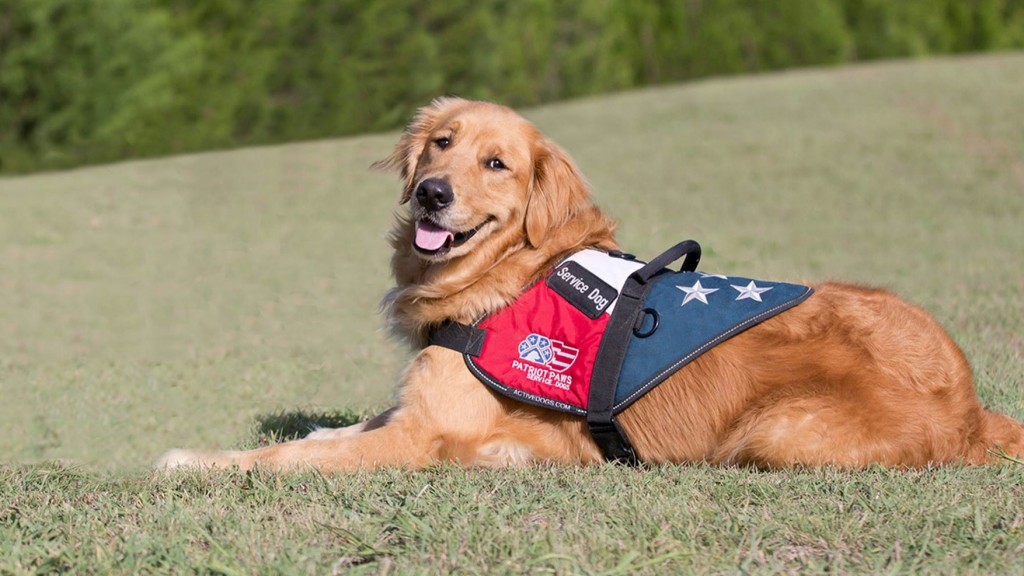 Patriot PAWS trains and provides service dogs to disabled American veterans and others with mobile disabilities and PTS in order to help restore their physical and emotional independence. They wrote to us to tell one of their many success stories working with US Veterans:

Casey was a sergeant in the U.S. Army and served in combat in Iraq.  He has a wife and two young children and a job. Like many veterans who return to civilian life after facing the horrors of war, Casey struggles to reconcile the way his life was then with the way his life is now.  He goes to work every day and has his family waiting for him when he returns home, but instead of feeling safe and secure in the life that he dreamed of coming home to, he became hyper-vigilant, always fearful of danger lurking just out of sight, afraid for himself and for his family.

In Iraq, Casey had lived a soldier’s life…always on guard, very little sleep, never able to relax, always alert for any movement or sound that could indicate danger. He saw others die and knew that he could be next, that in the blink of an eye, he could be gone.  It wasn’t until after returning home that it was discovered that Casey had received a Traumatic Brain Injury, or TBI, while deployed.  He was also diagnosed with severe Post-Traumatic Stress Disorder, or PTS.

As his fearfulness increased, Casey began to withdraw from those around him. He went to work and came home but had very little interaction with his family.  He no longer wanted to play with his children which prompted his 3-year-old daughter to ask if she could have another birthday because Daddy had actually played with her that day. He never wanted to go anywhere or see anyone. Friends stopped calling. He wasn’t sleeping, restlessly staying up at night doing perimeter checks again and again, weapon in hand.

Casey began to spend more and more time alone, locking himself in the bathroom with the lights off or sitting in a dark closet.  His troubled mind was seeking solace in the darkness, and as he realized that he had begun to like that darkness, even prefer it, he knew that he needed help, both for his sake and that of his family.

When Patriot PAWS Service Dogs received Casey’s application, founder Lori Stevens saw nothing unusual about it. It had been her experience in the eight years that she had been training service dogs for disabled/PTS veterans that many, if not most, of those who applied for a service dog suffered from varying degrees of PTS; however, a phone call one day from Casey’s wife, Melanie, prompted Lori to ask to meet them in person. As Melanie and Casey sat across from her at the training center and talked, Lori had a bad feeling about what she was hearing. Casey was on a downhill slide, teetering on the edge of despair. He appeared nervous, fear in his eyes as if he were perceiving danger even there among the friendly staff and dogs.  Statistics flashed through Lori’s mind… 22 U.S. veterans a day lost to suicide.

Standards for service dogs are extremely high, and not every dog who enters the program succeeds. Their average two years of training involves many different people whom the dogs are rotated among, and although attachments form, the dogs must be able to move on and accept training from the next person they’re assigned to. Not every dog can do that, though, and they are lovingly referred to as “Velcro dogs” because they attach and don’t want to let go. Tyndall was a Velcro dog.

The beautiful male yellow Lab was smart and loving but was in danger of washing out of the program because his overwhelming need to bond was derailing his training. Tyndall appeared desperate to find his forever person, and Lori knew just who that should be.
When Casey met Tyndall, the change in him was immediate.  Casey’s face relaxed a little, he seemed a little less nervous, able, at least for the moment, to focus on the big friendly dog that was licking his face in greeting. Casey and Tyndall received one-on-one training from Lori, and as Tyndall bonded with Casey, the service dog in him took over. Casey was his person now, and Tyndall would do everything he could to help him.

And help him he did. Casey is now calmer, more relaxed and able to interact with other people. He and Tyndall play a daily game of hide-and-seek with the children. The family goes to church and out to eat, and Casey himself even suggested a trip to see his in-laws. Melanie says the difference in Casey is like night and day, and although he may never be the same man that he was pre-Army, he is once again able to smile and laugh and be a husband to her and a father to their children. Melanie is no longer afraid to leave Casey alone with the children.

As Casey leaves each morning to go to work, he kisses Melanie goodbye. One morning, after Casey had kissed Melanie, Tyndall jumped up on Melanie and “kissed” her, too. Tyndall now kisses Melanie every morning, just like Casey, as if wishing to follow in Casey’s footsteps. The bond is complete. Tyndall has found his forever person. And those terrible statistics appear to have been altered…at least by one.

dog bless you
dogs
explore.org
patriot paws
ptsd
service dogs
US Army
1,711 March 22, 2015
← Until Next Time, Aurora…
Long Eared Owls are back and closer than ever! →