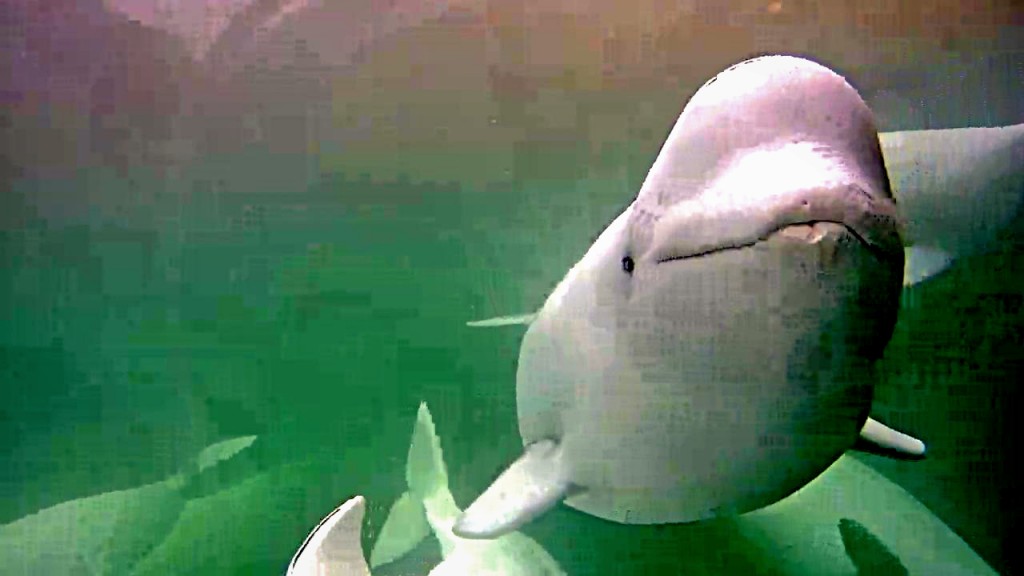 Belugas groove to the music

There are times when words have limitations, especially when one is trying to express their feelings regarding a unique and special experience.

We motored out from the Port of Churchill to situate ourselves just offshore near a few surfacing Belugas. I switched the outboard engine off to drift in the current as we tested equipment. In the distance an occasional Beluga surfaced but I could not see any large pods traveling tight together. As we drifted in the gentle current of the Estuary, Rob, my volunteer for the day, tuned his cello then started to play.

Within minutes a pod arrived, consisting of at least ten Belugas. They surrounded us and circled around our boat, diving beneath us and approaching our underwater camera. And then a mum with a newborn slowly advanced towards our boat. Instead of simply passing by, like they often do, this family pair lingered. I have never witnessed a mum and calf simply drift alongside us, just below the surface, as though they were listening to our music.

The music was a sweet melody, haunting yet delicate, and as I listened and as I observed this curious Beluga pair, I couldn’t help but feel utterly moved by this combination of beauty. The cello filled the cool mid-afternoon air which was shared by a feeding frenzy of Arctic terns. As the shrieked and called, they too joined the symphony of sound that reached the four corners of the estuary.

People from all around the world had their computer volumes turned up. Not only were they witnessing the frequent approach by the Belugas above and below the water on their screens, and the peaceful tunes of the cello, they could hear the Beluga’s song as well. From within their homes dogs howled, children giggled and adults were inspired, all the while this spontaneous Sub Arctic Churchill Estuary concert was taking place across the other side of the planet in real time – how absolutely divine.

Watch a highlight of the open air concert below.