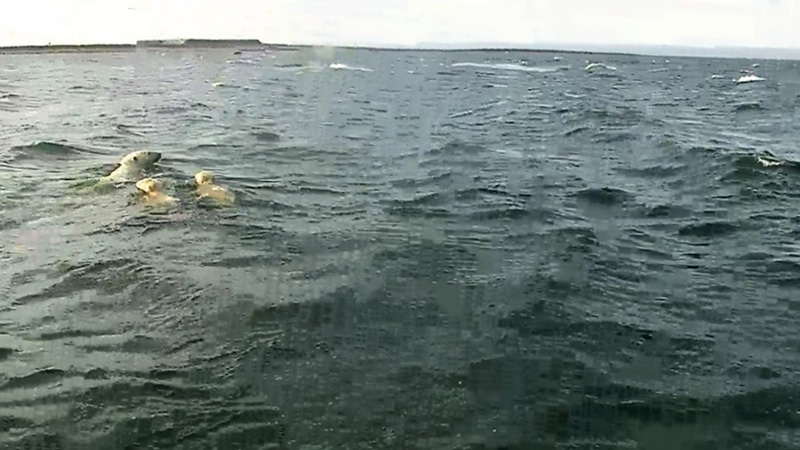 Beluga Boat Captain One Minute, Polar Bear Escort the Next

It was a wild time on the river yesterday, starting rather abruptly before I had even stepped foot on the Beluga Boat. I had launched the boat which was now tied up at the Sea North docks and suddenly I saw, heard and smelt cracker shots only meters away from where I stood.

I was in the middle of explaining to my guest Kristy where she could sit, when we heard the shots. We looked directly at each other and said at the same time “Polar Bear”. Cracker shots are a familiar sound heard often in Churchill at this time of the year and more so in the fall. The shots come from Manitoba Conservation and it means they are using scare tactics to push a bear away from town.

“Let’s go”, I excitedly suggested to Kristy. As we pulled away from the dock and ventured around the corner of the boat launch, three cream-coloured heads were sticking out of the water. A mum and two little cubs were swimming away from shore while two conservation officers continued to let off cracker shots to encourage them to swim to the opposite side of the river. I called out to them asking if I could help. They gave me the thumbs up.

The Marina where I launch the Beluga Boat is very close to town, a zone that is protected by Manitoba Conservation from Polar Bears entering. They protect the bears from the people and the people from the bears. The mum and two cubs were too close to town and needed to be encouraged to cross the river. Conservation use non-lethal deterrents which are like fire crackers without the sparkles.

For over an hour I drove at the lowest speed possible, keeping a safe distance but trailing close enough behind the family to prevent them from turning around. Mum often turned around to keep an eye on her cubs and on us, and on occasion she would swim back the way she came, but only to gather her cubs who had lagged behind. Polar Bears are powerful swimmers. Their front paws are the size of dinner plates and they literally use them as paddles to propel themselves forward in the water. Their hind legs trail behind like rudders which steer them in the direction they want to go.

The river was choppy, a stiff wind blew from the South and waves crested 3 feet high at times. It was certainly more work for the cubs being much smaller than their mother, but they too are born to swim.

Once on the other side they climbed with ease out of the water, shook like dogs and meandered up on the rocks. The cubs started to play as though the swim had taken no effort at all. Kristy, myself and all the Beluga Boat viewers were relieved to see them safely on the far shore, away from the limitations of Churchill town. It was time to get back to watching Belugas.

After watching Belugas for some time as we crossed slowly back towards the port, taking on the odd wave that drenched us as it crested, we were soon alongside Cape Merry. Seconds later, Kristy noticed another bear meandering over the granite rocks. It was s single bear, easily seen as it stood high on the horizon. We called Conservation and reported the bear sighting. Kristy, needing to get back to work, was dropped off and I made my way back to where we had seen the single bear. I suddenly caught a glimpse of what seemed like three objects in the water. They looked like Polar Bear heads. I lifted the underwater camera, raced to shore, only to discover that the mum and her two cubs had arrived back on the town side of the Churchill River. Looking closely at the mothers build and the age and coloration of the cubs, I was 99.9 percent certain it was the same family group. I was astonished at how quickly they got back across the river. What on earth was driving them back over to this side, having already crossed the river twice?

Once again I called Conservation and reported yet another bear sighting, and once again Conservation ushered them back towards the water. They asked if I would escort this family across the river and I did so willingly. During the escort I found out that a Beluga carcass had washed up on shore. By this time the wind had turned to a Northerly therefore any bears on the far side of the river could smell the carcass. No wonder mum undertook three crossings of the river, despite her little ones that were in tow. They were COY’s, Cubs of the year, born this past Christmas, therefore only 8 months old. Mum had one thing on her mind…food, to sustain her and her vulnerable cubs. Later that evening, the Carcass was removed by Conservation.

This is certainly a day I will never forget particularly as it stirred emotions in all of us. I’ve never felt good about stressing out an animal of any kind and I realise that ushering polar bears across the river does add stress to their world. However, in the big picture, it was the best decision for them, and for us. We happen to live in a town built in the wrong place. Over the years we have streamlined how to live cohesively together – Polar Bear and Human. Back in the old days, during the time when military were here, bears were shot on the spot. We have come a long way since then. How we manage the bears (and people) today, creates the opportunity for them to live out their days as Polar Bears in their tundra and ice kingdom.

It certainly was a team effort this day and it felt good to be a part of it, knowing that somewhere out there, a mum and her cubs are meandering freely on the land we all call home.