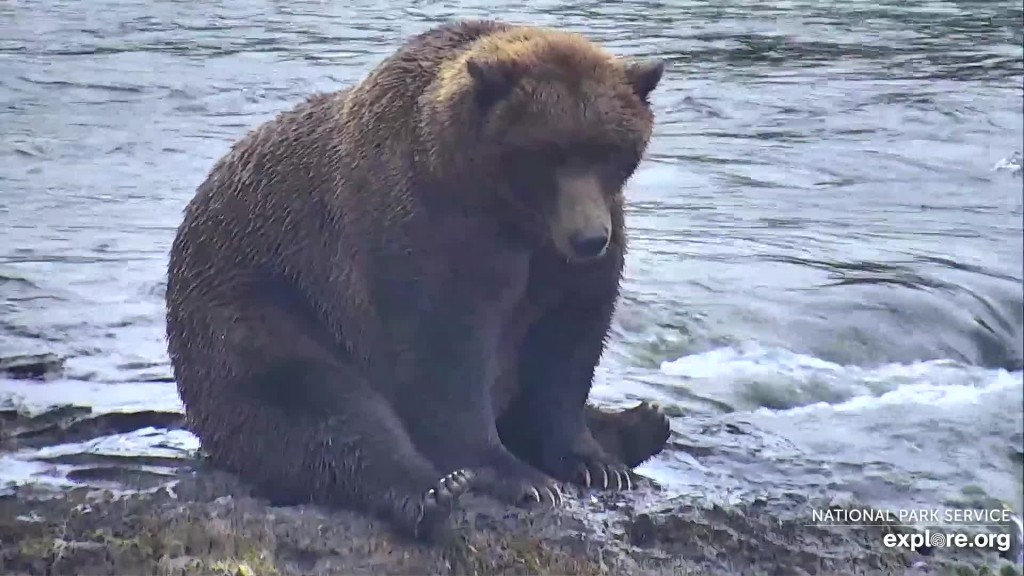 While the Bearcam viewer’s calendar is showing September, most of the Brooks River bears are still off on their August holiday.  Leaving the Brooks area in August to find more productive fishing areas elsewhere, or to feed on ripening berries, is normal but usually there are more bears returning to the river looking for post spawned, dying salmon as an easy meal by this time.  The bears know best, however, so we have to assume they are still able to find plentiful food wherever they are and will return soon. 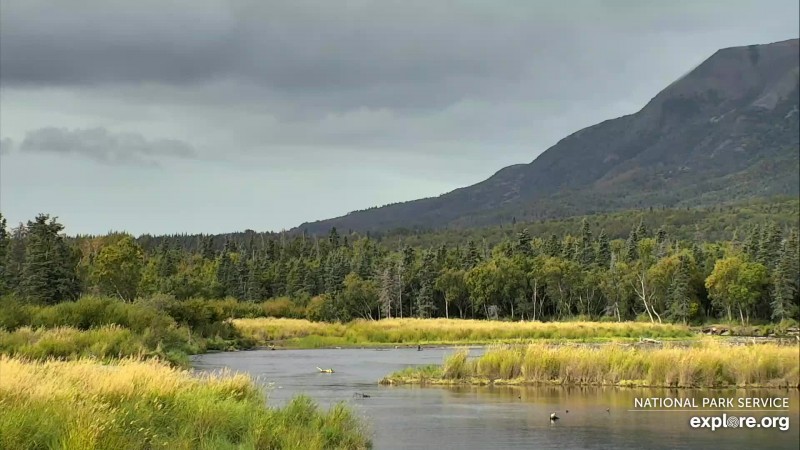 For the bears that have remained or returned, there are some Silver (Coho) Salmon moving through the river and over the falls for them to feed on.  We are also seeing quite a number of Sockeye Salmon in their bright spawning colors on the underwater cam. Mike Fitz offered these comments about the Sockeye still staging near the mouth of Brooks River:

“The salmon we see on the underwater cam are staging, i.e. they are waiting for the right time and water conditions before they move upstream to spawn. They are also fish that arrived during the main sockeye migration period (late June and July), but they were likely spawned in the lower half of Brooks River and don’t feel the urge to spawn upstream of the falls. Once the water temperature is right, they’ll move upstream a few at a time over the next few weeks and spawn in the lower half of the river.

“The delay in spawning is normal for Brooks River (which is good for bears because it creates two seasons when they can fish for salmon–the migration in early summer and the spawning period in late summer and fall). But the delay in spawning timing is not restricted to Brooks River. It seems to be common for salmon who spawn in lake outlets, presumably because they are waiting for the water temperature of the outlet stream to drop.” 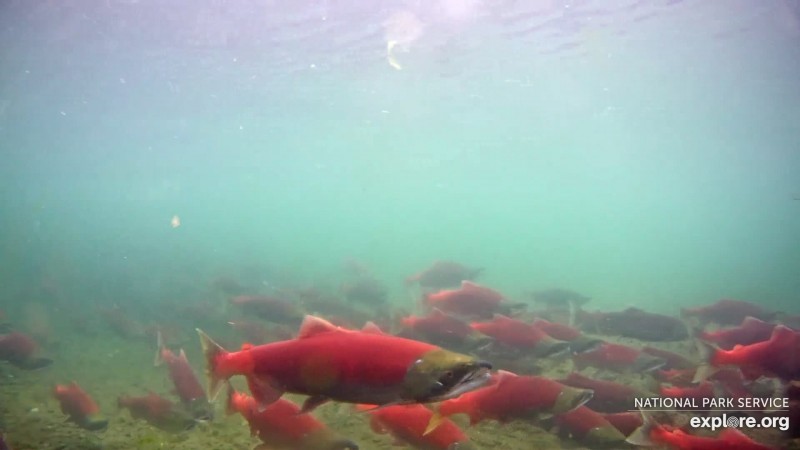 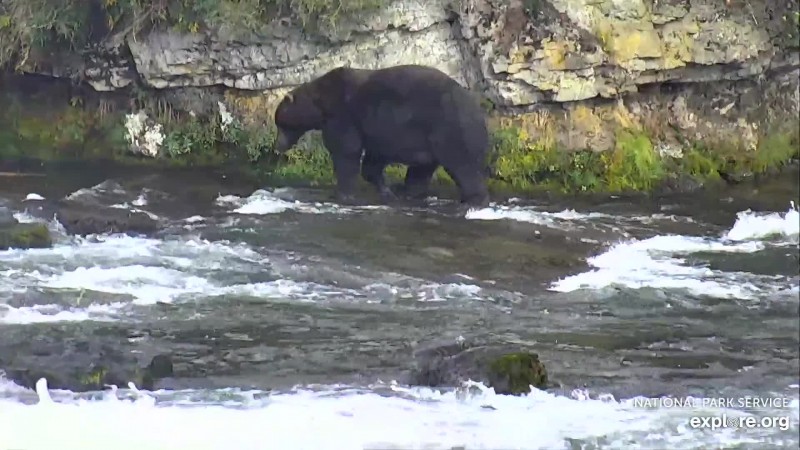 68 heading to the office Snapshot by Bookmom

There is some tension visible between 68 and both 747 and (especially) 856, but so far it has resulted only in some posturing, before they resume the business of eating. 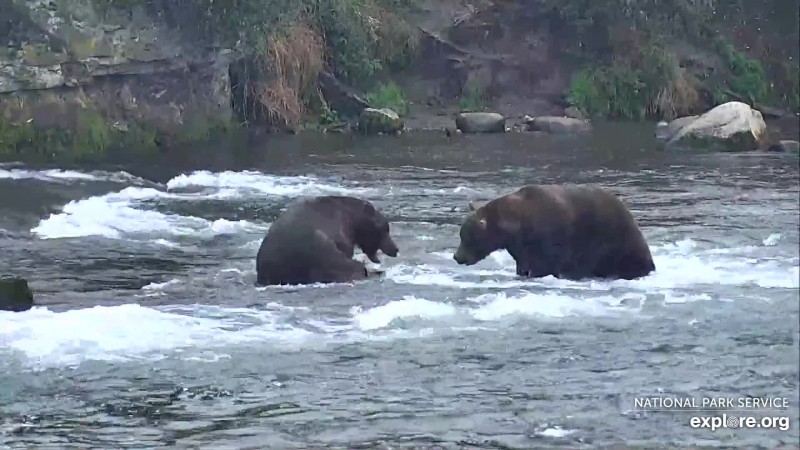 856 and 68 have words Snapshot by tzrule

747 has been giving lessons in how to get fat(er).  His girth is pretty amazing.  He struggles to climb the steep path on the far side of the falls where he’s taken to climbing the right side of the bank which maybe less steep. Even backing up seems to be a challenge! (I think I heard beeping!) please see the highlight in the video linked at the top. 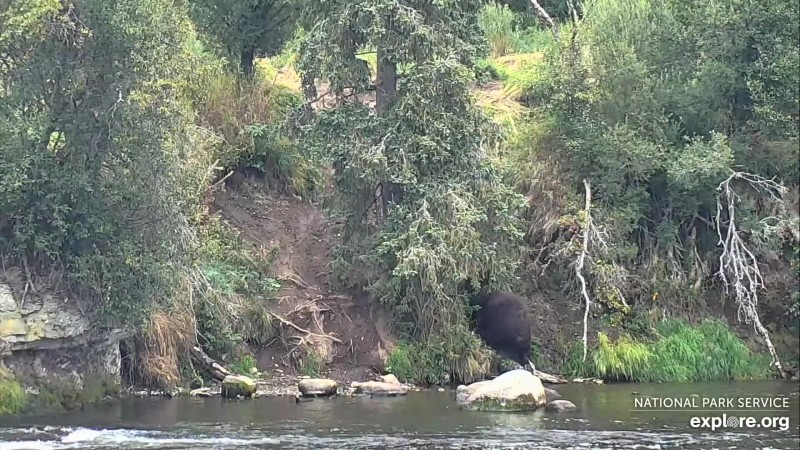 747 struggles to climb the far bank Snapshot by Phillydude

It’s surprising to realize that he is still pretty agile when he has a disagreement with another bear.  In the skirmish between 747 and 755 Scare D Bear, we saw 747 quite easily rise up to swat at 755. 755 got in some swats of his own and the altercation was over quickly. 128 Grazer was seen again this week after returning in late August only to leave the river again. She crossed the falls and was approached from below by 747. She then was hop charged by 856 when she entered the far pool. Here is proof on how fast 747 can still move 😉

The subadults have been able to get a lot of practice fishing while the adult bears are mostly absent. 909 who is quite the prolific lip fisher took to the jacuzzi this past week and was able to catch quite a large salmon. 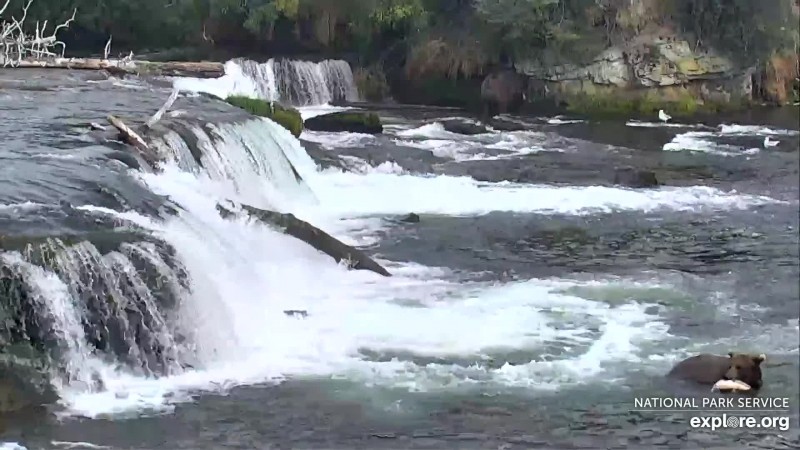 909 makes a catch in the J Snapshot by BarbaraHoran

They are most entertaining to the viewers, though, when they are playing. 812 and 821 had quite a playfight this week. 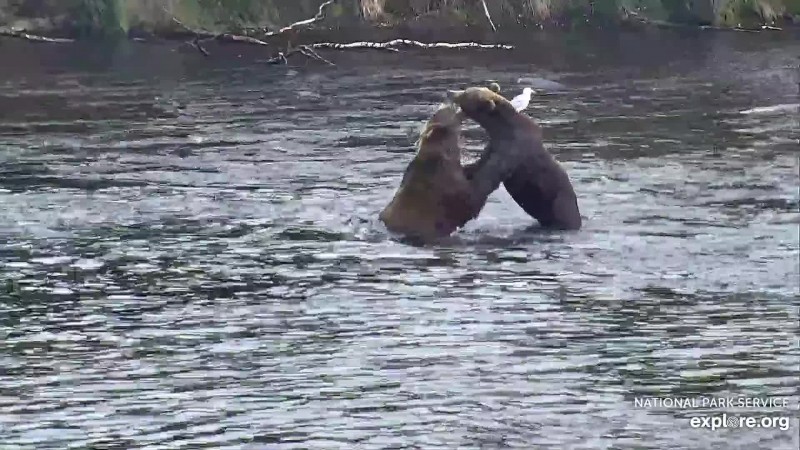 Other sub adults played in the riffles area. 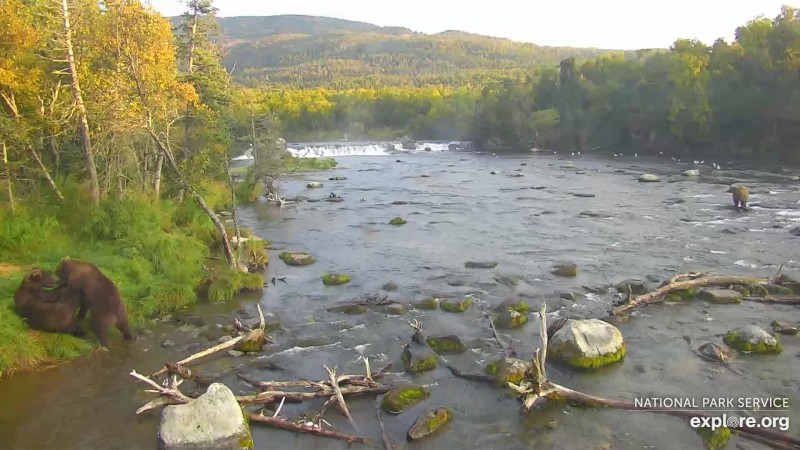 subadults playing in the riffles Snapshot by Carlee

Even the fish offer an opportunity for what looks like some enjoyment for the sub adults as this one proved by whipping his salmon around. See this in the highlight video linked at the top 🙂

One unknown subadult has cause quite the discussion for bearcam viewers with his fearless approach toward the large male bears at the falls. He successfully grabbed some scraps from behind 68 in the far pool. He came back later and attempted to grab some more from a still eating 856, who dropped the salmon he was eating and chased the subadult out of the far pool. 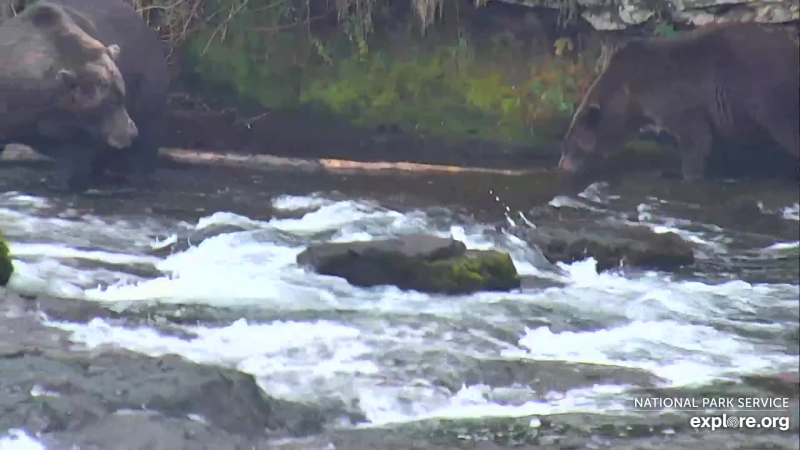 The next day he was seen approaching a sleeping 68, maybe to see if 68 was laying on some scraps? 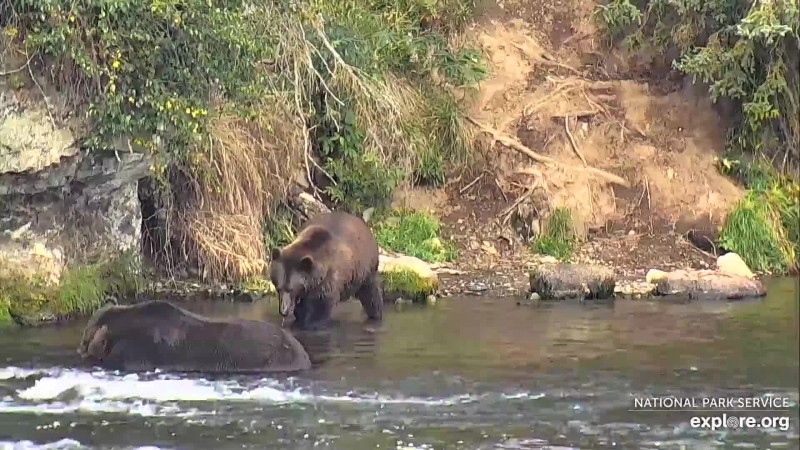 subadult sneaks up on sleeping 68 Snapshot by Bookmom

The subadult then decided to press his luck and approached an eating 747, again attempting to grab some discarded scraps. 747 proved again that although he is large he’s still pretty agile, as he jumped up and chased the subadult. We’ve enjoyed watching the antics of the Common Mergansers diving for fish and scurrying around the river.  Here’s a post from Mike Fitz with some information about them:

“Besides the conspicuously white glaucous-winged and mew gulls, the most common birds we see on the falls cam are common mergansers (Mergus merganser). At this time of the year, they can be identified by their brown-gray bodies, long thin bills, and white “chin” feathers.

“Most of the mergansers we see now are females and juveniles. In spring and early summer, you’ll also see males, which are far more conspicuous with bright white breast feathers and dark green heads.

“These are diving ducks that feed on small fish such as trout, lampreys, and salmon smolt. They are perhaps the only duck that nests in tree cavities in Katmai.” Just how important is an individual animal? How might the famous bearcam bears influence conservation efforts? Mike Fitz talks about this survey here