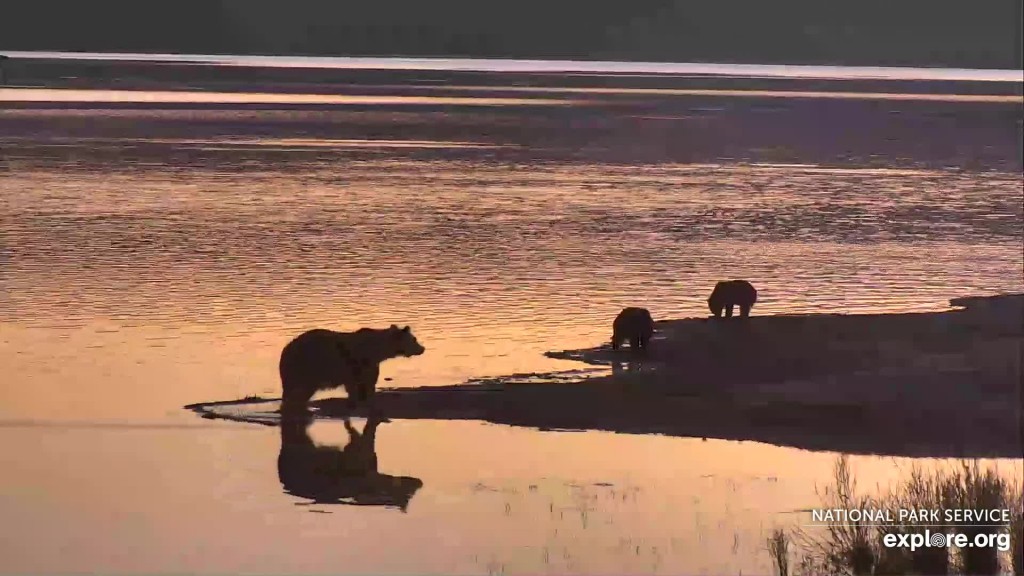 719 and coy at sunrise Snapshot by Jen

This week finally saw the return to Brooks River of quite a few bears.  Katmai Conservancy Ranger Naomi made this observation on their later return:

“An observation and food for thought. The bears have been very late in returning to Brooks River this September. Reports from Margot Creek were that upwards of 20 bears were seen there. So many are returning to Brooks this week. We got reports from visitors to Margot last week that all the salmon had been eaten and only bones remained. Another demonstration that the salmon are why the bears are here.”

We started off with a gorgeous view of the Harvest Moon over the river late last week. 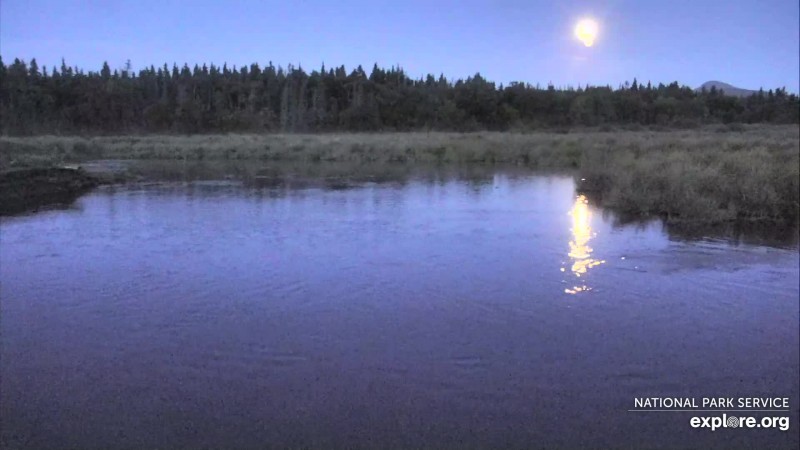 719 and her two COY gave us many great views of them this week.  We got close ups of them at the Falls, on the trail near the fish ladder where they sat cuddled together and waited as 719 went fishing. 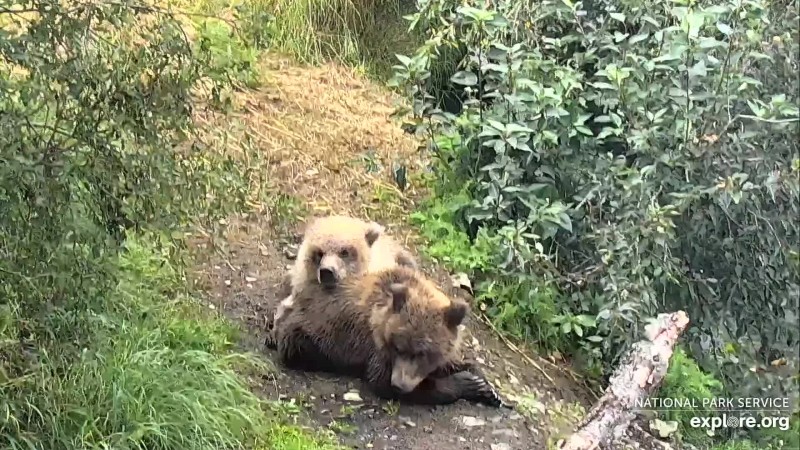 One of 719’s cubs grabbed its own fish out of the riffles!

In a family moment, 719 and cubs were on the spit while 435 Holly (who would be their “grandma”) fished in the background. 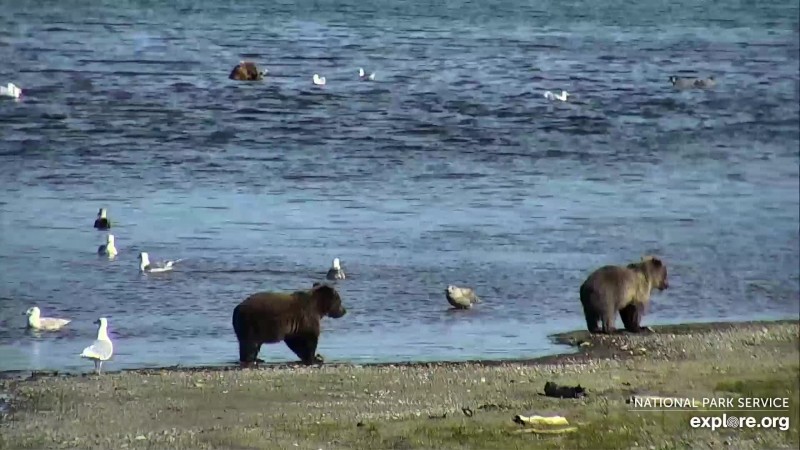 171 and her cub returned to view out on the spit this week. 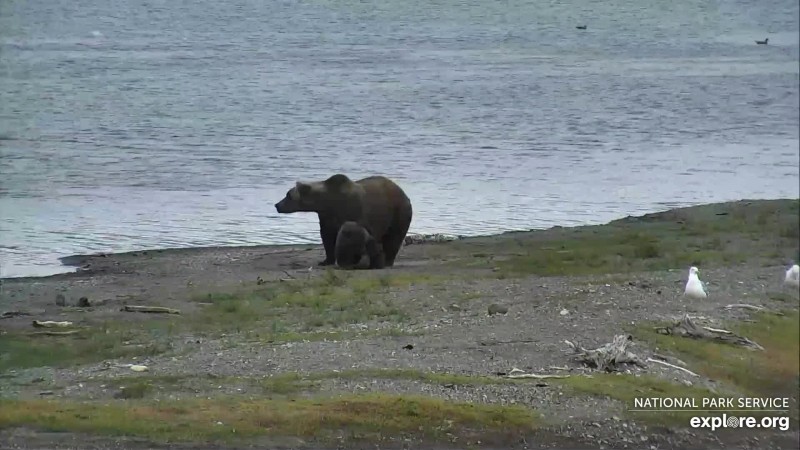 171 and coy on the spit Snapshot by CamOp Ele

171 and her cub met 708 and her two cubs on the closed trail.  The cubs were very curious about each other, but a little unsure.  They did some mini bluff charging at each other. 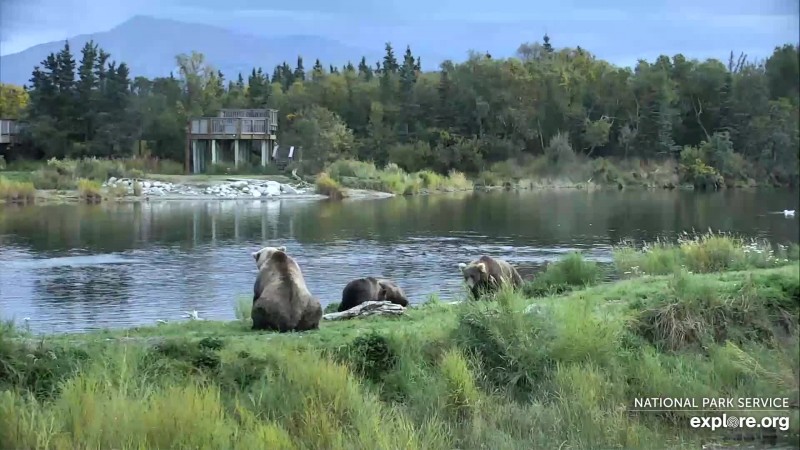 273 and her cubs returned and were seen in the Lower River. 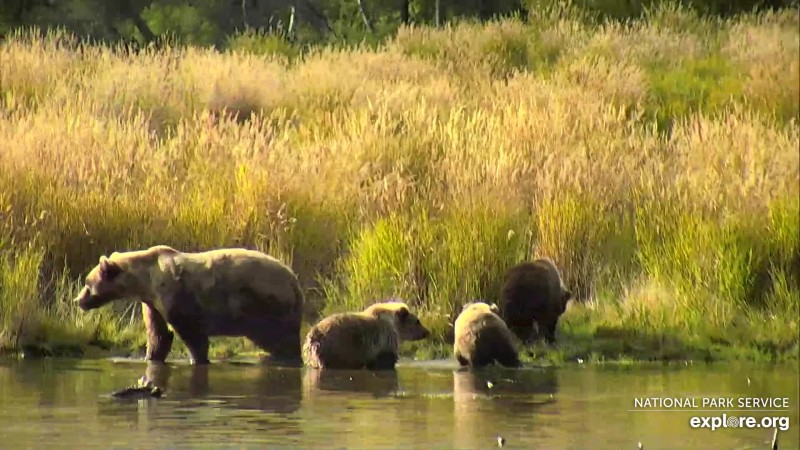 273 and coy seen on the lower river Snapshot by BarbaraHoran

273’s cubs, along with a number of gulls, appear to all have been startled by something in this gif.  🙂 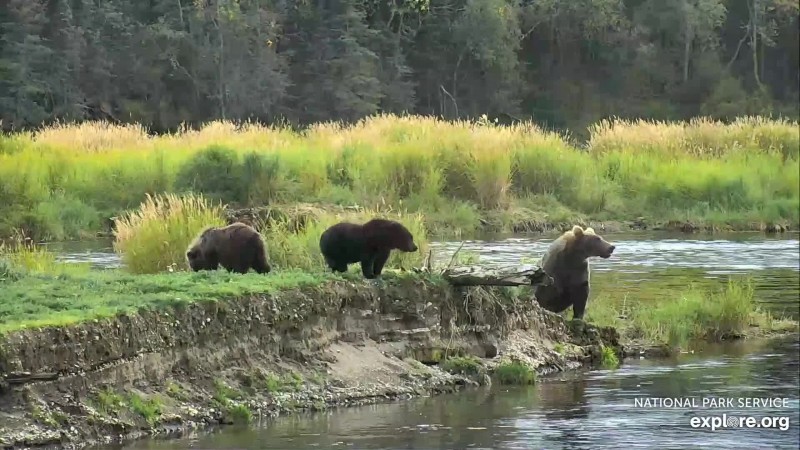 708 Amelia and coy Snapshot by Bookmom

We saw 708, in a moment any Mom can totally understand, laying flat on her back on the spit while her cubs continued to frolic and play. 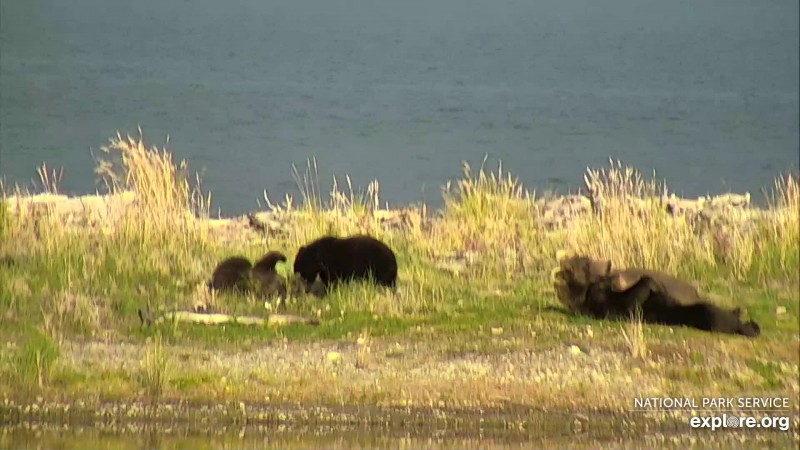 708 Amelia sunbathes while her coy play Snapshot by merry_mermaid

402 and her cubs spent time at the falls after their return. 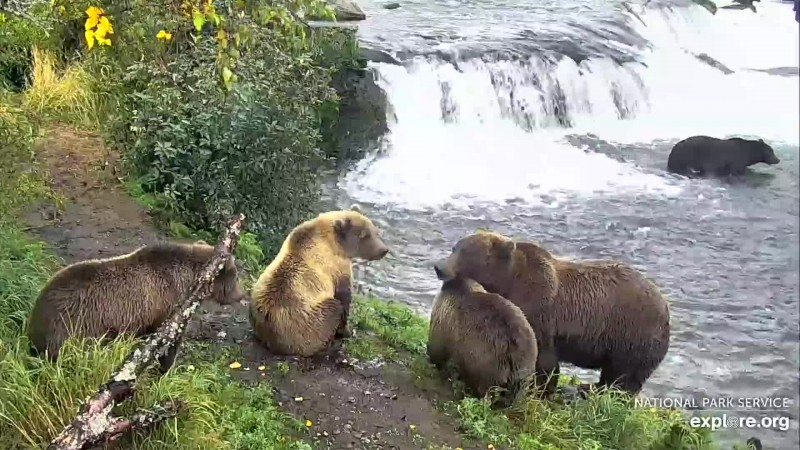 402 and her yearlings Snapshot by BearBell

402’s cubs gave us some really nice cam views on the trail near the fish ladder at the falls. 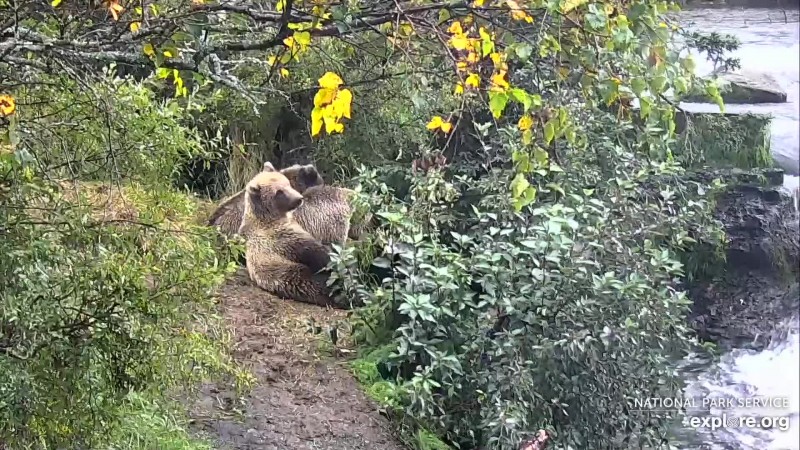 94 and her yearlings appeared on the spit after their 10 week absence from Brooks River. 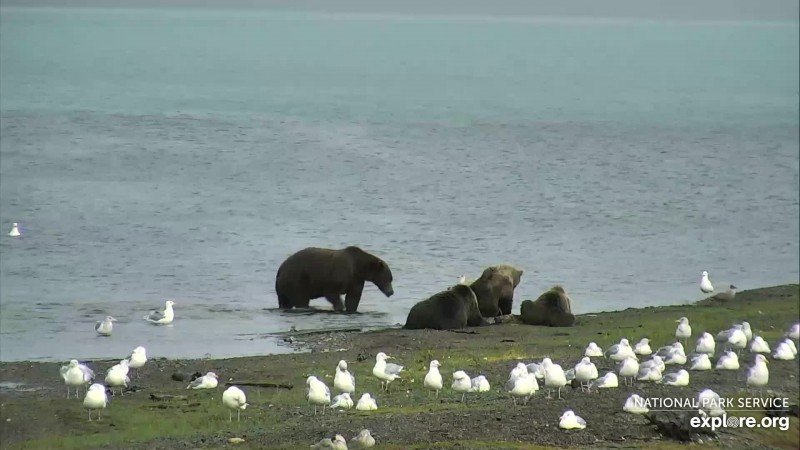 94 and yearlings on the spit Snapshot by SusyQ

We got some better views of them resting in the grass the next day. 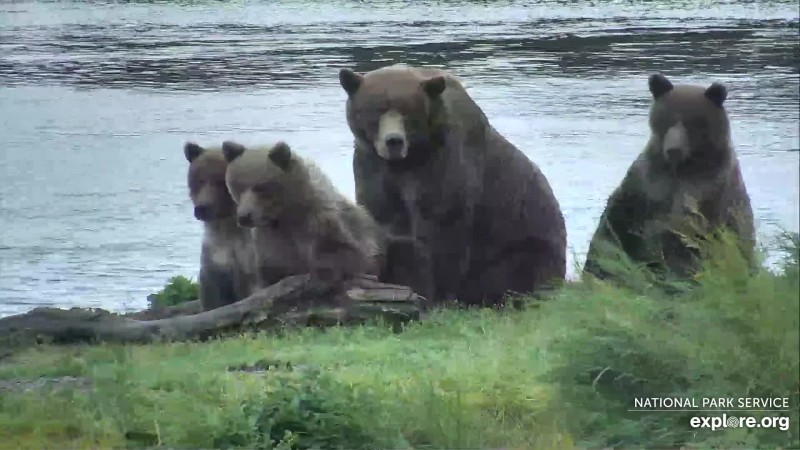 94 and yearlings on the closed trail Snapshot by Homebird

Not to be out done by all the Moms and cubs in view, the sub adults continued to eat and play (and play, and play) in groups along the Lower River.  Our favorite views of them this week involved one or more of them on their backs in the river with feet in the air as seen here.

480 Otis made his way back to the river this week.  Like a lot of the bears, he returned later than in previous years. He sort of snuck in on the Lower River and many viewers didn’t realize who they were watching right away.  😉 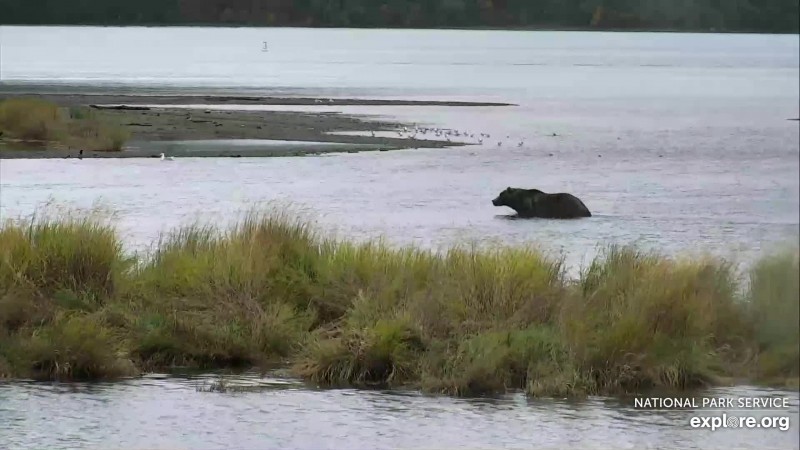 480 Otis sneaking in on the lower river Snapshot by corrwest

Later Otis made his way upriver and spent time at the falls.  He has since split his time between fishing (and sleeping) in the Lower River, and fishing at the riffles and falls area. 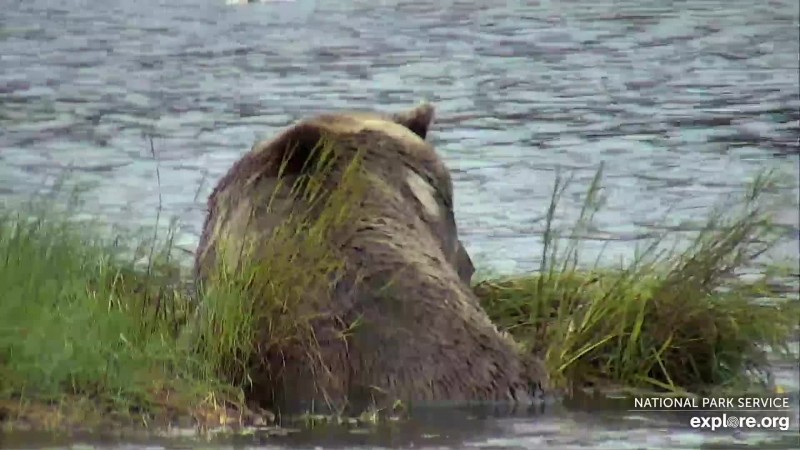 480 Otis napping on the lower river Snapshot by CamOp Arya

480 Otis was also seen at the falls getting 503 discards. Many viewers enjoyed this moment. Mike Fitz had this to say about similar moments he’s witnessed:

“From what I’ve seen in the past, it’s not uncommon for some bears display a high tolerance for other bears, especially when they are well fed. Based on the time I’ve spent watching bears at the river though, I would hesitate to say that 503 was sharing his fish. It’s more likely that he was just tolerating Otis and Otis was able to capitalize on 503’s tolerance by being in a good position to scavenge any leftovers that drifted his way.” 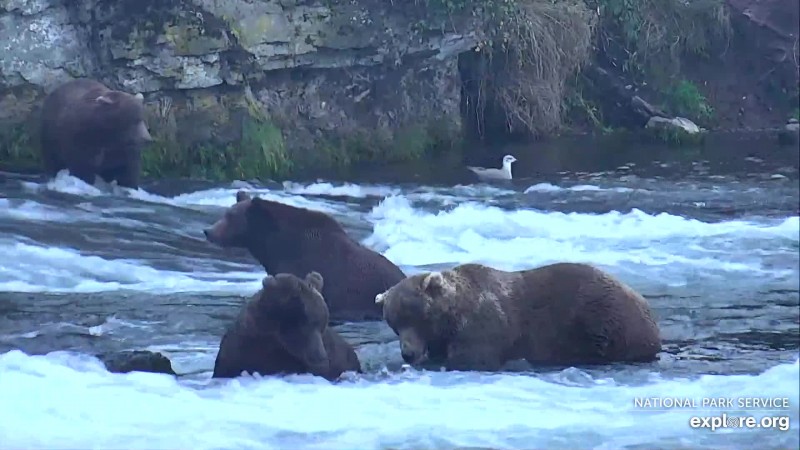 480 Otis getting scraps behind 503 Snapshot by Shel_

Male 879, who has an aversion to passing under the bridge, continued to try to find a way around it this week.  He has been seen fishing in the river so we know he has been successful in either circumventing the bridge/walkway, or going under it somewhere. Explore did a gorgeous video of 879 snorkeling at sunset viewable here. 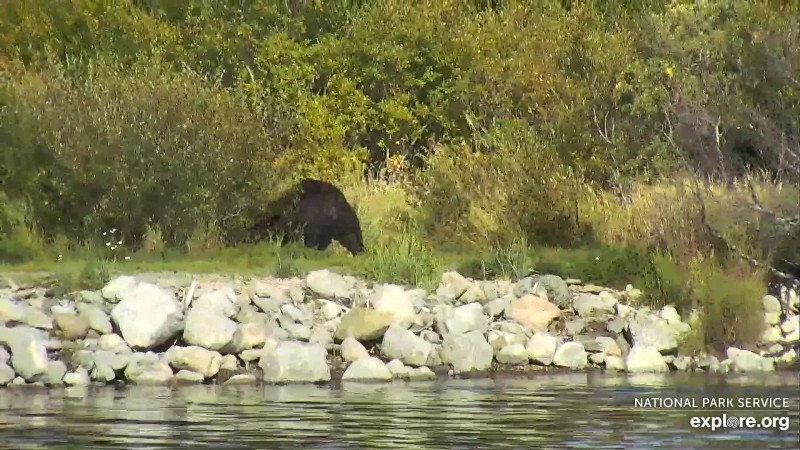 Bear 474 returned to the river this week.  He’s not as well known to viewers and sometimes is confused for other bears.  Look for him at the falls, near a large boulder on the far side, where he usually sits with his back to the falls to wait for fish. 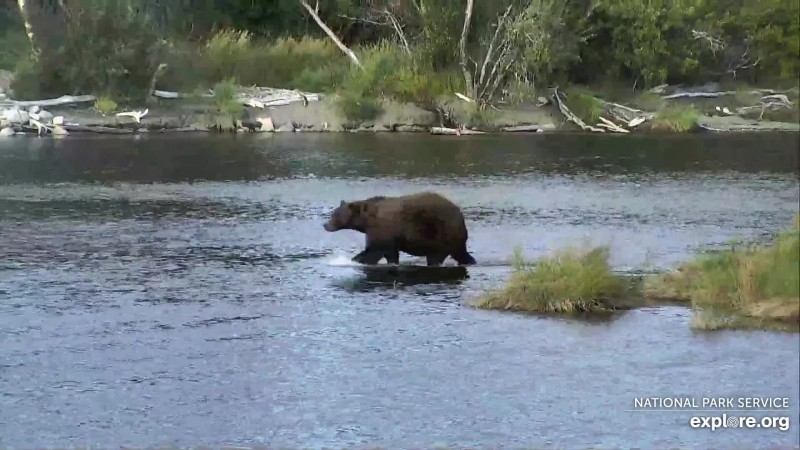 We continued to see bears fishing the falls including the lip of the falls.  Mike Fitz said this about fish jumping the falls this late in the season:

“I am a little surprised that fish continue to jump the falls at a rate great enough that bears fishing the lip are still finding success. Although biologists don’t fully understand the drivers of hibernation in brown bears, it’s probably a variety of things. Food is certainly one of them. There seems to be evidence that food availability is negatively correlated with den entry. In other words, some bears will delay denning if food remains available. Just because there are more salmon now, however, doesn’t mean that salmon will remain available any longer than normal. Salmon time their spawning to ensure their eggs incubate at the correct rate and hatch at the right time in late winter and spring. Therefore, the peak of the spawning in Brooks River is probably still going to be occurring in September and salmon availability will still dwindle quickly in October.” 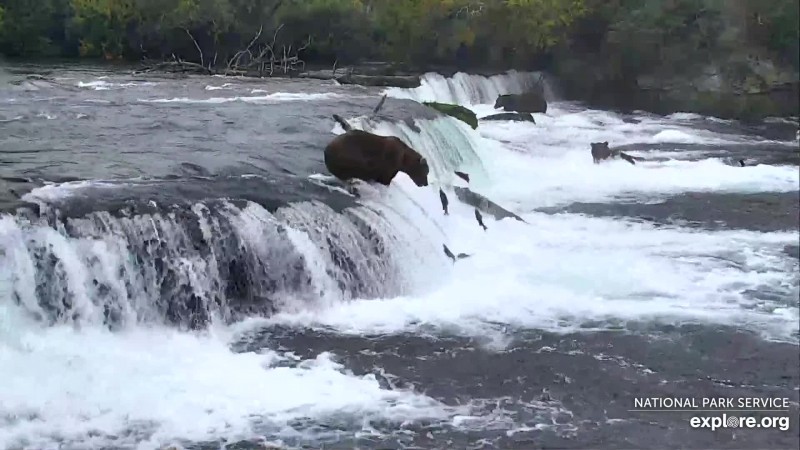 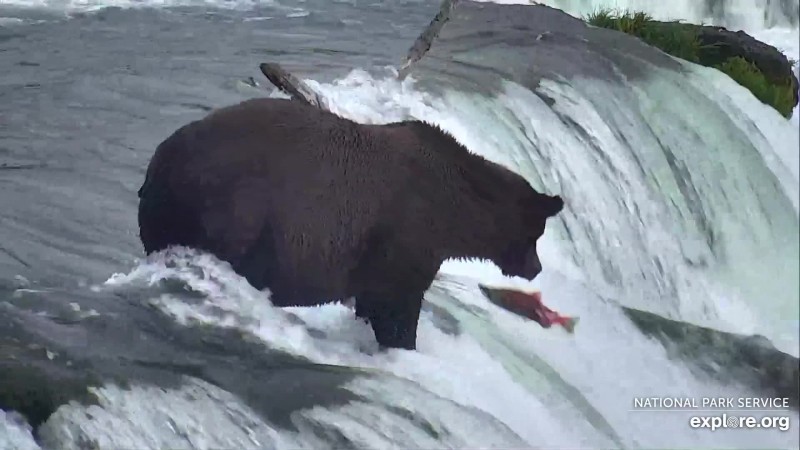 151 Walker had a conflict with a sub adult over fishing on the lip of the falls.  151 came towards the sub adult until it had nowhere left to back up and slipped off the edge of the falls. 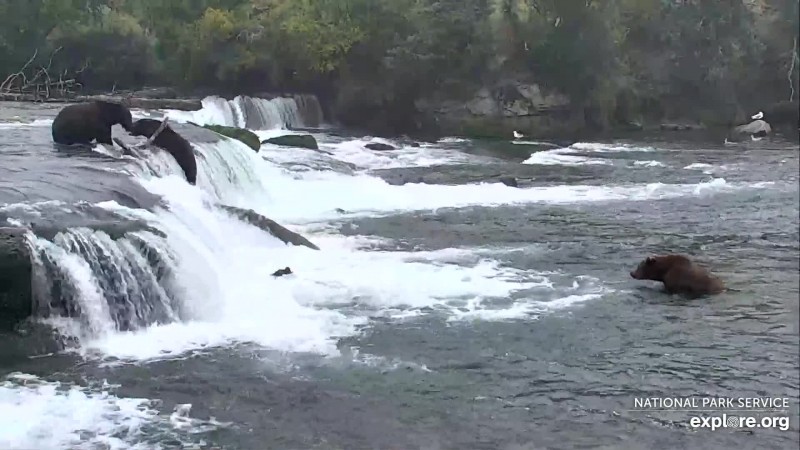 subadult chased off the lip by 151 Walker Snapshot by LaniH

151 Walker attempted to push subadult bear 909 off the lip. But the gutsy little sub gave 151’s nose a few swats, kept her place on the lip and was able to have 151 back off. 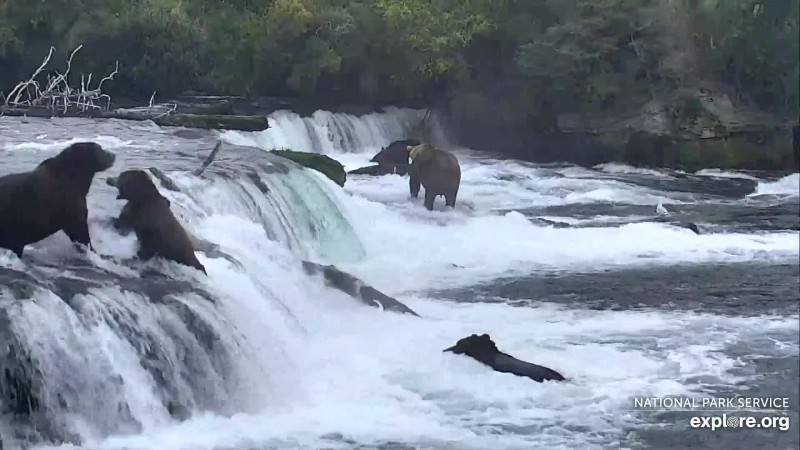 909 defends the lip from 151 Walker Snapshot by jegrabau

Adults 503 and 68 had a play-fight session near the falls seen both from the falls cam and the riffles cam.  This was entertaining and a little surprising. While 503 is a young adult bear known for his playfulness, 68 is a mature adult who fought this season with 747, the second most dominant bear (at the time) at Brooks River.  So seeing him still be willing to play was rather unusual for cam viewers. 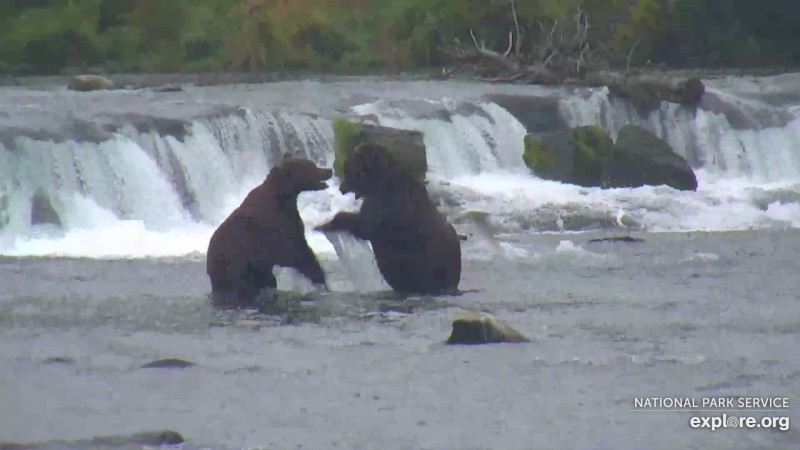 89 Backpack was seen back at Brooks Falls late Wednesday evening. 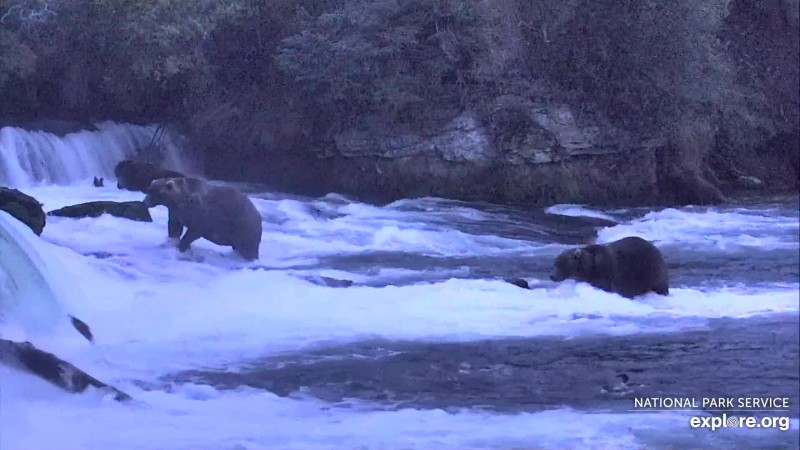 A couple great views of Bald Eagles were caught on the cams this week.  This one posed on a tree root. 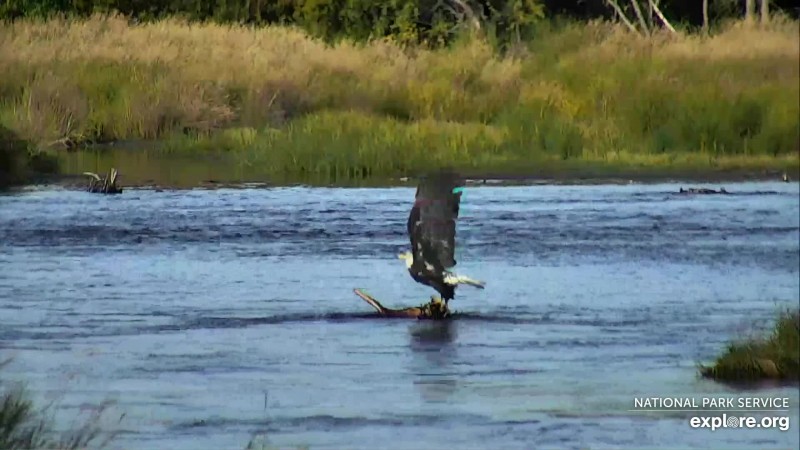 An immature Bald Eagle was seen dragging his fish catch out of the river onto the spit.

On Thursday evening, a large bear was seen in the Lower River.  We’re looking hard at him for a positive ID.  We see his short left ear, and another view showed us a scar on his right hip.  We think this could be 775 Lefty.  What do you think?  Is it Lefty?  Or another bear in the growing group of bears who are members of the “short eared club”?  Leave us a comment below the blog with your thoughts. 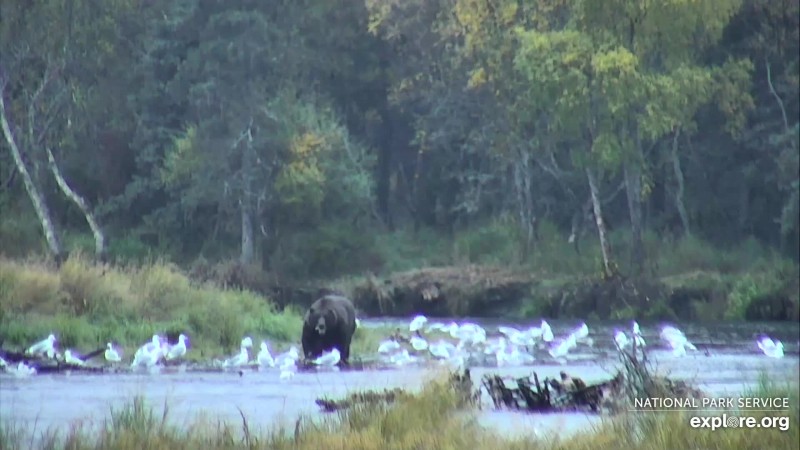 Is this 775 Lefty Snapshot by Larinor 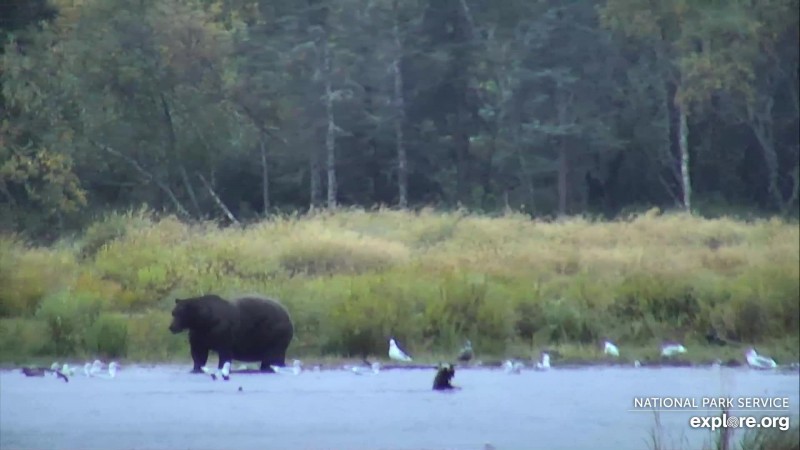