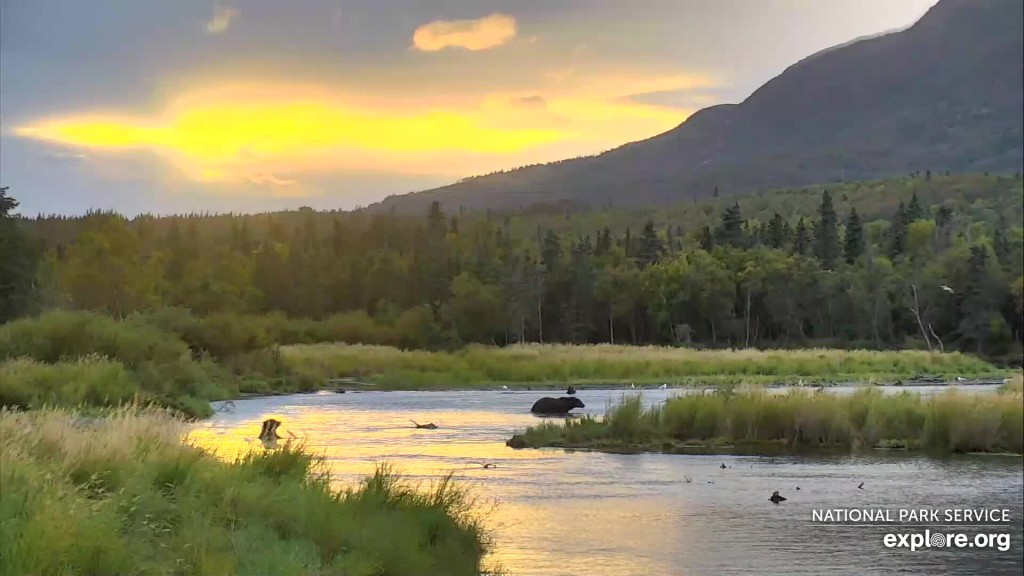 Sunset and bears Snapshot by Bookmom

The bears are back at Brooks….the bears are back at Brooks….   Well, okay, not all the bears, but since our last blog we have finally seen a bear or two arriving almost every day for their fall feeding on the dead and dying salmon!  After a couple of weeks of wondering if/when they would begin to come back, it’s been exciting to see some familiar faces along with their unfamiliar, much fatter bodies.  Here’s a run down of who turned up this week in order of appearance:

151 Walker turned up just after we published last week. 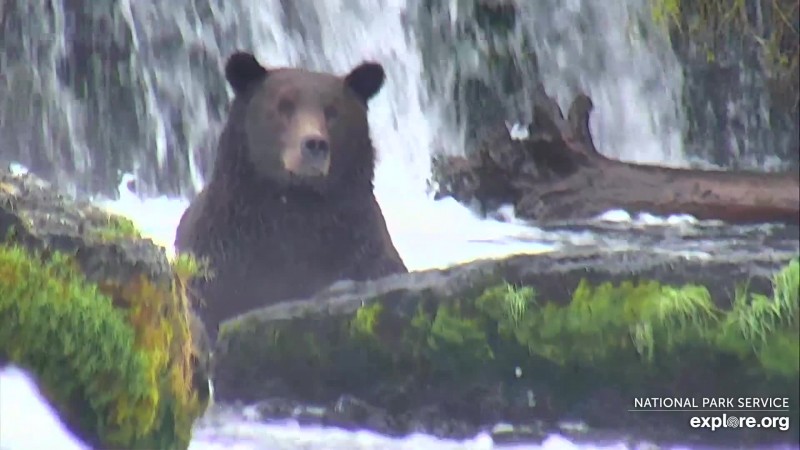 151 Walker in the far pool Snapshot by CarolineB

As one of the smaller adult male bears, 151 Walker has found himself being pushed around by some of the larger, older and more dominant males.  Bear 68 chased him off a couple times from a spot in the far pool where both of them like to sit and fish. 747 also moved 151 Walker out. 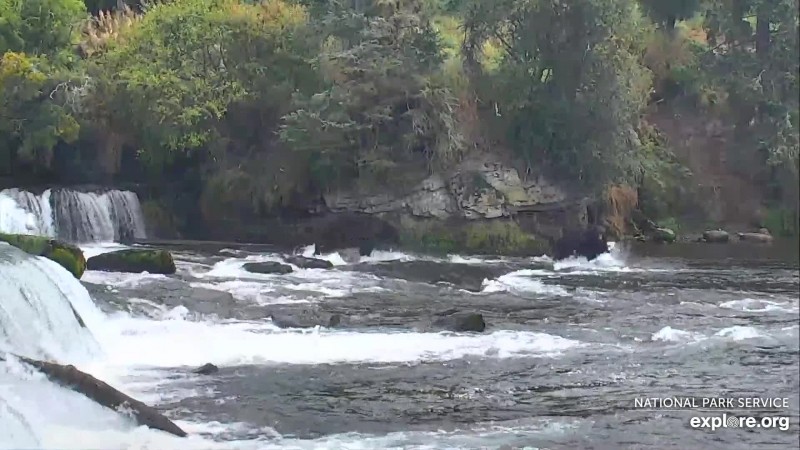 151 Walker was able to assert his dominance over subadult 812 at least twice this week.  812 has been spending a lot of time fishing the lip during August and now that 151 Walker has returned he wants to use that spot.  812 is not easily intimidated though and returns to fish any chance he gets. 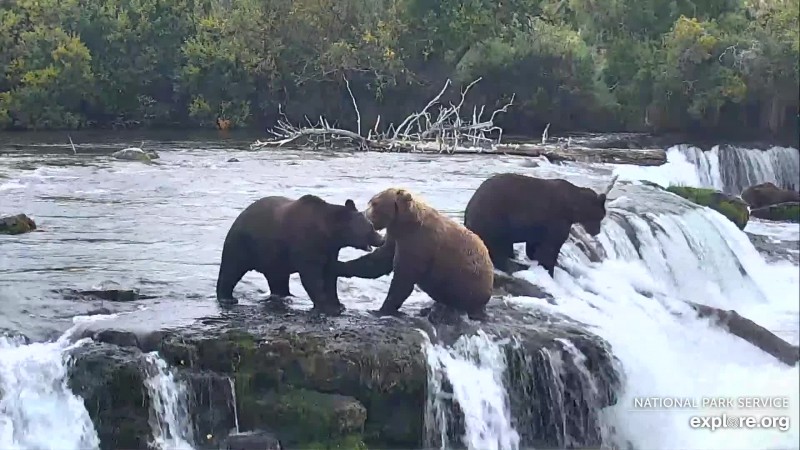 Our young mother bear 719 returned with her two cute, chubby COY (cubs of the year or spring cubs).  They are looking great. The cubs new coats are different colors now with one being much lighter than the other.  It’ll be easy to tell them apart. They entertained us in the Lower River for quite a while. 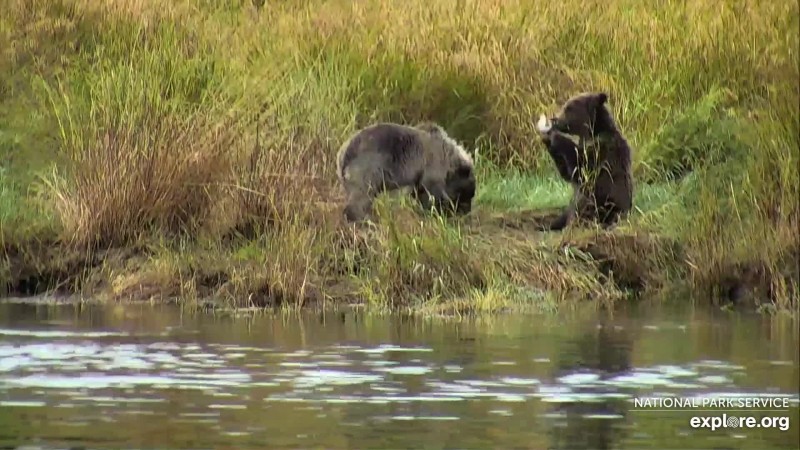 719’s coy eating on the riverbank Snapshot by tzusrule

719 and cubs also appeared in the Riffles and at the Falls. 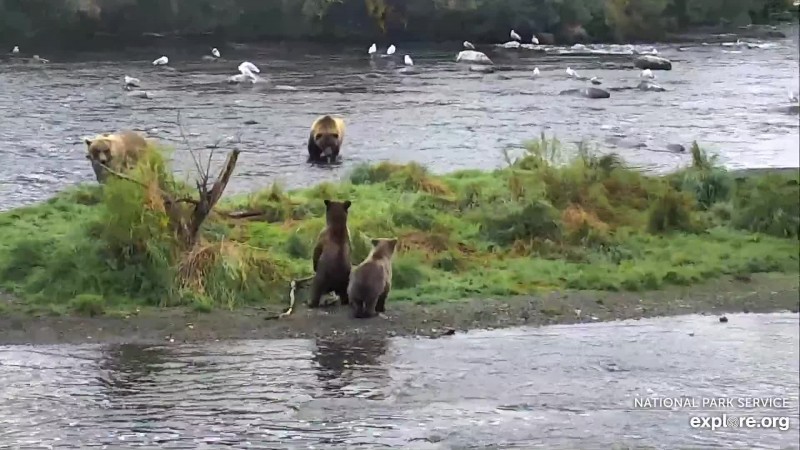 719 and coy at the falls Snapshot by YvetteLane

Next to put in an appearance was 32 Chunk.  Wherever he went to fish, it looks like the fish were plentiful.  Chunk’s shape certainly lives up to his name! He appears to be seeking a spot in the Fat Bear Contest brackets. 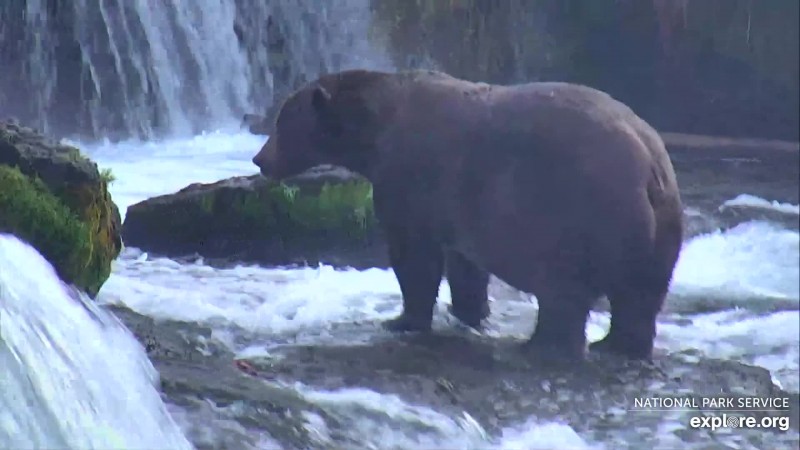 Being a bear that is fairly high in the hierarchy, Chunk’s appearance made the already tense atmosphere between 856, 747 and 68 a little more tense.  68 and 32 Chunk wasted no time before getting into a short altercation. 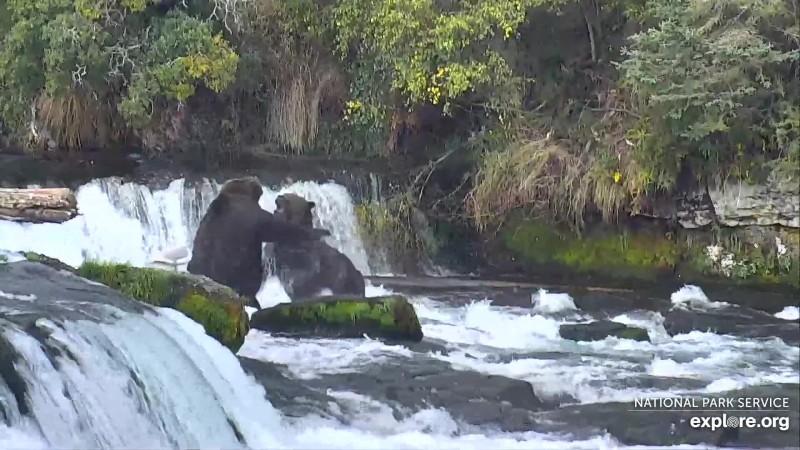 Adding to the large male bear count at the falls, 879 arrived.  879 is normally only seen in the fall. He’s known to viewers for his large size and long neck giving him a horse-like appearance at a distance, his dark coat, and his very tall ears.  It looks like he might be known for just one very tall ear now, though, as one of his ears appears to be drooping or bent down. He now joins 480 Otis, 755 Scare D Bear, and 775 Lefty in the bent ear club. 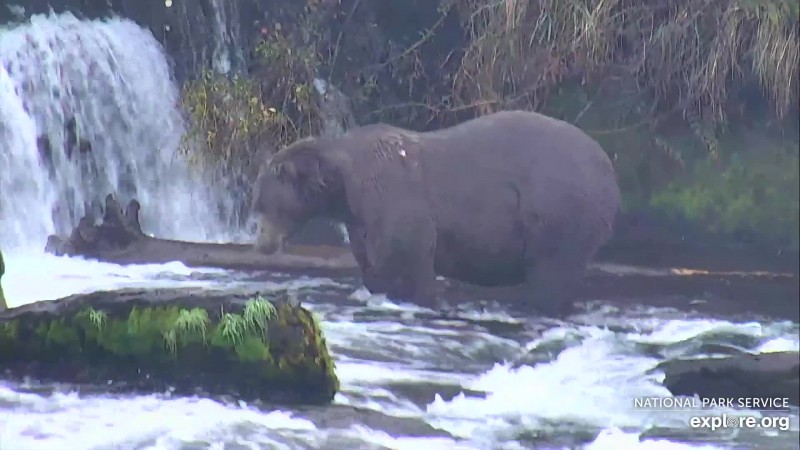 879 in the office Snapshot by Phillydude

Another thing that 879 was well known for was his refusal to swim under the old floating bridge in the Lower River.  He would always swim up to it, leave the water, walk around it and then return to the water. We were curious how he would react to the new elevated bridge and we got our answer.  He seems to have an aversion to it as well. After swimming up to it, he swam away. He checked it out on land, possibly looking for a way to get around it. Eventually, he literally ran under it.  So far, cams have only caught him near the bridge once. We’ll be watching to see if he is able to adjust and move under the bridge more comfortably.

Probably the most anticipated bear to come back this week was 503.  He’s a fan favorite and we were all happy to see him return. He’s been fishing in the Jacuzzi and on the lip since his return.  He looks like he’s grown even taller while he was away. 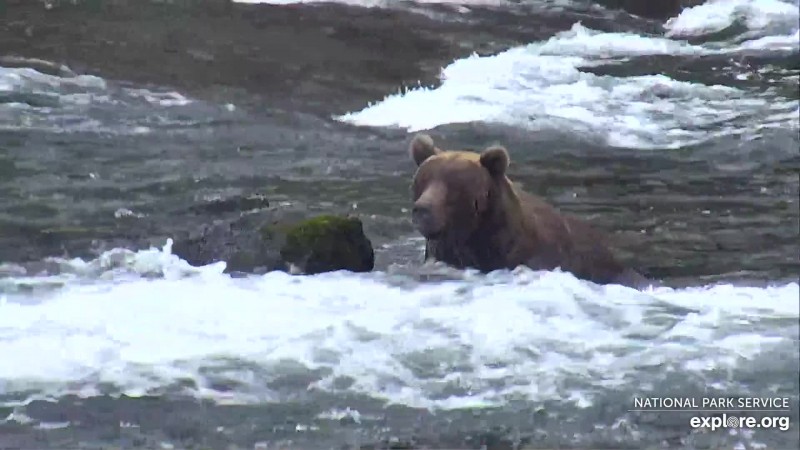 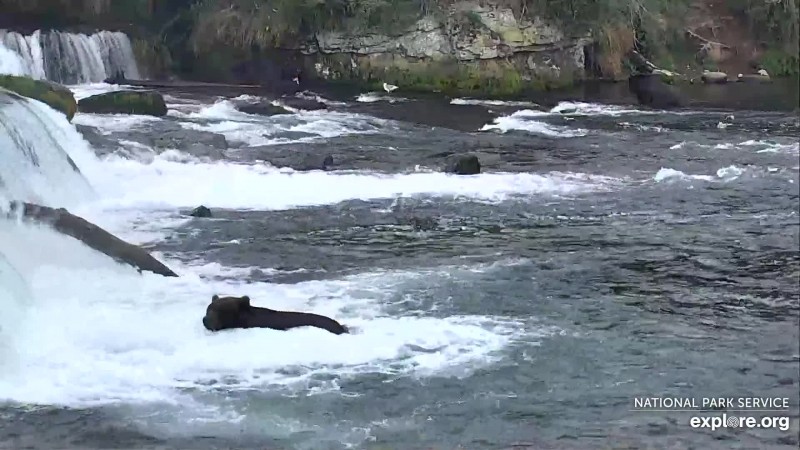 503 in the jacuzzi Snapshot by Phillydude

After seeing photos from Margot Creek of 435 Holly with her “ready for Fat Bear Week” body, she finally made her way back to Brooks River on Thursday! 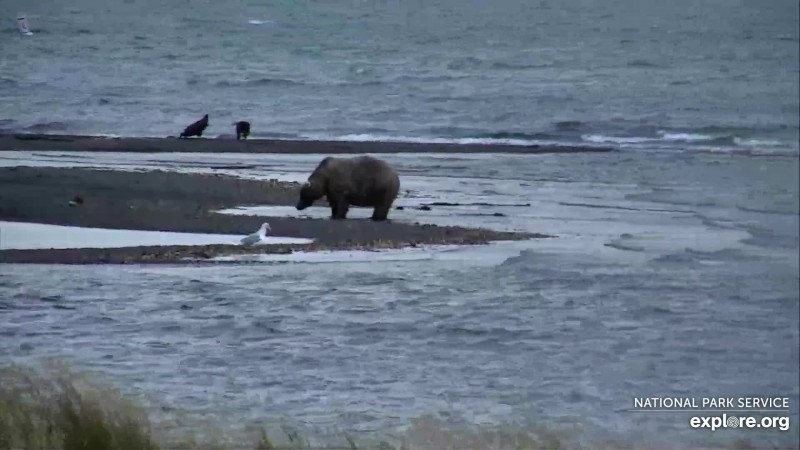 With our dominant male bears all hanging out at the falls, there continues to be some grumbling about who gets to fish where.  68 and 856 have had a few encounters with growling and posturing. One evening 856 was enjoying a salmon in his new spot behind the log in the office, when 68 decided to try and sneak into the far pool.  856 had a tough time deciding whether to continue eating or chase off 68. He chose a combination of both, grabbing a few more bites then chasing 68. 856 couldn’t growl at 68 at first since he was still chewing his salmon. 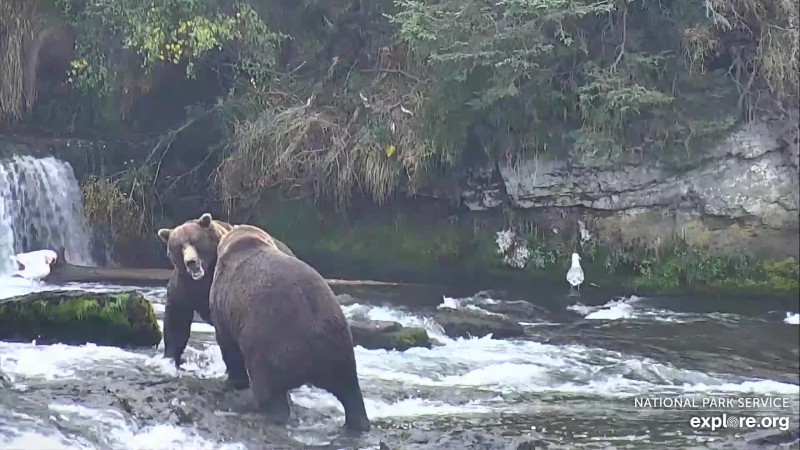 Subadult bear 812 was seen multitasking this week.  Eating his fish at a rock and getting his exercising out of the way at the same time.  🙂

812 found himself in a precarious position on the lip of the falls when 747 came across the top of the falls and stood so that 812 had nowhere to go but backwards toward the edge of the falls.  Not sure how he hung on and managed not to fall completely off!

A little later, 812 was chased across the top of the falls by 747.  856 and 503 watched with interest from below the falls. It was easy for us viewers to imagine that they were astonished to see that 747 could move that fast considering his huge size. 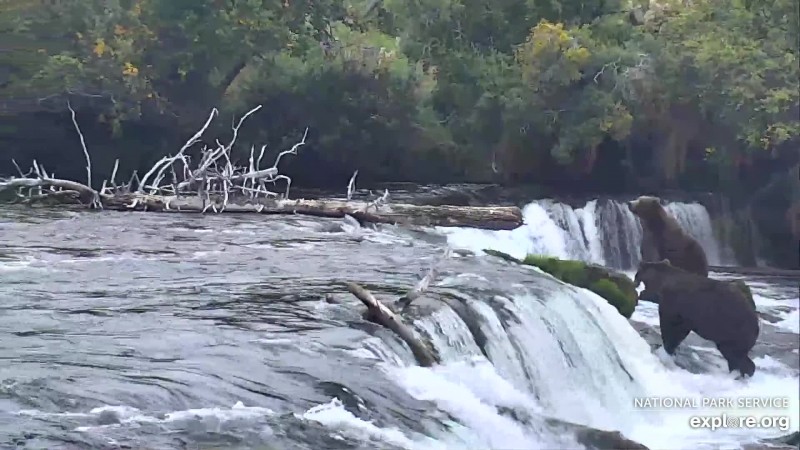 Young, female subadult 610 was seen trying to fish at the Falls this week.  There is speculation that this bear was abandoned as a yearling so we really enjoy seeing her thrive and find her place at the river. 610 sitting in the far pool Snapshot by SgtPepper

610 also tried her paw in the jacuzzi this week. She didn’t have any success but it was great to see her try a new fishing spot. 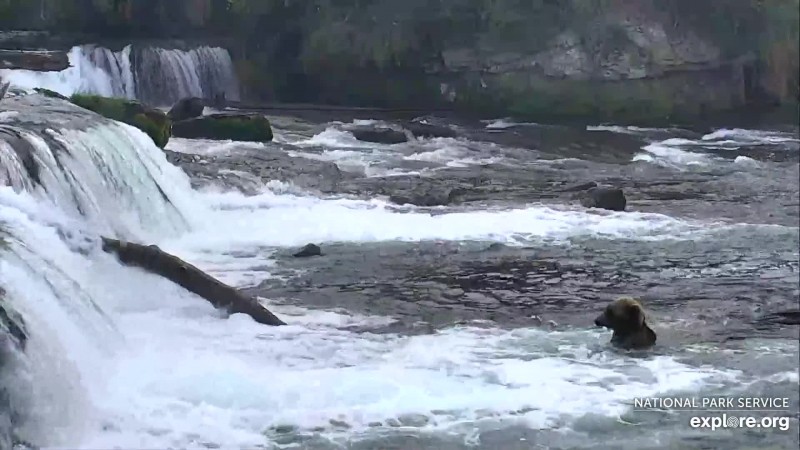 610 in the jacuzzi Snapshot by Bearz61

Other subadults provided what seemed like hours of entertainment playing in the Lower River area. Lots of subadults on the lower river Snapshot by corrwest

The large tree/root ball mostly submerged in the Lower River continues to be a favorite play item for the subadults.  They also seem to find fish that are possibly getting caught in the underwater parts of this tree. 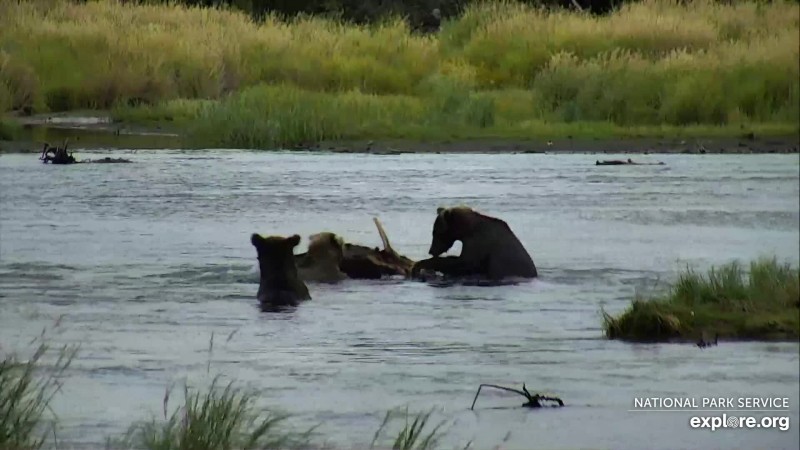 A couple subadults found a new downed tree to play on this past week as well. We could also see them digging around this one possibly trying to get salmon that had snagged on it as they drifted downriver. Subadults play on a downed tree or branch Snapshot by Bearz61

We’ve enjoyed seeing rainbows on the cams in the past, but this one seen from the Riffles cam was a different view and beautiful to see. 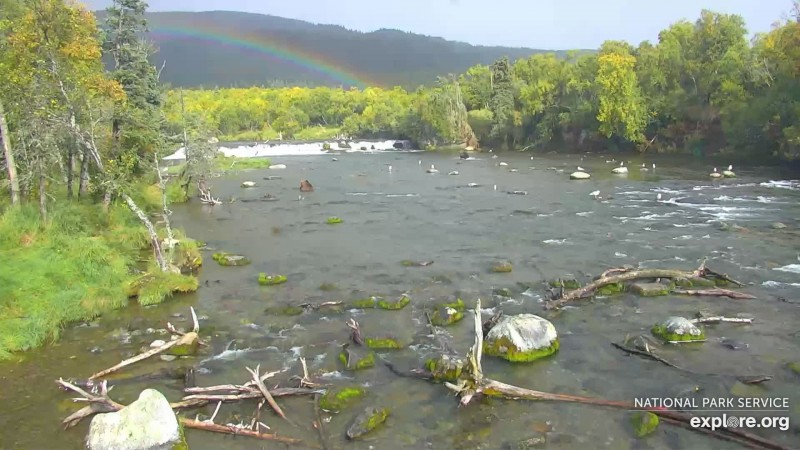 Live chat with Rangers Naomi and Nick about bear management.

Live chat with Rangers Naomi and Michael about bear genetics.