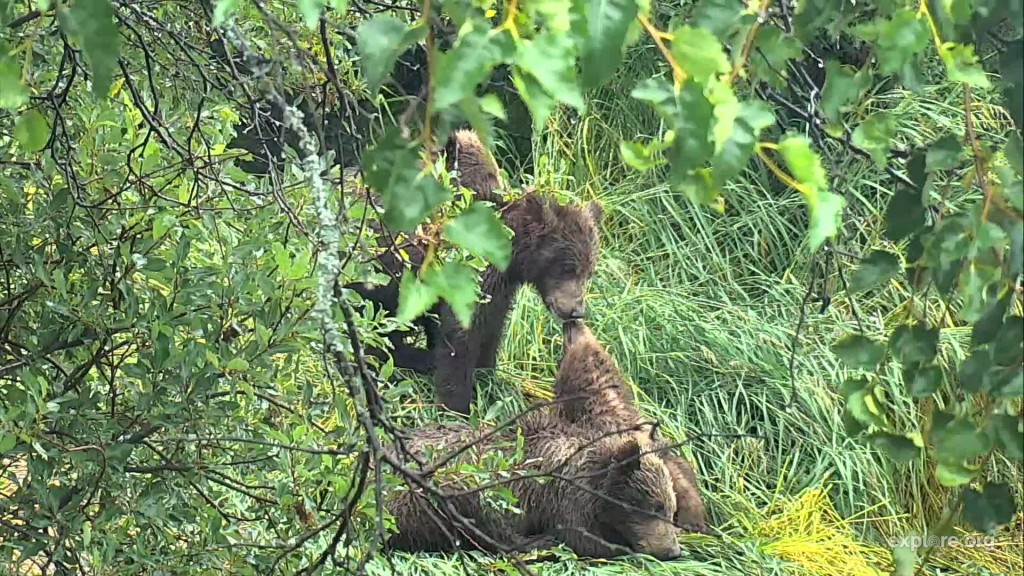 This week’s highlights have centered around cubs and sub adults!  Although we are still seeing the adult males and single females fishing at the falls, most of the greatest views have included playing sub adults, and Sows with cubs.  This weeks highlights video can be found here.

The newest identified sow with 2 coy, 505, continued to spend time on the far side of the falls a couple different days.  She and her cubs would alternately come down to the river to fish for a while and then go back up the path to a resting area.  Her cubs are quite active and alert. 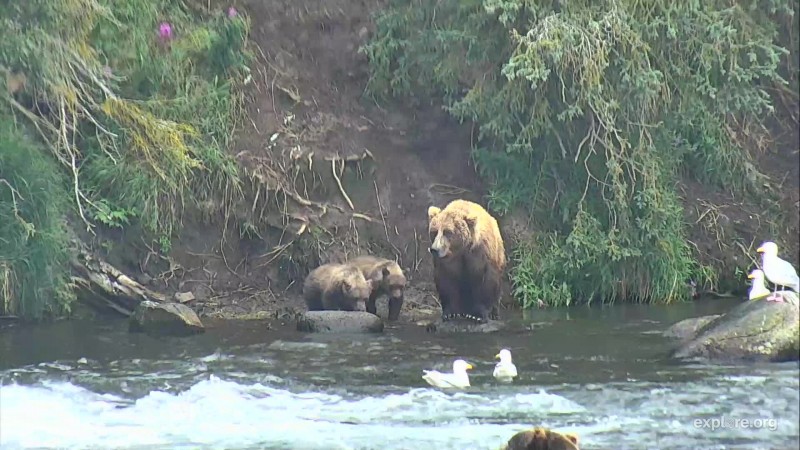 505 and her two coy Snapshot by Samanthabear

94 and her 3 coy have remained in the Lower River area.  We saw the cubs playing across from the Lower River platform.  They also have a favorite spot in the oxbow area of the Lower River.  As mentioned in last week’s review, the cubs spend time up a tree in that area while 94 rests on the ground or goes off to fish. 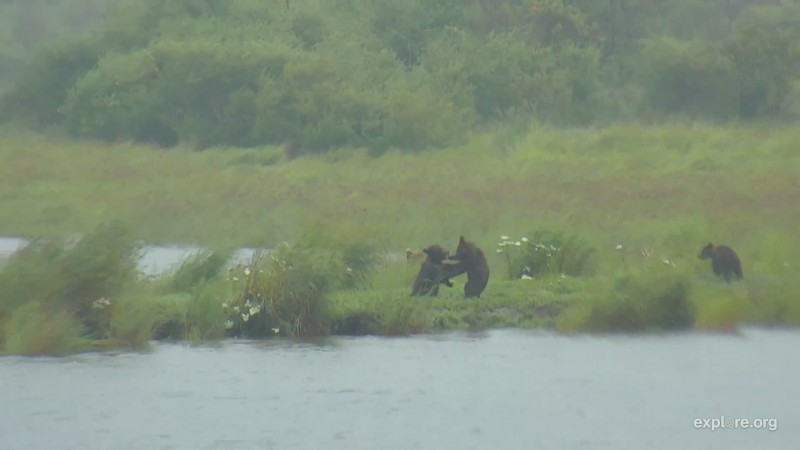 94’s coy playing along the closed trail Snapshot by Duska 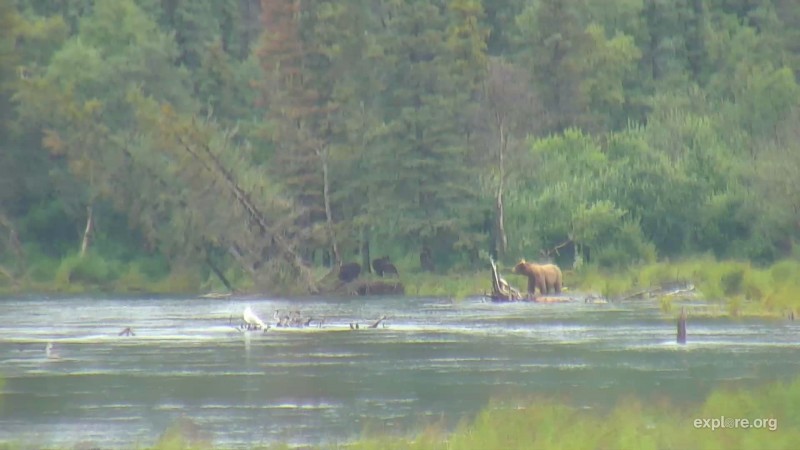 94 and her coy near the oxbow Snapshot by CamOp Nan

435 Holly and her yearlings have also been regular visitors to the falls area.  Her cubs are very well fed and healthy looking. They have entertained us with their antics climbing around on the rocks.  435 and family also spend some productive time fishing in the Lower River area. 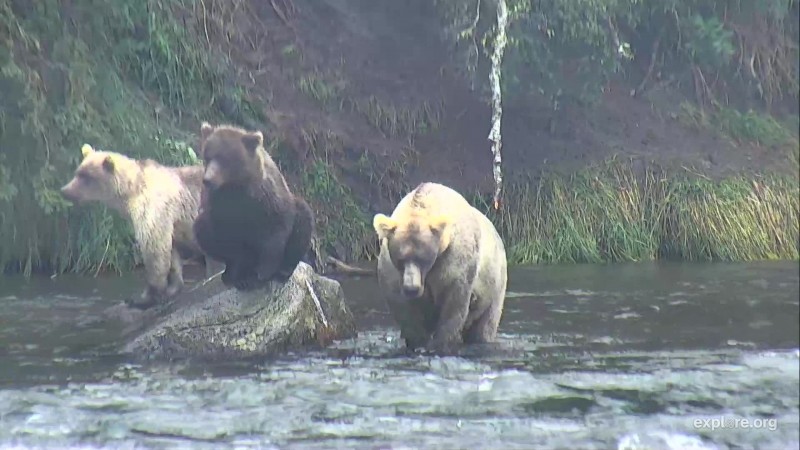 435 Holly and yearlings Snapshot by Coloradocarol

435 Holly and her yearlings also surprised a trio of subadults near the lower river platform. The subadults were greeting each other and sniffing around for scraps when all three started sniffing the air and got up and walked towards the platform. We then saw 435’s darker yearling in the lead, she and the cubs chased the subadults under the platform and out of cam view. 435 and her yearlings then came out and snorkeled into the river and we got a good view of 435 swimming past the underwater cam. 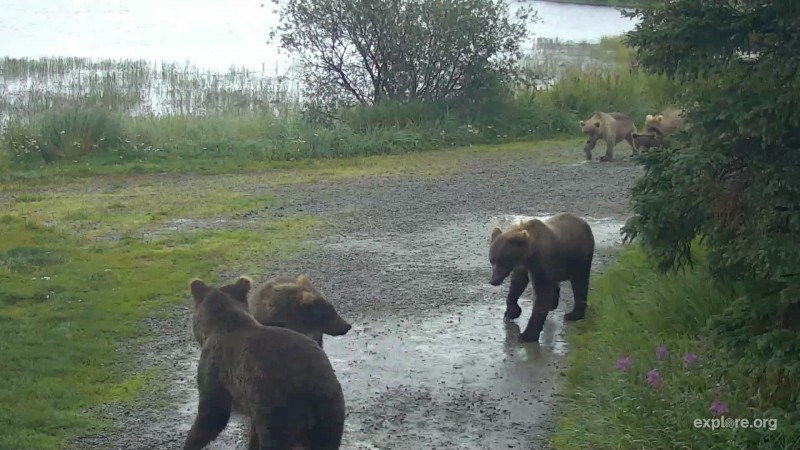 435 and yearlings surprising trio of subadults Snapshot by CamOp Arya

In the Mom and cubs department, 402 and her 4 coy definitely stole the show this week.  402 is known for bringing her previous spring cubs (or cubs of the year-coy) to the falls. This week she again parked her cubs either in the grassy area next to the falls platform, or on the cement fish ladder barrier at the lip of the falls while she went fishing.  402 is an excellent lip fisher and was seen catching many fish. We’re glad to see this as she has some really high energy demands on her body to produce enough milk for 4 growing cubs. She may need to produce up to 4 quarts of milk daily! 402 also spent some time showing off her other fishing strategy which is diving.  She dives completely under the water in the jacuzzi area and hunts for fish. Video of them snuggling on the river bank can be seen here. 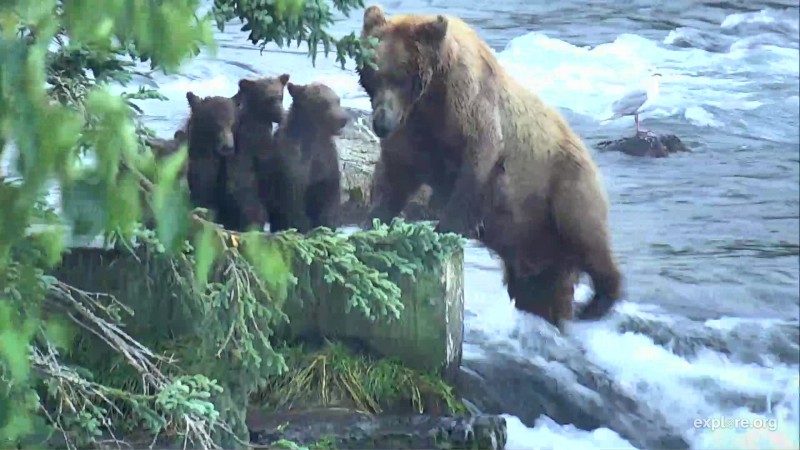 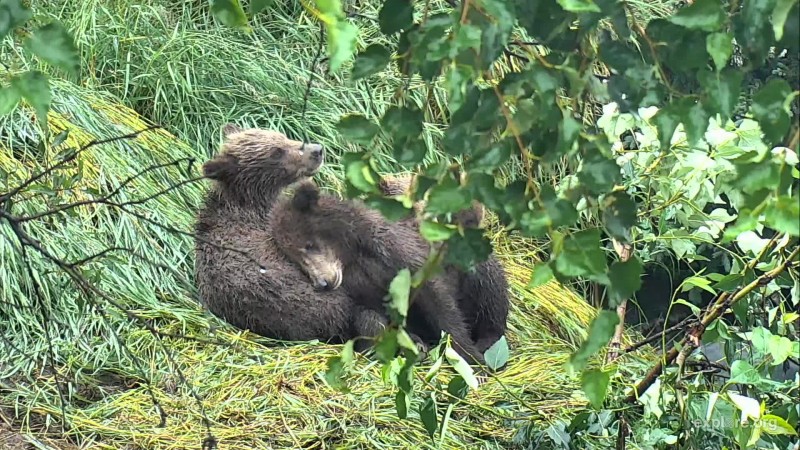 402’s coy snuggling on the river bank Snapshot by denverpony 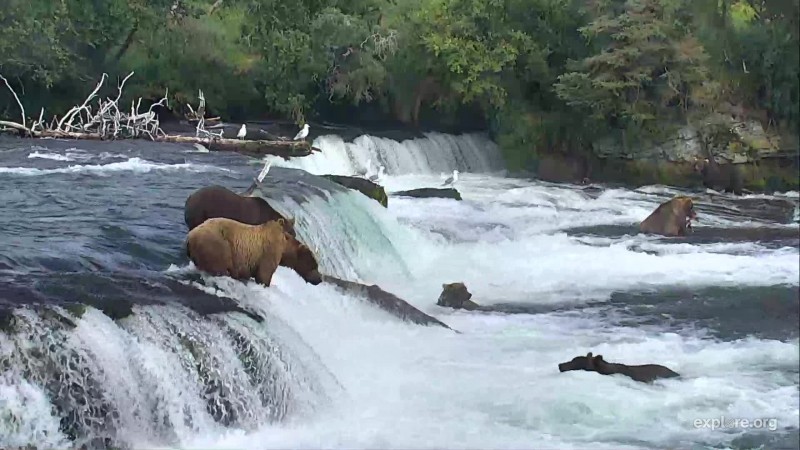 Things went smoothly until 812 tried to exit the lip via the fish ladder area. Since 402 had parked her cubs just below that area in the grass, she became quite defensive, and charged after 812, confronting him below the falls and making sure he left the area speedily.  Poor 812 was a bit surprised it seemed, we think he just wanted to leave and had no idea the cubs were there. 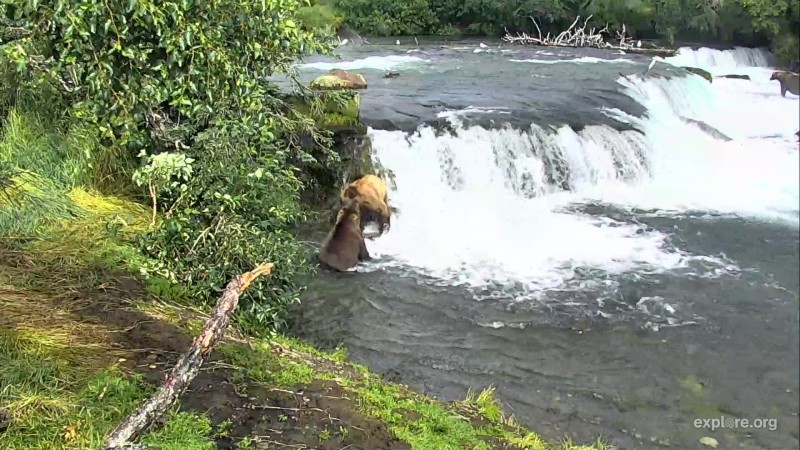 402 having a kerfuffle with 812 Snapshot by Bookmom

402’s cubs had a little white water experience in the riffles area this week.  While on the far side of the river trying to keep up with 402, the rapidly running river took them away!  They moved so quickly, the cam couldn’t keep up, but happily found them on the opposite side of the river swimming strongly and following 402 up onto the bank. 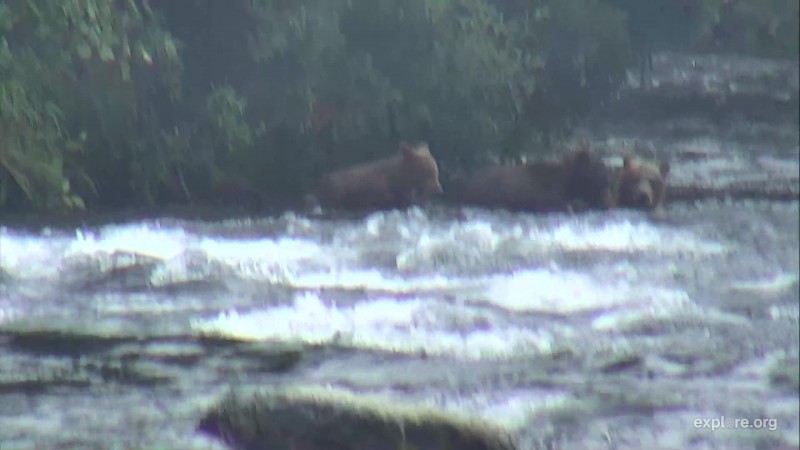 402’s coy starting across the river Snapshot by Bearz61 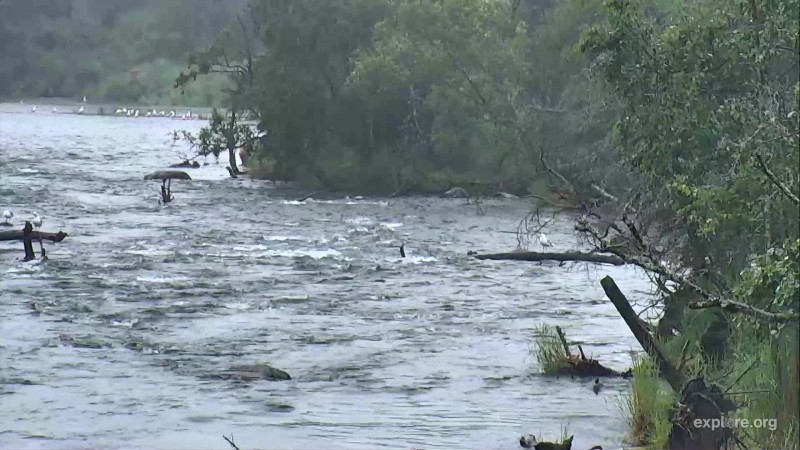 402’s coys make it across the river Snapshot by LSEARLS

Some sows with cubs have not been seen on cam this week.  They may be fishing where the cams can’t see them or they may have moved on – following the spawning salmon to smaller streams and creeks.  We did not see 132, 451, 482, or 813 with their cubs this week.

Moving on to the sub adults….  Wow! The large salmon run this season has contributed to some very well fed sub adults, which means many of them have taken time off for playing or play-fighting.  There have been too many sessions involving too many different sub adults to mention, but it has been a joy to watch these bears who mostly live a difficult life in the wild, still take time out to get some fun out of it. 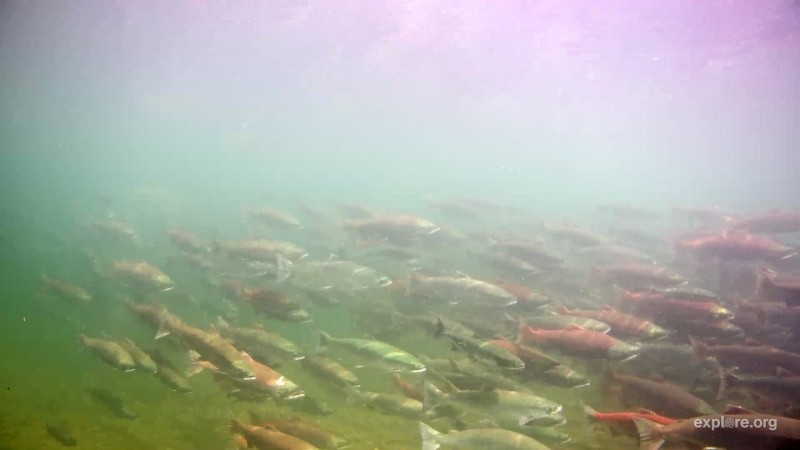 Not surprisingly, many of the sub adult play sessions have involved bear 503.  Although he is now considered a young adult, he still seems to really get enjoyment out of playing with younger and older bears alike.  Two subadults were seen playing at the falls for well over 30 minutes! 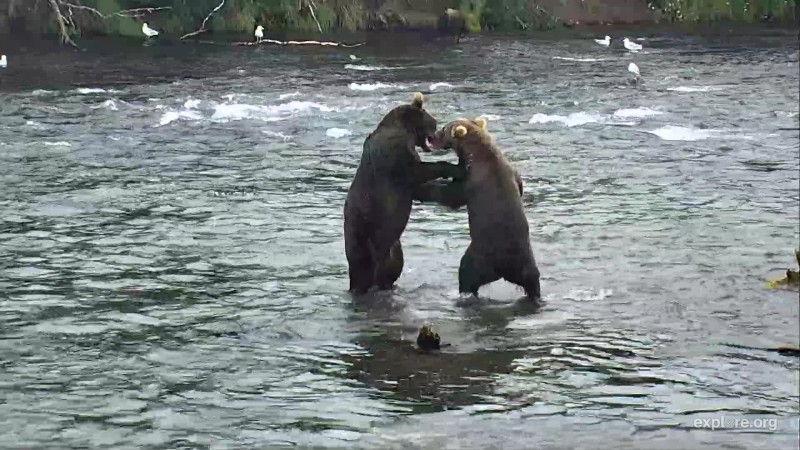 503 playing with subadult Snapshot by Carol b

Two subadults were also seen near the bridge having a very long play session in and around the trees and bushes there. They played for almost a half an hour, and I like many viewers wondered if they would tear down some of the trees with their rough and tumble play. 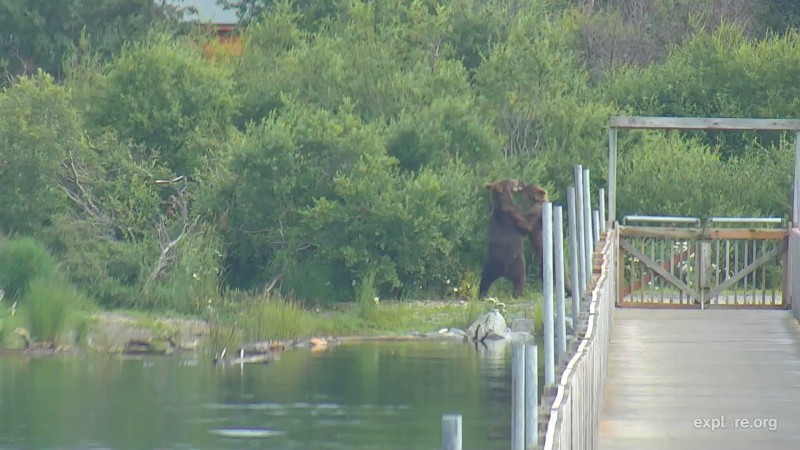 two subadults play near the bridge Snapshot by Caroline B

The large salmon run has also contributed to the large physique that we’ve seen on all the adult bears. 480 Otis and 747 have really packed on the pounds in preparation for hibernation as well as fat bear week. We cannot believe how big they already are, its hard to imagine what they will look like come fall! 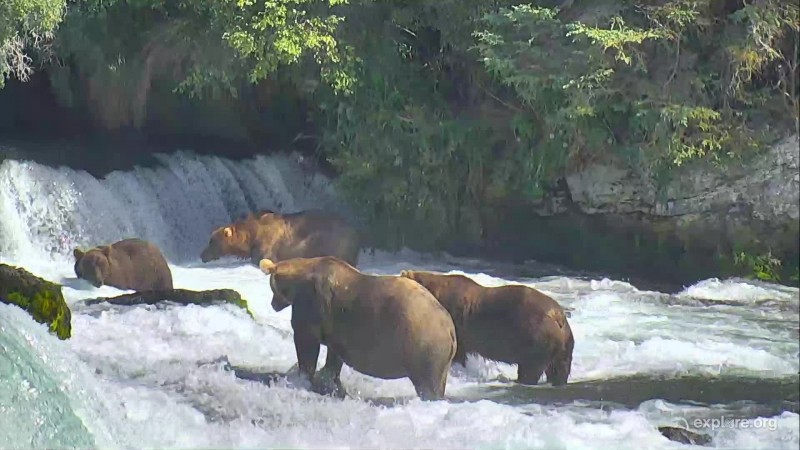 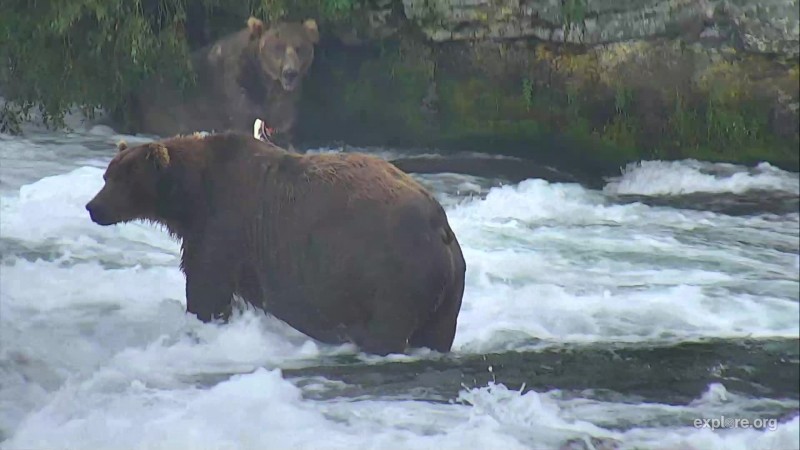 503, known last season for his “water aerobics” in the jacuzzi, showed us on Tuesday that he had not lost his skills!  He was caught on cam on his back waving his long legs in the air once again…. 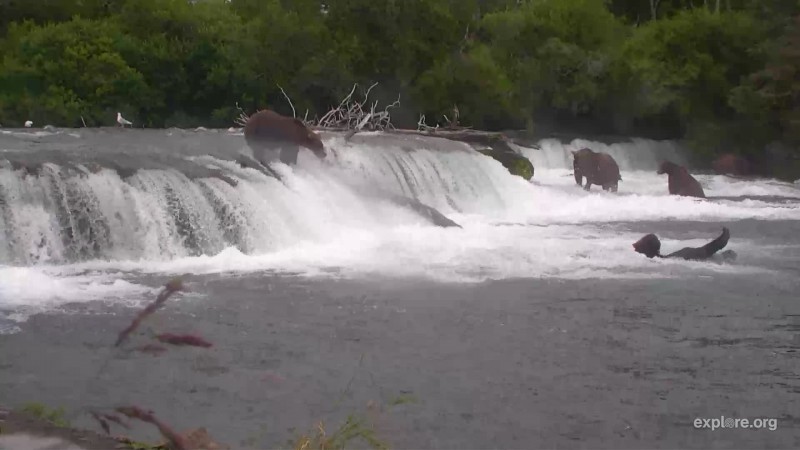 503 doing his signature back float Snapshot by Lynnshultz

503 has also garnered his own posse of subadults that eagerly await his scraps or to play with him just outside the jacuzzi. On Wednesday evening the jacuzzi looked more like a teen swim night. This at one time prime fishing spot for the top of the hierarchy boars was filled with subadults! 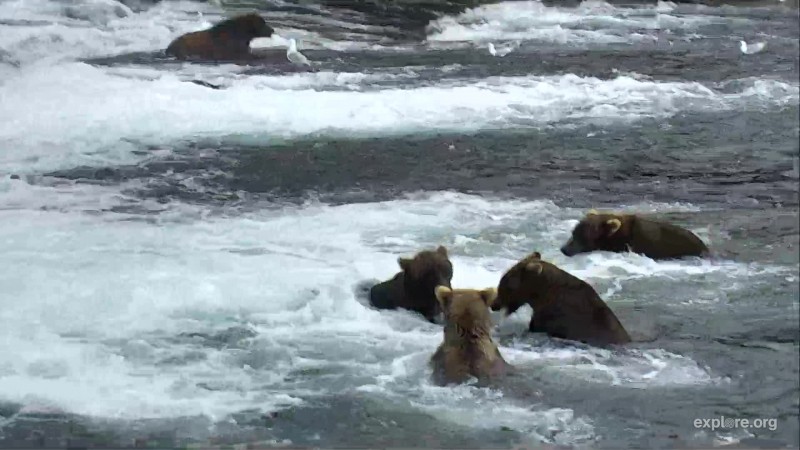 A couple of other items worth honorable mention from the sub adults:  812, who is in only his second year on his own has been having remarkable success fishing the lip of the falls!  He is a fairly large bear for his age and has been catching quite a number of fish during his times at the lip. 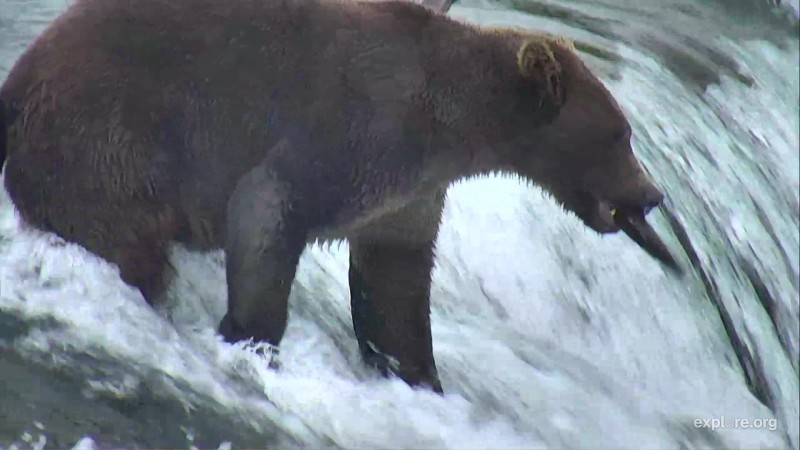 812 making a successful catch on the lip Snapshot by daisysue

We also saw the return of one of last years viewers favorites “little lip fisher” now 804 as she received a number from the bear monitors last year. She has taken up residence on the lip the past couple days to the delight of many viewers. 804 on the lip Snapshot by Darlene Martin

Another unknown sub adult gave us some comic relief by passing up close and personal by the Brooks Falls Low cam….  carrying his/her hat! Well, okay, the hat was likely dropped by a visitor (the one with the wet head) but the sub adult enjoyed a few moments trying it out.

subadult finds hat to play with screenshot by LaniH

We got to view a wolf on the cams twice this week.  This one (not sure it was the same one both times) seemed better fed than the earlier visitors and also had a nice looking brownish colored coat.  It was seen out on the spit, and also came by the Brooks Falls Low cam for a close up. 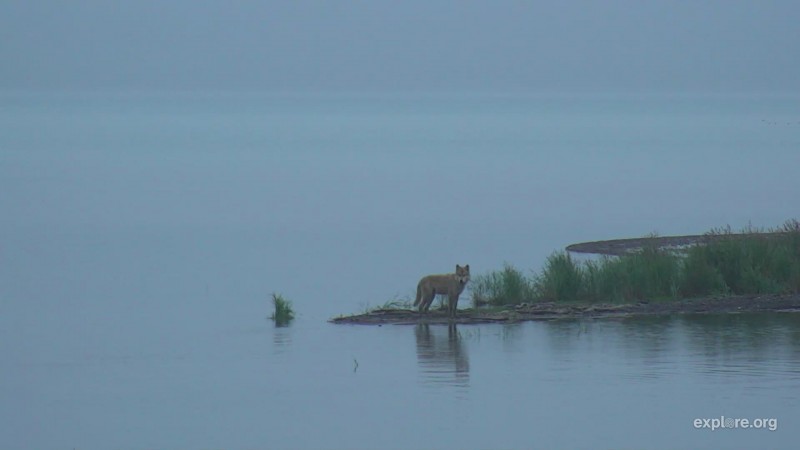 wolf on the spit Snapshot by CamOp Kelly 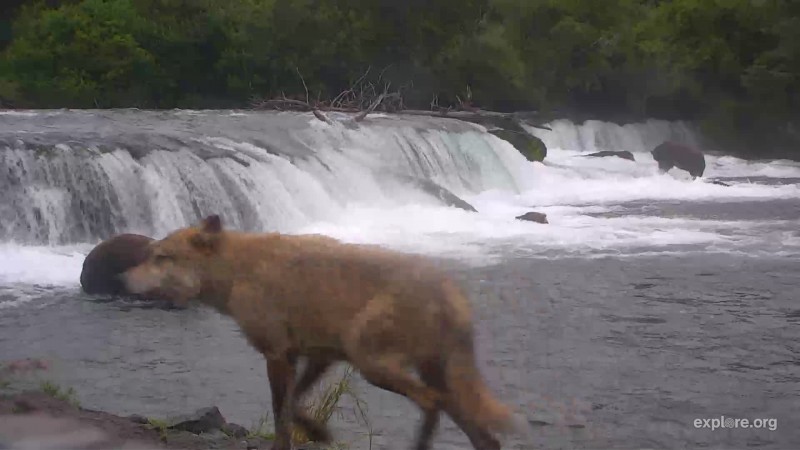 The underwater cam has continued to delight viewers, along with the ever visible salmon we get close up looks at bears paws and claws. Two subadults were also seen playing with a stick near the cam as well. 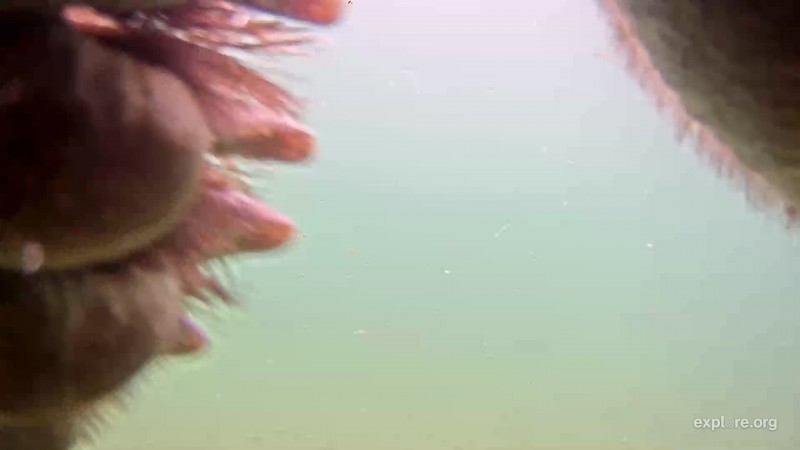 Now for our favorite moments of the week:

My favorite moment would have to be seeing 435’s darker colored yearling laying on a rock to eat. I could not stop laughing as I watched. I have never seen a bear lay down like that to eat, it was just too cute and funny for words. 435’s yearling lays down to eat Snapshot by CamOp Tink

My favorite moment(s) this week were the brief glimpses caught by the cams of some of the other wildlife in the Brooks area.  The Bald Eagles (both adult and subadult), the wolf, an otter swimming in the Lower River area, huge numbers of gulls gathering now that the bears are leaving more scraps for them, a magpie checking out the Brooks Falls Low cam, a quick view of the ground squirrel on Dumpling Mountain again.  The bears are the stars, but I love seeing all the other creatures as well. Bear and juvenile bald eagle on the spit Snapshot by corrwest

Juvenile bald eagle on the spit Snapshot by Tripp54 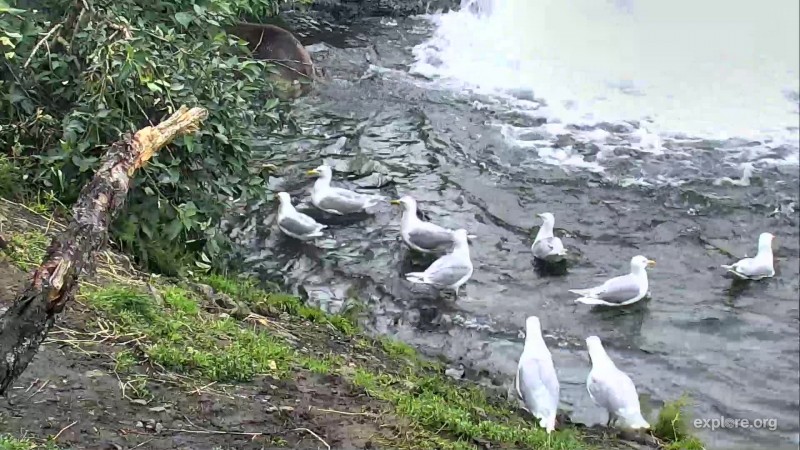 Mike Fitz did two remote play by plays you can watch them here and here.

Katmai Rangers Kelsea and Andrew did a live chat about the Katmai coast, view it here.

Grant Hilderbrand also did a great live chat about the bears of the Katmai Coast, watch it here.

Mike Fitz has a new blog out where he discusses bear 451 and her three yearlings, read it here.