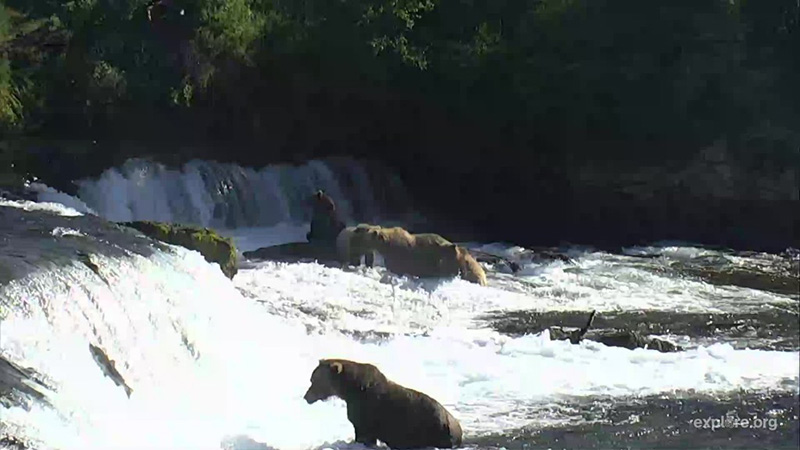 Queen 410 returns to the falls

Hi and welcome to our new weekly Bear Cam blog, we will be publishing this blog every Saturday with a review of the previous weeks Bear Cam highlights brought to you by your Bear Cam mods LaniH and GABear

We should probably start with the most talked about sow at Brooks, 128 Grazer, who is very protective of her cubs. 128 had quite a few run-ins with other bears this week. The first incident happened on July 30, 128 was in the far pool when an unknown male bear got too close to her cubs and 128 backed him up against the corner rock in the far pool and he turned and ran away and 32 Chunk who had been snorkeling came up to investigate. 128, as she’s running after the unknown bear, runs into 32 Chunk and he is grazered. Here is a video: https://business.facebook.com/endangeredanimals/videos/10154746391090334/.

On July 31, 128 Grazer and cubs were again at the falls in the far pool.  When she goes up top of the falls, 755 Scare D Bear enters the office. 128 Grazer comes down from the top of the falls a bit later and chases him up the far bank, she then fishes the office with the cubs. 273 joins her in the far pool near table rock and 128 feels she gets too close to the cubs and attacks 273 not once but twice.

The very next day, on August 1, 128 is again at the falls and her cubs are snorkeling around the island when 503 comes up from the riffles. One of Grazer’s cubs walks up to sniff 503 who bluff charges the cub, who backs away. The cub then resumes getting close to 503 who again bluff charges and Grazer’s smallest cub runs to defend her brother. 128 Grazer now runs over to check out what is going on and 503 backs away and sits down in the river to snorkel. As his head is under the water, Grazer runs at him and backs him down towards the riffles; you see 153, who is also at the falls with her cubs, run to see what is going on leaving her cubs in the far pool. Here is a video: https://www.youtube.com/watch?v=THgX6p7QwsU&feature=youtu.be

August 3 128 Grazer and cubs were again at the falls, 128 was on the lip and in the far pool 32 Chunk was coming from the top of the falls, the unknown bear that was in the far pool climbed the falls and walked towards 128. About midway across the falls he stopped in between 128 and 32. He walked slowly up river and sat by a rock within view of the falls. 128 continued to fish the lip, but after a little while she turned and crept slowly towards the unknown bear, who gets up and starts to head for the far bank. 128 then runs after him and chases him all they way across to the other side of the river. She then turns around and comes across the river and down the fish ladder to join her cubs.

August 4 153 and cubs were fishing in the far pool when 128 Grazer entered the office area. One of 153’s cubs got a little too close to 128 and she bluff charged him, not once but twice. 153 ran to defend her cub from 128 after the second bluff charge, causing a minor kerfuffle between the two. 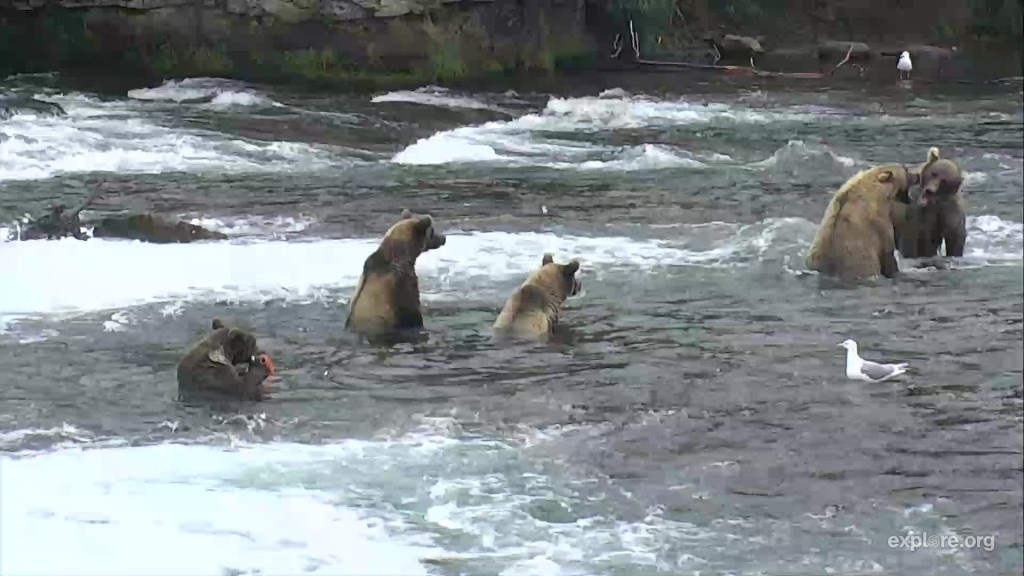 Blogs with good information on 128 Grazer and the protectiveness of her cubs:

The next big news for the week was that 410 Four-Ton was finally seen on cams, here is a pic of her at the falls on August 1. Why all the excitement over seeing 410? Well she is thought to be the oldest and largest sow fishing Brooks River, she was a spring cub in 1989. She also well known to be a marathon napper, she’ll nap on the spit, under and by the viewing platforms, and any where else she feels like napping. 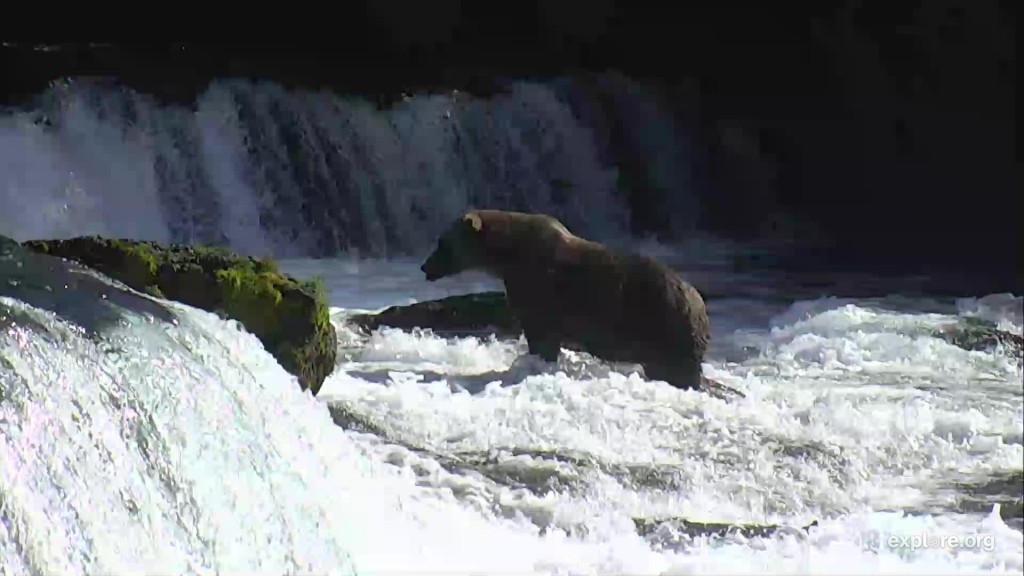 A video from two years ago of 410 napping by the LR platform: https://www.youtube.com/watch?v=nuBPP0Fej5w

Some of the funny things that happened this week:

July 30: In the morning 435 Holly was snorkeling and her cubs were waiting on the point and a juvenile eagle was perched in the tree above them. When 435 Holly came back, one of her cubs tried to climb up to see the eagle and 435 Holly even stood up to take a sniff of the eagle.  503 was in the J eating a salmon sitting up but partially laying on his back when 775 Lefty headed to the J and 503 scrambled to get up and dropped his fish. Later the same evening 32 Chunk was above the far pool and wanted to go down and fish but 480 Otis was there and wouldn’t move so 32 Chunk climbed down and slowly backed up while right next to 480.

July 31 on the Lower river out on the closed trail we saw a young subadult playing with a stick and rolling around on the ground.

August 2 435’s cub was spotted on the LR playing and bouncing on a tree stump, the cub would fall off run around and climb right back up and do it all over again.

The lower river was full of sows and cubs plus subadults. They have caused many bear jams and we have had some very good views of them playing and running around. The point is where quite a few sows and cubs like to hang out, there is a small pool of water there where we have seen 128 and cubs, 409 and cubs, 171 and cubs, and 435 Holly and coys play in and around. Pic of 128 and cubs enjoying the small pool: 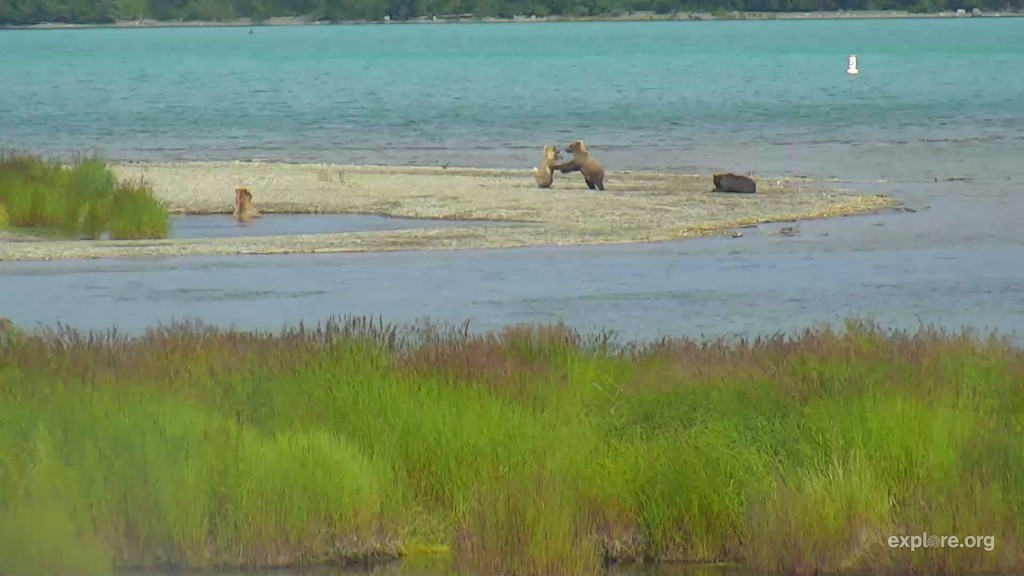 The subadults seem to congregate on the spit and run around and play, they are still learning what it means to be an independent bear. We have seen many play sessions between subadults out on the spit, on the path to camp and on the closed trail.  Pic of two subadults wrestling near the spit: 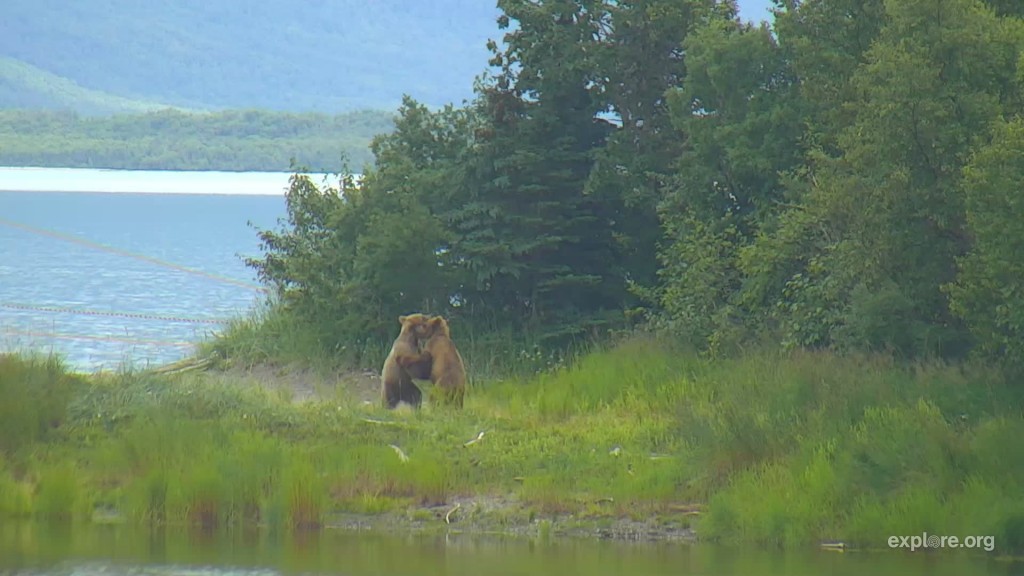 If you would like to read more about subadults, Ranger David Kopshever has a blog all about them: https://www.nps.gov/katm/blogs/subadult-summer.htm

Rangers Cathy and Rebecca did a chat about cubs and subadults: https://www.youtube.com/watch?v=EXVzg-JoUAU

Rangers Dave and Becca did a play by play on August 1: