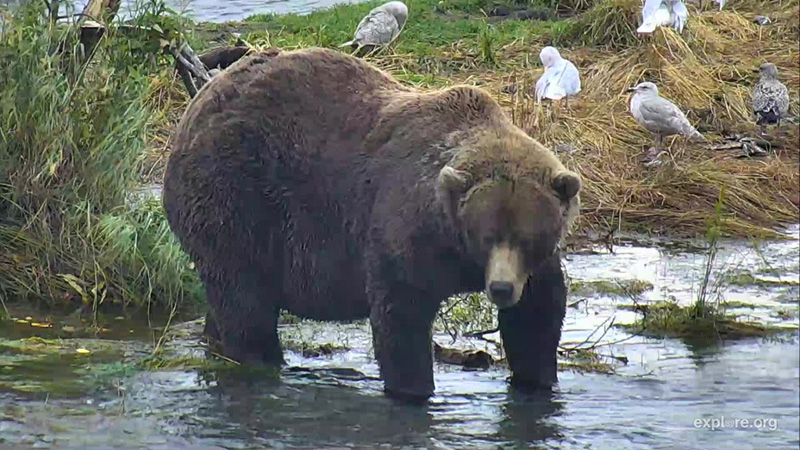 We still saw a fair amount of bears fishing around the falls this week.  The LR cams are still down so this has been great to have bears remain in view on the falls cam!  There were a few less as the week went on, but we are also seeing 2 or 3 bears hanging around who are unknown to us and this added to the interest. 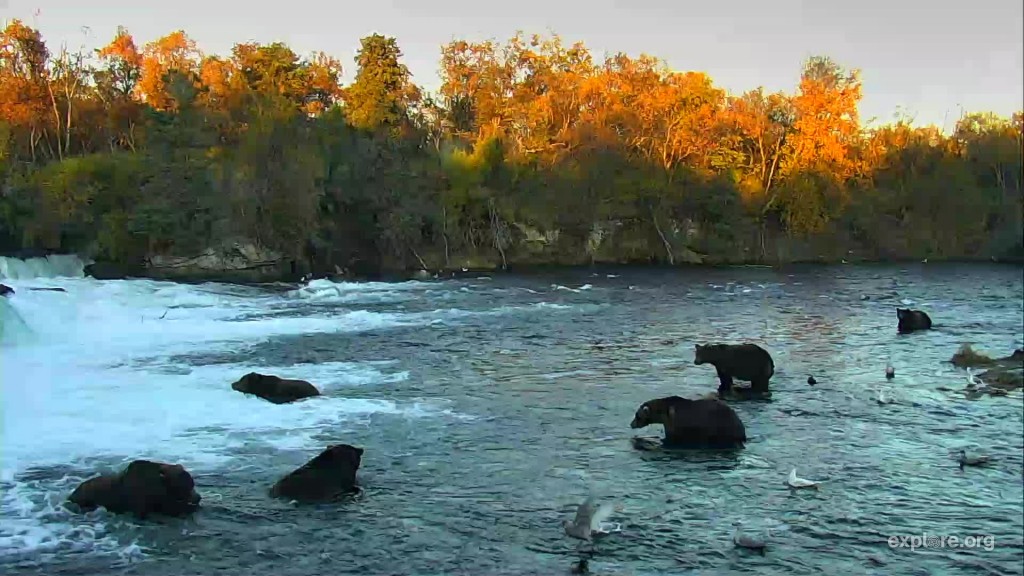 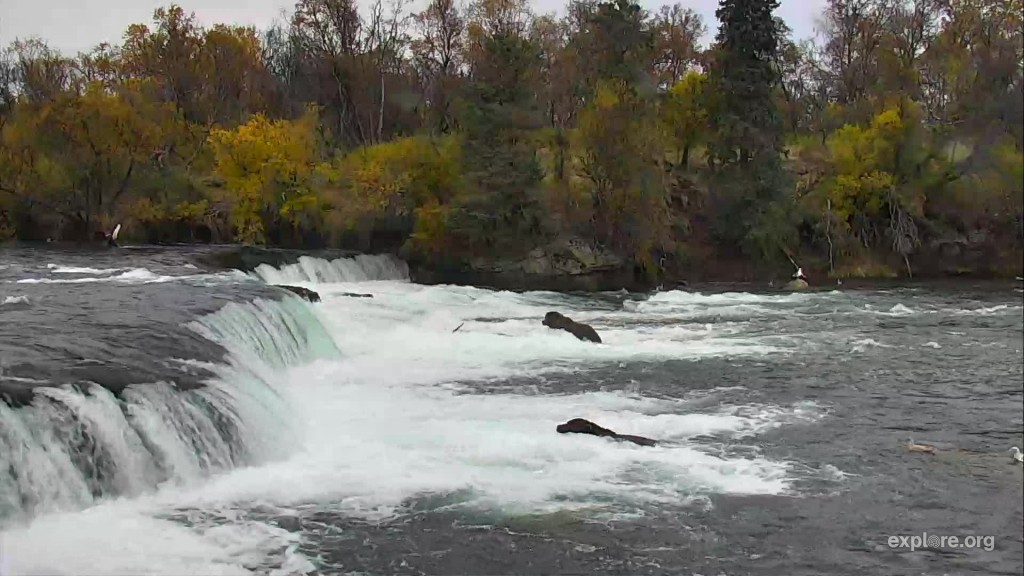 3 bears at the falls at the end of the week

This week, we have a guest contributor.  We asked Mike Fitz, former long time Ranger at Katmai NP & P and Brooks Camp, to talk about hyperpahgia in bears.  Thanks Mike, for this great explanation.

“Bears experience hunger in ways humans do not. They need to eat a year’s worth of food in six months or less to survive winter hibernation and the lean months of spring. To do this they eat A LOT, especially at this time of the year.

In bears, hyperphagia is the period of excessive eating which takes place in late summer and fall. During this time black bears will eat 20,000 calories of food per day. Katmai’s brown bears can easily eat even more by catching calorie-rich salmon. Even though their calorie intake is extremely high, hyperphagic bears don’t feel full.

Satiety is the feeling of fullness after a meal. During hyperphagia, a bear’s body temporarily suppresses the normal mechanisms that balance food intake with weight gain. The body says, “You aren’t full. You don’t have enough fat reserves and need to eat more.” In short, hyperphagic bears don’t feel sated. This contrasts with the excessive eating of bears in June and July when they are eating a lot, but their bodies probably still respond to a feeling of fullness (which is sometimes hard to believe when you watch Otis or 747 catch fish after fish after fish). Hyperphagia, therefore, is a physiological state of bears in late summer and fall, as much as it is a behavior we can see. It’s how they prepare to survive the famine ahead.” 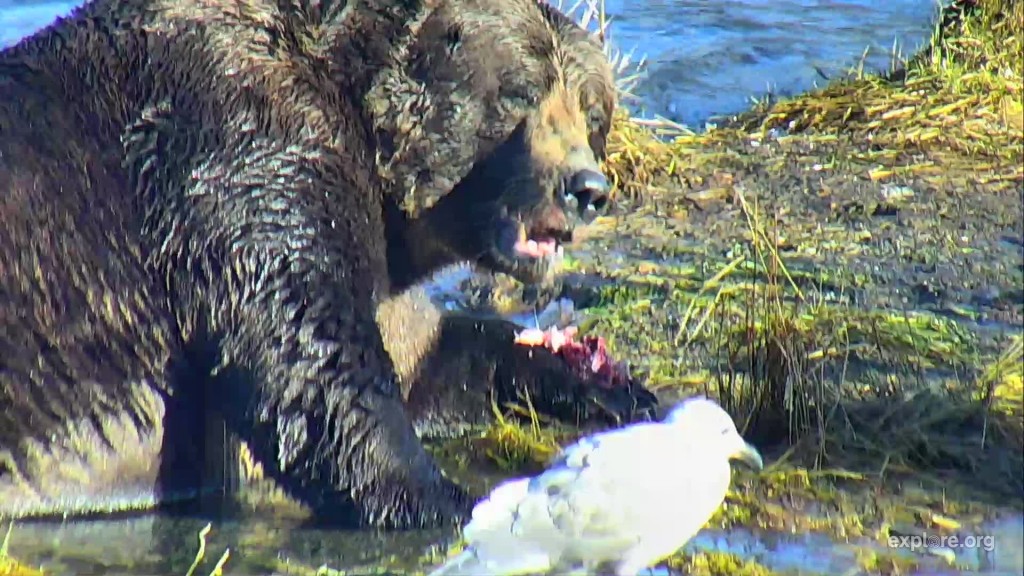 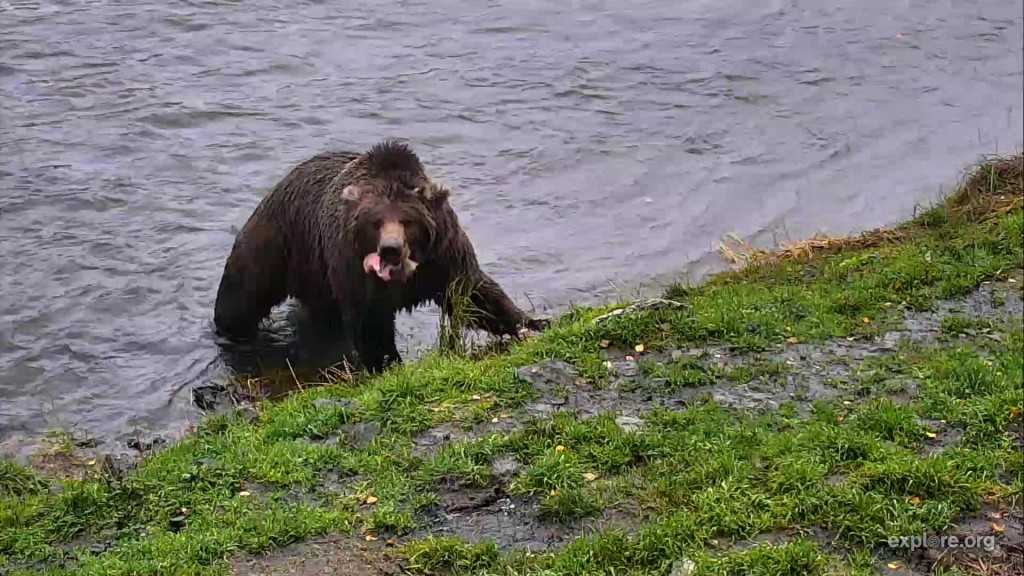 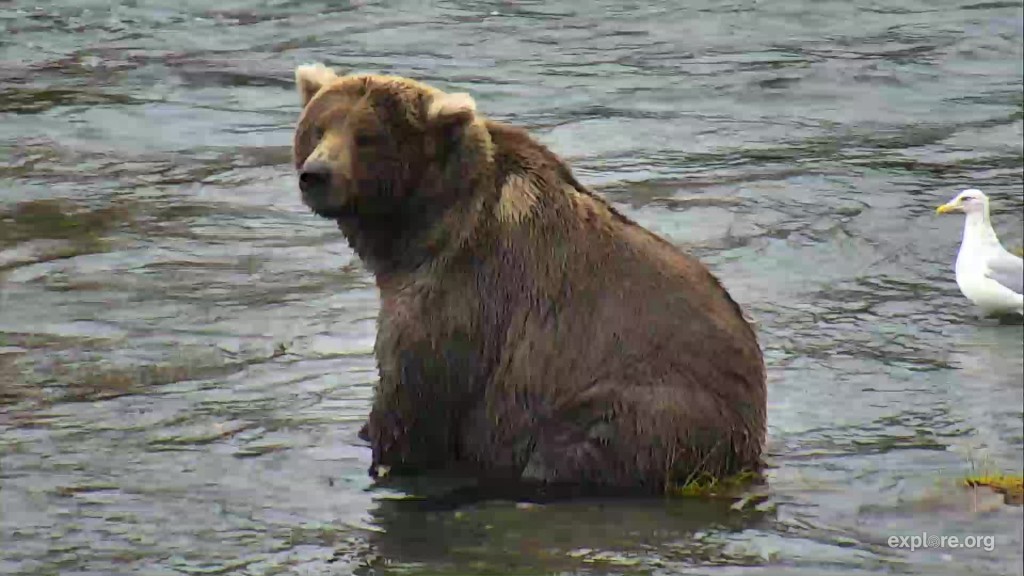 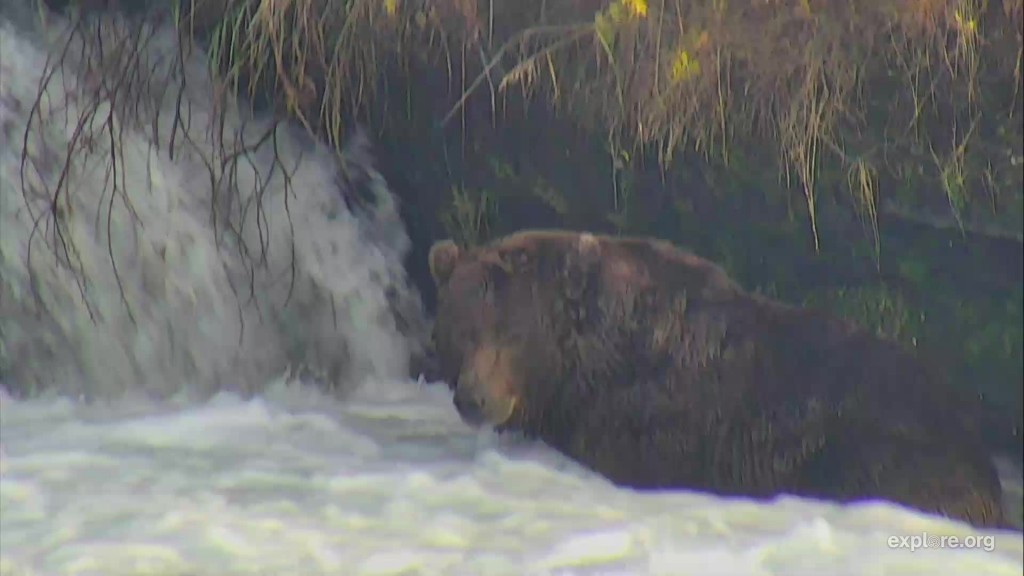 Unknown large male bear could be 115

Another as of yet not identified bear also visited the falls for a short while. Some think this bear could be 289, 700 or even 504, what are your thoughts? 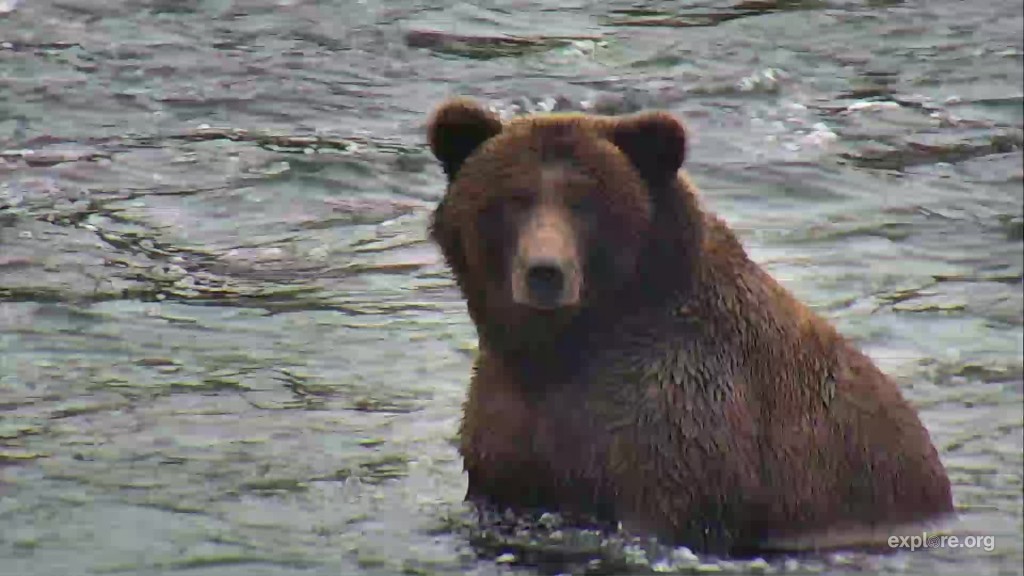 Most days find a regular, rotating crew of bears vying for a place of their choice, but generally doing so in a low key manner with mostly growling or grumbling in an effort to displace another bear – and often just going to a different spot if that doesn’t work.  Many of the interactions have involved bear 83 Wayne Brother who has complained, and been complained to in turn by 480 Otis, 32 Chunk, and 68.  856 and 474 have also done a share of rotating – keeping out of each other’s way it seems. View video of 32 Chunk and 83 Wayne Brother having a growl fest in the jacuzzi here. 32 Chunk also tried to steal some of 83 Wayne Brother’s salmon while they were in the jacuzzi; lots of growling and some pushing was involved. Video can be seen here. 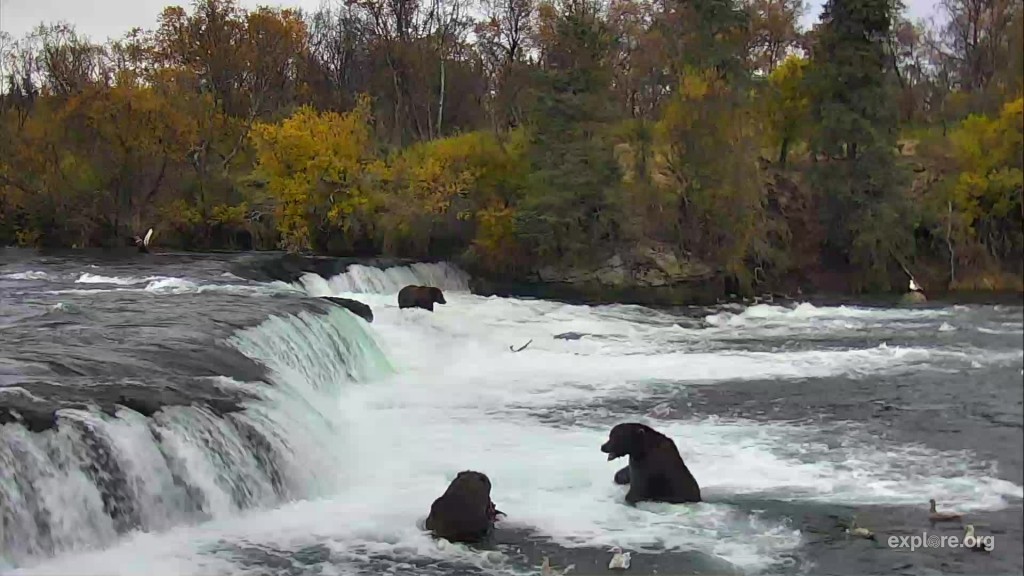 32 Chunk and 83 Wayne Brother fight over the Jacuzzi again

A few bears may have moved further down the river in their quest to find the dead and dying post spawn salmon.  We haven’t seen 879 this week, 747 was missing from the falls for a couple of days, and 480 Otis was seen heaving his quite large, old body up a muddy slope and wandering away one evening.  He, too, may have decided the Lower River area would be a good place to fish. 503 Cubadult continues to entertain us.  Both with how well he fits in with the older, bigger males – successfully fishing in several places at the falls; and with his playfulness as a sub adult.  He’s been seen playing with 151 Walker as well as the unknown bear with the shoulder patches. 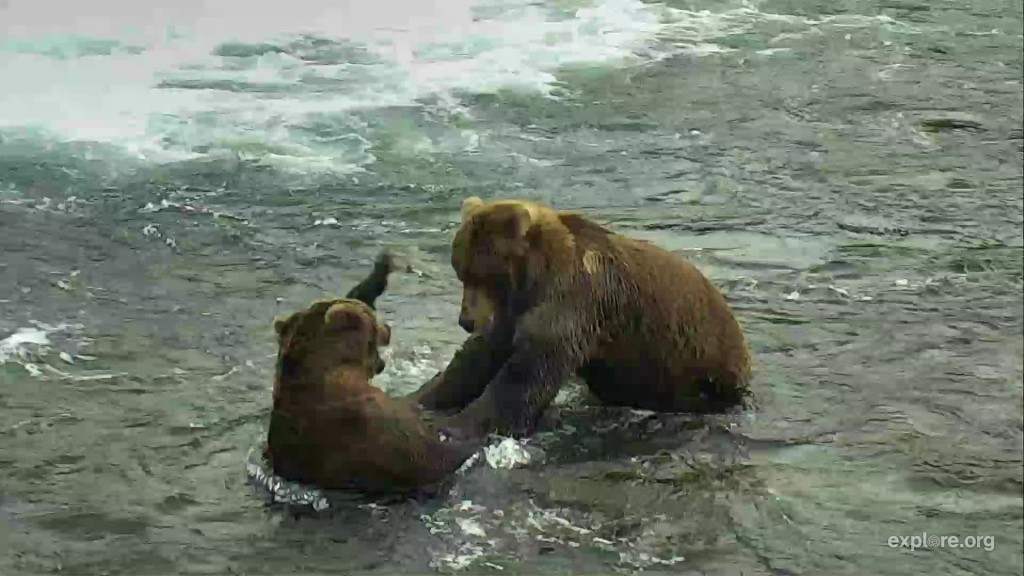 503 and the unknown shoulder patch bear play in the J

We had brief views of 4 different sows and cubs either on the riffles or at the the falls.  409 Beadnose, 708 Amelia, 284, and 153 all put in an appearance with their families.  Subadult 719 was also sighted, along with a couple of unknown subadults including the one who has continued to fish the lip so successfully. 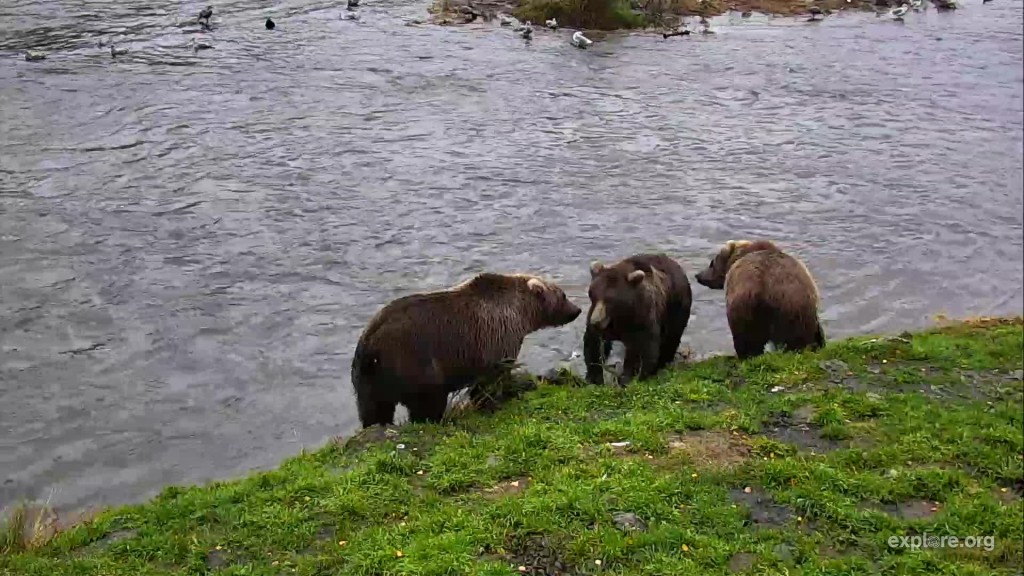 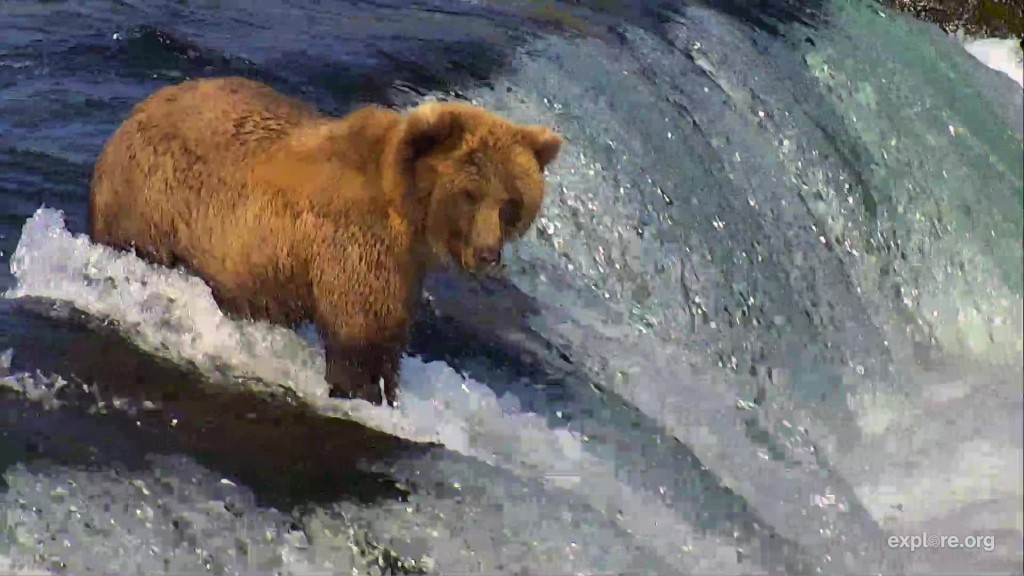 We did see something that no one remembers seeing on the cams before…..  Bear 68 was resting in the water at the edge of the island with many seagulls hanging around hoping for scraps as usual.  Apparently 68 remained still for so long, one of the gulls decided he was just another boulder in the river and decided to perch on his back!  The gull remained there for a bit, walking around some.  Even when 68 moved, the gull still stayed!  Video can be seen here. 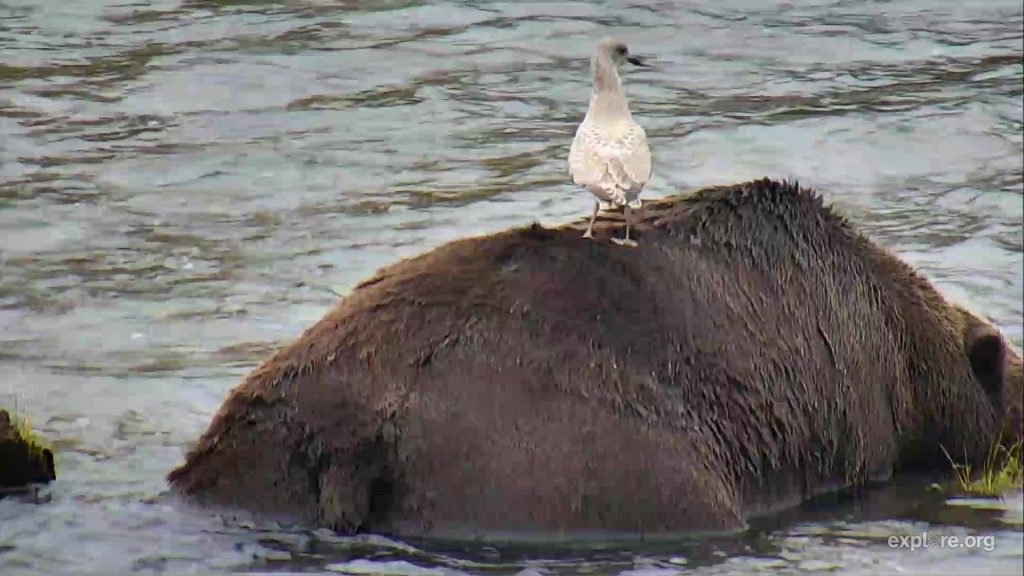 seagull on 68’s back

We also saw an interesting way to come down the far path. Bear 474 came down the path backwards! Given all the rain Brooks Falls has had this past week who can blame him. It sure was funny to watch. Video can be seen here. 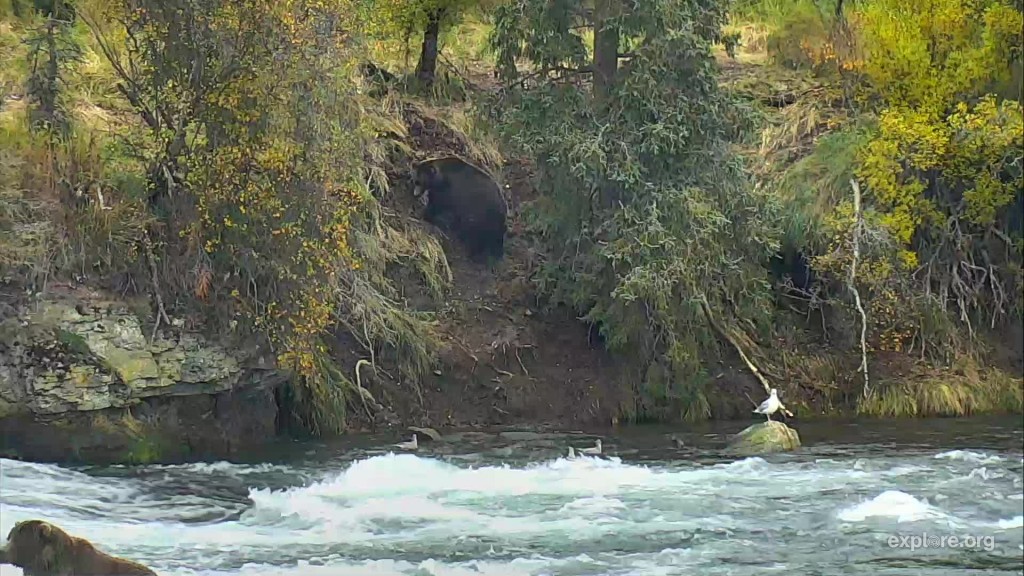 474 comes down the far path backwards

Some Bald Eagles are being seen more frequently now.  One of them gave us a great demonstration of how they get food by swooping toward the river, sending the gulls scattering, and grabbing a nice sized piece of leftover salmon in its talons. 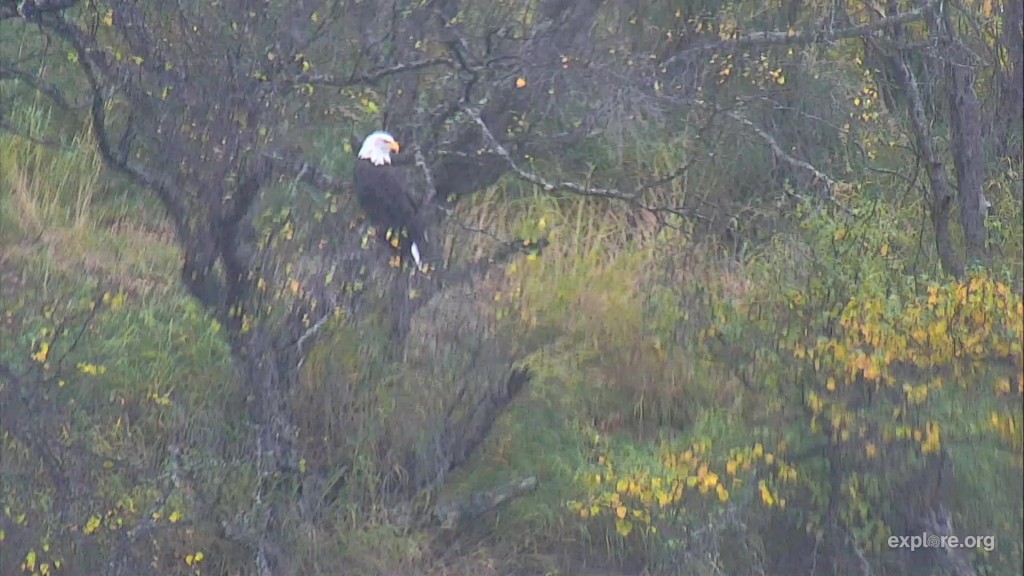 bald eagle at the falls

The annual Fat Bear Contest started on Wednesday.  Viewers were busy making posters for bears they thought could be contenders for days before the contest.  Not all these bears made the cut, but the posters are…. compelling!  You can view the posters here  (Thanks to a couple viewers, Erie (Ontario) and Stmango for putting all the posters on the site for us to view.)  Some viewers have taken their campaigning a step further by writing a full blog in support of their favorite candidate!!  Mike Fitz gave us his pick for Fat Bear – read all about it here.  The Contest is taking place on the Katmai National Park and Preserve Facebook page.  The bracket can be viewed there along with daily match ups that the viewers vote on with their “likes”.  There have been some hotly contested match ups!  The Fat Bear Champion will be crowned next Tuesday.