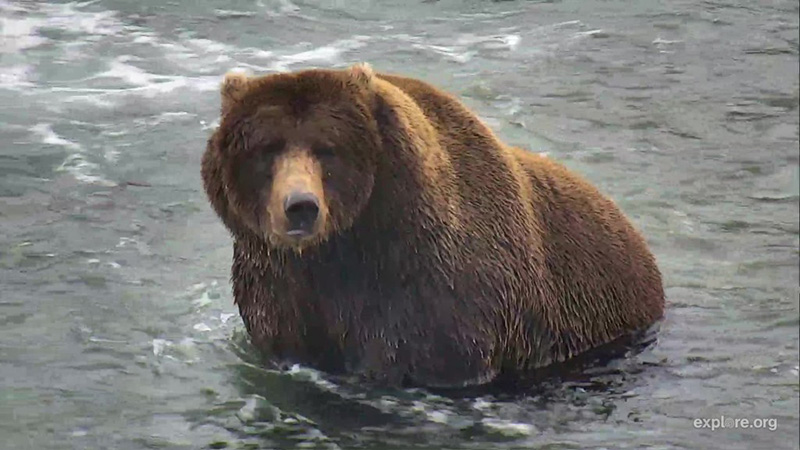 Fat Bear Week concluded and once again the champion is 480 Otis. It was a tight race and less than 100 votes separated 747 and 480. Current and former Rangers were campaigning for 747, and he even had the endorsement of an Alaska Senator. But the Otis fan base proved too large a group to overcome. This is his third time winning fat bear. Congratulations 480 Otis! 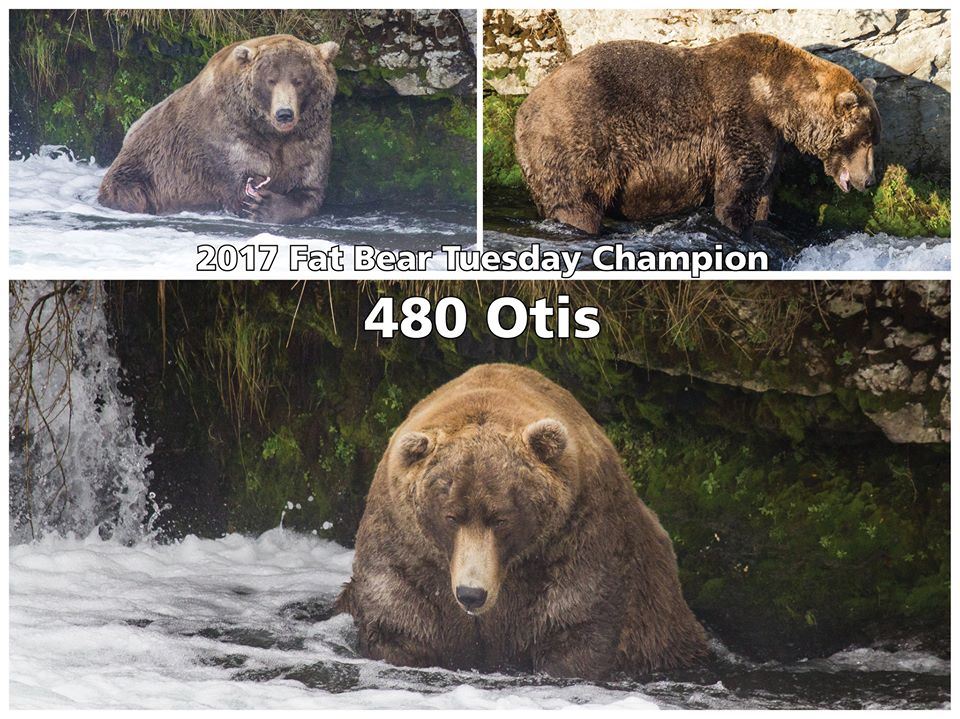 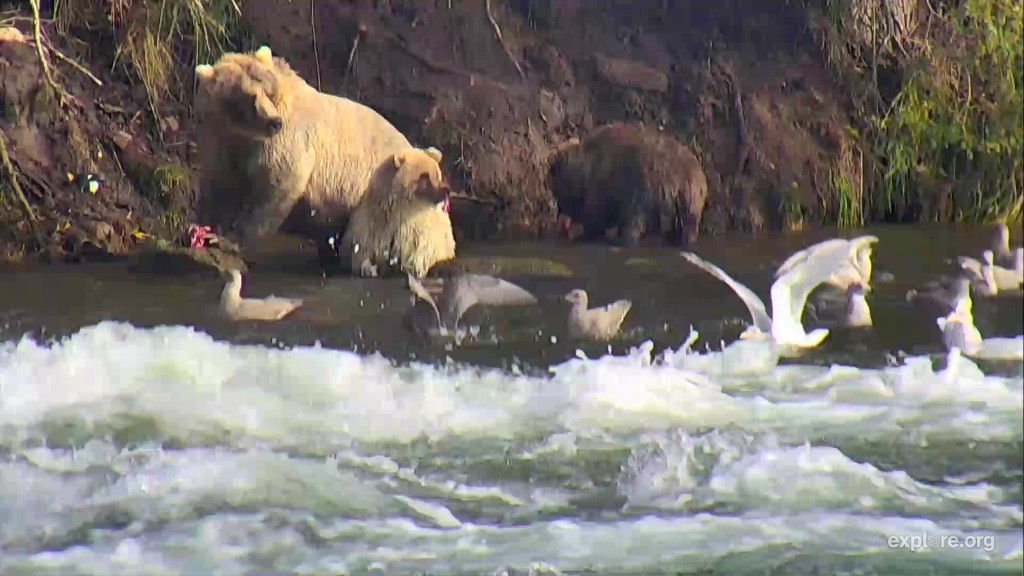 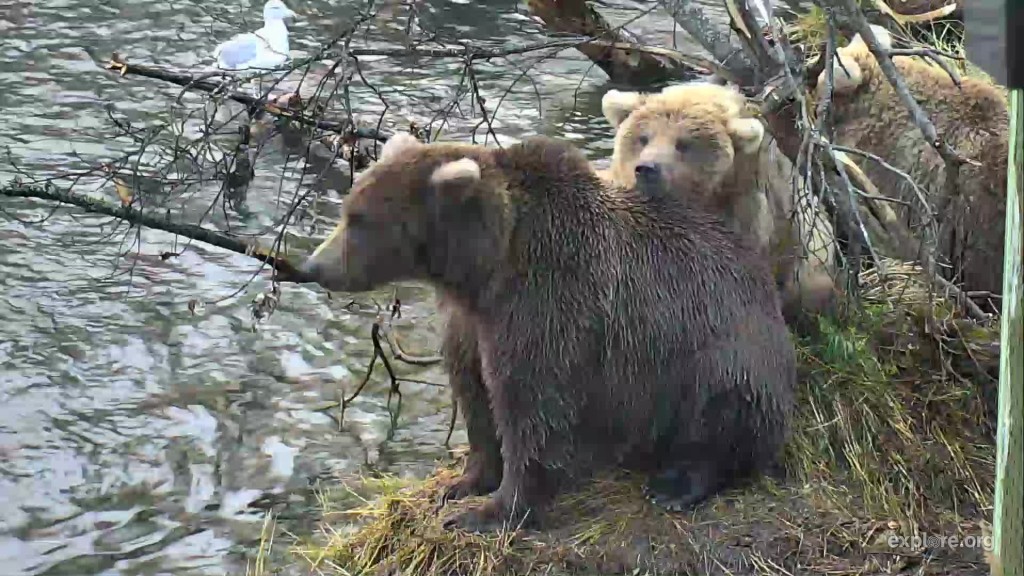 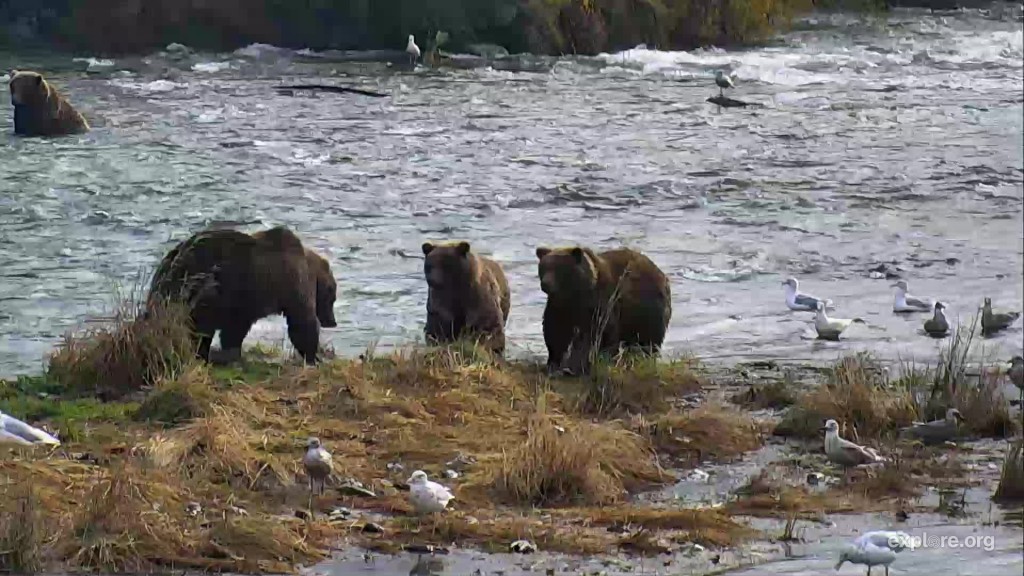 We also had quite a packed falls at the beginning of the week. Bear 83 Wayne Brother was in the Jacuzzi and actually had two bears begging from him at the same time, while bear 68 looked on. Video of the encounter can be seen here. 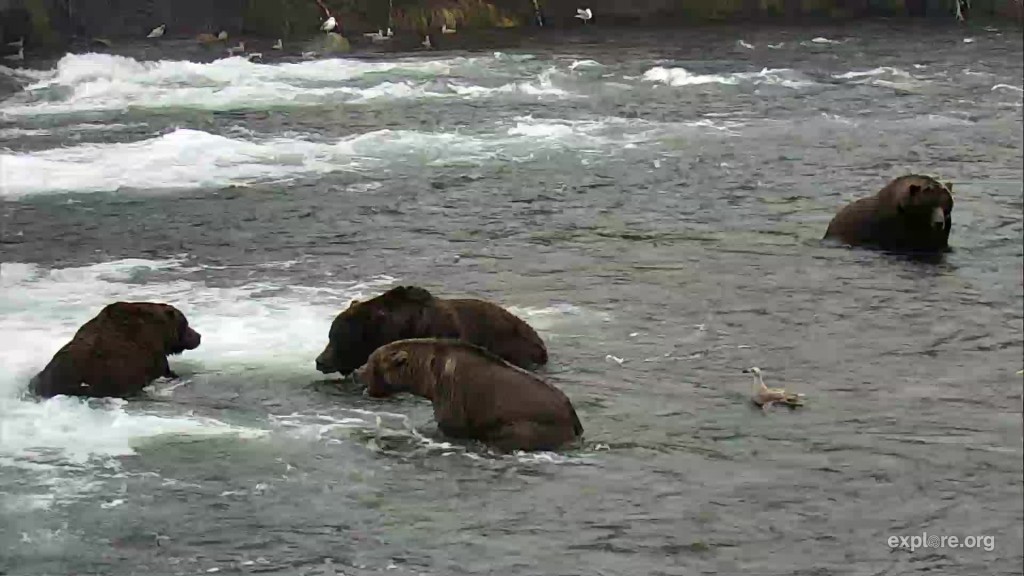 With October well underway many have wondered about when bears will start to den. Former Brooks Ranger Mike Fitz spoke about this in chat

“In brown bears, denning is most closely coupled with a metabolic slowdown. This a a process that takes weeks. The bears we see on the cams now are likely experience that shift. Some studies have documented bears entering dens during the onset of snowfall, but others haven’t. One recent study, and one that is the most comprehensive I ever read about what drives bears to den, found no correlation between ambient temperature and the bear’s body temperature or heart rate. The paper, “Drivers of hibernation in the brown bear,” is really fascinating if you get a chance to read it”

Mike also answered whether it had ever been documented that subadult bears dig a den and hibernate together. It doesn’t seem like it will be too surprising to find out if 503 and 719 decided to stay physically close to each other through the winter as they have been this summer?

“It’s rare, but sibling bears have been documented to hibernate together after they’ve been emancipated. However, since this is the second year 503 and 719 have been independent from 435, I suspect they’ll den separately.”

More about bear hibernation can be found here and here. Mike Fitz explored a bear den in 2013, video can be seen here. Here are a couple Katmai blogs about denning and hibernation, here and here.

Last week, we watched a Bald Eagle swoop down to the river and snatch some salmon leftovers.  This week we observed a Bald Eagle sitting on a tree branch over the river, presumably watching for an opportunity for a salmon meal.  The Eagle is not the only bird along Brooks River with that goal. We commonly see dozens of Glaucous-Winged gulls, a number of Magpies, and some Ravens all vying for scraps left from the Bears.  The Bald Eagle is also looking for easy scraps, but could also catch whole fish in the river.  We are often alerted to the presence of an Eagle by seeing the gulls rising from the river in frantic flight, making a lot of noise as the Eagle flies close by; the other birds, like the Magpies, would also likely take off.  This time, though, the tables appeared to be turned.  As we watched the Eagle sit near the top of the tree on bare branches, he was attacked by a couple of Magpies.  They dove towards the Eagle repeatedly, even making contact with the Eagle a few times.  For a while, the Eagle just ducked or turned aside, seeming to be undisturbed by the attack.  Why would much smaller birds seem to take the risk of attacking a resting raptor?  It’s not an uncommon behavior.

Smaller birds will often harass hawks and even owls. When there are many of them it is called mobbing.  It’s often an attempt to drive the large predatory raptor from nesting territory of the smaller birds.  In this case, nesting season would be over for the smaller birds as well as for the Eagles.  Now is appears more likely they are simply trying to drive the eagle away from their feeding territory both for their safety and to protect a food source.  The effort required for the Eagle to try to chase or capture one of the Magpies may not be worth it – especially in light of the plentiful salmon scraps. So how come the Eagle doesn’t just go fishing in a different part of the river?  Well, first, they’re bigger and they don’t have to….  And second, if they moved downriver they would just be in another Magpie’s territory.  This Eagle did eventually tire of the attack and fly off – maybe to a more protected branch. Video can be seen here. 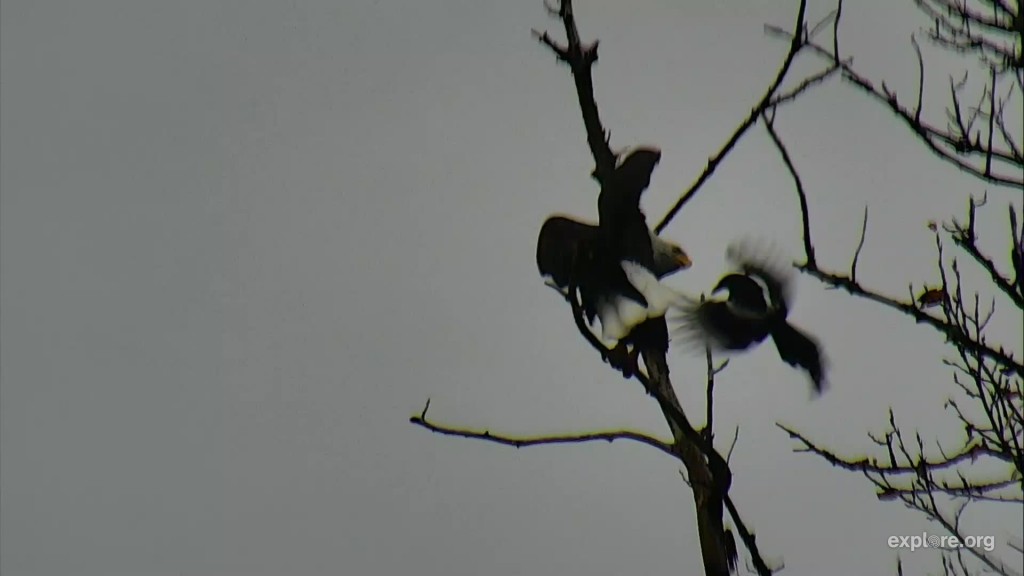 We also learned something about Glaucous winged gulls from Mike Fitz. You might have noticed gulls dunking their heads into the river, especially on the far bank. Mike explains what they are doing:

“Behind the large males sitting near the far pool, you’ll see gulls dipping their heads in the water like they are bobbing for apples. They, instead, are bobbing for salmon eggs. Stray eggs are washed into eddies and slack water areas in the river making easy picking for gulls. I don’t think you’ll see other animals catch eggs in the same way. The gulls are adept at the skill. Other birds in particular aren’t as precise with their bills. Mergansers dive underwater to catch food, for instance, and mallards dabble. They don’t typically target eggs like gulls, who love to scavenge eggs.” 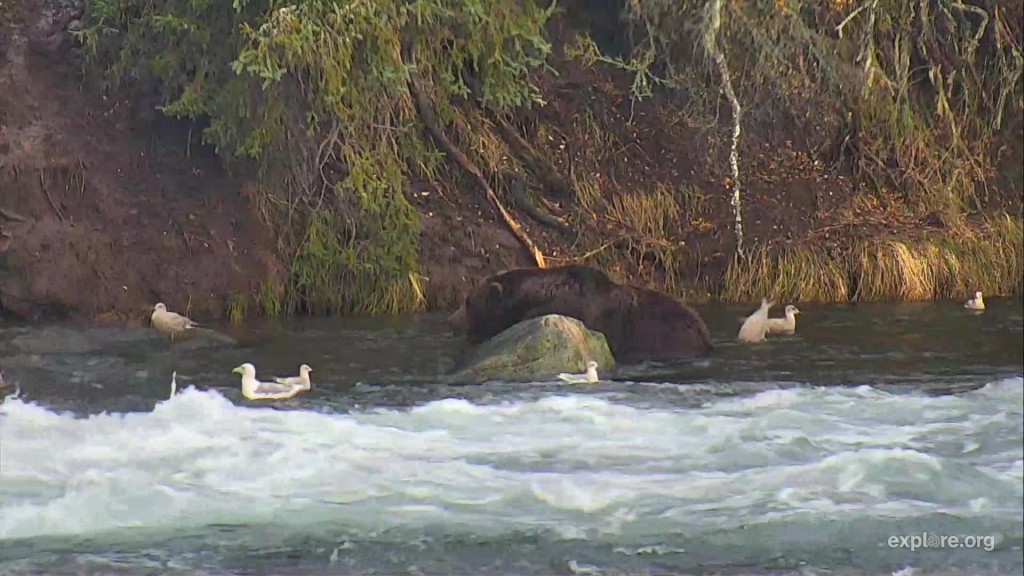 503 treated us with more of his water aerobics in the Jacuzzi and playing with other bears this week also. Many hope this wonderful bear never decides to grow up :). 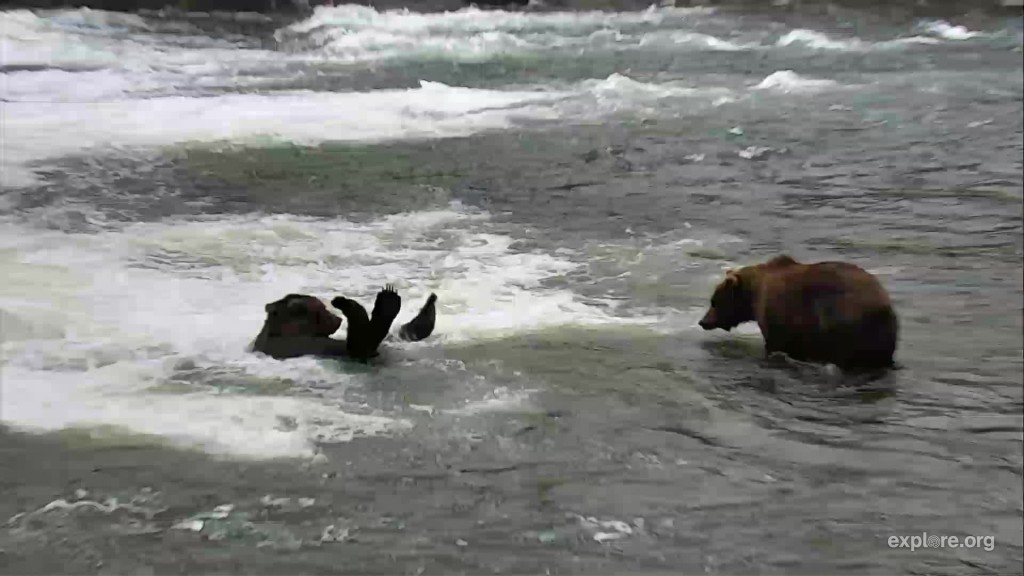 503 water aerobics in the Jacuzzi

This past week we also saw an injured bear at the falls. This is as of yet an unidentified bear. This bear was seen on two different days at the falls and has an injured front paw. The bear is unable to put weight on its right front paw. I asked Mike Fitz about whether this bear would be able to dig a den if the injury is not healed by then.

“I don’t know. However, a three-legged bear was seen at Denali National Park. This bear survived at least one winter, so based on that example and other injuries we’ve seen bears recover from, I would not be surprised if the injured subadult dug a den and successfully weathered the winter.” 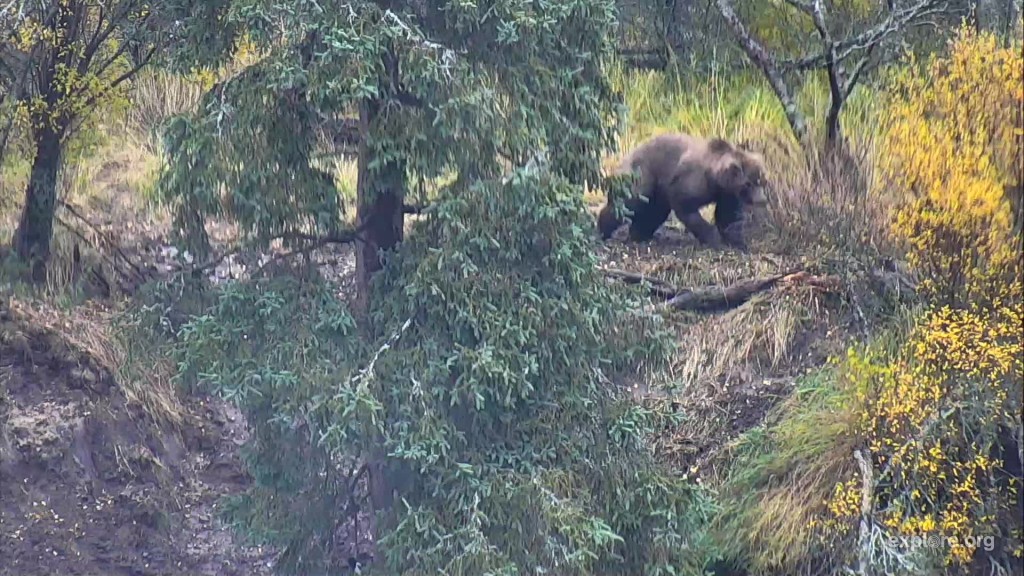 Despite the injury this bear was able to catch a salmon yesterday and seems to be well fed. Video of him/her catching the salmon can be seen here. 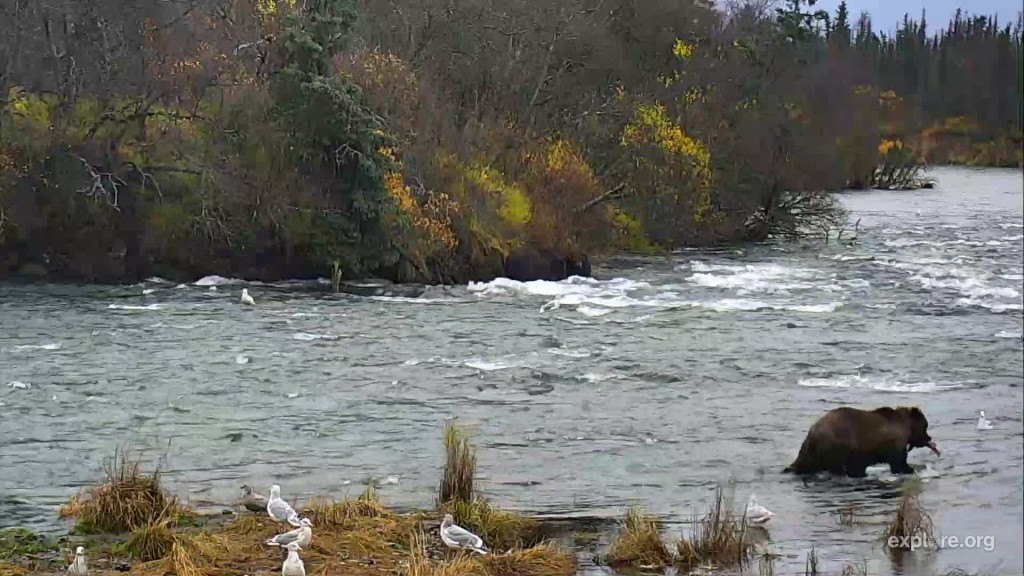 As the hours of daylight get shorter, we are hoping for more sunny days to power up the solar batteries and keep the Brooks Falls cam live since we are still seeing bears frequently there.  Explore reports that repairs on the Lower River cam issues will be started next week.  Fingers crossed for success!!