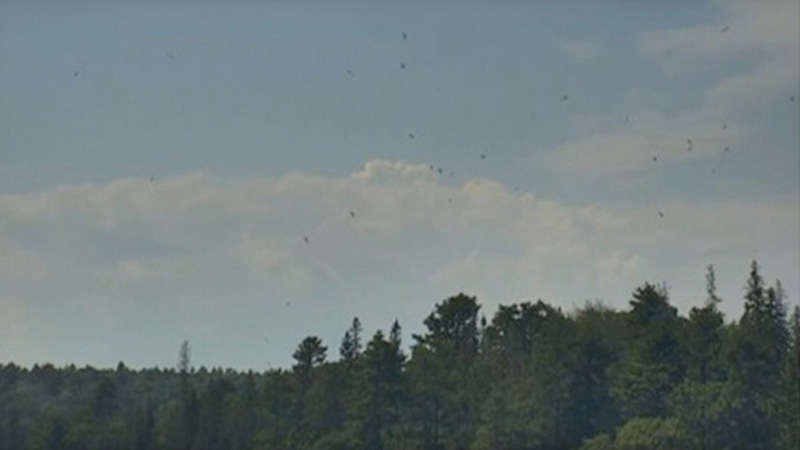 “Our” Bailey, Steve and Rachel’s only surviving chick from this season had a really tough time of it.  After both her siblings were killed by a Great Horned Owl, she had to endure an attack herself, and survived it because of the heroic persistence and protection of her mother, only to be attacked again and again by Rachel, who was beside herself after that rescue, screaming in the dark, then, with injured wing that no one knew the true extent of, she had to endure relentless stinging from wasps that had moved into the nest.  She’d reached her limit, and bravely jumped off the nest towards the tree next to it, but did not succeed and was sent tumbling to the ground.  She was found unharmed and moved to the Boathouse Nest where she was strafed by Mr. Boathouse and later on, attacked on 2 separate occasions by Mrs. Boathouse.  She was rescued by the Audubon Camp Manager, Eric, who’d built her her very own nest:  the Porthole Nest.  After all these ordeals, she was finally safe, and we all waited and kept praying and praying for her survival and eventual fledging.  So, when she did leave the nest for the first time during the late afternoon of 10th July, 2017, sadly, no one got to witness it because she took off from the “Porthole nest” where there is no camera.  However, the next day, she was spotted high atop a tree across the Bay, on the mainland.  We knew it was her because of the way she held her right wing; that was the one that got injured.  After some time, she took off and began to fly with such exhilaration.  It was as if she was celebrating the freedom of flight we can only dream about.  Soon, she was joined by Rachel and Steve, her incredible parents, and the three of them were followed by our cam op, Coqui, while we watched.

Then, something happened I’d never seen before with any of the fledges I’d been privileged to watch:  it was as if God and all those Holy Ones everyone had been praying ceaselessly to were celebrating with them:  first, there was the three of them, then a fourth, then six, then seven.  I’m snapping picture after picture, posting to the cam op as they go.  Then, I type: OMG!!!!!!  as I see the sky is FILLED with mostly Osprey, but there were Eagles and other birds as well.  The sky was dark with these large, majestic fliers.  It looked like the entire community had come out to celebrate.  Everyone just glided and soared, flapping and winging around; there were no scuffles, no skirmishes.  It was breathtaking.

I had already been cheering and my breath caught more than once, but when I saw this, my jaw dropped, and the tears just started falling.

That night, before I went to bed, I just had to share my thoughts about the event with the entire human community on the chat for Hog Island; we’d been through so much together over the years, with poems and prose and tears and cheers that I couldn’t let this go by without a word.  As I typed, the following came flowing forth, no pre-conception of what was to come:

I’m not on the cams now, but I wanted to share a couple of thoughts with my friends about today’s events.
I was watching when it happened,
Bailey high up in the tree;
Teetering as if on a pine needle,
But ever-steady she.
When she took again to the air,
And her parents followed suit
The tears of joy began to fall.
What exhilaration, watching her in celebration!
And earthbound, I watched, spellbound.

But then, the most amazing thing,
As if St. Francis and all the Saints were cheering,
The Community of Osprey joined in the revels,
Filling the air,
And my heart.”