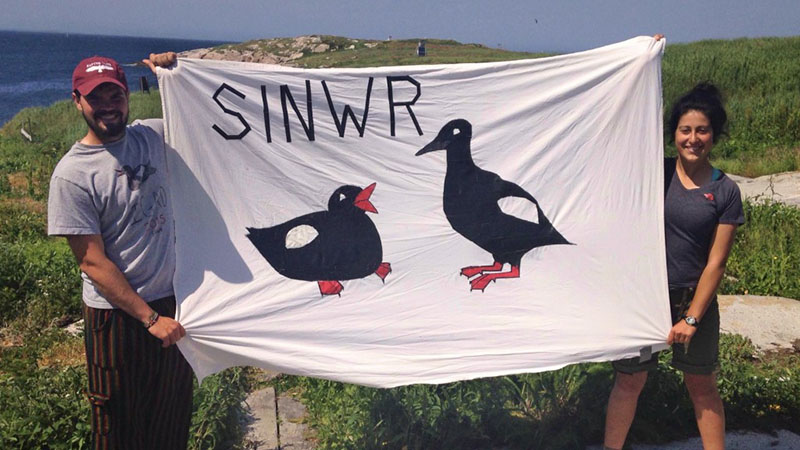 An International Holiday for an Underappreciated Seabird

The past week on Seal Island National Wildlife Refuge has been an exciting one for our smallest alcid, the Black Guillemot (Cepphus grylle). On Wednesday, June 29th, a cool, rainy morning, the Audubon Guillemot Burrow cam’s first chick pushed its way out of its egg and into the world. Like in the seasons before it, the guillemot cam has brought us new insights, surprises, and drama, from the curious case of the land snail snack, to the harrowing confrontation between a curious tern chick and one very protective guillemot parent. Now we are thrilled to once again have chicks on the guillemot cam!

Black Guillemots are usually the last to breed of all the nesting seabirds found here on Seal Island NWR, with eggs appearing by the end of May through early June, followed by chicks around a month later. These sleek, black and white seabirds nest in rocky crevasses all over the island. While their relatives the Atlantic Puffins nest deep in the rocks, guillemots tend to prefer a shallower and more accessible burrow. They are also unique to this family of seabirds because they lay two eggs rather than just one. Like puffins, guillemots often return to the same burrow each year and most pairs mate for life.

Summer staff and volunteers working with the National Audubon Society’s Seabird Restoration Program (aka Project Puffin) monitor around 40-50 Black Guillemot nests over the course of the summer until the chicks fledge (leave the nest) in August. About once a week, we scramble over the cliffs and boulders, peering into burrows with flashlights to determine whether the nests are active, how many eggs have been laid, and eventually, if there are chicks present. Once the chicks begin to hatch, we start weighing them and taking their wing measurements. All of this monitoring and measuring is essential to help us better understand how the chicks are growing and even provide insights into food availability and overall health of the colony. Eventually when the chicks are almost ready to fledge, we will band them with a metal ring engraved with a unique set of numbers that distinguishes them from all other banded guillemots in the world.

Guillemots may not have quite the popularity or publicity that puffins tend to enjoy, but we find other ways to show our admiration for this animated little seabird. In fact, they have their own unofficial holiday! Each year on June 27th, the Project Puffin research islands celebrate International Guillemot Appreciation Day or IGAD. It’s a day spent observing guillemots, photographing them, making guillemot themed crafts and baked goods, and even dressing up like guillemots! This year, the Seal Island NWR crew created a guillemot flag, which is now displayed proudly above the cabin. We also checked the guillemot burrows that we are following. After about 10 minutes of checking burrows, one of the interns shouted up from the rocky crevasse she was peering into, “WE’VE GOT CHICKS!” Sure enough, two tiny, jet black, fluff balls were huddled into the back of the burrow. By the end of the day we had found three more nests with newly hatched chicks, some only hours old. I knew in that moment that with the hatch well under way our guillemot cam chicks wouldn’t be far behind. I hope everyone will tune in this season as we begin our fascinating journey with this guillemot family!