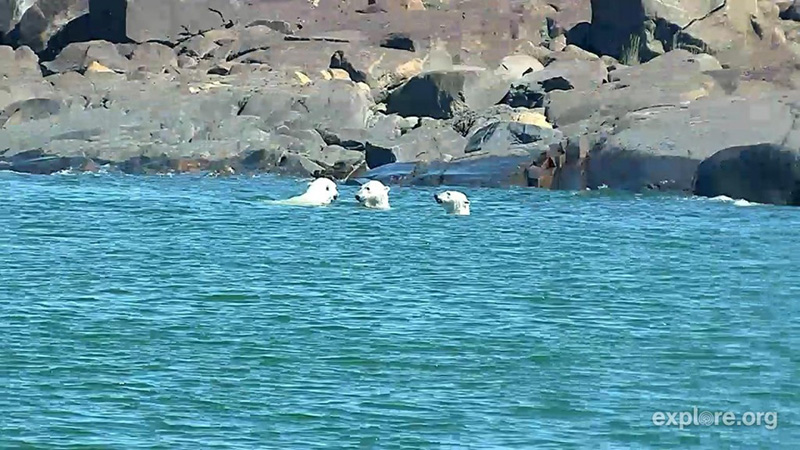 A Bounty of Belugas and Bears

Churchill is certainly the place to be if you are a tourist hoping to see the magnificent Arctic animals of the North. At this time of year here in Churchill, we call the summer Beluga season because of the thousands of Beluga whales who enter the Churchill River to give birth, feed on Capelin and go through their annual molt. Autumn is Polar Bear season. Presently visitors who either go out on a Tundra Buggy or perhaps on a boat to watch Beluga whales are seeing numerous polar bears! We know it is not officially bear season but it is incredibly exciting.

Recently the Beluga Boat ventured out into the Hudson Bay, rounded Eskimo Point in hope of seeing a bear lazing on the granite rocks. Instead we were astonished to see three Polar bears playfully sparring in the water, right next to the shore, whilst a fourth bear lay sleeping on the rocks just above them. Four bears in one look, not to mention the Belugas that were frequently coming to the surface to take their breath only meters away from where the bears were playing. It was literally a bounty of Belugas and bears in one single snapshot.

The water was calm, the sun was out and so we lingered there for quite some time. When we did finally depart and head back in to the Churchill River, I overheard a radio conversation. A bear needed escorting across the river from Cape Merry because it was too close to town and in an area frequently visited by people. Immediately Aidan and I spotted the bear making its way to the water’s edge just below the Cape Merry Battery, one of Parks Canada Historic sites. The bear, as if it knew exactly what we wanted it to do, stepped directly in to the water and aimed for the opposite shore of the river. As it swam leisurely along, we simply motored 100 meters behind it to make sure it maintained the desired course.

Once on the other side, the bear rose out from the river, shook the water off just as a dog would, then slowly meandered south in the opposite direction to the Prince of Wales Fort. It was a successful escort and we felt honoured to play a part in keeping not only the people of Churchill safe but the polar bear safe as well. Aidan, I, and all the viewers from all around the globe experienced Churchill at its very best on this fine summer day.