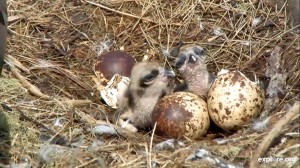 The Second Chick Has Hatched!

Early this morning, West Coast time, Rachel and Steve’s second egg hatched!  Our live cam caught the hatching at 6:45am PDT on June 6th. The final egg should hatch in the next 24-72 hours. They seem to be popping out and can’t wait to join the family in the nest! Watch it all on the Osprey Live Cam from Hog Island!

Did You Know? “The egg tooth is a small, sharp, cranial protuberance used by offspring to break or tear through the egg’s surface during hatching. It is present in most birds and reptiles…

Birds are different from most animals; at birth, they have an external protective covering consisting of calcium called a “shell.” The shell protects the chick until it is ready to survive in the outside world. The chick breaks open the shell when it is strong enough and ready. So the chick needs a device to break through this hard, protective covering. The beak and the claws of the bird are not fully developed and cannot penetrate the egg shell yet. The “egg tooth” is the unusual structure that helps the bird break through the shell. It is only found in emerging chicks and lost soon after hatching, after it is used to penetrate the hard shell that once protected the embryo.

In birds, the process of breaking open the eggshell is commonly referred to as pipping. Chicks have a pipping muscle on the back of their necks. It is this muscle which gives them the strength to force the egg tooth through the inner membrane of the eggshell.

When a chick becomes too large to absorb oxygen through the pores of its eggshell, it uses its egg tooth to peck a hole in the air sac located at the flat end of the egg. This sac provides a few hours worth of air, during which the chick breaks through the eggshell to the outside. The egg tooth falls off several days after hatching,” (Wiki).

Stay tuned for short video captures of the hatchings!