It was a calm morning at Mpala Research Centre and ascari (security guards) were roaming around the 48,000 acres of semi-arid savanna ecosystem doing their normal patrol. The Explore.org live cameras around the Hippo Pools were showing basking hippos, soaring birds, antelope and other wildlife. Then a message came into the centre that an ascari had spotted a limping Grevy’s zebra. The zebra had a snare caught around her leg and was accompanied by a baby. This alert set into motion the assembling of a veterinary team to treat the zebra and remove the snare.

Although it is illegal, sometimes people sneak onto conservancies to set up snares to catch bushmeat such as dik-dik or impala and this can sometimes lead to dangerous consequences with endangered wildlife getting caught as well. Dr. Maureen Kamau, the Smithsonian-Mpala Veterinarian Fellow, says that if snare injuries “go untreated, it can go onto cause bacterial infections that can be fatal, especially if they go unobserved or untreated.” Grevy’s zebra are highly endangered and one of the few healthy populations left in the wild are at Mpala and our home county of Laikipia. To learn more about Grevy’s see this archived live chat with researcher Dan Rubenstein. 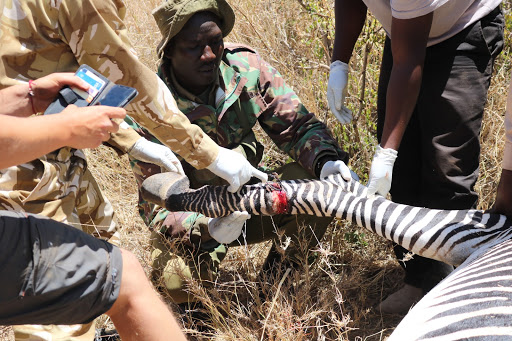 The team working efficiently to remove the snare in the Grevy’s Zebra’s leg. Throughout the surgery water was poured on the zebra periodically to keep her cool. Photo by Ciara Nutter.

An hour after the initial spotting of the injured Grevy’s zebra, a team of veterinarians from Mpala Research Centre, the Kenya Wildlife Service and the David Sheldrick Wildlife Trust assembled and were ready to get to work. The team drove to where the injured zebra was located, but the thicket was too dense to dart the zebra and remove the snare. So Dr. Dominic Mijele hopped onto the back of a boda boda (scooter) and drove down the ravine and through the thicket to dart the zebra. After the zebra was darted with an anesthetic, the team quickly descended and crossed the ravine to treat the zebra in its unconscious state. As a cohesive group, the team worked to unravel and cut out the metal snare, clean the wound, administer antibiotics and take blood samples. The reversal anesthetic was administered and the Grevy’s zebra gingerly got back up on its legs and walked away with its foal into the bush. 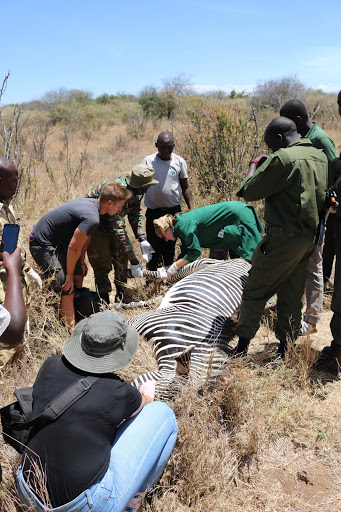 The veterinarian team attending to the Grevy’s zebra and collecting samples for health tests. Photo by Ciara Nutter.

A few weeks later, on another routine patrol, ascari found that the female Grevy’s zebra was no longer limping and instead was enjoying some grass with her baby. To learn more about the diets and behaviour of this endangered species and other wildlife seen on the cams, visit the MpalaLive! comprehensive field guide.

The treatment of the zebra’s injury went smoothly due to the combined efforts and communication among security guards, veterinarians and researchers. This continued teamwork represents the stewardship needed for taking care of and treating the thousands of wild creatures that roam Mpala.