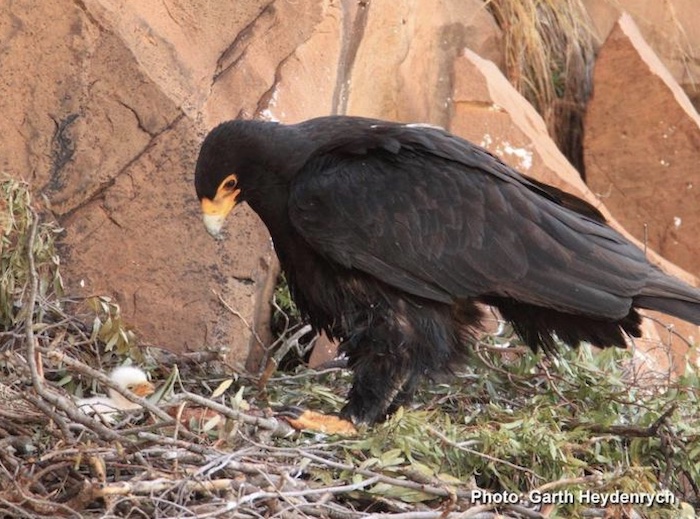 Siblicide: An Inextricable Behavior in Birds?

Watching unfiltered footage of wild animals on explore.org means that we’ll inevitably witness nature’s harsh realities. Bears strip the skin off of living salmon. Lions subdue zebras. A python snares an unsuspecting bird from its perch. Falcons fight for nesting territories. Ravens pillage an unoccupied eagle nest. Although these events can be difficult to watch, the reasons for them are typically clear. Hunger and reproduction are powerful motivators. Other behaviors and situations, though, challenge our best available science as well as our sensibilities of right and wrong.

A bird nest is a dichotomous place of nurturing and conflict. Parents care for their vulnerable young, while chicks compete for food and space. The competition in a bird nest can manifest in ways far beyond the times when my brother, sister, and I fought over the last cookie.

An extreme form of sibling rivalry at a bird nest may lead to siblicide. Also called Cainism after the biblical story of Cain and Abel, siblicide occurs when a nestling’s behavior leads to the death of one or more of its siblings through starvation, physical injury, or eviction from the nest. While siblicide is not common among birds overall, it does happen in a wide variety of birds. It’s documented in the osprey, shoebill, southern ground hornbill, white-bellied swiftlet, blue-throated bee-eater, and blue-footed booby as well as certain species of cranes, eagles, egrets, hawks, herons, guillemots, gulls, owls, pelicans, penguins, and vultures.

Siblicide in birds often occurs as soon as a larger or more aggressive nestling gains the size, strength, and weaponry (such as a sharp beak) to cause significant harm to its younger and smaller nest mate(s). On explore.org we’ll likely witness it on the webcam that features the African black (Verreaux’s) eagle nest in South Africa, and it is possible that we could see it at the cams of great blue heron, osprey, black guillemont, and bald eagle nests in North America. But, there are differences in how it occurs. African black eagles experience obligate siblicide: two eggs are laid, they hatch at different times, and the older chick always kills its younger sibling. In contrast, siblicide is facultative in herons and osprey: it is circumstantial and doesn’t always occur.

Many organisms including humans make overt efforts to help ensure the survival of related individuals. This trait isn’t universal, though. At best, many more organisms behave indifferently to their siblings’ survival. Others take a more aggressive stance. Certain species of sharks attack and eat their siblings in the womb.

If siblicide was maladaptive, if it failed to provide survival benefits in the near or long term, especially if an alternate life history strategy such as cooperation among nestlings led to higher survival and reproductive rates, then those with the siblicidal trait might eventually have their genes winnowed from the population or species. Yet since siblicide persists, then scientists—or at least my interpretation of their conclusions—have operated under the assumption that siblicide, especially obligate variation, provides some sort of benefit that leads to reproductive success for the individuals that practice it.

During the last few decades, scientists have hypothesized many potential explanations for siblicide in birds. Maybe the only thing we know for sure is that there are certain factors that make it more likely to happen, although none appear to be universal. Among birds, siblicide is correlated with large body size at maturity, complex hunting and foraging behaviors, a protracted period of learning in early life, and a slow life history pace (that is, you live a long time and have a low reproductive rate). In addition, siblicidal bird species are more likely to have a long nestling period and effective weaponry at a young age such as a sharp bill. Regarding the nesting period, consider that American robins (a species with no documented siblicide) leave the nest about 14 days after hatching, while the African black eagle doesn’t fledge for 95 days or longer. The nests of many siblicidal species usually offer limited escape possibilities too. A mallard duckling spends relatively little time in its nest after hatching and its ability to move and feed independently allows it to easily avoid a pushy sibling, unlike a heron chick that remains in a nest high in a tree for weeks after hatching. Additionally, if the species practices asynchronous hatching, then the older, first-hatched chick has a head start on growth and those few days can make a tremendous difference. A mother Canada goose may lay many eggs, but she does not start incubating until the entire clutch is laid and all of her eggs hatch at about the same time. In contrast, a female African black eagle begins to incubate her first egg immediately even though she usually lays a second egg three or four days later. As a result, her first chick hatches several days before the second. When the second chick hatches, the older black eagle chick uses its strongly hooked beak to attack its younger, vulnerable sibling. In More than Kin, Less than Kind: The Evolution of Family Conflict, biologist Douglas Mock notes a case when an older African black eagle chick attacked its nest mate within a few hours of its sibling hatching. The younger chick died three days after hatching and weighed 18 grams less than when it hatched due to the repeated attacks and food monopolization from its older sibling.

Perhaps unsurprisingly, food availability and hunger play an important role, especially in species with facultative siblicide. If the parents deliver food in large parcels, then the older or stronger chicks may be able to monopolize the food to the detriment of their siblings. If the parents feed their chicks infrequently and food transfer between feedings is slow, then an older or stronger chick can also interfere with the feeding of its sibling.

Competition for food can become more intense as chicks grow. But, sufficient food can also allow younger or smaller chicks with the fortitude and energy to withstand and survive the aggression of their nest mates. One study on great egrets found that the amount of food had little direct influence on fighting behavior between siblings, though it consistently influenced chick survival. When scientists provisioned a great egret nest in Texas with extra food they found that nest mates didn’t reduce their aggression toward each other, but more chicks to survive to fledge.

There may be other factors that influence siblicide as well. One idea, for example, posits that some chicks may be more vulnerable to parasites. These infestations might leave a chick in a weakened state where it cannot withstand the aggression of its nest mates.

As species with facultative siblicide demonstrate, all nestlings can survive when circumstances allow. Parent birds are often great hunters and select their nesting territories well, which makes obligate siblicide perplexing. Food is not always in short supply for young (less than one week-old) African black eagle chicks. So if “Cain” is always going to kill “Abel,” then what’s the point of laying a second egg? Perhaps obligate siblicide evolved in anticipation of food shortages later in the nesting period or maybe there are other, stronger reasons. After all, natural selection operates on a continuum of scales.

For a mother African black eagle the energetic cost of laying a second egg is relatively small, but the payout could be huge—at least in terms of reproductive success—if something happens to the first egg. In this way, a black eagle’s second egg might serve as an insurance premium of sorts. An independent analysis of one chick mortality study in African black eagles found that about one in five of the second-to-hatch chicks survived to fledge. In fact, “Abel” survived to fledge at the Black Eagle Project’s Roodekrans nest, where explore.org now has a webcam, in 2005 and 2006 after the first egg failed to hatch. Although the probability of the second egg surviving remains low, it still may offer just enough of a reproductive reward to ensure the effort of laying a second egg, even if sibling aggression will lead an older chick to kill its nest mate in most instances.

I offer this information knowing that it won’t make siblicide any easier for many of us to witness. It is appropriate and natural to feel for animals and empathize with their struggles. Siblicide is often difficult if not disturbing to watch, so always remember that it is also okay to take a break from the cams or watch a camera that focuses mostly on scenery rather than wildlife when things get unpleasant.

The diversity of survival strategies among wild animals, though, serves as a never-ending point of fascination for me and I hope you as well. I wasn’t always the best brother to my younger siblings when I was a kid, but I was vested in their welfare. So something like siblicide in birds seems so out of the ordinary to feel alien. However, rather than judging whether it is right or wrong, I see it as something different, something outside of human ethics, a behavior that has purpose for the animals that experience it. Although siblicide in certain species of birds seems to have evolved to benefit survival, it remains a behavior that provokes our discomfort and is difficult for science to reconcile.