The Courtship: From Arrival to the first Egg

At the beginning of this year, I suggested and announced the Big Fish Delivery Challenge: extending our fish count from Hog Island’s nest to all osprey nests on Explore.org, namely the Audubon Boathouse nest, the Charlo, Montana nest and the Chesapeake Conservancy’s nest. 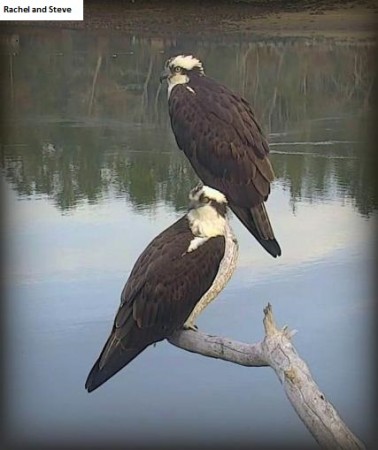 Since all HI nest watchers are faithful fish delivery reporters, it was essential to convince chat friends from all other nests to chime in. And they did! Special thanks go to Barbara, RknRbn, and Sunnie Day on Charlo’s chat and to Uta on Chesapeake’s chat. I couldn’t have done it without you and all the other chat friends!

The season started out to be a promising one. All ospreys returned to their nests, according to their individual schedules. We were able—with much help from Nutty][Wingnut—to ID Mr. and Mrs. Boathouse (later named Dottie and Doug) as the same couple that started to build the nest in spring 2016.

Courtship began: Sky-dancing to attract the females’ attention, preparing the nest for the eggs, delivering fish to the female and starting with mating attempts. All these activities are essential. The more diligent the male osprey is, the quicker the female is ready for copulation—the real thing.

Following our nests, the courtship takes on average 16 to 17 days. After that period, the first egg is laid. Young couples’ courtship seems to take much longer. They have to build up the hormone level to produce sperms and ovum. It took Dottie and Doug 32 days of courtship until Dottie laid her first egg. Audrey on Chesapeake’s nest laid her first egg after 17 days of courtship, Charlotte at Charlo’s after 16 days and Rachel on the HI nest after 15 days—the shortest courtship ever, since we began monitoring the nest. Obviously a sign that Rachel and Steve are well attuned.

But now to the real thing, the first results of the Big Fish Delivery Challenge. Over the next couple of weeks I will supply the gathered data with interpretation.

As said earlier, the courtship takes about 16 to 17 days on average. Dottie and Doug took twice as much time, definitely an indication that this couple is young and inexperienced. Their reproductive organs are still developing. The hormone levels need to rise and get synchronized to build sperms and ovum to produce fertilized eggs. 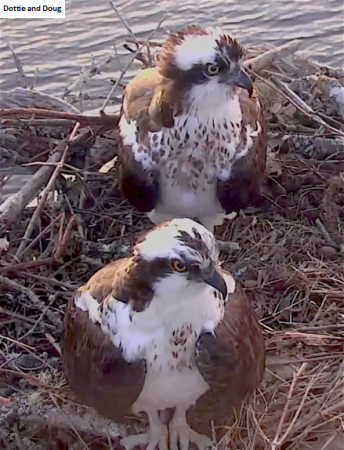 The number of delivered fish lies pretty much in the regular range. Adult ospreys feed on 1 to 2 fish per day, depending on the size of the fish. Charlo’s nest seems to be an exception. Is Charlotte especially hungry, even greedy? No, not at all! Unlike Tom, Doug and Steve, Charlie is eating his share of the catch right in front of our eyes, on the perch beside the nest. The other male ospreys eat out of our sight, roosted in nearby trees or on the dock.

Another indicator that Dottie and Doug are new to the family building business might be the fact that Dottie accepted fish deliveries from another suitor. Two deliveries during the courtship were made by another male. Well, she still seemed to check her options.

In general, all deliveries are made by the male during the courtship, while the female is (re-)arranging the nest material her mate delivered to the nest as well. And she is defending her nest from other ospreys that are still looking for a suitable nest to stay and to build their own family. It appears that the fights over nesting sites increased this season. We saw that on many different osprey cams. Selected awareness? An increasing number of osprey cams as windows into their daily lives? Not according to osprey expert Dr. Rob Bierregaard: “I think the intruder aggression is probably standard behavior in populations that are approaching saturation levels. Paul Spitzer has reported that in the growing population after the DDT ban, when there were lots of nests available and not many Ospreys using them, the average age that Ospreys started nesting was between 3 and 4. In more crowded situations down on the Chesapeake, the average age at first breeding was over 5 yrs old. So there are lots of young birds looking for a breeding opportunity and some are not waiting politely. Intruders will be both males and females. One of the Chesapeake Bay birds I tagged a few years ago (Crabby) was an intruding female at an established nest. The year after we tagged her she found a mate and nested near where we trapped her.”

The Brooding: From the first Egg to Hatch

Our male ospreys’ courtship ended with the arrival of the first egg on our monitored nests.

Audrey on Chesapeake’s nest made the start, since the couple arrived a month earlier at their nest on March 21 (Audrey) and March 25 (Tom), compared to our other monitored couples. Their eggs were laid on April 12, April 15 and April 18. Eggs # 2 and 3 came in the afternoon about 70 hours apart, the first one when the camera was off air.

Charlotte’s eggs at Charlo/Montana arrived at the beginning of May on May 2, May 5 and the last one on May 8. Charlotte followed the pattern of her fellow osprey mums. All eggs were laid in the afternoon, between 70 and 71 hours apart from each other. 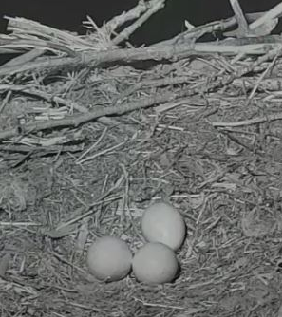 As mentioned above, Dottie and Doug are “newlyweds” and needed a bit more time to bond. They arrived around the same time on their Audubon Boathouse nest as Rachel and Steve on Hog Island but their eggs were laid a month after arrival on May 12 and five days later on May 17. It was an afternoon delivery as well. Unfortunately, egg # 2 cracked immediately right after it was laid. Maybe this was another hint that the processes in her reproduction system weren’t well tuned yet. The fact that the first egg is still intact in the nest (in December!) might indicate that the shell is quite thick and needed much calcium, to the disadvantage of egg # 2. It seemed to have a much thinner shell. Please note that these are just my interpretations, since neither egg nor shells were examined.

During the brooding, all male ospreys nudged their mates—more or less impatiently—to take a rest from sitting on the eggs. All were eager to take over nest duties. Well, Doug still had some room for improvement, but he was new to the business. 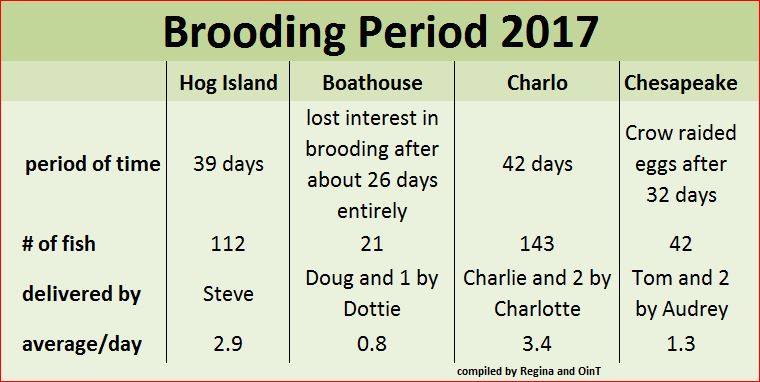 But now to the fish deliveries for our osprey ladies. It is the males’ duty to deliver provisions to their brooding mates. However, we can assume that the females do not only stretch their wings while the mate is caring for the eggs. They might fish for themselves as well, but eat out of our view, most of the time. Audrey and Charlotte showed up twice with their own catch back on the nest, Dottie once, during the brooding period of roughly 38 days.

Steve increased his deliveries by about 30 % compared to the courtship period, Doug’s deliveries decreased from 1.1 fish per day during courtship to 0.8 fish, Charlie’s from 4.4 to 3.4 fish and, finally Tom’s from 1.6 to 1.3 per day on average. Please, note that we only can count fish that were delivered to the nest. Both the male and female osprey might have caught and eaten fish out of the camera range.

Since the habitats of our nests are completely different, except for the two Audubon nests, the fish species on the menu are different as well.

Audrey and Tom’s nest is further south, in Maryland. Their realm is the estuarine, often brackish waters of the Chesapeake Bay. Their menu consisted of American shad, white perch, alewives, striped bass, largemouth bass, and menhaden. 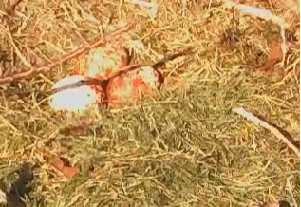 A fish species that was seen quite frequently on all nests this season was the USO—Unidentified Swimming Object. Since the Charlo and Chesapeake’s cams are stationary and unable to zoom, it often was hard to make a proper identification. In addition, our birds aren’t always cooperative, showing us their prey. We have to work on that with them. Discussions about identification on the chat and behind the scenes are often intense. Thanks, again, to all who contributed to it.